First port of call this morning had to be a supermarket. We need a few supplies and yesterday's trip to Lidl's totally failed to source them. There's a huge Auchan not too far off our route. That must be good.

Problem #1 - Satnav wants to go a different way from the route Liz thinks optimum. Radically different in fact, it wants me to turn left out of the campsite, Liz is for turning right. Right it is then. About a quarter mile later Liz's route requires a right turn, I'm concentrating on city traffic, and lanes so miss the sign that causes Liz to say, "Oh rats you can't turn right there, go on to the next junction", "Rats, you can't turn here either" (the astute reader may have recognised the Bowdlerised paraphrasing there!). All the time, this is to the backdrop of Mistress Satnav chiming "Turn around when possible" every 30 seconds. Liz concedes defeat and I struggle to find a side road appropriate to allow a U-turn. Manouevre completed and we return to see cars turning into the forbidden roads, it's then Liz realises the no turn signs have a small height indication below them and we would actually have been OK. Rats indeed!

On to Auchan and problem #2. It's huge and there are upper and lower level parking levels. I elect for lower and am on a one-way road with a 1.8m barrier in front of me. To be fair Liz did suggested immediately reversing out before I got too far but I blithely continue and have a three point turn and drive the wrong way up the entrance ramp to escape. At this point I espy a closed tyre place and head for its sanctuary to take a look at the lie of the land. There's a height barrier in the upper level too. It looks higher than 1.8m and almost certainly higher than the van but looks can be deceiving.

Remember just 10 minutes previously our problems were from miniscule height indicators under the no right turn signs. Now the problem is a complete lack of height indicators at all, OK once you are committed to the lower barrier you discover it is 1.8m but there is nothing at all on the upper one.

The tyre place is small so I get to practice my 3-point turns again. To be precise it's only the second such manouevre of the day, the first U-turn in the side-street was technically a 7-point turn.

Eventually we work out how to get to the exit and Liz navigates us to the other side of the store. Now the is not just a couple of right turns to go round the store, it's part of some huge out of town shopping complex and requires several streets and one confusing junction before we finally head into Auchan from the other direction - to be confronted by upper and lower parking areas with height barriers. I think at this stage I may have made some association between France and coitus!

Fortunately this time the upper barrier did have a height indicator, 2.8m, a whole 50cm to spare.

We parked. We cursed. We shopped.
Auchan, being a huge hypermarket chain ought be the cheapest place around for
fuel but it's still over €1.20 so half a tank will suffice.

And France, OK I understand the need to stop the erosion of your language by US English and so if you must call "diesel" "gazole" then fair enough (although subtitles for the rest of the world that uses "diesel" wouldn't go amiss) but come on, everyone else in Europe uses a black hose at the pump not yellow. Perhaps despite this Brexit nonsense I should collar my local MEP and get him/her to take a motion on the standardisation of fuel line colours. Of course, you'd probably win and everyone else in the EU would have to change to yellow, just to match you. Perhaps I shouldn't raise it with my MEP, I'd be responsible for early cardiac failure in too many Daily Mail readers!

Getting out of Strasbourg wasn't too bad and the journey OK until problem #3 we got stuck behind a combine harvester which was stuck in road works. A bridge was closed to one lane, and there was a lot of large lorries in the opposite direction. The combine had made it to the lights and was now blocking part of the opposite lane making it difficult for the largest lorries coming from the opposite direction. But until they cleared the combine couldn't make progress itself. So several light changes went by before we were eventually free of the roadworks only to be stuck behind a 15mph max combine for several miles. A couple of cars in front did get past but we were a few cars back and most of the road was solid white line for miles.

It's been a slow morning.

We leave France and at Saarbrucken find ourselves back in Germany. Fuel prices plummet, diesel is now down below €1.10 and (once again) I curse having put as much as half a tank in at Auchan, as it's not worth stopping.

We remain in Germany pretty much up to the Luxembourg border. Saarland and it's heavy industry is interesting. Huge factories and enormous barges in the adjacent canal/river. Would have been nice to have stopped and taken some industrial photos.

We cross into Luxembourg and as soon as we pull off the motorway the road is one long line of petrol stations on both sides all offering diesel at €1.01. Obviously Luxembourg has the lowest fuel tax in Europe. There's also an alcohol shop which suggests this might be a good country to stock up on beer and spirits too.

The campsite is 5 miles further on just off the main road. Interesting. Very formal, we are given a set of the 16 campsite rules we are to follow. Several places remind us to vacate our space and ensure its tidiness no later than 10:30 in the day of departure. Our receipt is handwritten. Must check if it is signed and so a valid legal document should we wish to take it to a public notary. Most strange, but the site is pleasant enough, there's a good supermarket half a mile away (we know because we visited it), a restaurant and bus stops a couple of hundred metres away. Good clean loos and showers (showers unavailable from 10:30 to 14:00 and 22:00 to 06:00). Makes one wish for a laid-back country like Germany!

No pictures today, just the route 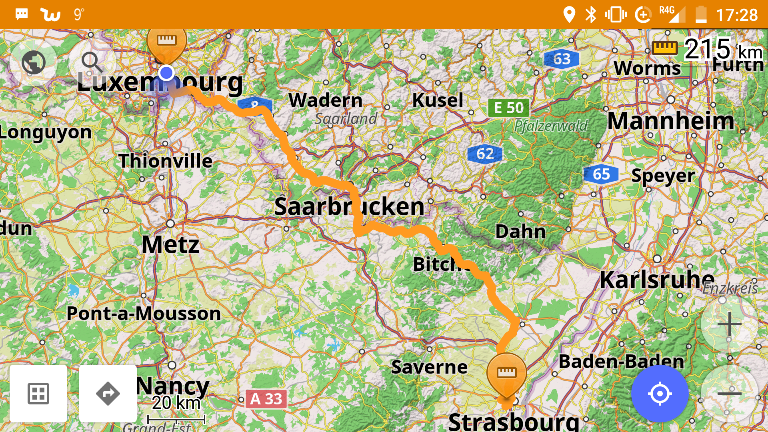 Luxembourg is an interesting city. It's easy to see why the city was such a formidable bastion in mediaeval times. It's built above a gorge some 60m deep. It doesn't look it from

Dunno what dance we did, to what weather god but it was definitely the right one. The forecast for today was wet and we even envisaged it being our second only day this

Two Drifters
—
Back and forth in France
Share this