No pictures and a short blog today.

Schull was a pleasant base last night and this morning's hot shower welcomed even though the edge has gone off the heat a little.

I'm sure readers are aware of the great potato blight of 1845-9 with the subsequent famine killing well over a million poor souls through starvation or disease. Add to that the couple of million or so that emigrated and those that never reached the destination of the coffin ships that they embarked on. We use the word 'devastated' so lightly these days, but such was the devastation of Ireland that now, 170 years on, Ireland is the only country in Europe whose population is less that that of 1840.

West Cork was one of the worst hit areas, and if any place name is synonymous with the famine it is Skibbereen, 40 miles or so west of Cork. In one of its graveyards Abbeystrowry 8-10,000 bodies are buried in an mass grave. And that's only one of several graveyards in the area.

It's hard to imagine a single food diet. But much of Ireland was totally dependent on the potato. For many families it was their sole food apart from maybe a once a month luxury of meat or fish, less often in many cases. Working men ate up to 14lbs of potatoes a day! Yes, about 70 potatoes. And that's just the man of the house. A normal family could be eating in excess of 40lbs of potatoes daily.

The blight was unexpected and catastrophic. Skibbereen has a well laid out museum dedicated to those tragic years. Lots of interactive displays. Curiously the museum also hosts a feature on the nearby saltwater Lough Hyne.

The town itself is pleasant although we do take exception at height barriers to the town's main car park. Height barriers feature more here down south. There are major contribution works in the supermarket car park, the town is pretty traffic congested (mainly because of all the kerbside parking) so it's dust and noisy.

On to Clonakilty for coffee then. A similar sized town, it's claim to fame is that it was the birthplace of Michael Collins, probably the best known of the 20th century independence fighters. Also I read somewhere that its black pudding is also famous. Perhaps its third claim to fame should be the world's most expensive lemon meringue pie. Had Liz and I been aware of the €5.60 price tag we may have opted for humbler fare like apple cake.

Not sure where to sleep tonight. Britstops has an Aire at Bandon but it's not on my Irish listing and seems to have few mentions on the internet since 2013. We drive by anyway and decide whatever its situation we won't stop. Too noisy.

We want to go to Cork tomorrow so the most convenient place is Blarney campsite. A nice site, 1.5 miles out of town and although €25 sounds expensive that includes electric, WiFi and showers. So not too bad.

Now, we often see signs in pubs saying "Best Pint Of Guinness In Town/The-Area/The-County/Ireland" but, to my mind a keg beer like Guinness is, pretty much the same everywhere. I am disavowed of this belief tonight. Across from the campsite is a fairly upmarket restaurant that also has a late night bar. At 9:30 we are the only ones in and I have the worst pint of Guinness I've drunk. It's not that it's off, it just has a sweetness that shouldn't be there. Weird! 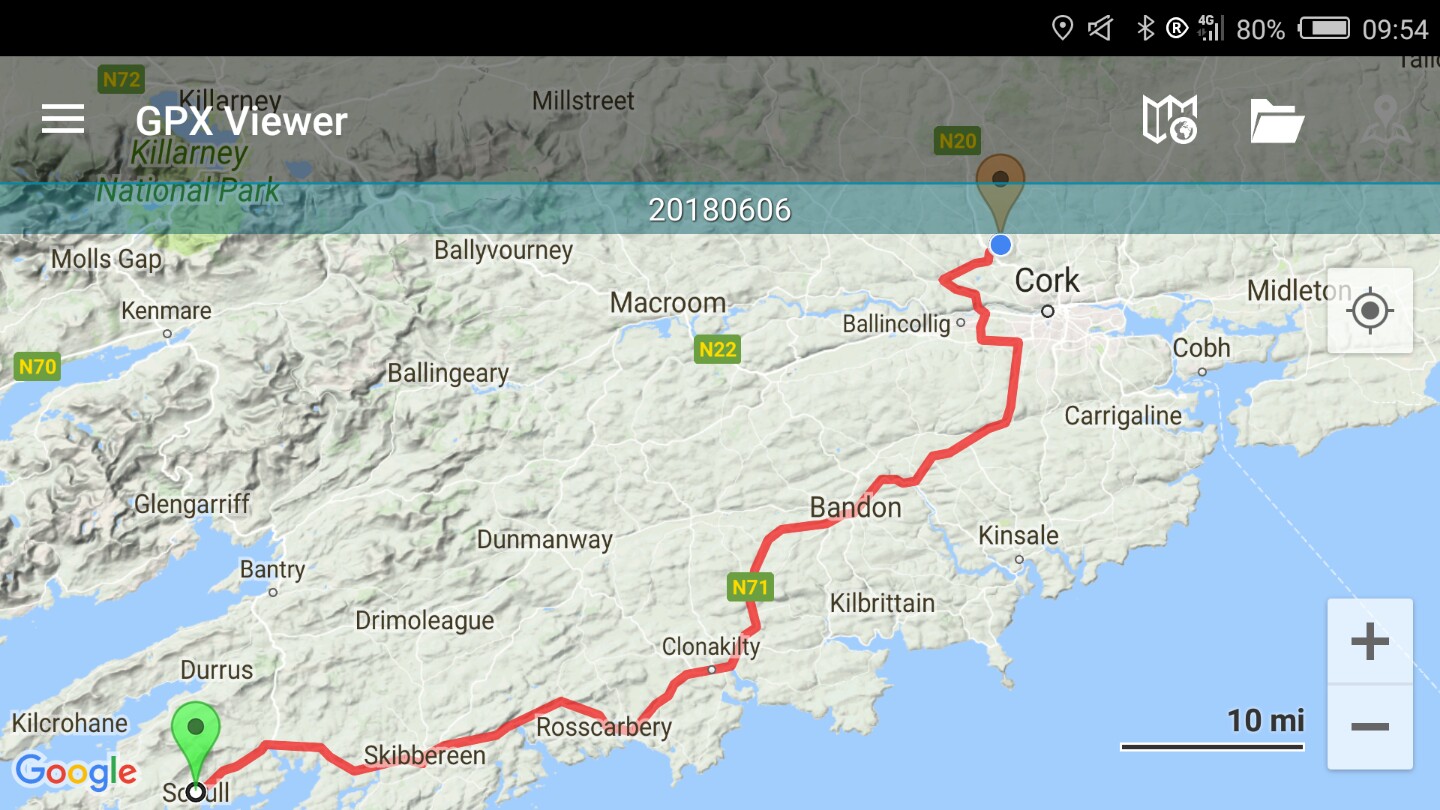 Cork beckons. It's a mile and a half walk down into Blarney itself to catch the bus into Cork, and the 30 minute journey is just €2.70 single. No, I've probably ranted

As I said yesterday, Bantry Marina pricing was a little uncertain. I thought we'd be charged €20 as an overnighting motorhome (despite the fact we used no electricity of other facilities). There ought