We all saw the violence that erupted on the Belfast streets in the 70s, 80s and in into the 90s. Some may even have been touched by it closer to home as IRA bombers targeted the UK mainland. But I suspect few of us understood it. I certainly didn't. Why wasn't Ireland united back in the 20s? Who was King Billy and why was The Battle Of The Boyne so important? What on earth is all this marching season stuff about? But the one over-arching question, why can't they just get together and sort themselves out. If it is religion that's dividing the communities, for goodness sake they're both Christian. If it's nationalism then why don't the NI folk just simply unify with the South?

Even asking those questions reveals my total and utter ignorance and misunderstanding of the situation. That became apparently clear today. We walked down the loyalist Shankhill Road, along the peace lines and up republican Falls Road. Just 20 years ago such a gentle amble in the sunshine would have been unthought of. Battle hardened war correspondents, covered in Kevlar body armour wouldn't have considered it! I'm not the biggest fan of Tony Blair but if the British side of the story is to be believed he and Mo Molem worked a miracle pulling together the Good Friday Agreement. I added that caveat as over here most of the credit seems to be heaped on Bill Clinton.

Just to put this into perspective here are some of the murals. These are not 20 year old political statement left up for us tourists to gawk at but seem to be new, fresh and possibly, worryingly, reflecting current political stances.

Some photos to illustrate my point. 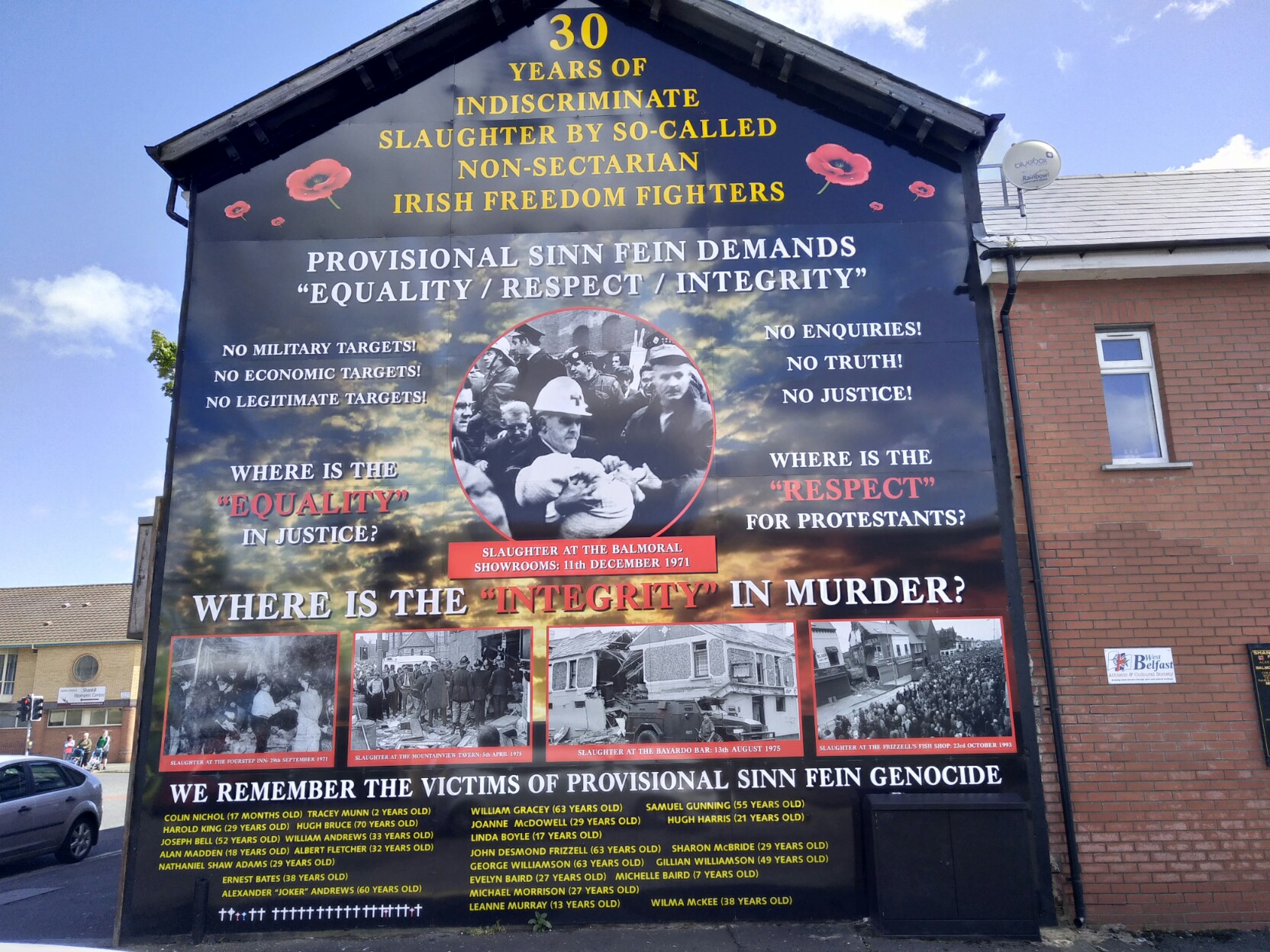 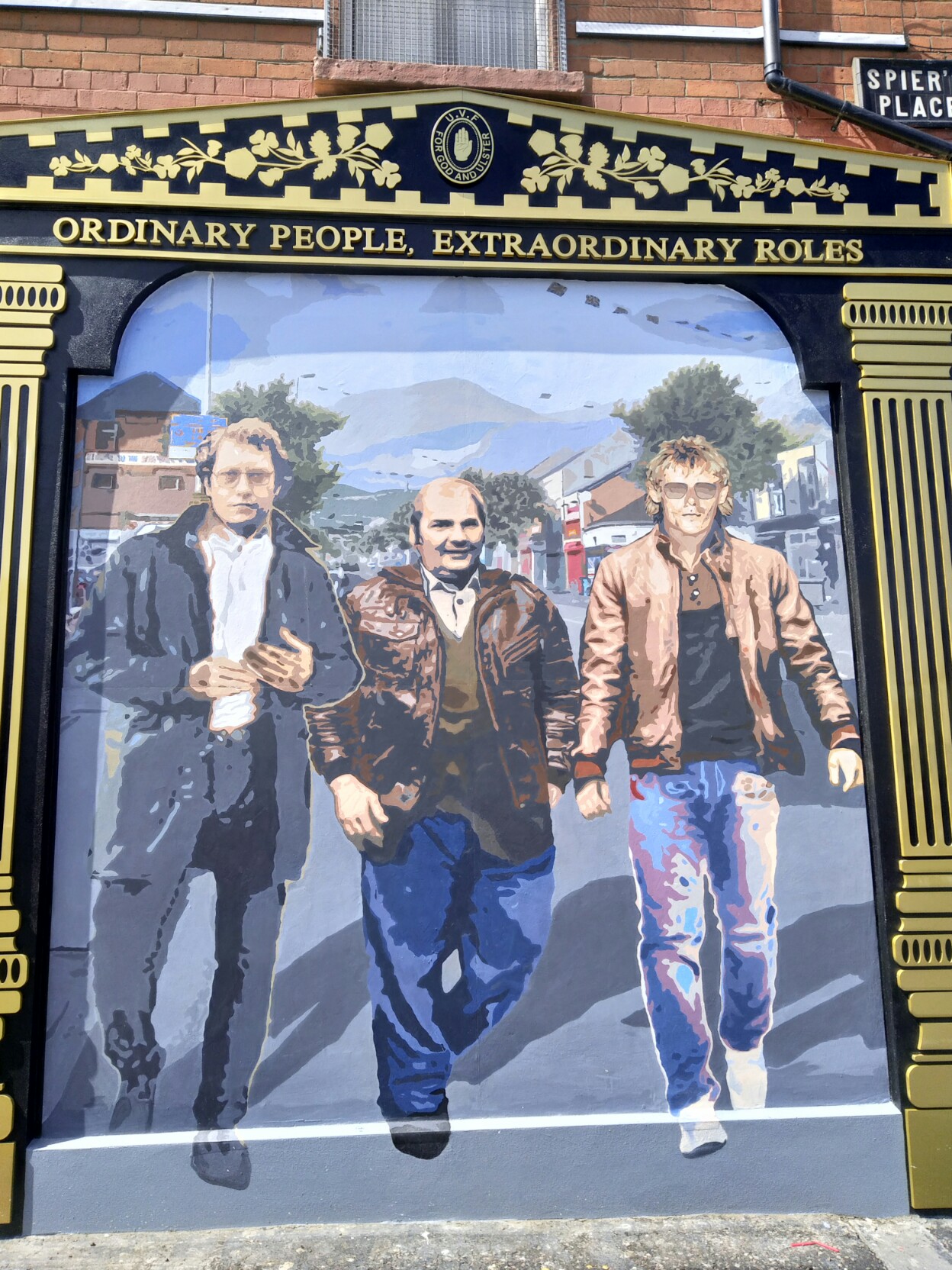 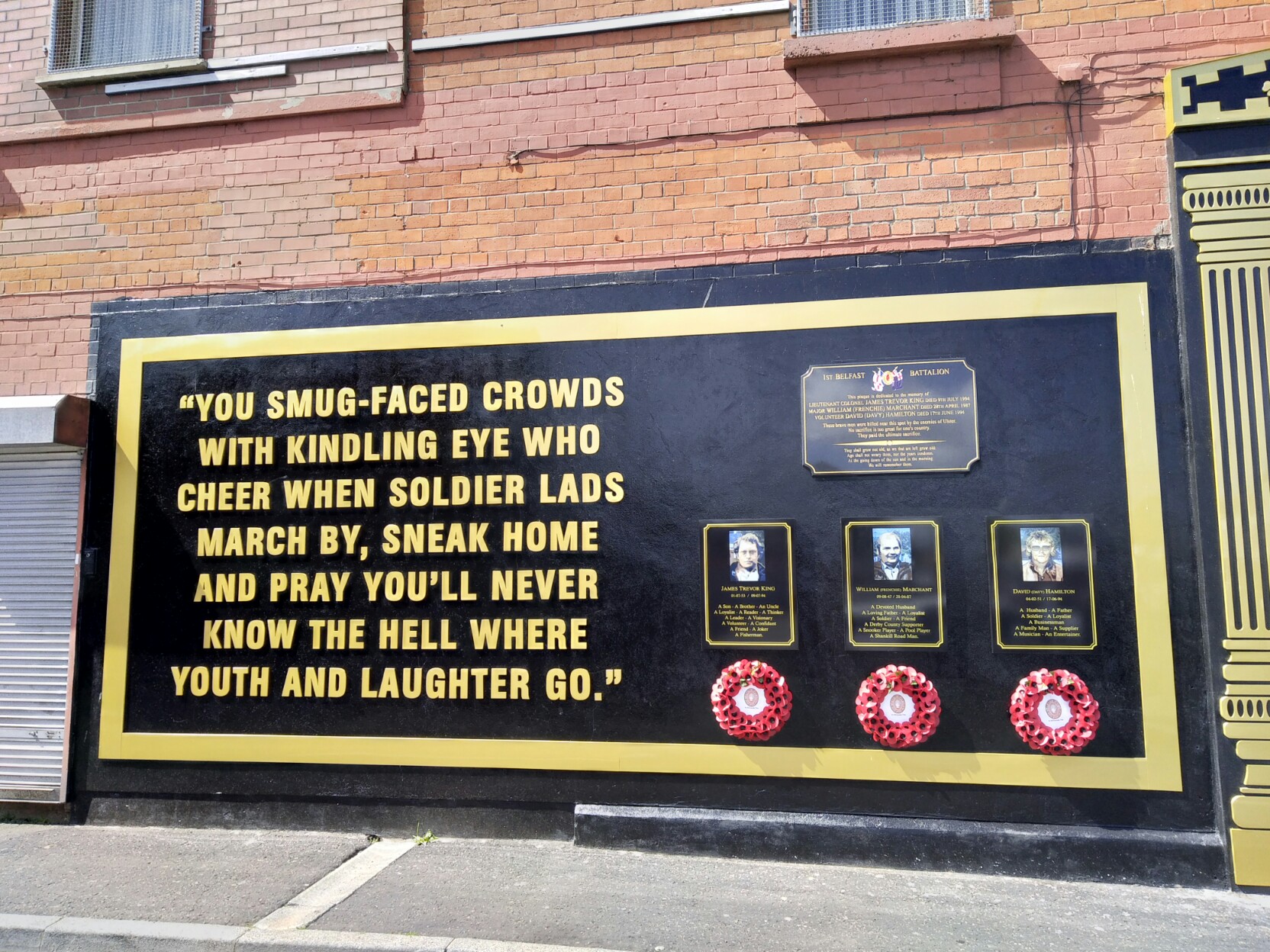 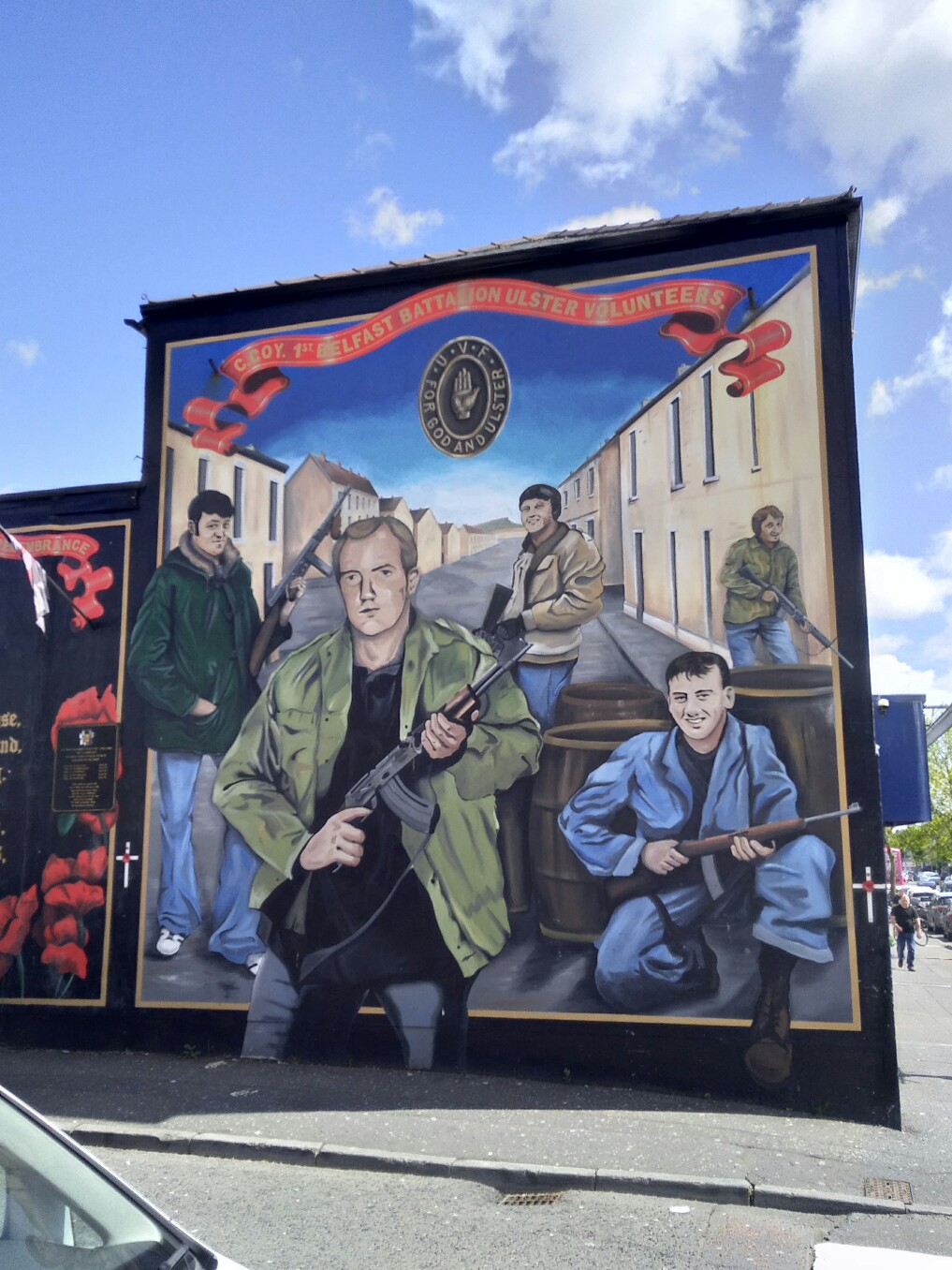 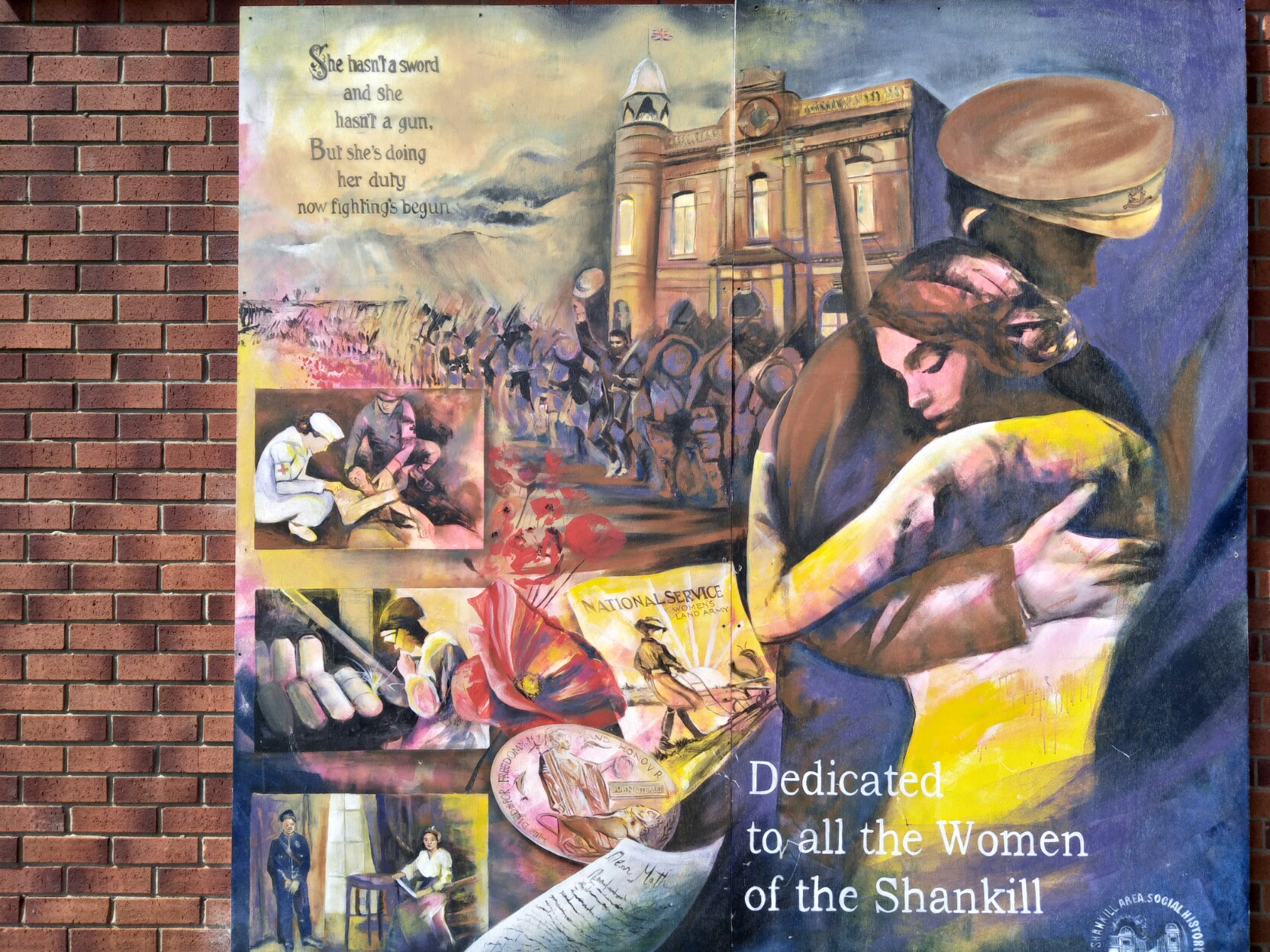 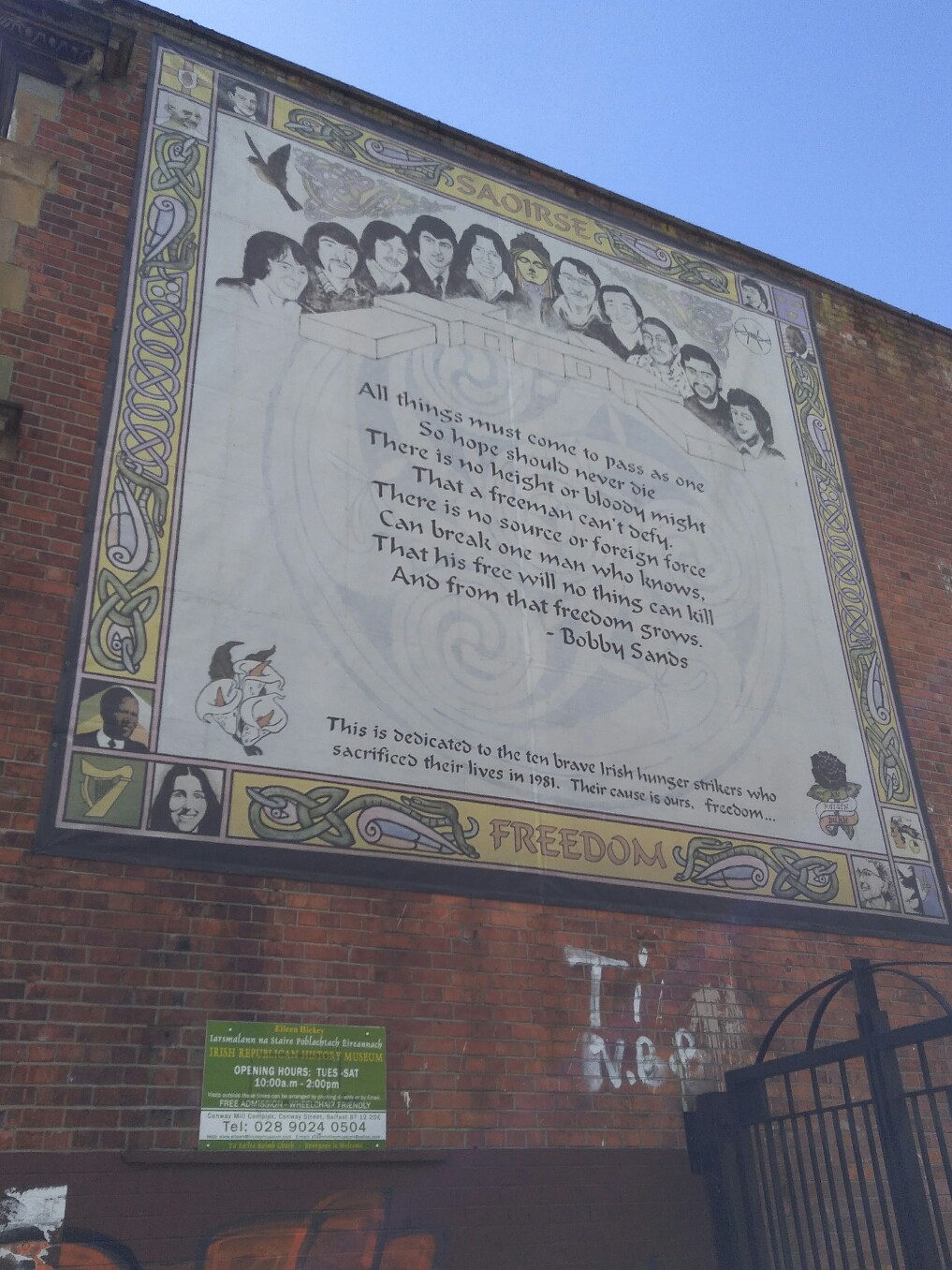 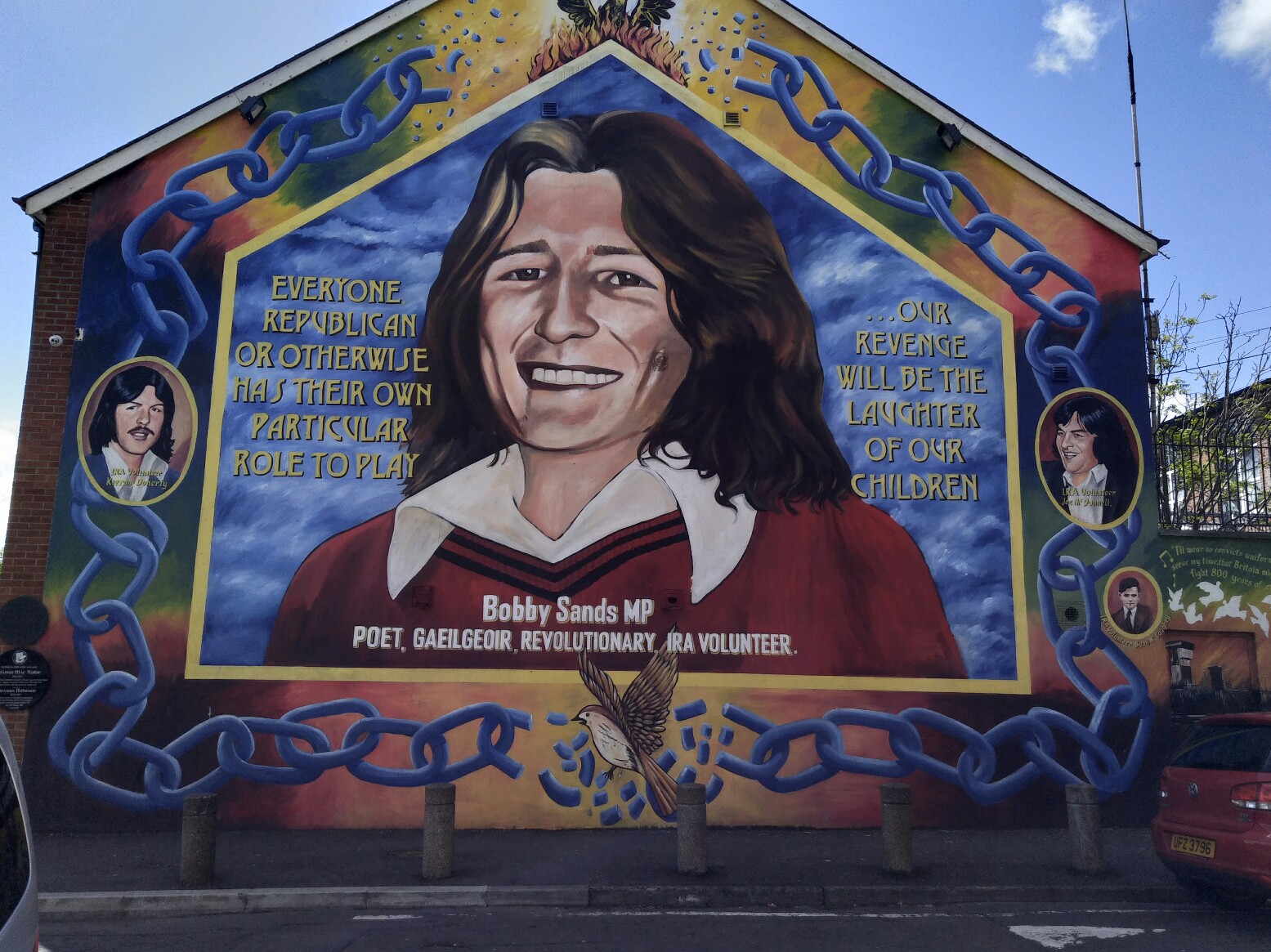 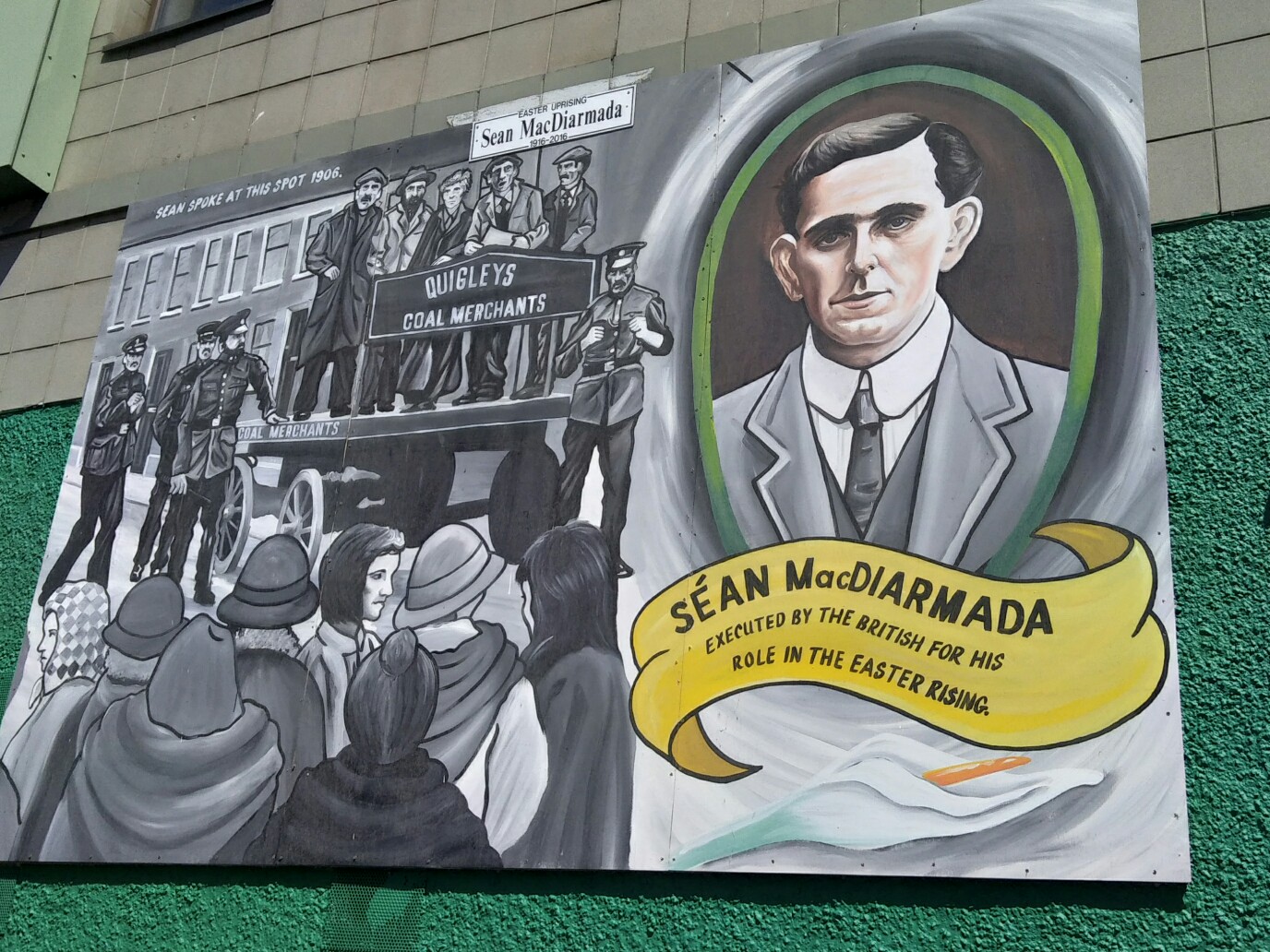 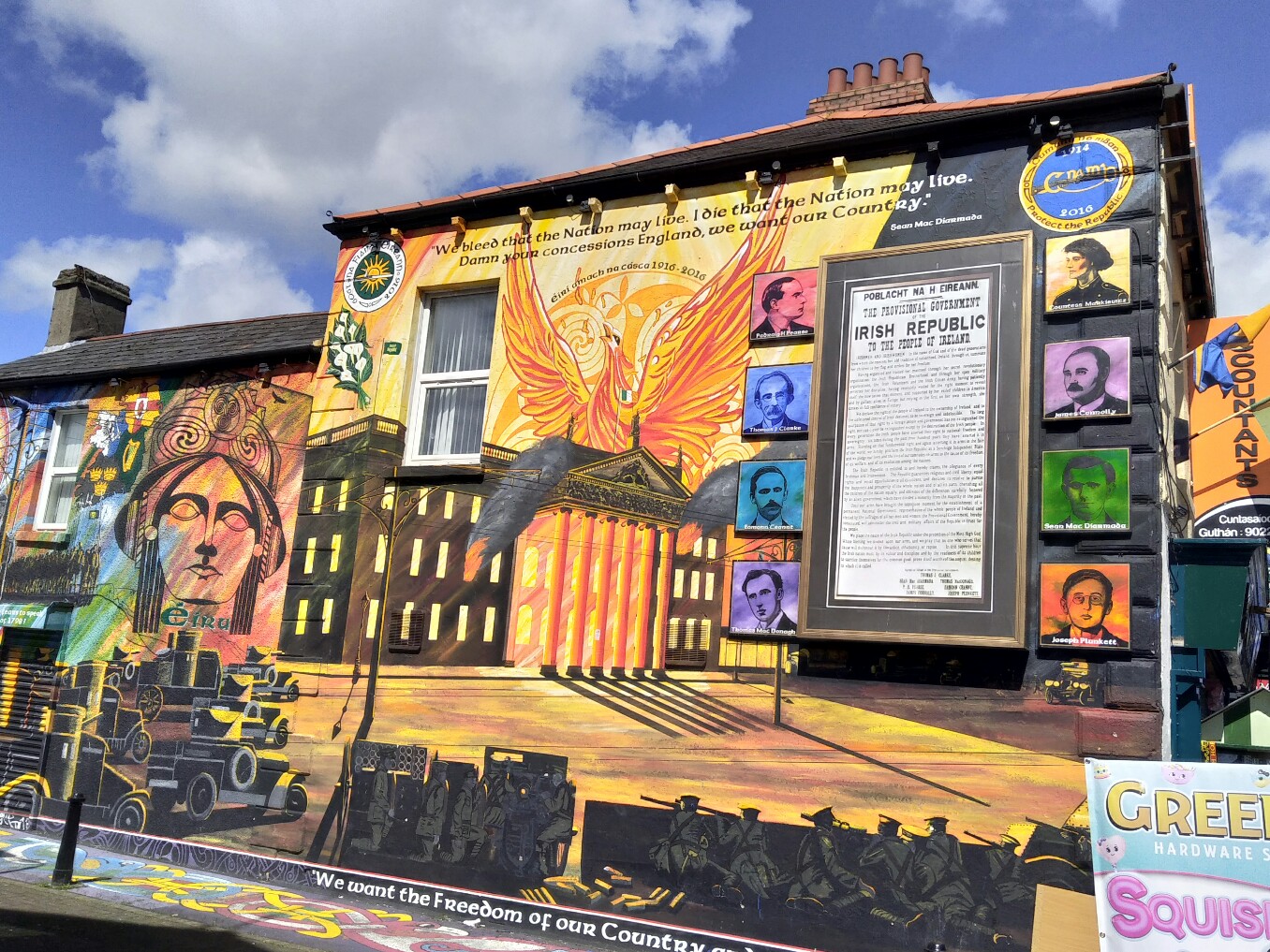 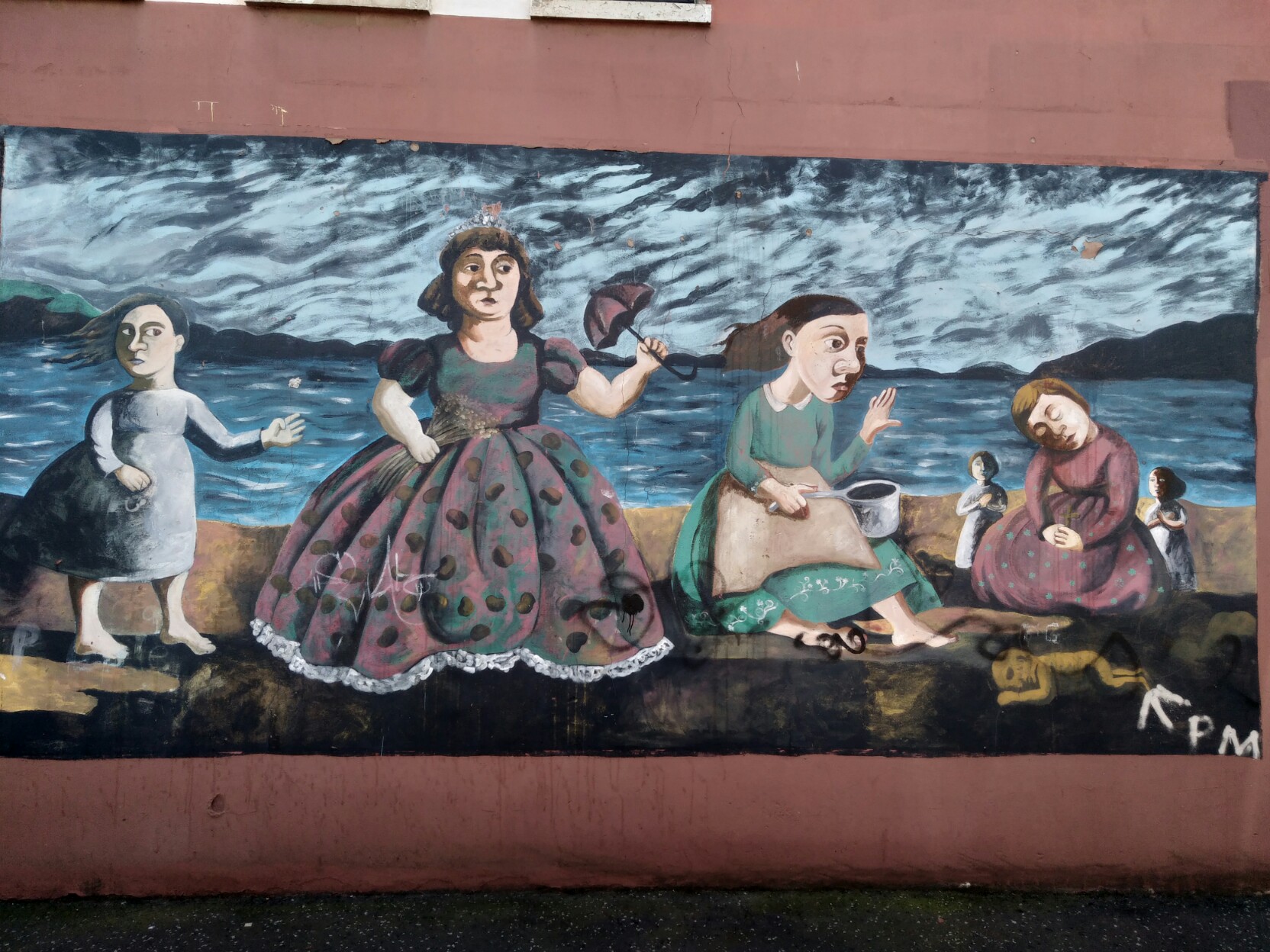 Ok so I'm not sure that last mural was political but it evened the numbers up. Actually it did appear that the loyalist Shankhill had far, far more memorabilia, much remembering the lads of Ulster who died on the Somme in 1916, in itself a political statement contrasting those deaths v the separate political strife that was going on over the border where the Easter uprising was also keeping the British forces busy.

To keep the peace, the peace lines, peace walls were erected to separate rival communities. The one along the Crumlin Road came down as recently as 2016 but many still remain and not

It's raining as we leave the campsite. The forecast is rain all day until evening. Whoopee! Still waterproofs have been donned and a brisk walk to the bus stop gets us there just