It's raining as we leave the campsite. The forecast is rain all day until evening. Whoopee! Still waterproofs have been donned and a brisk walk to the bus stop gets us there just as the bus hoves into view. 30 mins or so later we jump off in central Belfast, pull out our tourist maps and are instantly descended upon by the two rival hop-on, hop-on bus companies. One is the well-advertised international company that has flyers at the campsite whilst the other, touting the phase "official", pitches to us first. Both the same price £10 but the "offical" one does a longer tour (i.e. goes to the castle) and the ticket covers 3 days as opposed to the rival's 2. Gotta be the better option, right? Maybe. We go with it anyway.

The guide marches us across the city to the tour start point where we have 15 mins wait before the bus arrives. They didn't say we got a vintage bus tour! Looking like something Cliff might have used for "Summer Holiday" we discovered that aging open-top Routemasters don't remain waterproof for ever. Several downstairs seats are wet and even our seat suffers from the occasional drip onto our raincoats.

The guide is chirpy enough though pointing out the city's historic highlights and interspersing with appropriate musical clips - who remembers Ruby Murray? Who knew she was a Belfast lass?

Of course no tour of Belfast is complete without a trip past the peace wall and into the Catholic Falls Road and the Protestant Shankhill Road. The murals, still looking freshly painted suggest the peace is still a fraught matter. Whatever your thoughts, for the people's sake let us hope that the blunderings around the customs union for Brexit doesn't disturb the fragility of the Good Friday Agreement.

Prison time again. Our fourth prison in less than 2 years, this time the Crumlin Jail, a prison of Victorian origin that became home to many activists on both sides of the "troubles" debate. Similar panopticon design to other Victorian prisons, this one is built with 4 wings eminating from half of the "circle". 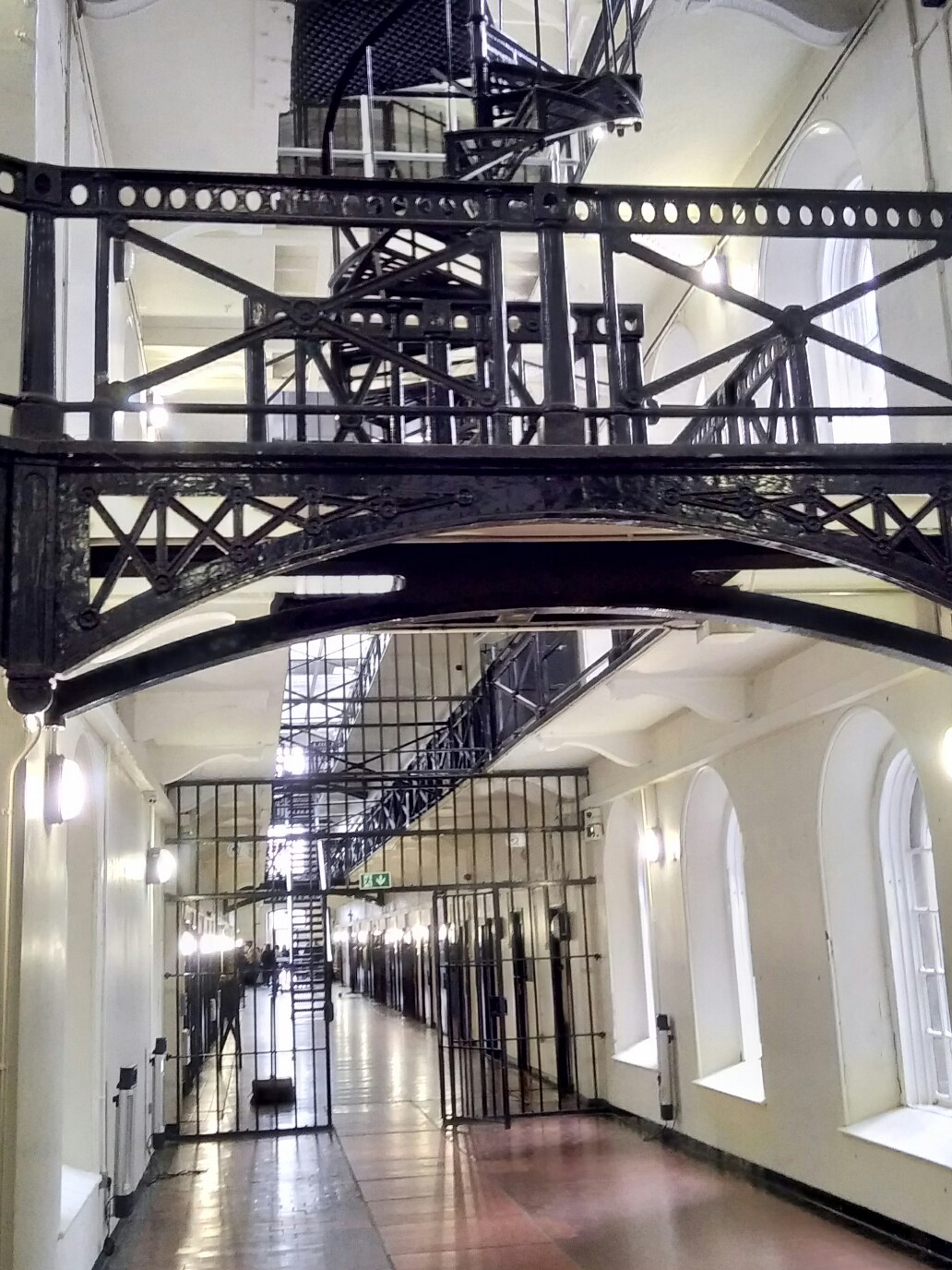 Back in the 80's and 90's Labour's decision to remove political status from the prisoners allied with a policy not to segregate loyalists and unionists meant the prison saw huge amounts of unrest. Rooftop protests, bombs and firebombs inside and outside the prison, shootings outside and one incident of a rocket-grenade being fired at the prison.

In the quieter times the cells may have looked like this 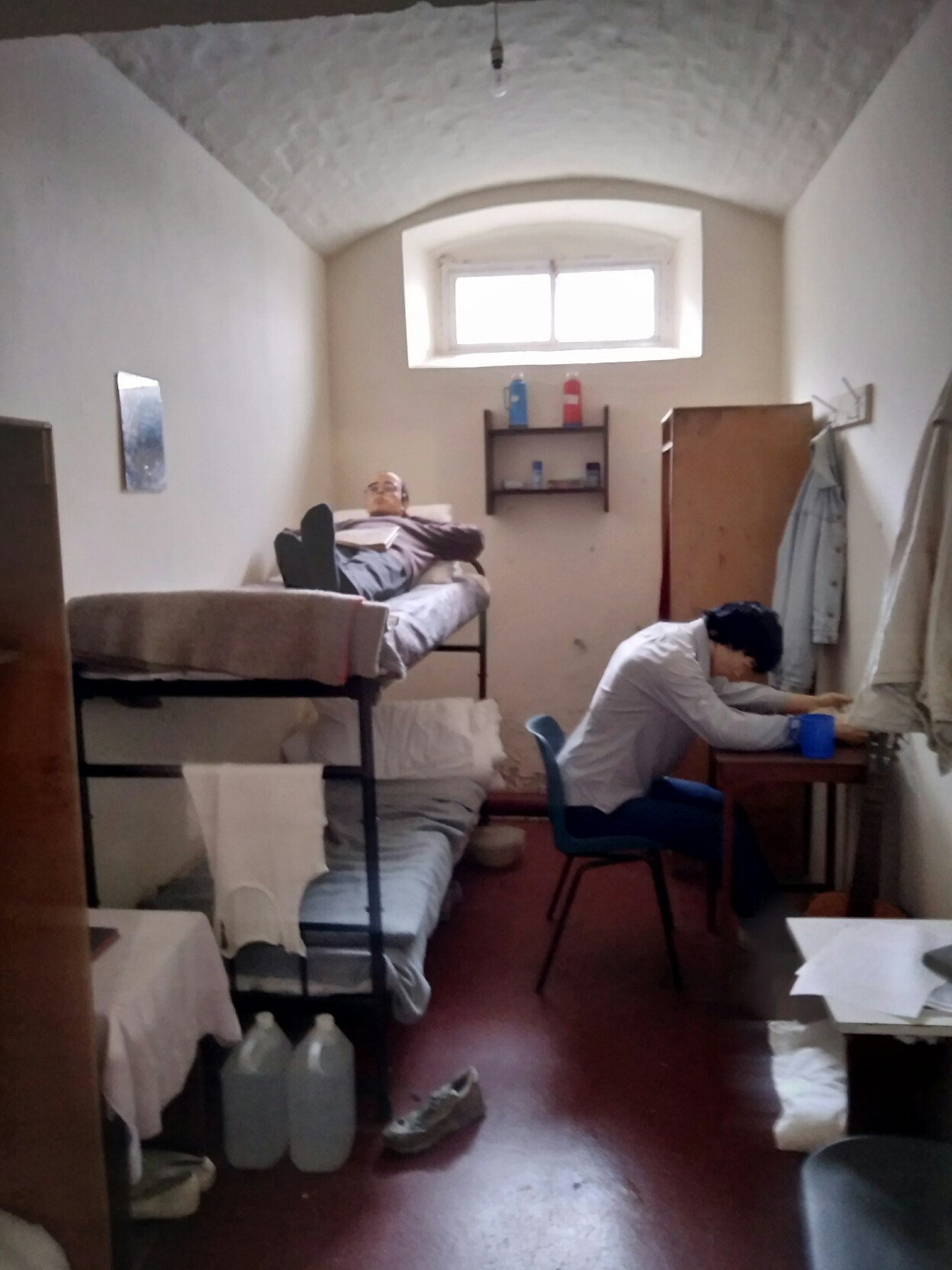 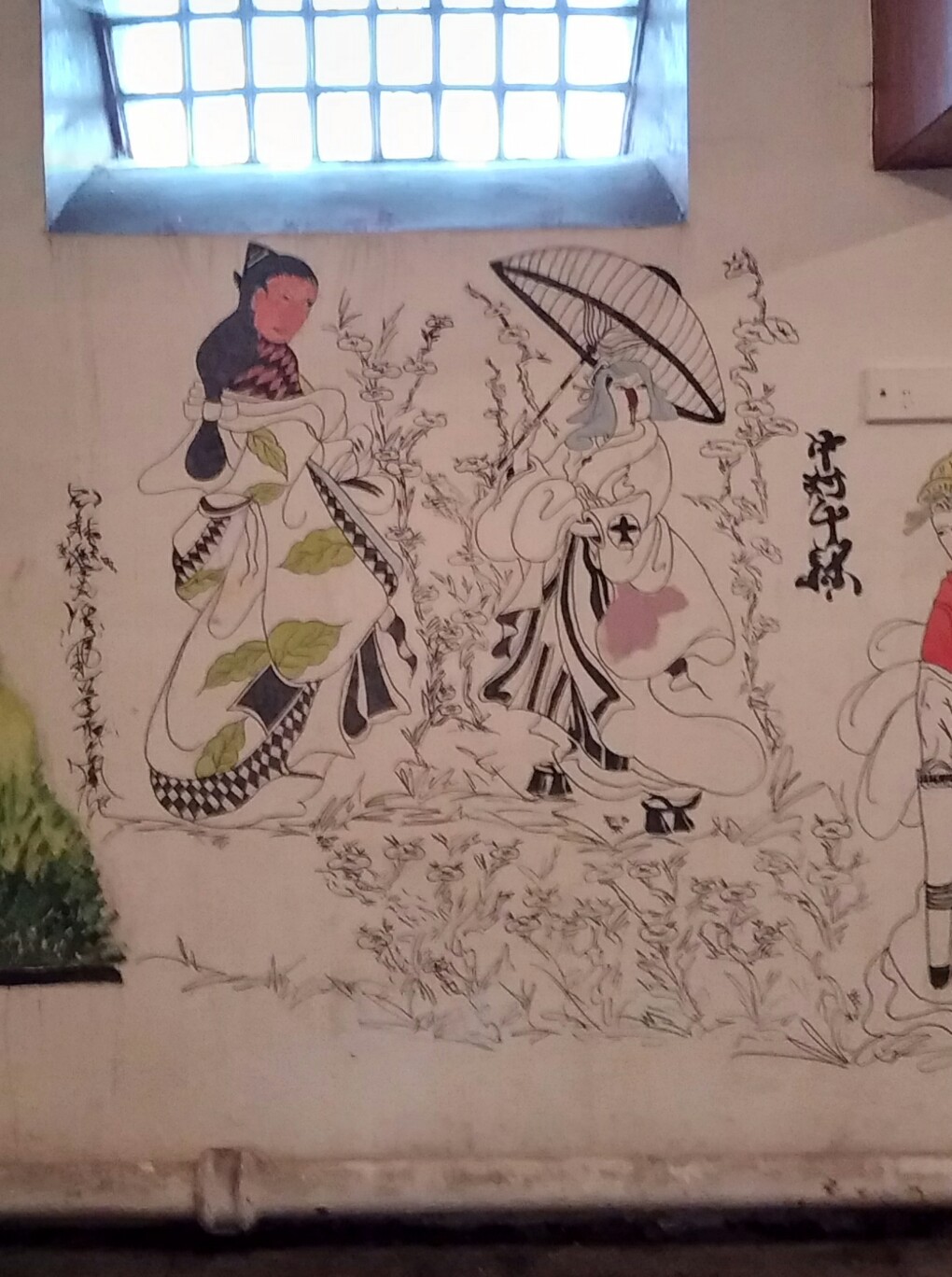 Of course, no prison visit is complete without it grizzlier side being revealed. One cell has the formidable frame to which prisoners were strapped and, stripped to the waist administered corporal punishment, either the cat for older prisoners or the birch for younger ones. An example cat and birch was on display too. Horrific but even more so was the condemned cell with it's hidden (via a sliding bookcase) door into the adjacent execution room complete with noose and trapdoor. The tour guide was very aware of visitors' sensitivities and several folk sat out the gruesome description of the actual executions.

Tour completed we wander back to hop-on the bus; two of the rival companies busses pass before ours turns up. The same leaky vehicle with the same guide we left 90 mins or so earlier.

Traffic is horrible, Ed Sheeran, Oasis and a major football match are all in town tonight. And the persistent rain doesn't help. In the lulls between attractions our guide does a great job in keeping us entertained "I'll tell my ma", "Black velvet band" and several others, both classic and modern. Discovering a German couple we even got a few bars of "99 balloons"! We stayed on past the castle, back to town, out past the Titanic museum and back into town, finally alighting at the famous Crown Bar.

Now anyone who knows me will know that I've visited the odd bar or 3 (thousand). So it is pretty rare my first reaction on entering a pub is "Wow"! The Crown is early Victorian, all stained glass, gorgeous titles and deep mahogany. A rare example of a pub with booths, about a dozen of them each seating about 8 folks and still with the aged bell-push. Spectacular isn't the word for it. Sadly the beautiful glass and consequent subtle light was well above the capability of this phone's camera. It came as no surprise to find out it's owned by the National Trust. Nor to hear that a pair of young loves called Harry and Megan took a booth here three or four weeks ago. Having resigned ourselves to standinga booth door opened and we were welcomed to join the occupants. 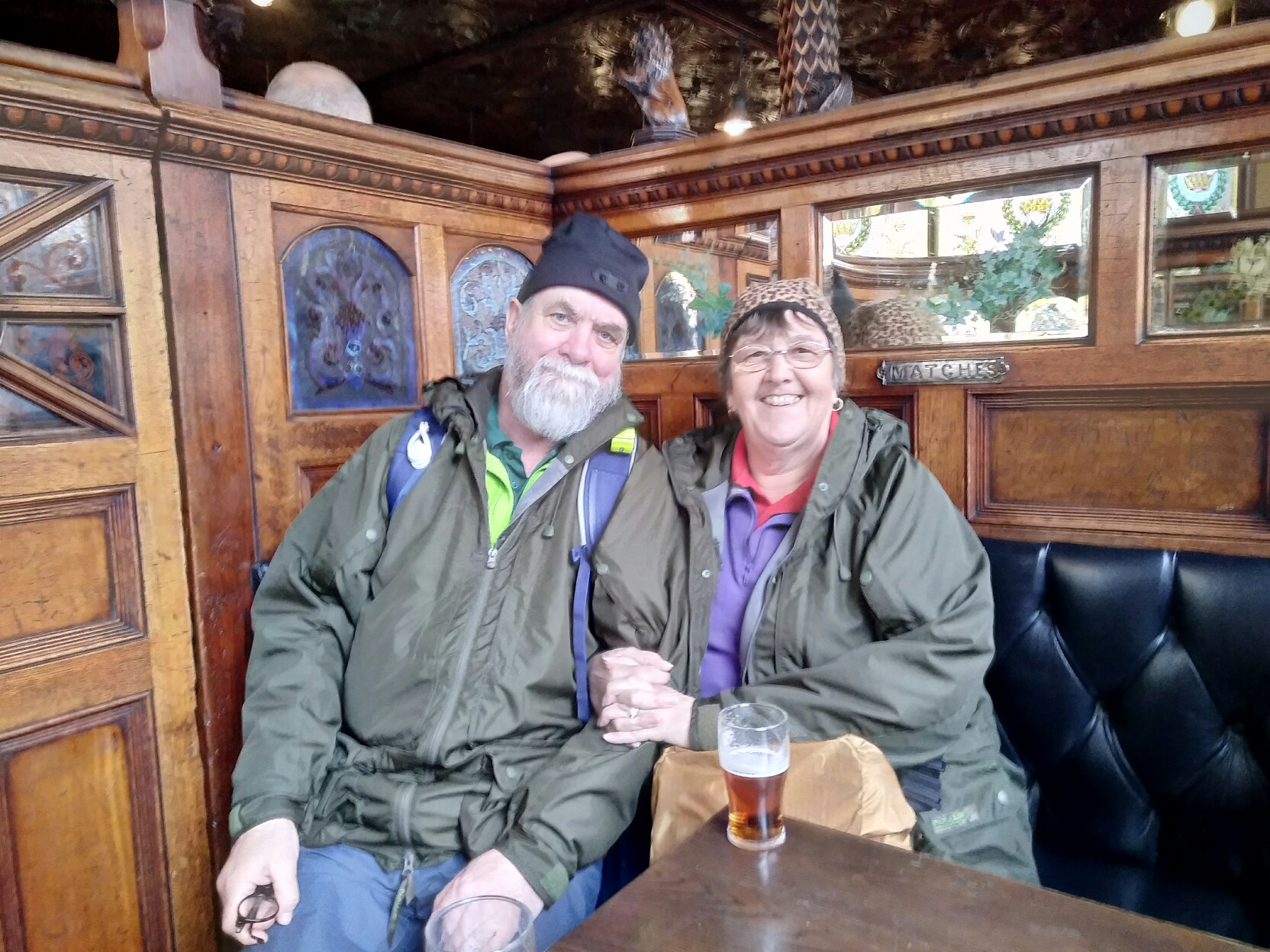 And a view from outside: 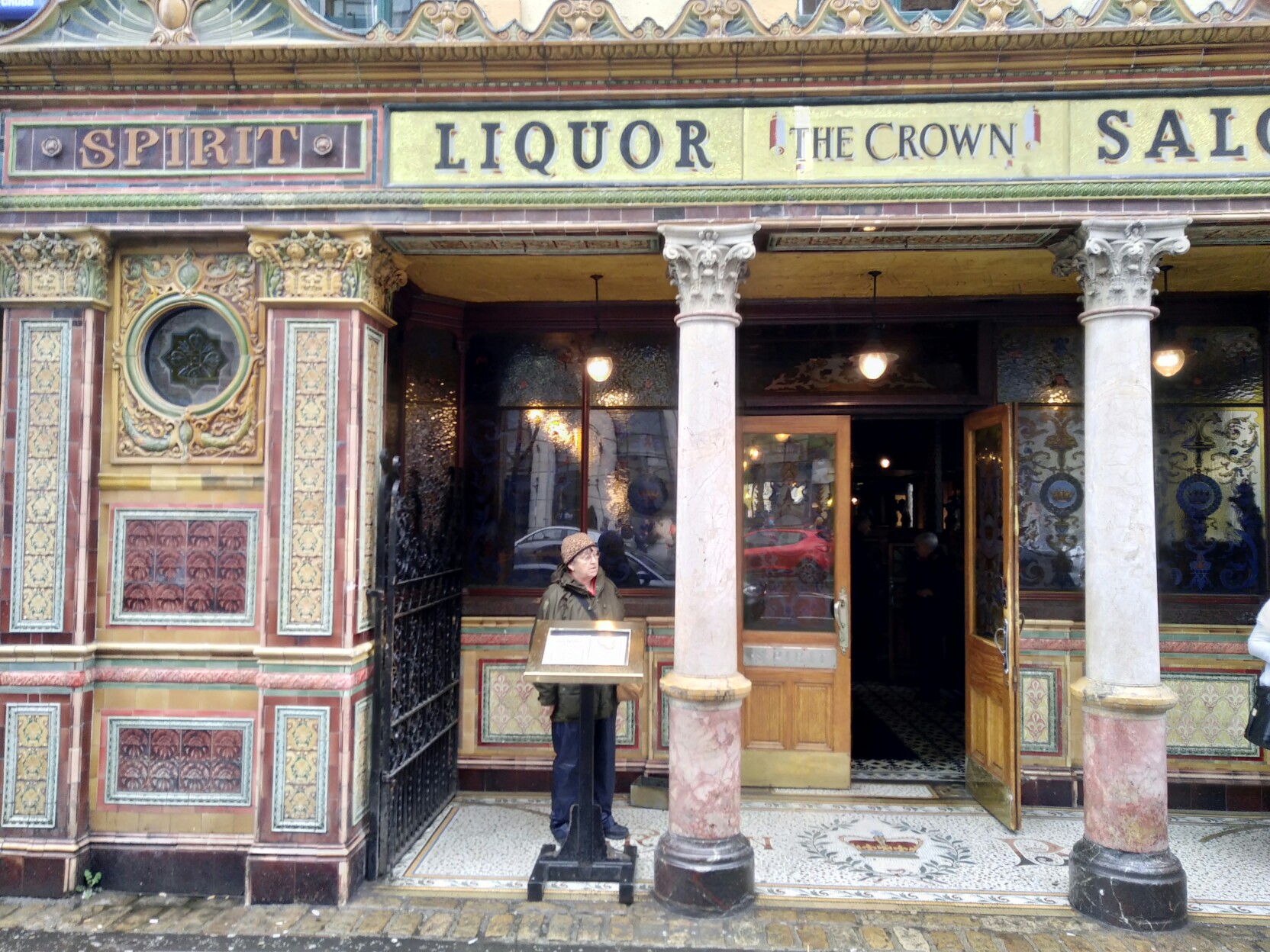 We all saw the violence that erupted on the Belfast streets in the 70s, 80s and in into the 90s. Some may even have been touched by it closer to home as IRA