Heading south now. Aim is to get to Oban in the next couple of days and head on over to Mull. The first part of today's journey travels the 23 mile length of Loch Ness, along its northern shore. Now here's an interesting fact (let's avoid the philosophical discussion as to whether anything gleaned from Wikipedia actually qualifies as 'fact') Loch Ness contains a more fresh water than all the lakes in England and Wales combined!

This is tourist country. Coaches and large motorhomes abound as we stop in Drumnadrochit, home of  "Nessieland" and the "Loch Ness Centre and Exhibition". No little green velvet monster souvenirs for us I'm afraid, just a newspaper and a couple of bread rolls for lunch. However we do take one tourist snap - a floral facsimile of the history to come. 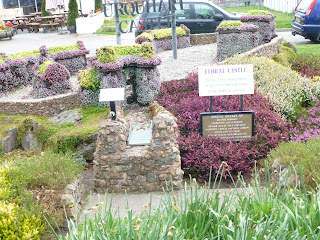 Those of you adept in decyphering my cryptic blog titles will realise this is, of course Urquhart Castle, site of many bloody battle, nestling on the side of the loch. The battles continue into the 21st century as coach loads of tourist jostle for space in the gift shop. We stopped long enough to take in the display and watch a very good video describing the bloody history of the castle but then decided it was just too cold to make a detailed, close-up examination of the pile of stones really worth while. Ah, the joys of having an English Heritage card, the £8.50 each entry fee would have been sufficient to make sure we wrested every penny of value out of the trip but with free entrance we don't feel hard done by in just taking in the rapid visitor experience tour. This was even more amusing when, on the way out, we were accosted by a lady conducting a visitor survey. Being some of the few English visitors (Germans were much in evidence today) our opinion was highly sought after. I think two of our answers were off the ends of her scale. First being, "so you are tourists, how many nights are you planning to be away?" - I doubt her options went anywhere near '81'. And as an opposite, "how long was your visit today?" I doubt many people weigh in at less than an hour and she was palpably surprised with "40 minutes"! One comment we did make was that the museum and shop were very small but we'd arrived at an off-peak time during low-season, it must be like a mediaeval seige in the high season. 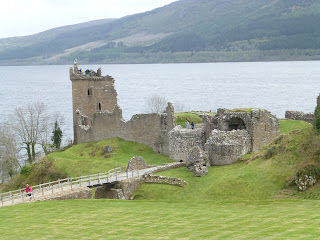 Next planned stop was Fort Augustus and the Caledonian Canal Centre and Museum but the day still hadn't warmed up, the tourist hordes were off-putting so we passed on by. We did stop at Fort William though. A wander round town; several outdoor clothing shops, a bit like Kendal but less well at heel and a couple of clothing stores had closed down. One ex-shop was now a food bank. Keep it up Davie boy and you, George, the British economic recovery is safe in your hands! A coffee and back to the car park. Sorry, motorhome park. It was very frustrating to drive into the city centre short-term car park to be confronted with a no motorhomes sign. Of course, what they really meant was no vehicles so large as to not fit into our car sized bays. Had they said that then we could have parked and smirked as larger vehicles reversed out but we daredn't take the risk so reversed ourselves and parked up at the special motorhome and caravan parking area. I took great delight in plonking our tiny van in a huge bay, thus denying parking for a vehicle that actually needed all the space. Still despite railing against having to park with the big boys, it all turned out to our advantage - the motorhome parking was next to the station and the Jacobite Express steamed into town just as we were leaving 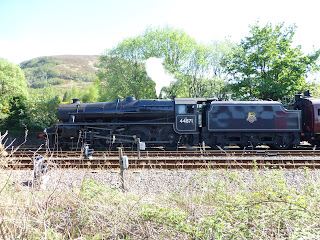 Our planned stop for the night is at Tyndrum which means continuing on from Fort William and through Glencoe, home of the infamous massacre. Time is pressing on and we don't risk stopping at the National Trust For Scotland museum despite our English National Trust cards giving us free admission. This is climbing country, we've just passed Ben Nevis south out of Fort William and now have huge steep sided mountains on all sides. Then at Glencoe village there's a loch with a harbour, nominating Glencoe for "prettiest little village in the UK" I'm sure. Quite unexpectedly after climbing a 1000' or so the mountains drop away and we're in high chapparal country. I'm not sure who I expect to see coming round the next corner, Manalito on his steed or Robert Pirsig on a BMW! Forests start to appear and it's the village of Tyndrum.

Once again Liz's web research pays off, a lovely little campsite, not the big one on the main road but a smaller one so tucked away that we missed the turning first pass. It has a hostel and a couple of glamping pods but most of the space is dotted with little backpacking tents for folk walking the West Highland way. This is a tough walk for tough people and if the chap I saw hobbling around earlier is anything to go by it doesn't always get finished. Incidentally the tiny village is on two separate rail lines - 5 miles away the West Highland Line from Glasgow splits into two separate branches - one to Fort William and the other to Oban. Tyndrum is the smallest village in the UK to have two stations, one on each line.

After dinner it is the obligatory walk to he ltocal pub. Chance conversation gets us talking with Nancy, a professor from a university just outside Nashville,Tn and a couple of students - 18 of them are over here, hiking and taking buses across to Fort William. Very pleasant company for the evening and my passing comment to young Tristram was to try some of the darker beers, a bit different to even the better US craft brews.

Firstly to confirm David's suspicion, glamping is, indeed, a portmanteau of 'glamourous camping'. The idea is to provide luxury pods (i.e. huts) in lieu of tent, with all the mod cons including

It's overcast, drizzly and not too warm. Still we do need to housekeep today. First thing on the agenda, after breakfast that is, is washing. It's piled up again so Liz sets off