Slightly warmer overnight, only down as low as 2 degrees and the wind was blowing onto the side of the van without a vent, so no draft. What a huge difference those 2 degrees make!Forecast for today is mixed but our handy Orkney walks book has a nice 6.5 mile walk from the campsite to the top of a local hill, with an optional extension to take in a Neolithic cairn. Who could resist!It was still bitingly cold in the wind so layers were called for: base layer, T-shirt, lightweight fleece jumper, heavyweight fleece gillet and raincoat accompanied by hat, gloves and neck buff. It's just 2 days from May, for goodness sake.Now this walk is not a round trip but an up and back, and the up bit is UP, it starts with a gentle uphill section and doesn't have a level or downhill section until the summit is reached, some 3 miles, 1000' climb later. A hard slog. Taking a wrong path and climbing 150' in just under half a mile, then having to backtrack, find the correct path and reclimb didn't do a lot for muscles or morale either! Still we flushed a Mountain Hare (and a second one on the way back down),  and that may just have been a short-eared owl. We also passed two sheep with lambs that could only have been born this morning, one still with placenta attached. We had to hurry past as we were a source of distress but used binoculars to watch from a safe distance as the lambs tried to struggle to their feet whilst mother was fussing over them and cleaning them. Fascinating!Onwards and upwards. Just shy of the summit the road forked, an easy metalled road to the top and a hillside footpath round to the cairn. Believing the cairn to be just around the corner, we opted for the footpath which was very obviously the road less traveled.Today's blog title? There has been some mention of "comfort zone" a few days ago. Well, today's walk took Liz so far out of her comfort zone that even if Torquemada himself has been putting the question to her it would have been barely less discomforting. Already fairly weary after a long slog we soon discovered the path, whilst clearly visible had deteriorated into an unstable peaty scrabble from tussock to tussock. Liz hates uneven downhill stretches and has a permanent fear of tumble or twisted ankle. The path continued to deteriorate and no sign of cairn as we slowed to a place Liz judged to be safe (which to be honest was only marginally slower than the pace I would have been comfortable with). After getting on for a mile we spotted a market post but no that wasn't the cairn, however it was just visible just another treacherous 200m ahead To be fair, what a reward. A 5000 year old Neolithic cairn with a ladder to lower yourself inside and a torch provided. Just us two solitary figures on a lonely landscape and a 5000 year old cairn. Real Howard Carter stuff 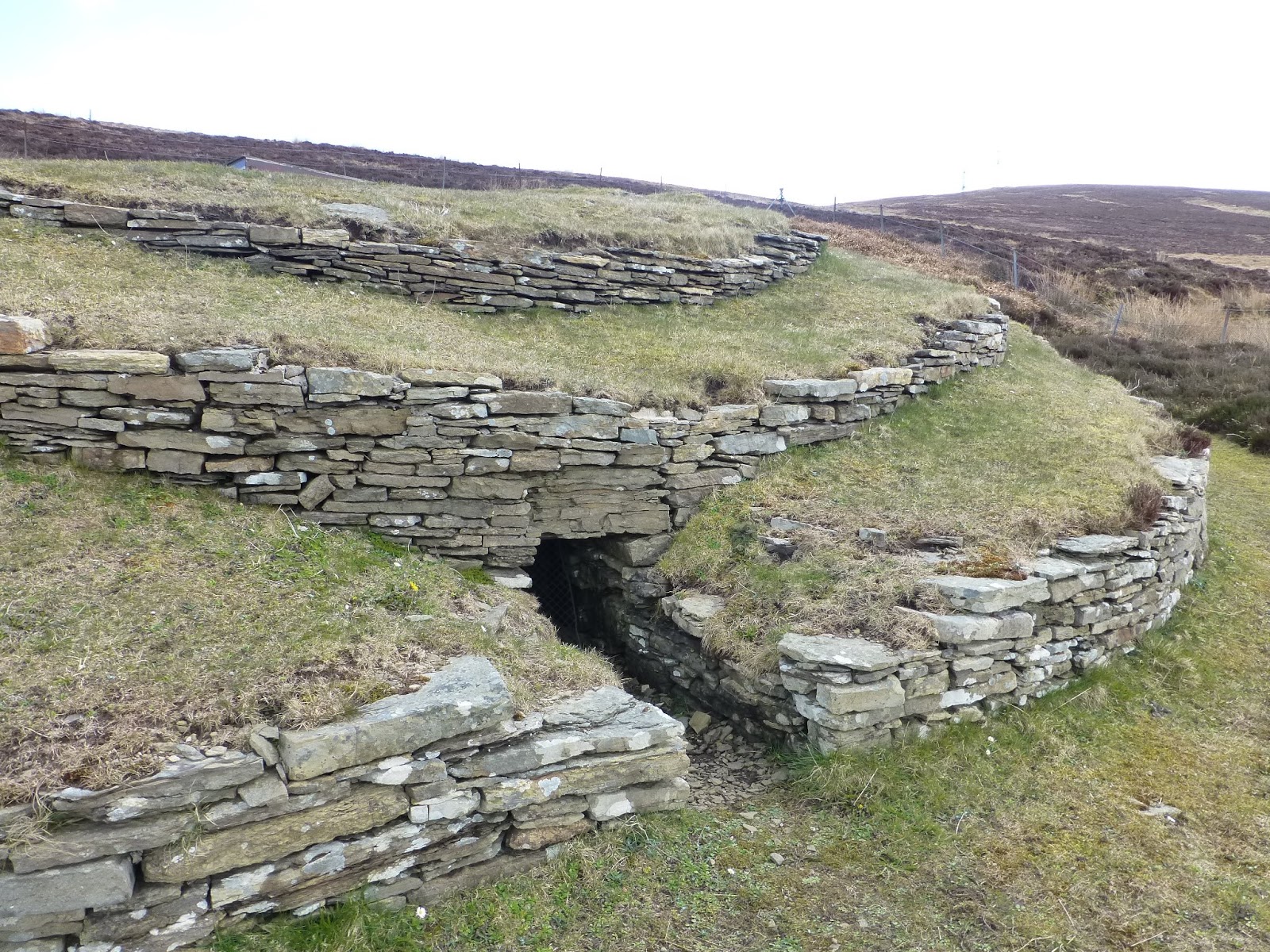 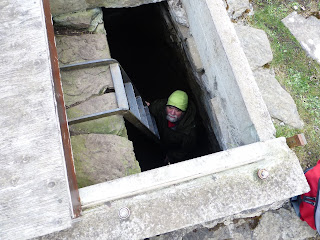 Backtracking uphill was much easier and safer than the descent and we made the marker post in minutes. Here the path forked with an alternate route down. It looked worse than the path we'd just been on but Liz assured me it was her preferred choice. Good choice! After just 50m or so it improved and after about half a mile it turned into a nice, even track leading gently off the hill, down to a main road and 2m walk back into Kirkwall.Walking along a busy road is weird here, drivers don't just pull out to avoid you, they will slow right down if there is any oncoming traffic and then pull right over to the other carriageway as they pass you. One car pulled so far over I thought he might lose his wheels in the verge opposite. If the walkers, like us, have stopped and got as close to the verge as possible, or stepped into it when sensible then these extravagant manoeuvres are generally accompanied by a cheery "Thank You" wave also.That's about it for today. It was a strenuous walk, just under 9 miles but with 1053' feet of climb and some pretty uneasy terrain. A doddle for proper walkers but a stretch for us, particularly Liz who ticked off the 25000 step mark on her wrist pedometer (OK, so we had to walk 100m out of the campsite and back tonight, just to complete the job).

Busy, not us but Kirkwall. Take a small town with narrow streets serving a population of 9000 and then add 4500 tourist incomers from two cruise ships and suddenly the sleepy streets are