... and from Lourdes to Kiltimagh
I've never seen a miracle like the airport up in Knock

Let's begin are the beginning. We're a bit slow this morning; having a wee dram back in the van after being in the pub seemed like a good idea at the time.

It's raining steadily. Not heavy, just steady and wetting. So we don't really get chance to explore Carrick-on-Shannon which is a shame, with all those boats in the marina it might be an interesting town. Instead we explore Tesco's and a few stores in the vicinity. Even venturing into Sports Direct! And buying something there!! Don't worry we don't have new four-figure designer trainers or anything, just a couple of new dry-sacs for our bedding, the old ones are getting past their best.

Back across town to another shopping precinct, this one having what the other lacked, a coffee shop. Decent WiFi allowed me to rewrite last night's blog which had some upload error (poor phone signal and no WiFi at The Thatch). It takes me a good 40 mins even with the photos sorted - I must have spent an hour last night. That's why it was 2am before we went to bed!

A campsite will be good tonight. We can shower and avoid a pub, giving our livers a well-earned recovery. There's a site down at Knock.

In 1879 a group of villagers had a vision. Why don't I let the plaque tell the story? 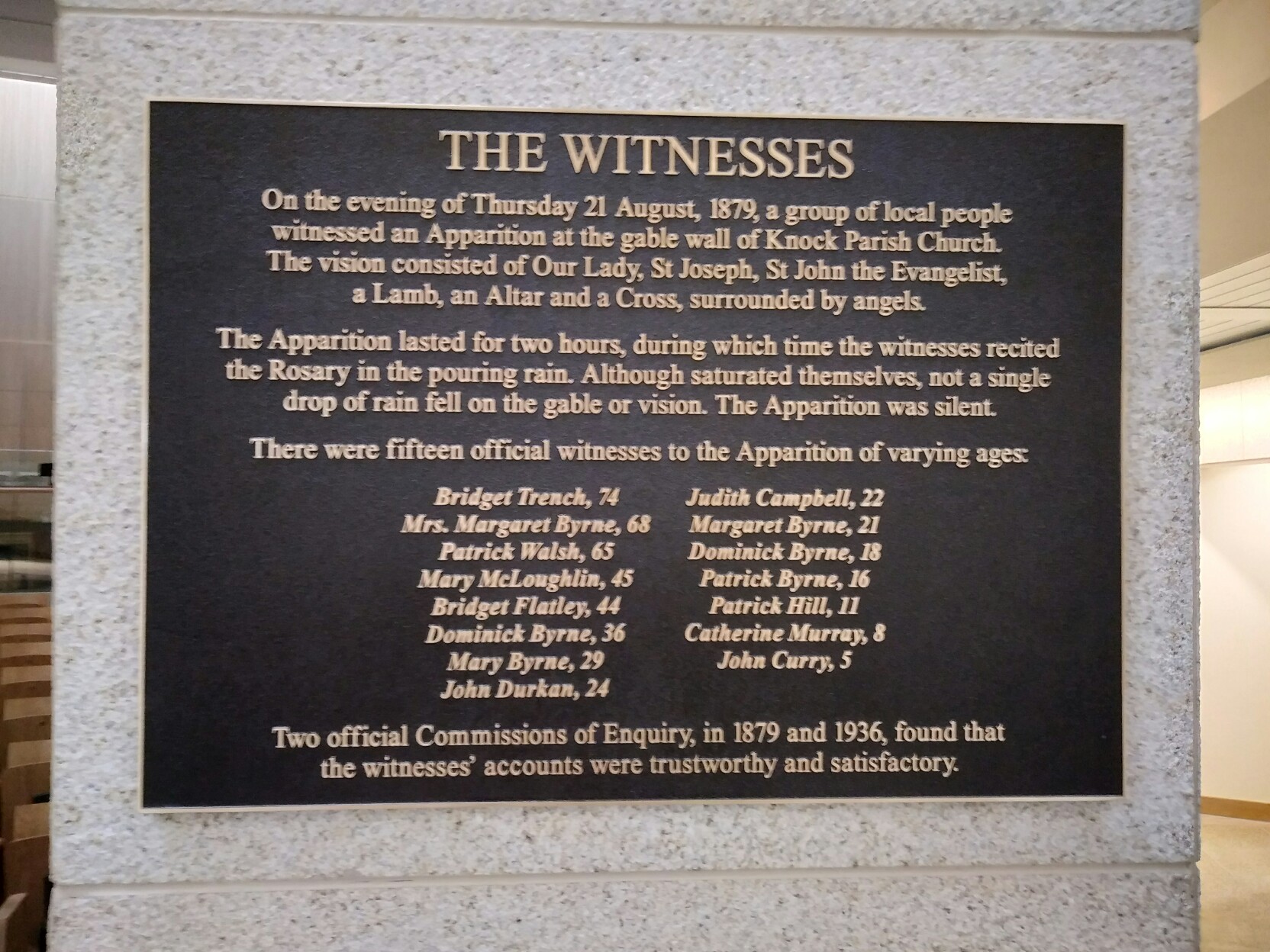 Now visiting here may come a a surprise. People know that not only am I an atheist but, in particular, no lover of organised religions, particularly the more extreme ones like Westboro Baptist Chapel or even God's Mafia which acts out of the Vatican and still refuses to face up to the shame of its many paedophilic clergy. That said, the current capofagmilia is one of my heroes in the way he is trying to drag his church kicking and screaming out of the 12th century and get it to embrace 21st century moral and ethical values. Mind you, here in Knock plenty of lampposts are festooned with posters designed to sway the vote in this week's referendum on the repeal of the 8th amendment and so pave way to allowing abortion within Ireland; I've yet to see one here recommending a "Yes" vote!

But, just like Newgrange, Knock is part of the Irish cultural experience. Particularly since the expansion of the site and attempt to turn it into a healing shrine, second only to Lourdes.

I may not be a fan of religion but I do appreciate the solitude and reflective atmosphere of churches and cathedrals. Liverpool's Catholic cathedral (Paddy's wigwam) was a wonderful place of solace when I was a student. A place to sit and reflect whilst basking in the wonderful light of its stained glass. No, not a religious conversion, I was just practicing mindfulness before John Kabat Zinn named and popularised it. Perhaps I was influenced by another Liverpudlian, Paul McCartney
When I find myself in times of trouble
Mother Mary comes to me
Speaking words of wisdom
Let it be

The Basilica at Knock left me cold though. No coloured light, just an oddly smelling concert hall with rows of numbered seats facing the altar stage. A church shouldn't leave you empty but this was almost as spiritually bereft as the hyperbolic excesses of the Dom in Cologne, the only other major church that has left me feeling bleak. Strange. 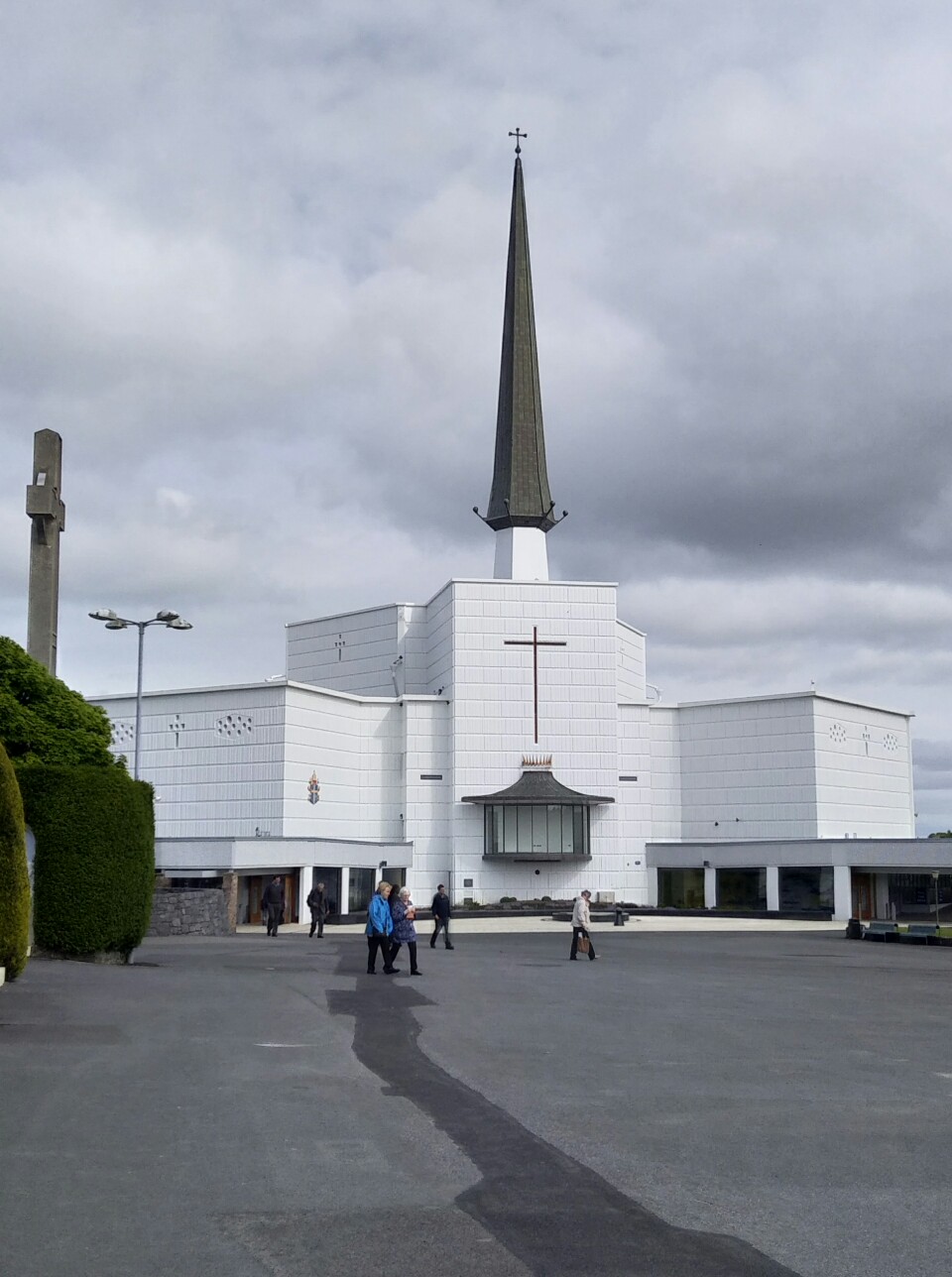 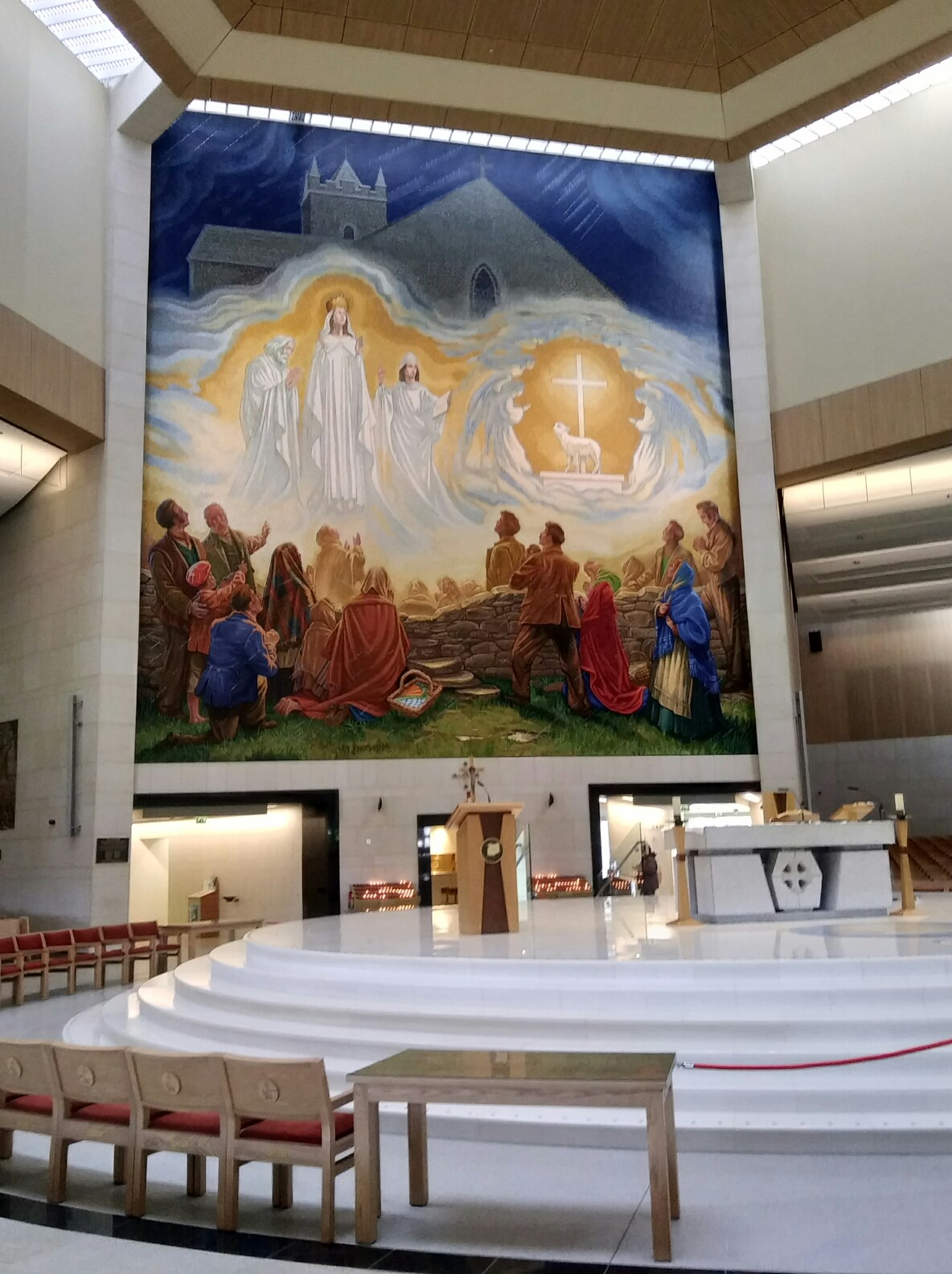 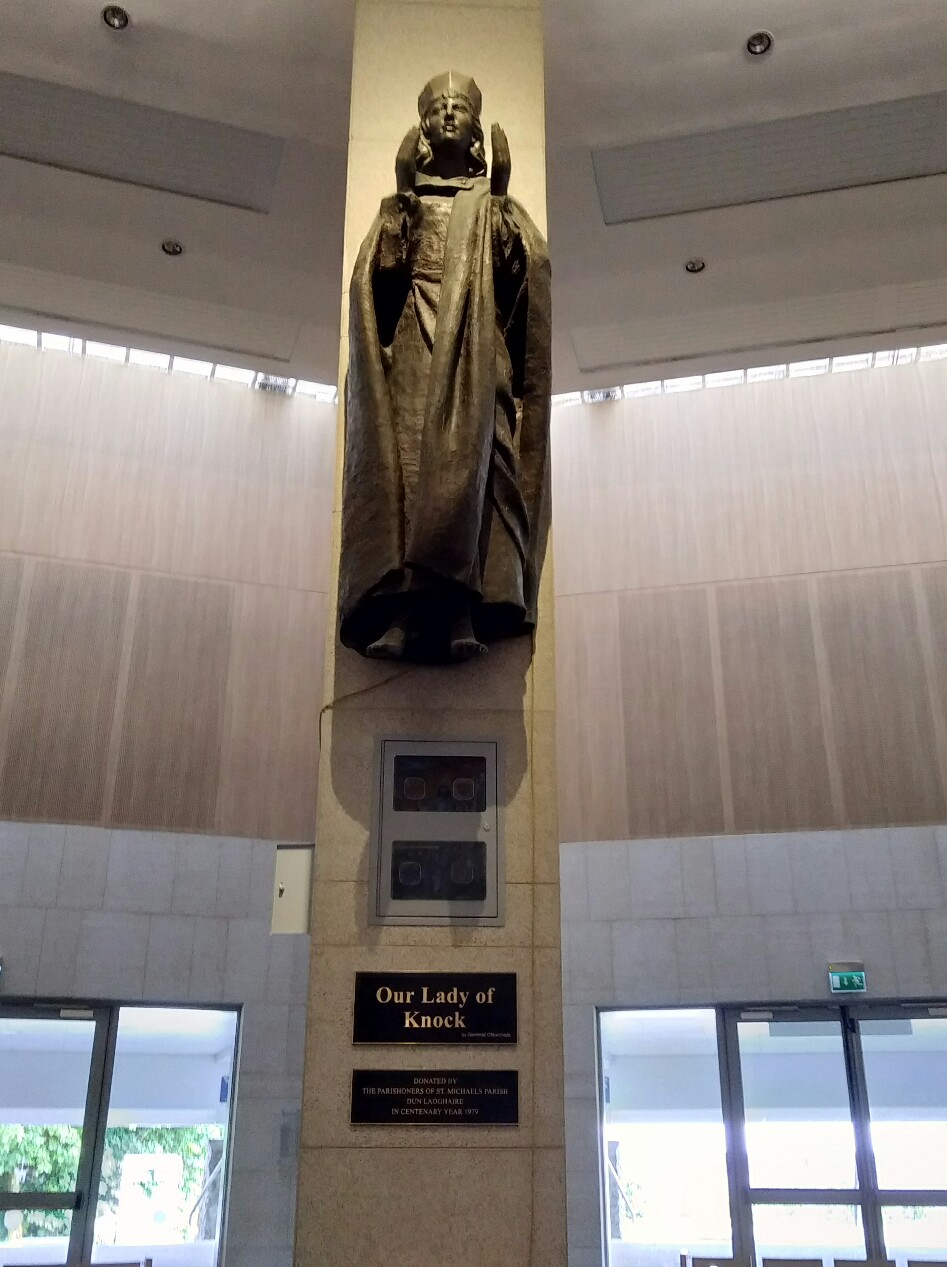 The shrine itself is in a separate building with a wall with bas-relief depicting the vision. Rather than disturb worshippers here's an external shot 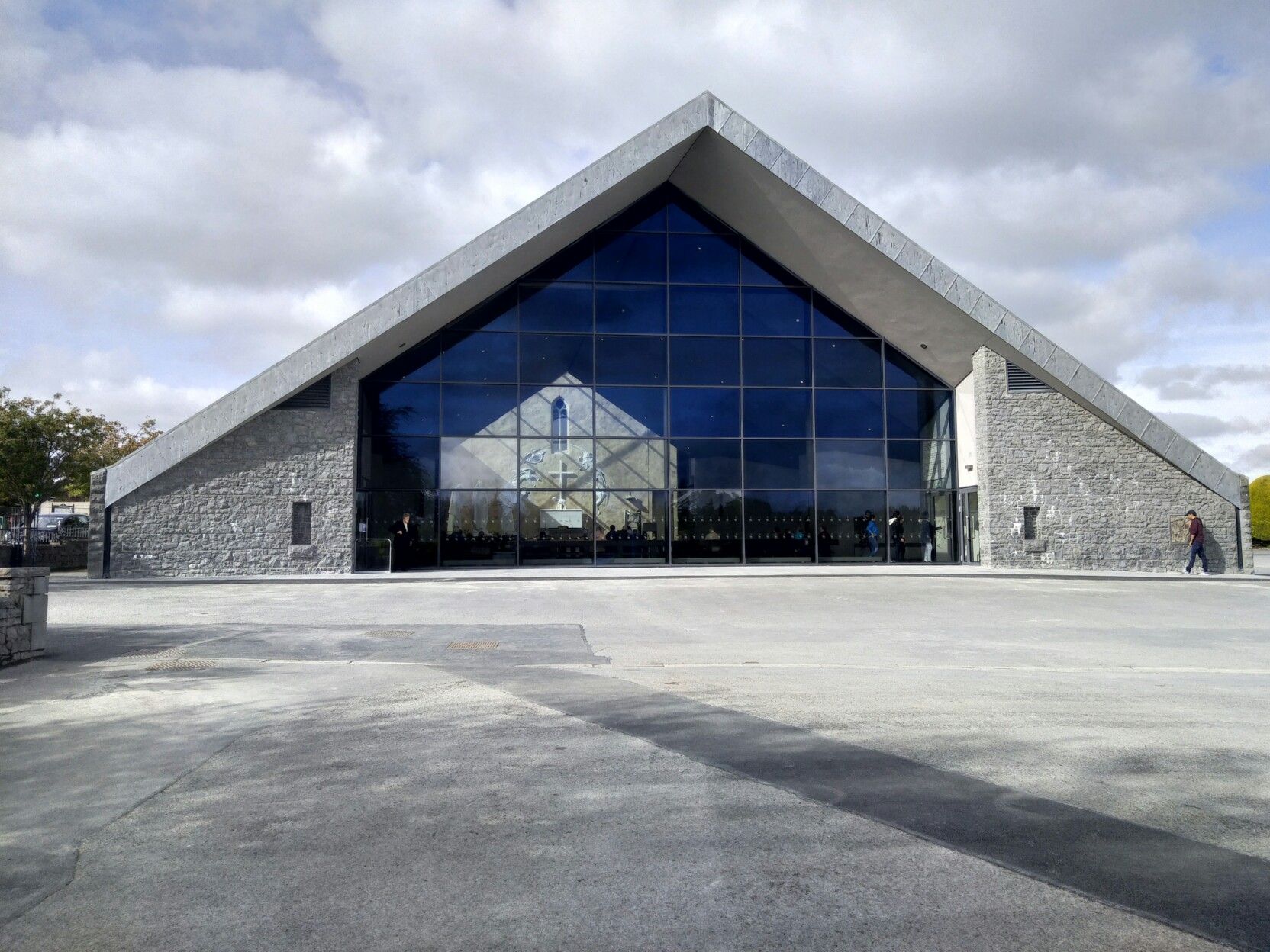 Of course no trip to a holy shrine could be complete without your own bottle of miraculous holy water. There was a while bank of dispensing points 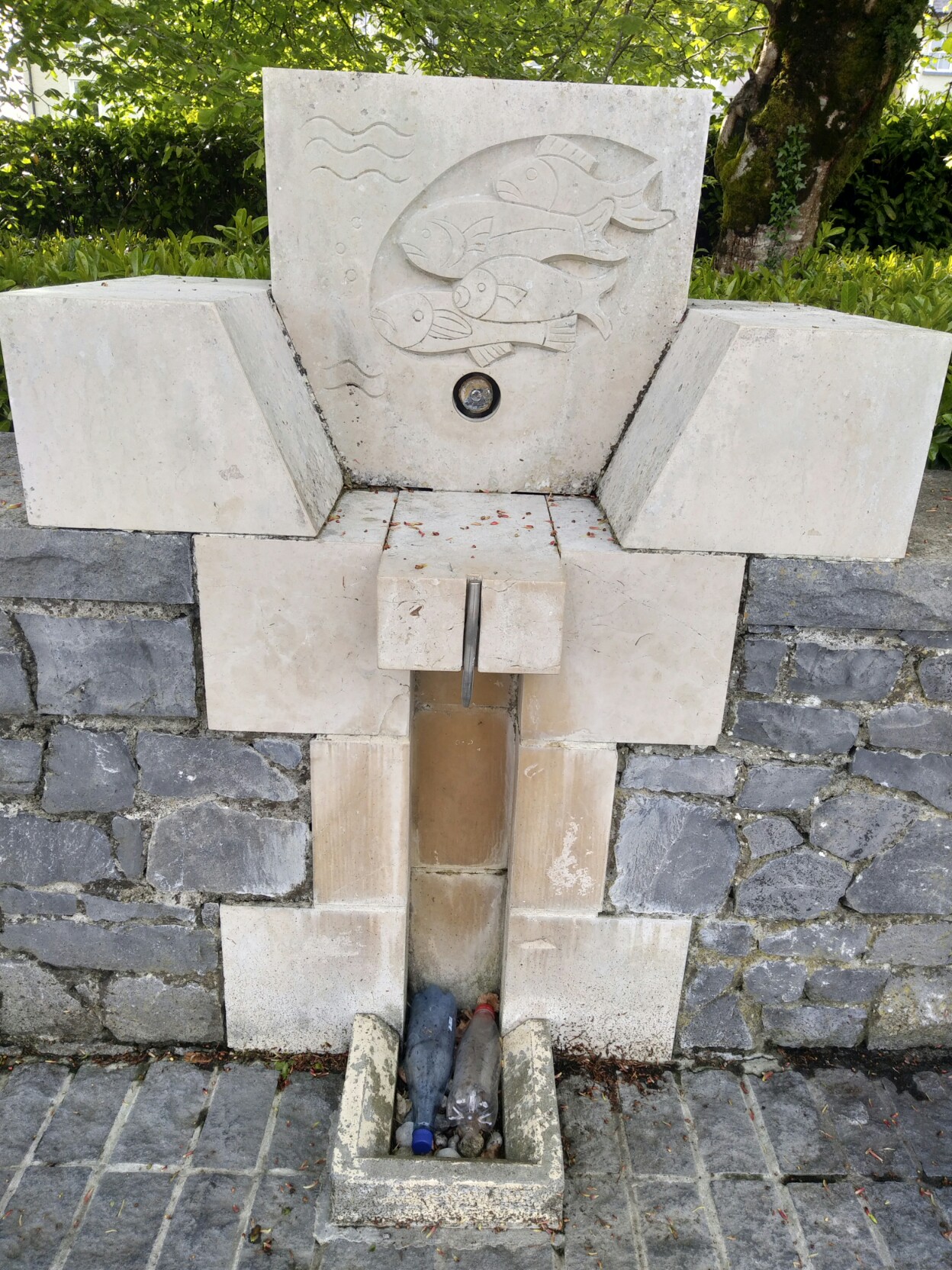 No bottle, no problem. There's a whole horde of shops out on the street that will sell you plastic containers, some appropriate for Somerset's finest cider whilst others were in the shape of a crucifix or Our Lady. The shops were tatty in the main, selling tat in the main. Hideous Chinese plastic religious icons, CDs of plastic paddy music, and assorted wool wear. It looks like Knock may need a third miracle as the second may have run its course a few years ago.

Today's route only comes out at 47 miles but it should be 52. For the first time this trip, we forgot to switch the tracker on when we left the pub this morning. Still it was only straight up the road to Carrick-on-Shannon before we remembered 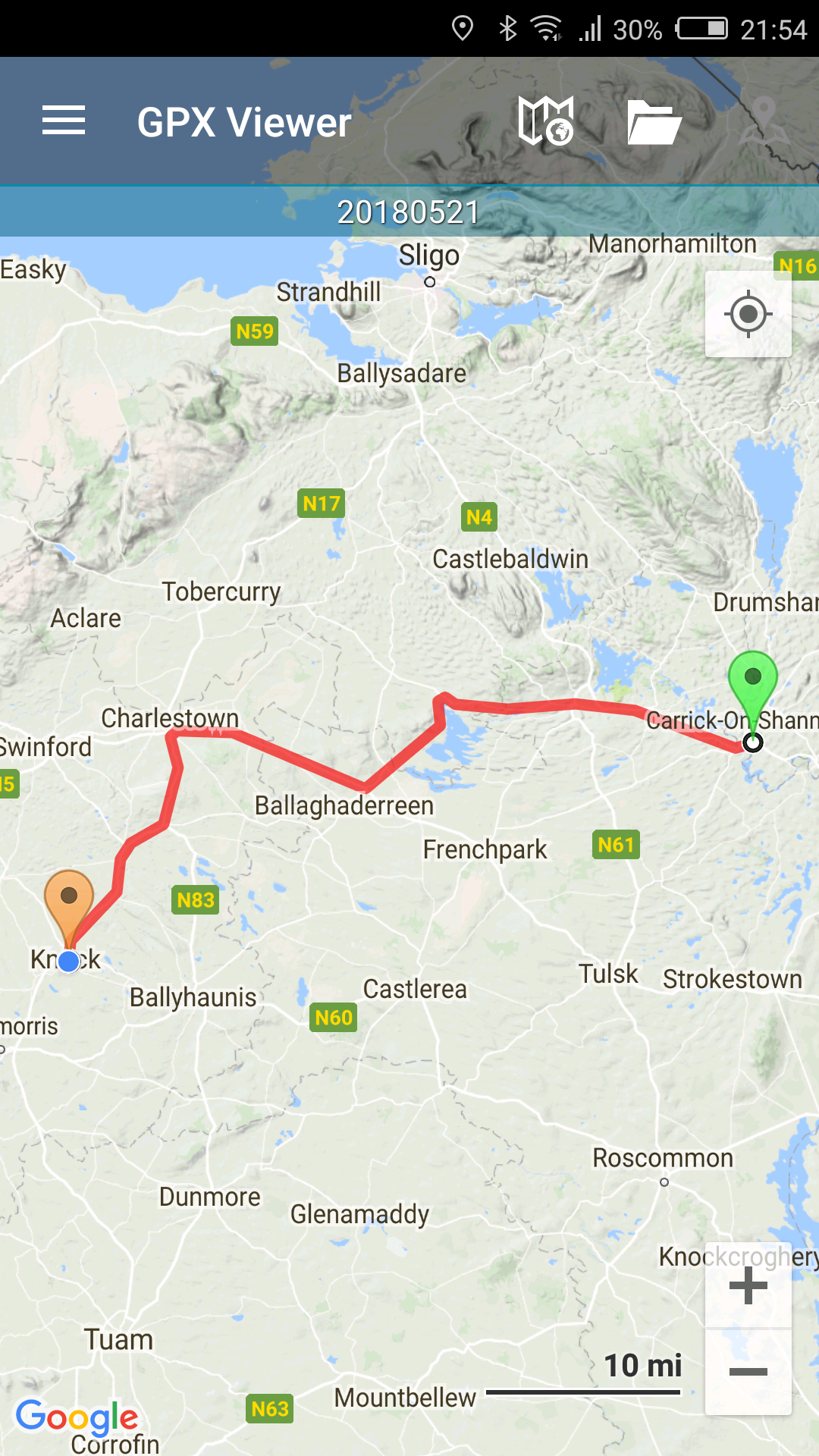 It's a little busier in Knock as we leave this morning. Still, I feel more depressed than spiritually uplifted. Reminds me of Mablethorpe, vibrant in its heyday perhaps, but now just out of

So, about 10 days ago, probably in Belfast, Liz has this idea "why don't we make sure we visit every Irish county, both north and south of the border". Brilliant idea