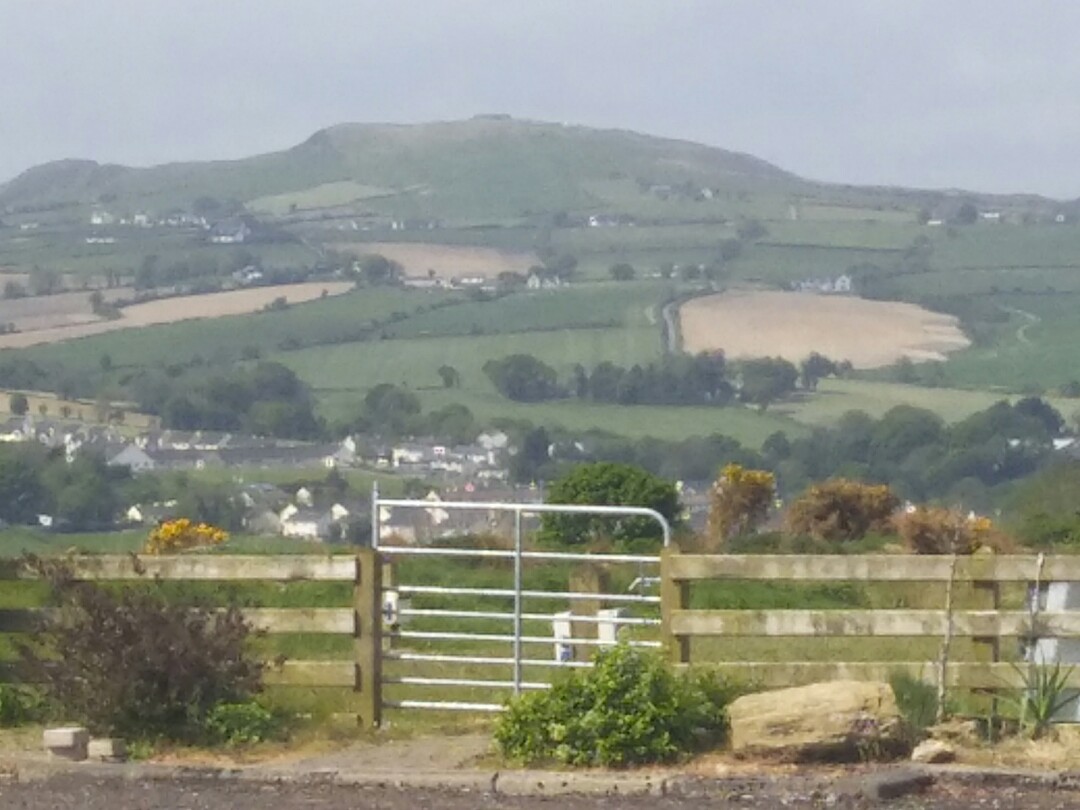 Donegal's Northern Atlantic coast today, starting off by going right up to the top, the most northerly point in the country, Malin Head. Before we can leave, a Dutch campervanner taps on the door and utters the famous words "I zink dis ees a nice van. Pleez you show" (unfair, his English was impeccable). We eventually drive out of the campsite and 30 metres later we are in the Republic (or the Free State as one NI person referred to it the other day)

Oh, last night as the taxi dropped us off at the site we were passed by two unmarked cars, each containing 4 police officers pulling out of the campsite. The owners explained that they'd popped round to look at and advise on proposals for new video security on the site. They also said that not too many years ago they'd have never got police up here on the site, not this close to the border.

The irony of leaving Northern Island and heading further north into Donegal wasn't lost on us as we set off for Malin Head. Passing a radio station and the Met Office post we reached the head itself. No lighthouse, just a long abandoned observation station. Parking was difficult because, like everywhere this week, the motorcyclists were out in droves. The haze meant the site visit wasn't at its photogenic best but here's proof that we were there 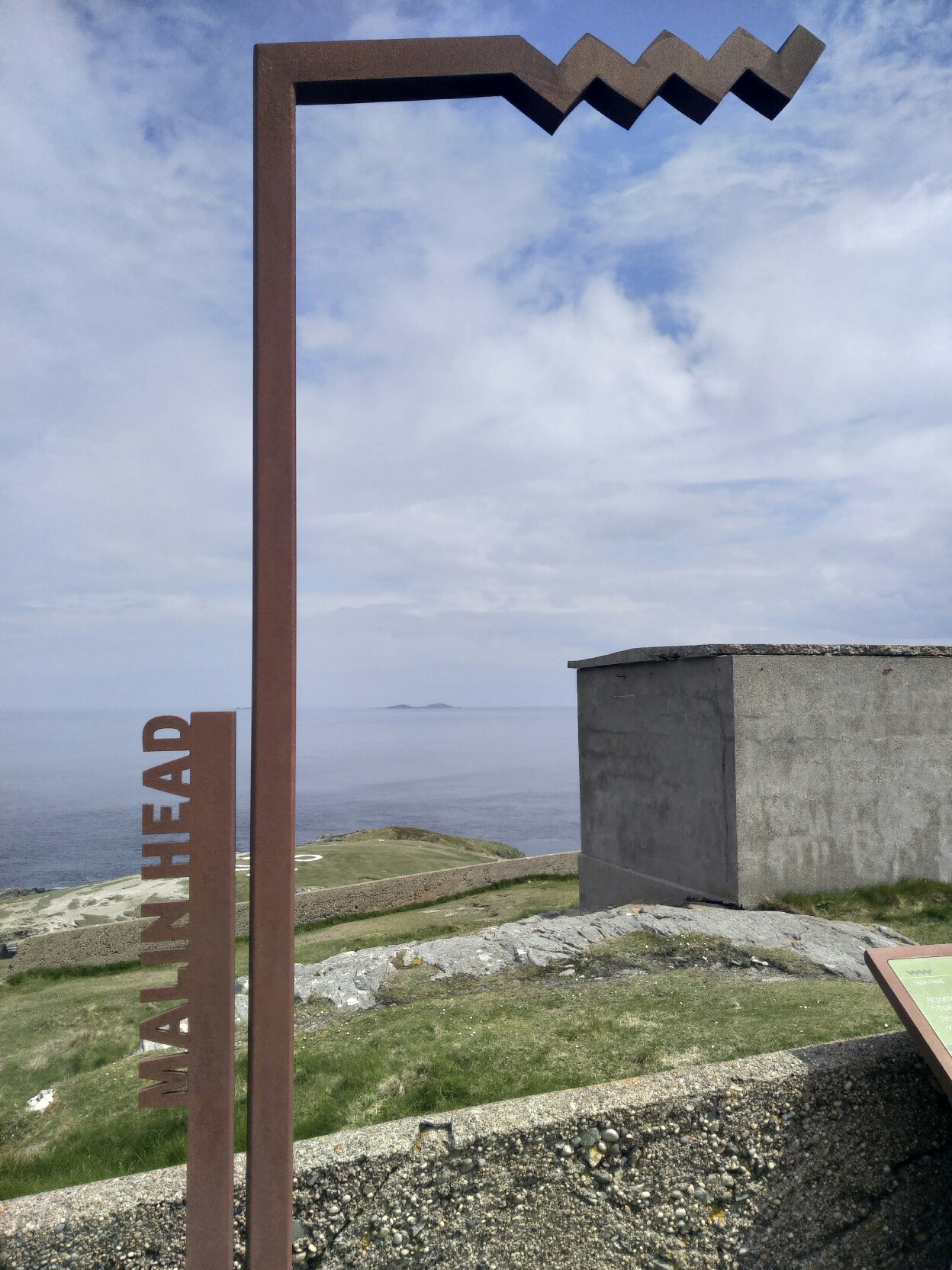 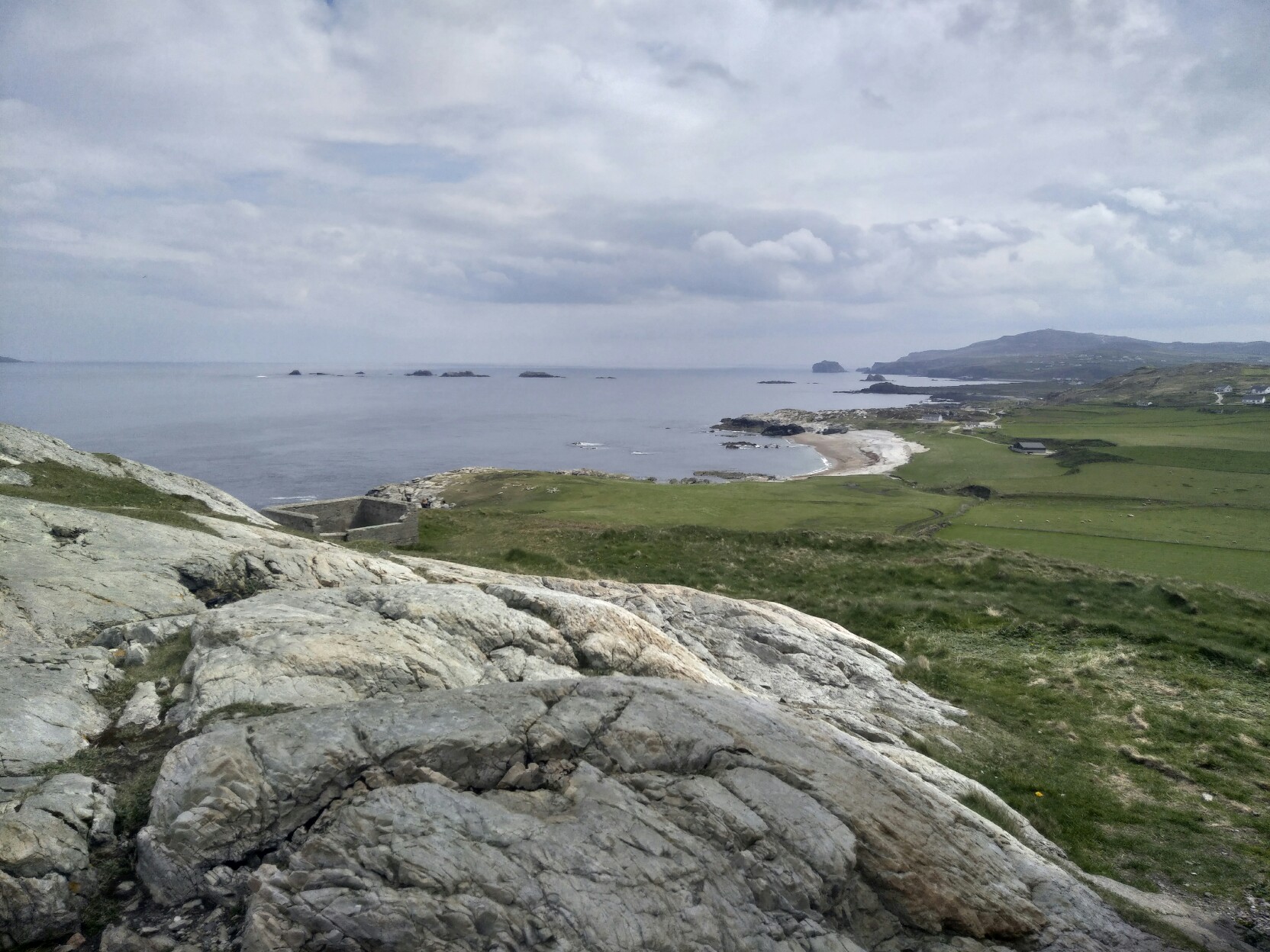 Back in WWII there was a marker here to help aircraft navigate, and probably more importantly, to remind them that the land below was neutral Ireland. Recently the market has been restored 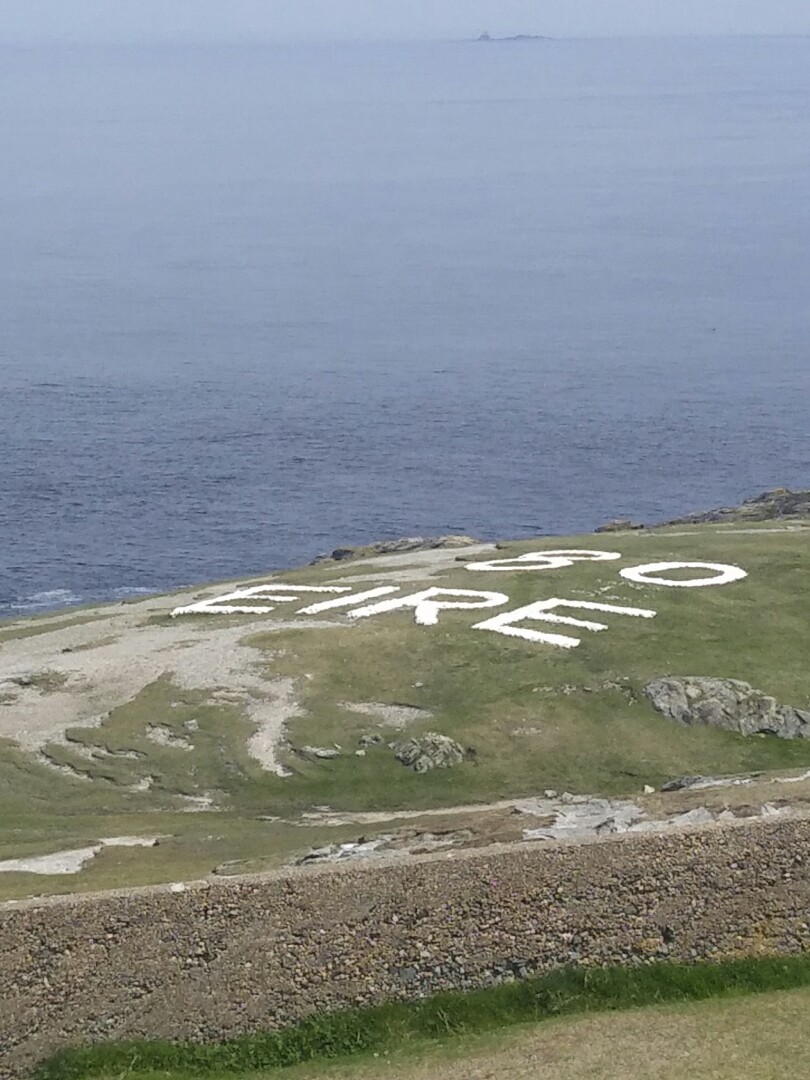 And after all The Game Of Thrones sites we've visited recently Liz has just informed me that Malin Head is a Star Wars location.

Onwards! Down and round to the town of Buncrana for essential provisions. Not a particularly exciting town, couldn't find a local baker although the butcher meant that not all our shopping came from the large SupaValu. Still it has its own whimsical mural 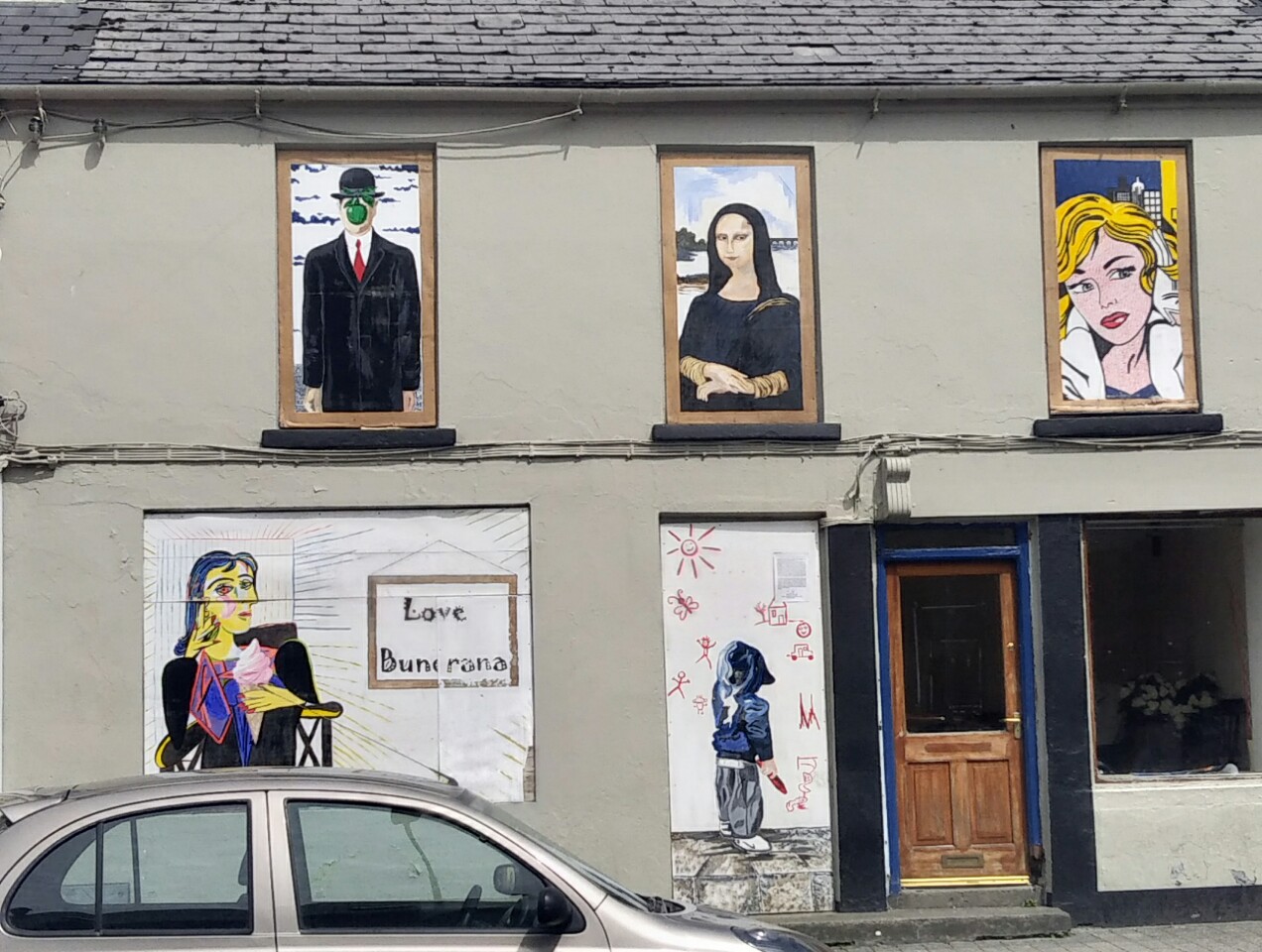 Wonder if you can make out the tiny white spec of a campervan in this photo. 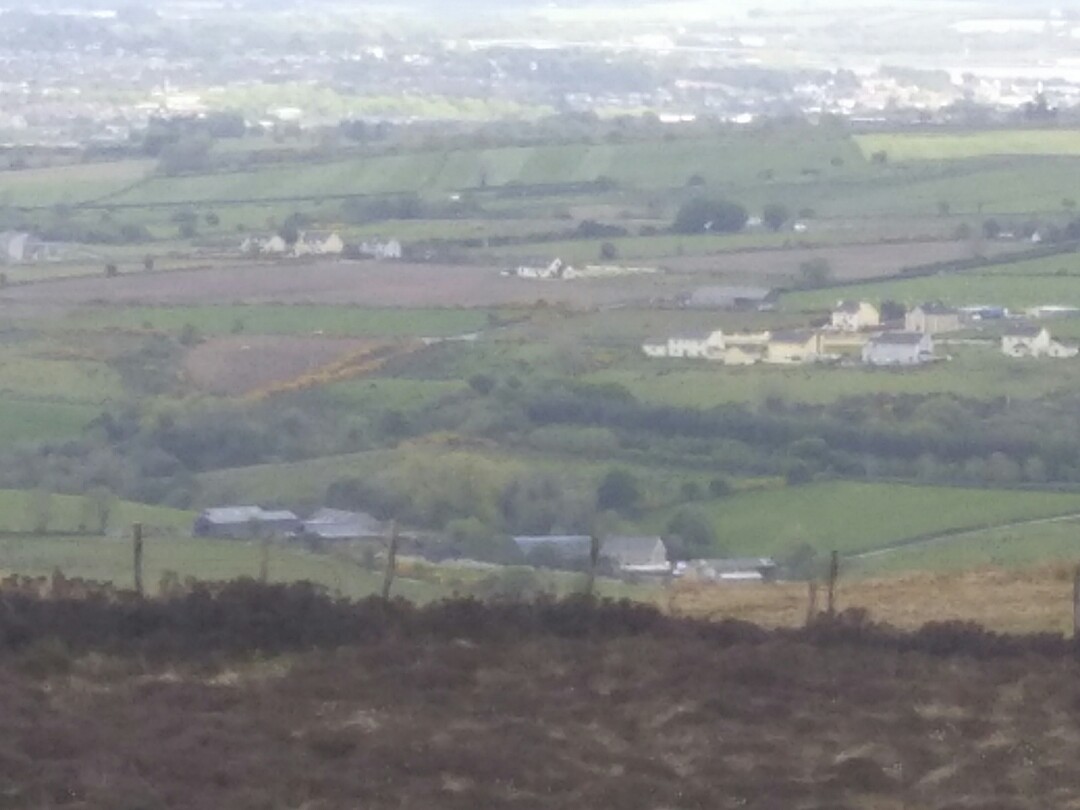 No, hint, it's in the lowest group of buildings, just to the right of the centre of the photo. Probably still not, unless you both zoom in and possess a good imagination! Anyway it's the campsite we've stayed at the last couple of nights and left 3 hours and 75 miles earlier. We're now on the Grianan Of Aileach, just a few miles away, looking back. The hill fort, is, naturally, on top of a hill. Fantastic views all around and on a haze free day ... 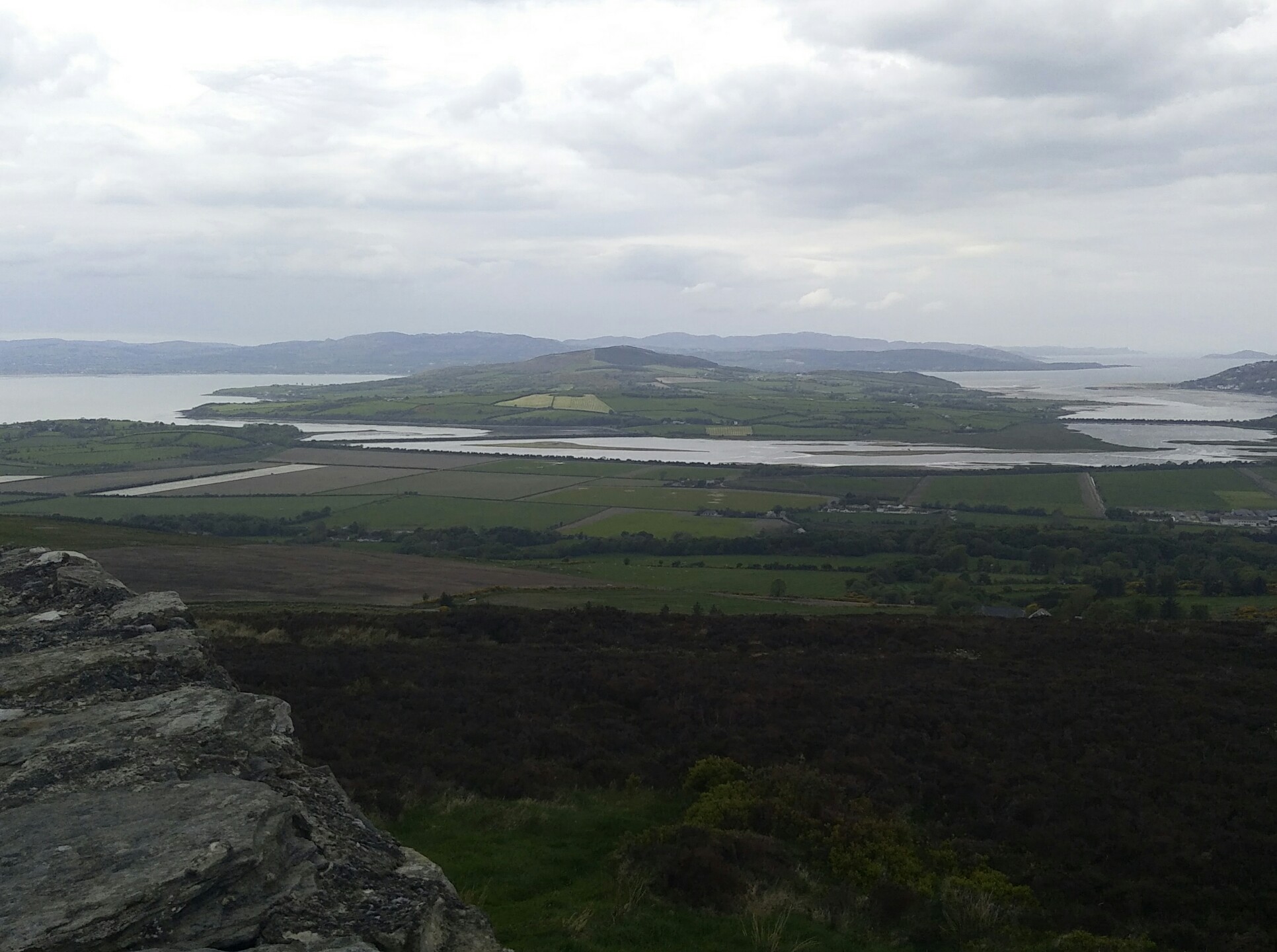 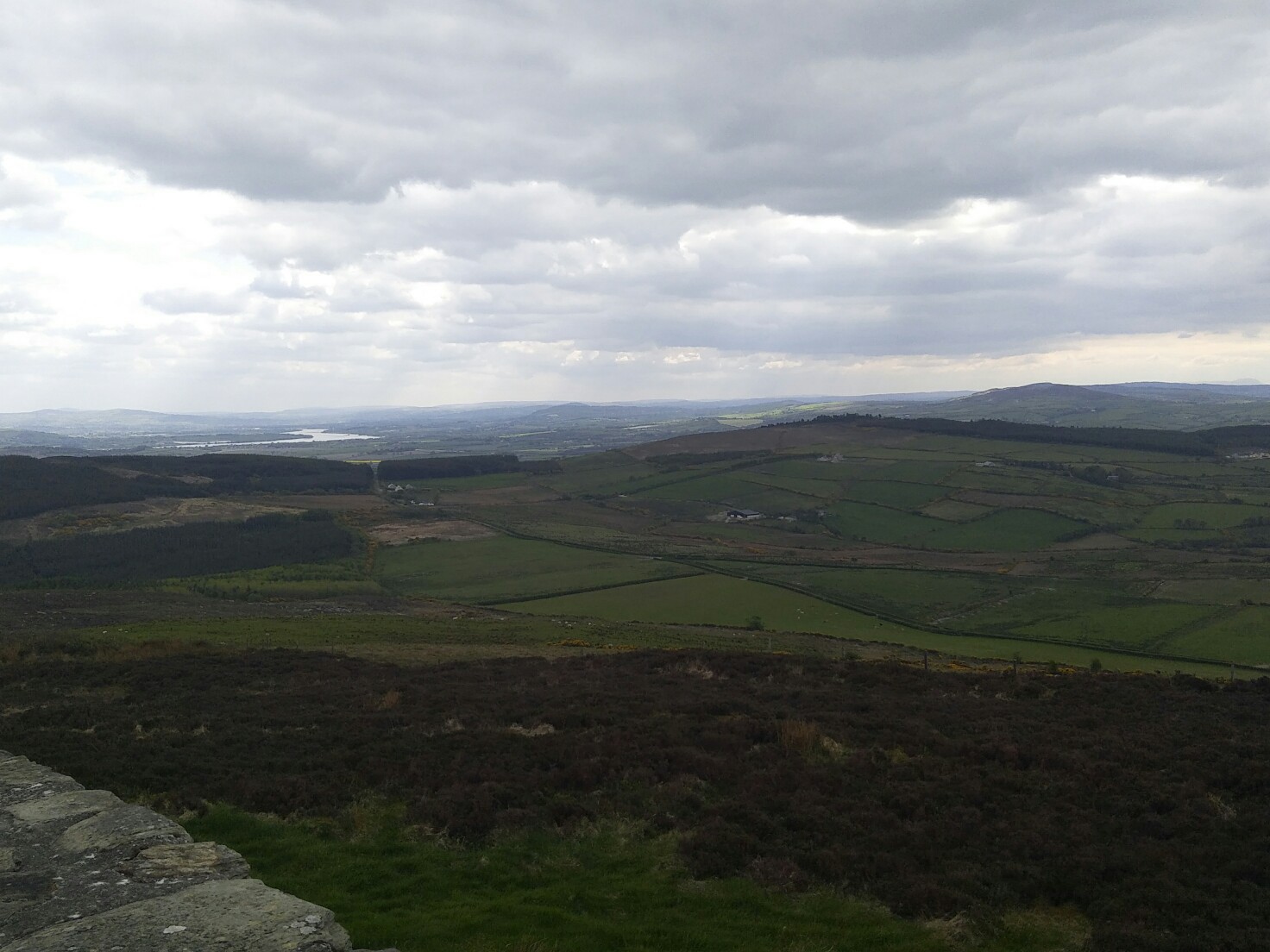 The hill fort wall had been wonderfully restored 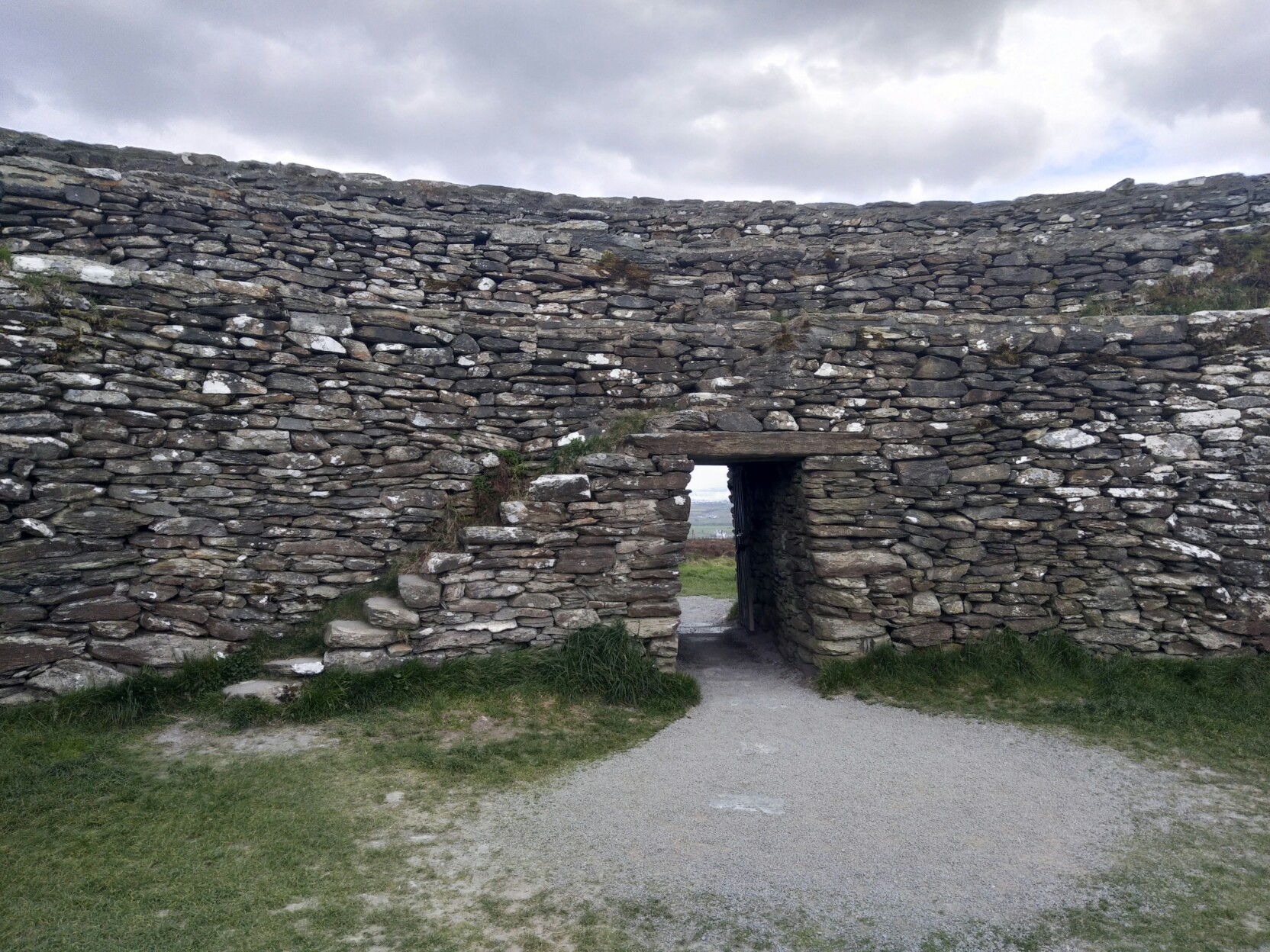 Mind you I wasn't the only photographer there 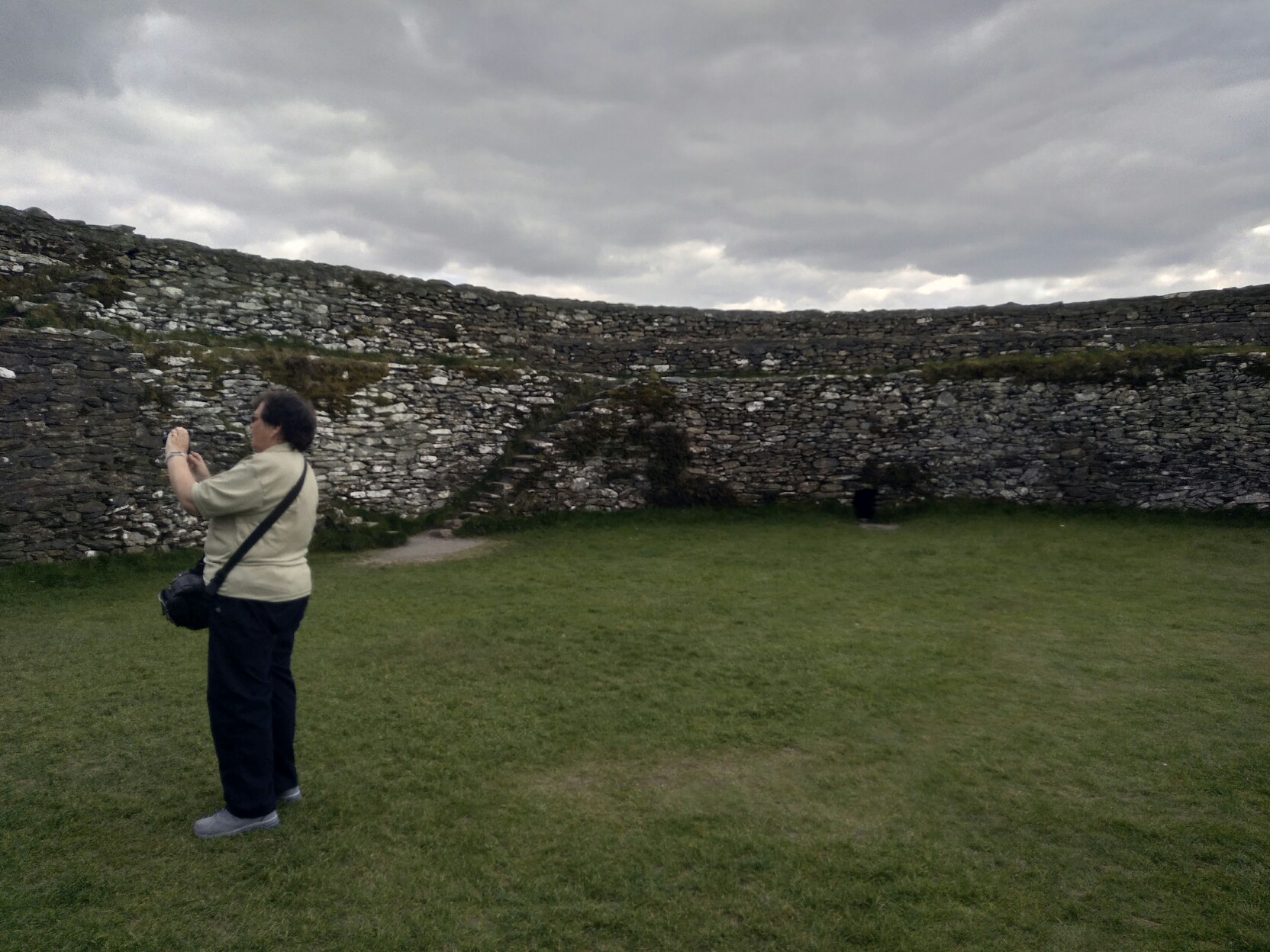 Actually we were worried that access might be on dodgy roads or with a long steep walk from wherever we found to park. But a new access road had been put in and it's so good that we shared the car park with 2 coaches and had to wait for the site to become a little less crowded!

Whilst in the car park we did our second van tour of the day. The young Irish couple next to us loved the idea. 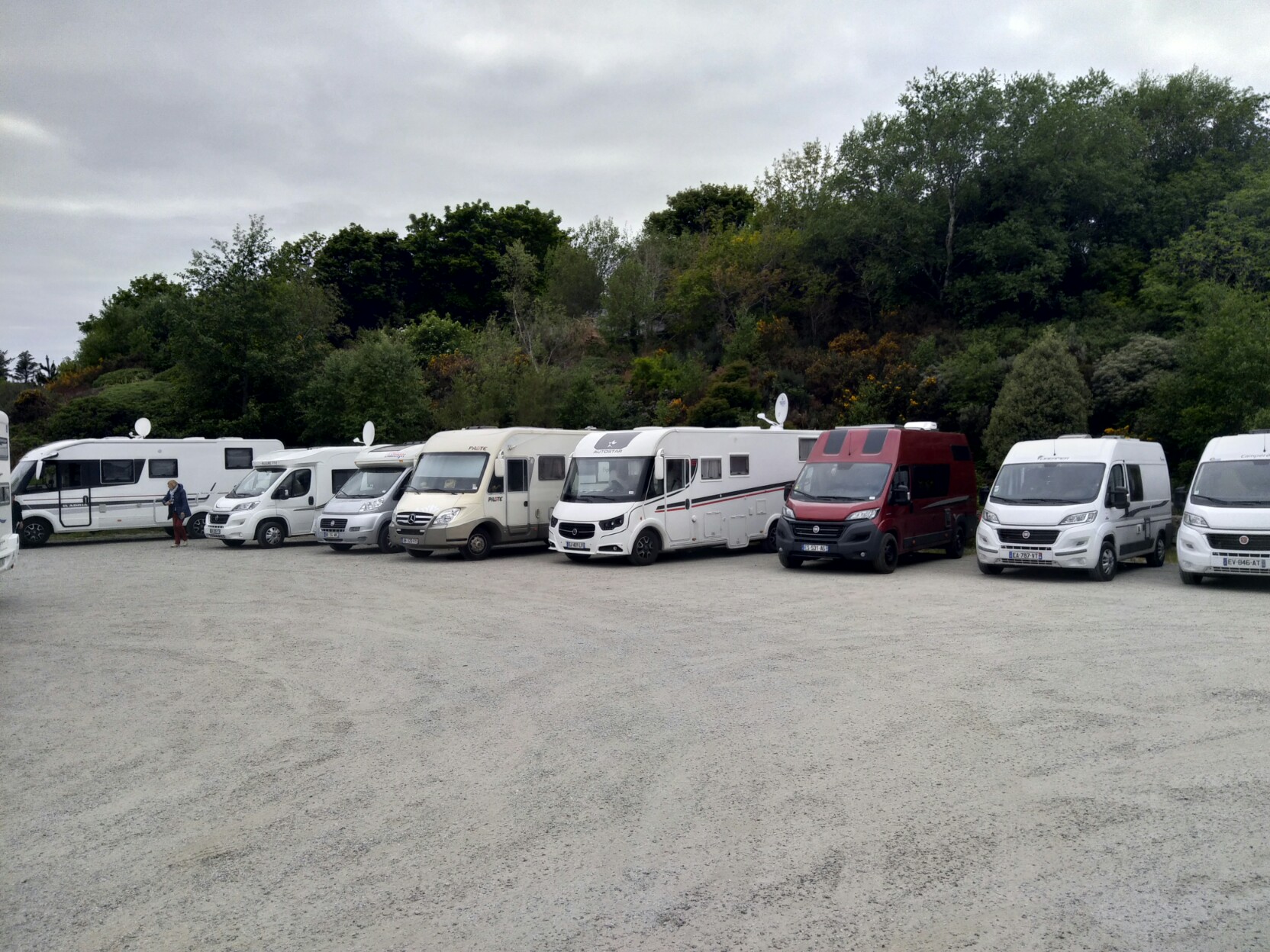 No that's not the campsite we are staying at tonight. It's the pub car park!! Looks like some French motorhome group have descended en masse. Luckily we find a small space in the corner of the car park and check with the owner that they don't have a problem. 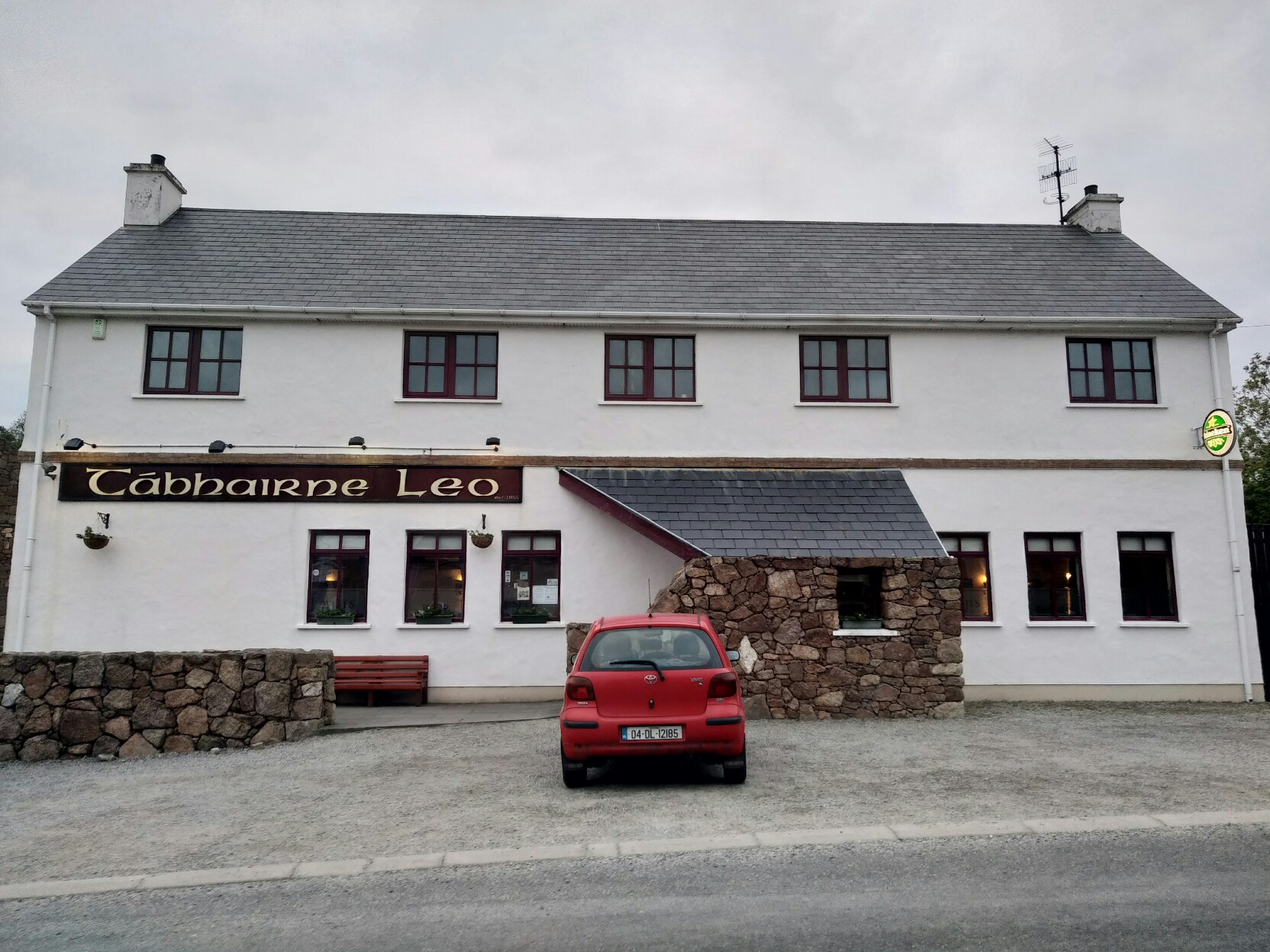 Notice the title? We are now in one of the few officially recognised Gaeltacht areas where Gaelic is still spoken daily and where signs and building names are primarily in Gaelic.

The pub has another claim to fame. A musical one. Clues are in the title of today's blog and the blog picture. Got it yet?

No? Want a hint, think Gaelic.

Still not there, OK, the river in the picture isn't Irish, it's South American. The Orinoco in fact. Yes this pub is home to the family of Enya and Clannad! Gold discs abound on the dining room walls. Hopefully there will be so traditional music starting shortly but we've already been treated to a little singing by our Gallic neighbors - le craic, peut-être?

Whoops, I forgot to put in Friday's 132 mile route. Here it is. Yesterday, Liz included a picture of Mount Errigal in her blog. I was driving so didn't get the opportunity. We'll

Last night I read up on Derry's history, the siege, the unrest, Bloody Sunday. Probably if any town in Ireland encapsulates the chequered history that has led to 21st century Northern Ireland then