Back to the mainland today. The 11:50 ferry means an early alarm call – We need to be off site by 10:30, there's washing up to be done, toilet to be emptied and stuff stowed for a trip. All done and at the ferry by 10:50. Not time to sit bored though as two vehicles ahead are a couple we recognised from last Sunday's Beltane ceremony. Morris Dancers, folk festival attendees so we had an interesting chat. All is good.
UNTIL – the ferry choreographer give me my boarding instructions, just follow that van and reverse on. Reverse!! I don't do reversing. I don't have a rear mirror view, only wing mirrors, the rear of the van overhangs, the reversing sensor get triggered by adjacent dust mites. I don't do reversing. Not just reversing neither, up the gang plank, then hard left then straighten out at just the right moment to get into lane. Why's he signalling hard lock? Ah, OK just missed that invisible pole that holds up some deck structure. Keep coming back, keep coming but I'm gonna hit. Stop! About 6” from the van behind. Phew! Then watch as the next vehicle reverses bumper crunchingly close to within the same distance of my own front bumper. At least we're pointing the right way to drive off.
The Orkney crossing can be rough, at least this short crossing is only in open water for about 20 minutes. A little swell today but no real problem. Most of the journey was spent outside watching the guillemots and razorbills but even in the bright sunshine it is cold.
Off and running, first stop Tescos Thurso to grab a couple of essentials including lunch. I'm not a huge fan of Tescos but they generally have free wifi and clean toilets, essentials for van travellers. Plan was originally to head for Durness on the opposite end of the N coast but Liz has found an interesting site about 25 miles further on, round the corner, on the west coast. So a change of what was never really much of a plan. Good fast roads, past Dounreay nuclear power plant and on, flat, gorse inspired heathland, And then suddenly the terrain changes, dramatic mountains, the A road downsized to a single track with passing places, twisting round mountain sides or past small lochs, or following a stunning rugged coastline. Progress drops from 60mph to less than 40 as the road twists and turns and planned passing place stops allow opposite direction travellers to make similar progress. This is a road for bikers (we see a few) and fast sports cars (a few of these too). On a slightly wider section I slow to allow a biker to pass and am rewarded by a chipping flying up and dinging the windscreen right in the middle of my line of vision. Rats! And its one of those dings that might just be OK but might slowly develop into major windscreen problems. That would almost certainly mean a detour to Inverness. Lets hope not.
It's a tiring drive, only just under 4 hours but a lot of heavy concentration. The campsite is a welcome relief and what a fantastic campsite, overlooking a bay with Red Throated Divers doing their diving thing. As we drove this afternoon the day turned into a really beautiful sunny day and so we were rewarded with quite some sunset. 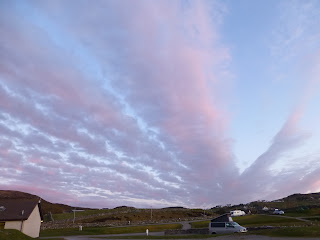 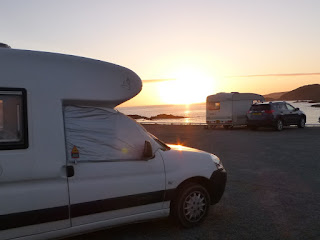 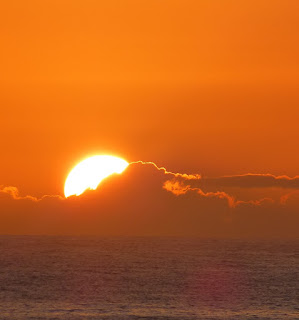 Off Orkney, now in Scourie on the NW coast. No phone data nor internet on the campsite nor in the village, except a very weak WiFi in the local pub where, hopefully this