My great-grandad Thomas Walter King was one of two master-at-arms on the ship and perished in that fateful night in April 2012.

God Rest His and all the other Souls

Belfast has not just a Titanic exhibition but The Titanic Experience. Being an Experience and a multi-media interactive experience at that, it doesn't come cheap but, ignore the tourist bumph which says allow an hour and a half. This is a two and a half hour minimum half day out and I could see it easily stretching to an additional hour or even two. We didn't read all the material, play with all the exhibits, not did we go back outside to visit the tug ship SS Nomadic, the last surviving White Star vessel, that tugged the ill-fated liner out of Cherbourg harbour.

It's expensive at £18.50 or a mere £15 each for us concessions. I jokingly ask the cashier for a discount because of my great-grandad. Bless her, she disappears to try and find her manager to authorise a complimentary ticket. Sadly the manager isn't around. Still it was a nice gesture.

The exhibition is huge over several floors, lots of interactive displays (no I didn't try sending CQD on a Morse key with a half-inch gap!). It covers the expansion of Belfast and the linen industry before moving on to ship-building and Harland and Wolfe itself before starting The Titanic story. Naturally there's a lot on the design and building of the ship. One part of the "experience" is a short cable-car ride taking you through tableaus of some of the various parts of the shipyards, complete with large halogen heaters so you got, at least, some impression of the heat of the rib forming yard or the riveter's oven.

On and through to reconstructions of cabins and lounges, complete with original White Star crockery and linen. One part of the display portrayed the deck with seating, and a wooden guard rail which you could look over to a blue sheeted sea beneath. This didn't really work yesterday because the low, bright sun outside shone through the backdrops for the sea and sky, obscuring detail. But I stood there for a moment to listen to the (recorded) seagulls in the air and casually leaned against the "ship's" guard-rail. It was vibrating, just as on a real ship. This was an impressive piece of attention to detail in trying to make the experience as close to real as possible. I was impressed.

Of course, the real test was how they handled the sinking. Two backdrops, showing the ship, lights still on slowly tilting before sliding beneath the waters. In the background the clatter (clatter not buzz) of Morse messages. Around the walls the simple text inscriptions of what Jack Phillips was sending in those fateful moments. No suggestions of panic, no screaming, no tableaus of folk clamouring for lifeboats. Just the clattering of a doomed ship crying for help across the airwaves. Maybe it was because of my great-grandad, maybe it was thinking of that young radio operator who refused to leave his post knowing he was the only contact between the ship and destiny, but I was deeply moved and stood motionless for several minutes in mournful respect.

Then the survivors stories, the clamour for the press to get such stories, the commission blaming Captain Smith for travelling too fast, probably influenced by the presence of Bruce Ismay on board.

The one thing I hadn't realised was the magnificence of Captain Rostron of The Carpathia. He understood the enormity of the problem and immediately set sail for the disaster area. In between times, he readied his ship for any survivors, had soup made, a makeshift hospital put together so that once on the scene no time very would be lost in making any survivors comfortable. A very much unsung hero!

The final part of the exhibition was a HD video cinema presentation of robot subs showing details of the wreck and the debris field and some nice interactive displays where you could explore the ocean bottom yourself.

Not enough time to visit the SS Nomadic.

My photos from inside the museum were poor. But here's one of the once dock where the ship was built 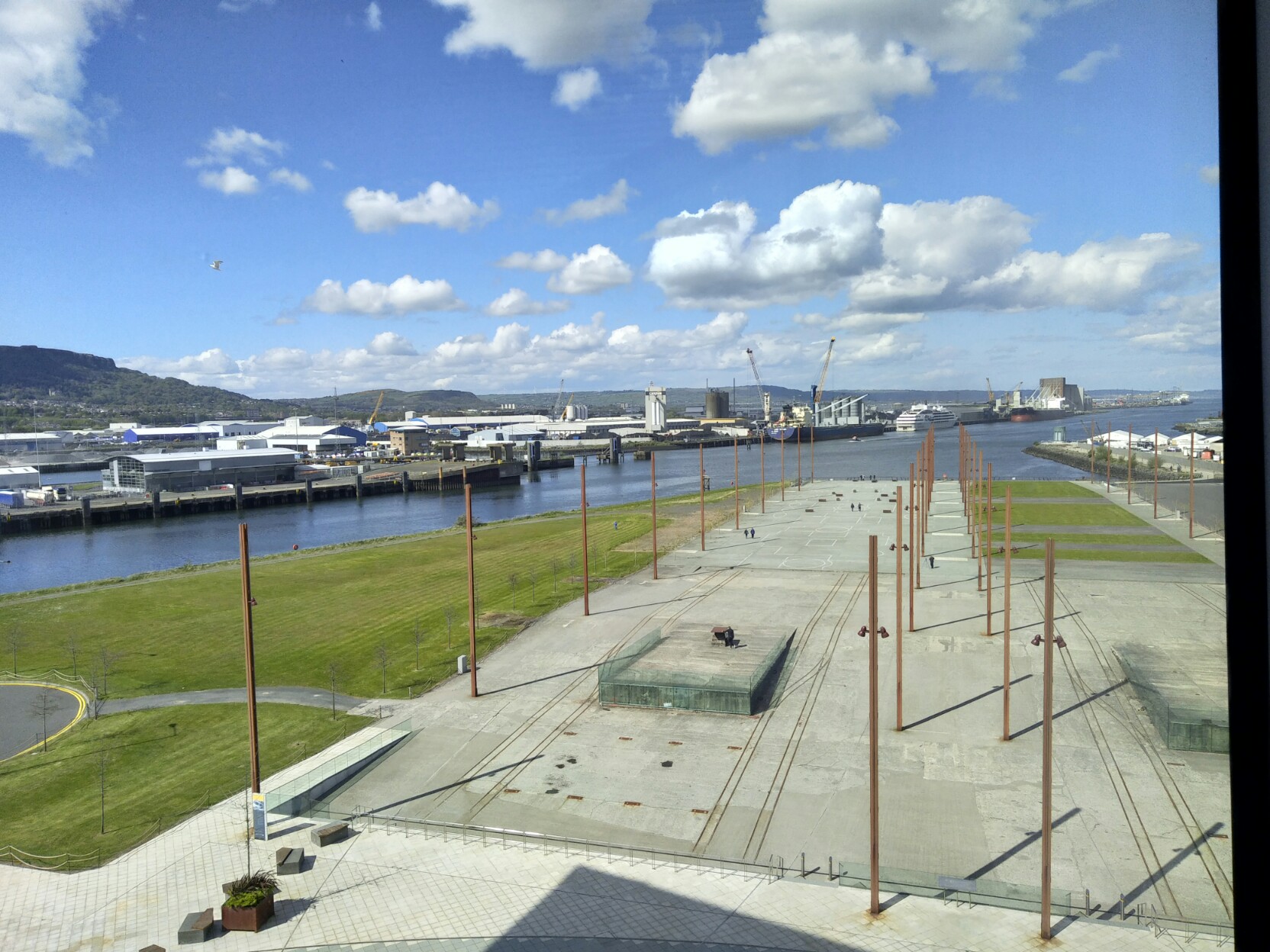 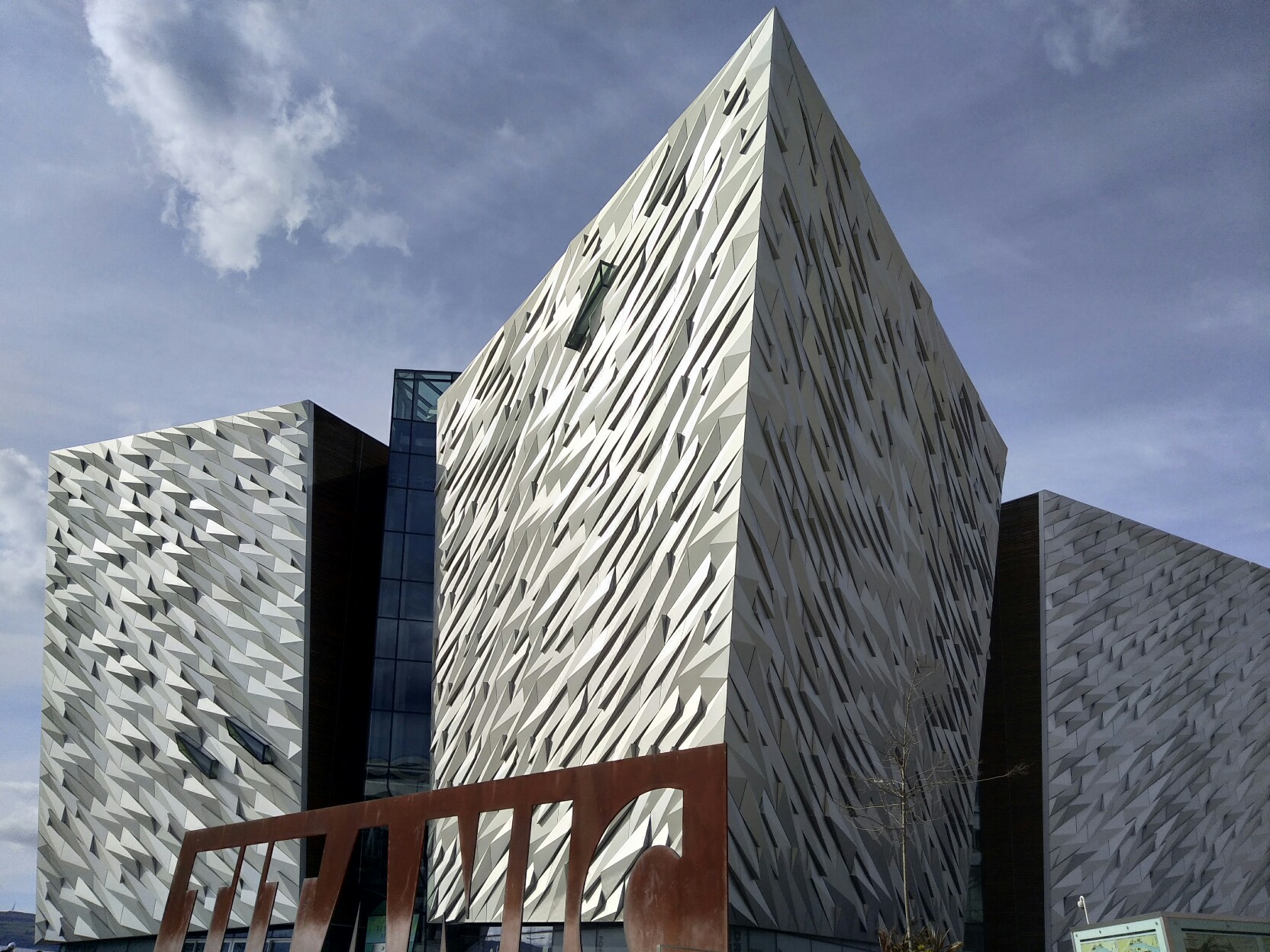 And, of course, no Harland and Wolfe photoshoot would be complete without a picture of the enormous iconic cranes Samson and Goliath. Sadly there was nowhere for a decent shot so this was the best I could do: 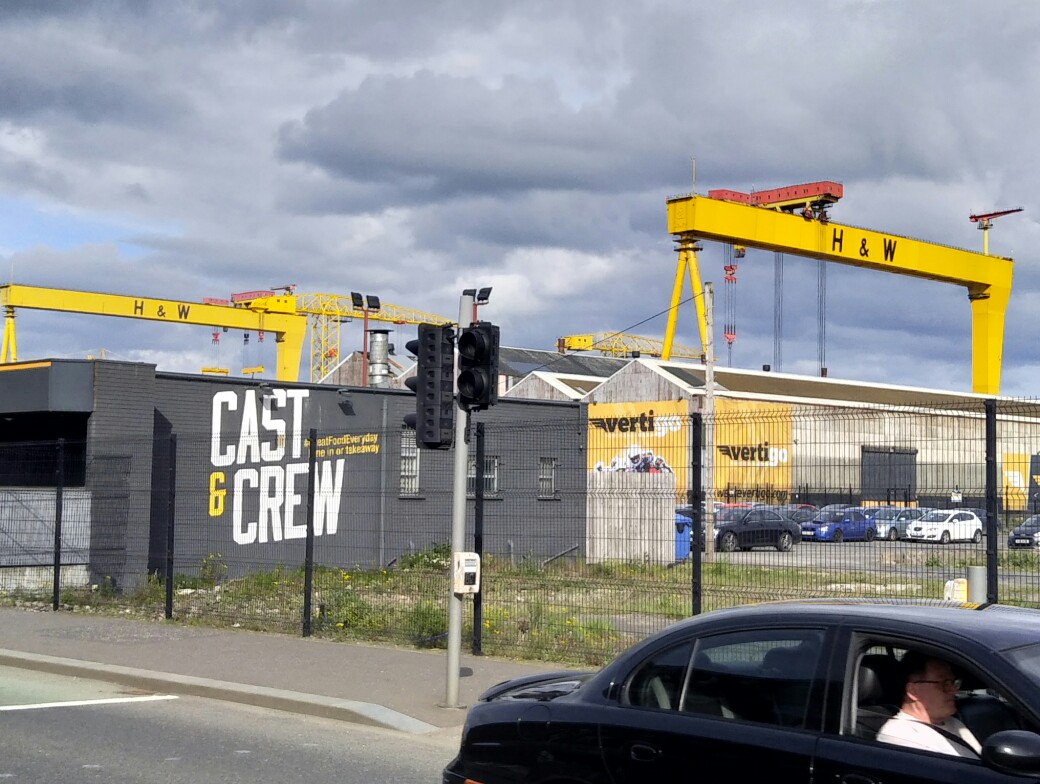 Prior to the exhibition we'd visited the memorial at Belfast City Hall. Here I broke off a piece of 'forget-me-not' and laid it in the memorial 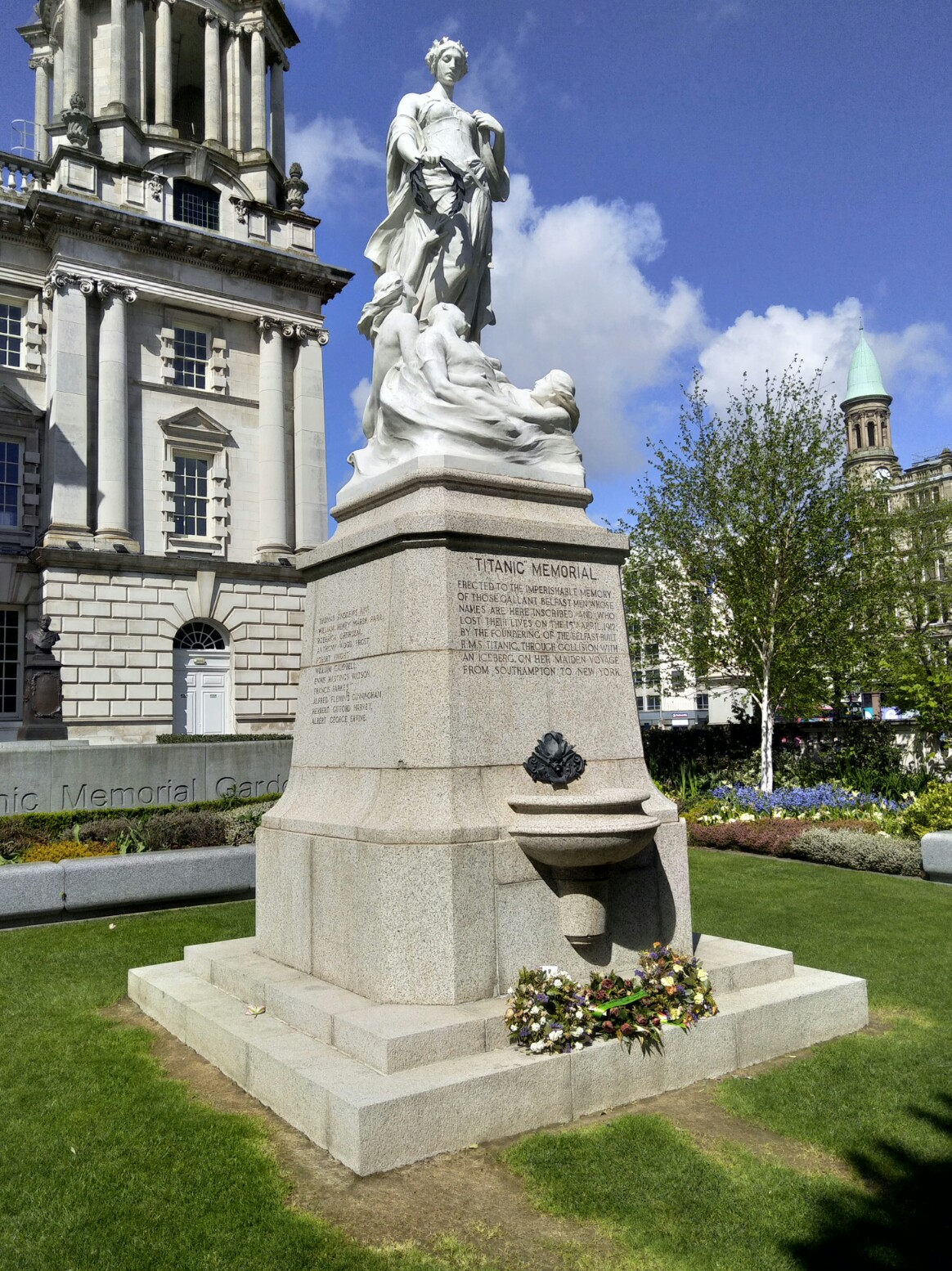 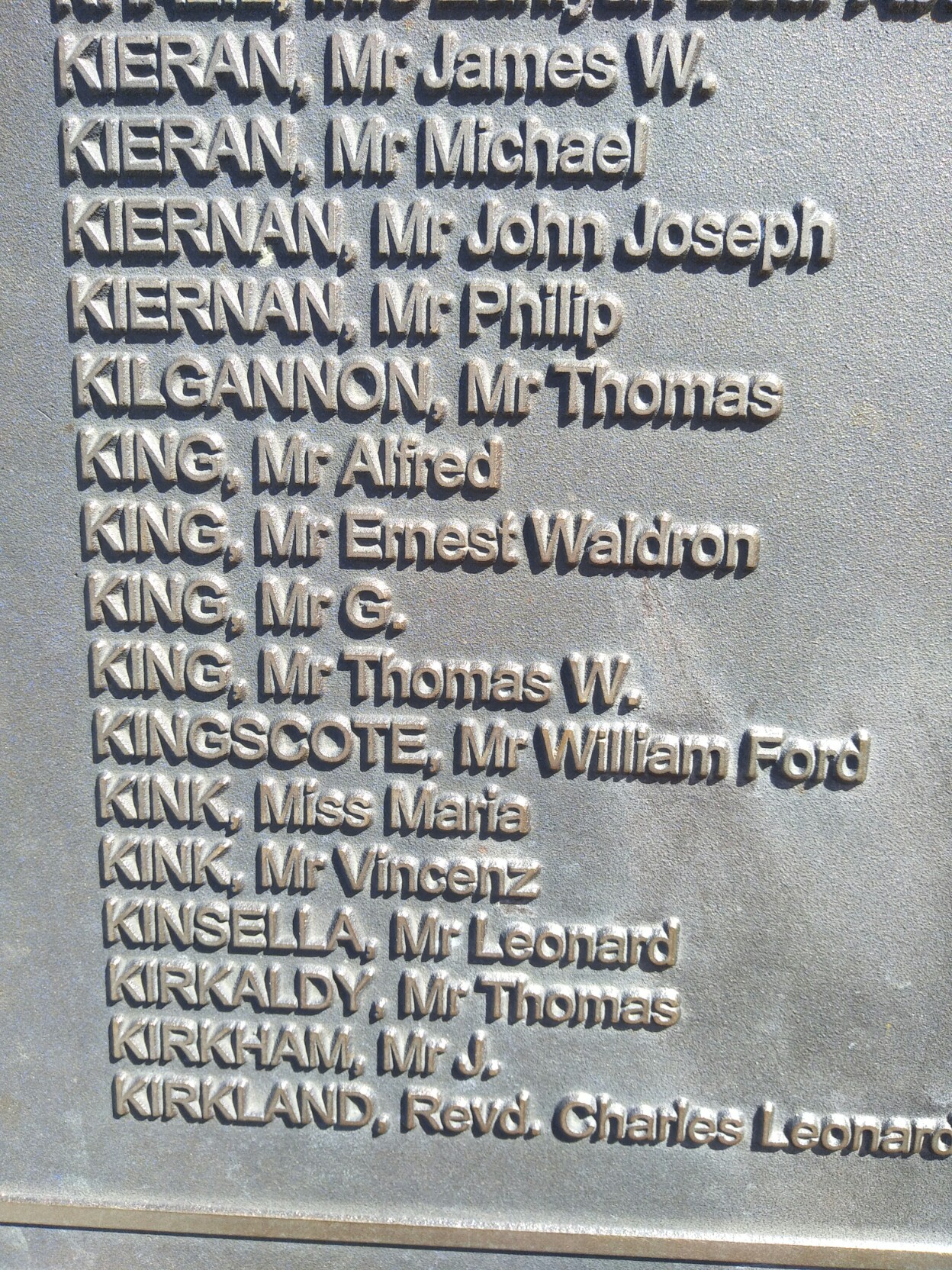 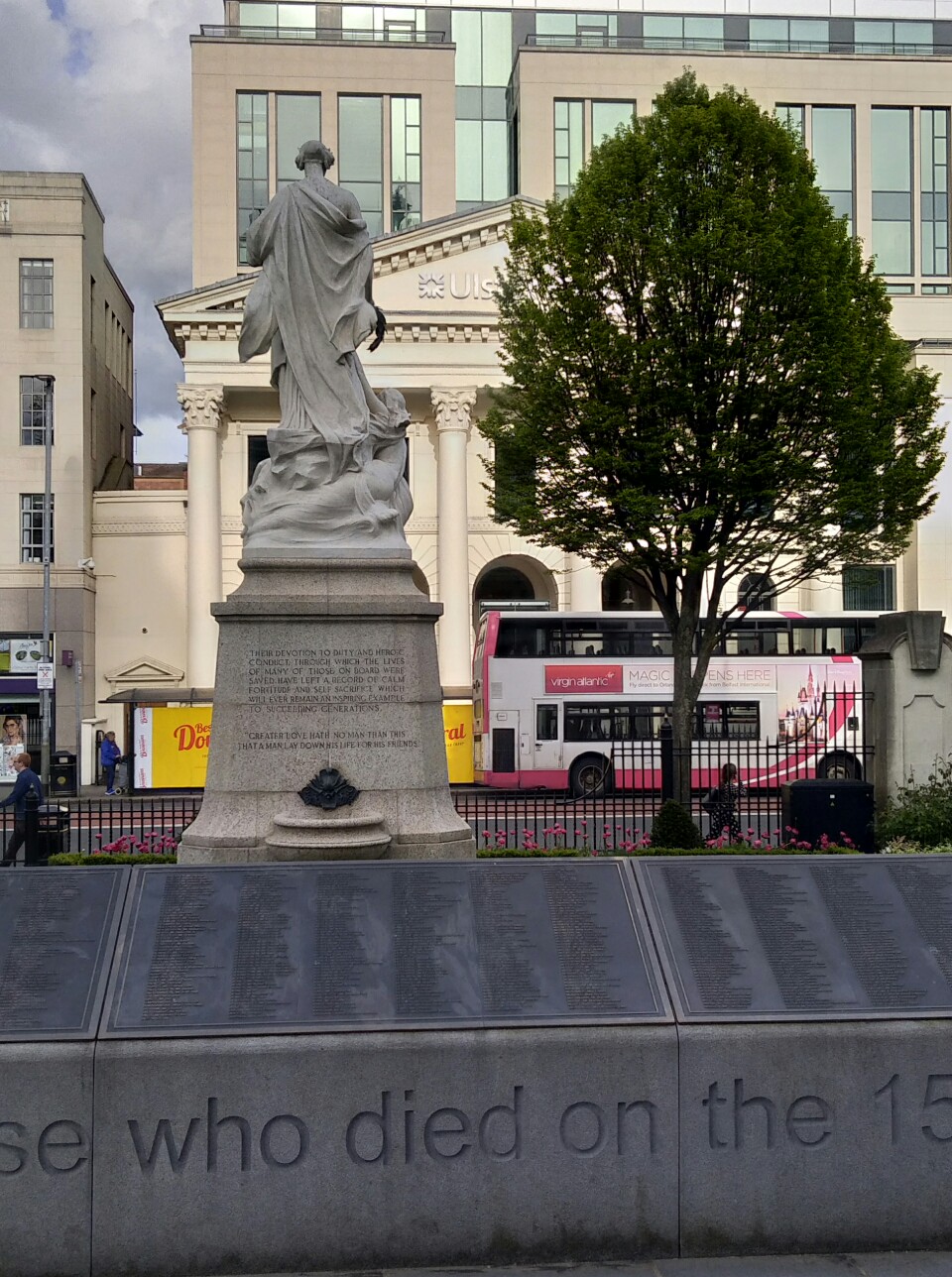 And no, today's post's cover picture is not of my great-grandfather himself. We have a poor picture of him at home but this is him as portrayed by Ron Donachie in the 1997 film.

It's another wet and very windy day, it really doesn't help us explore Belfast but at least we've done the stuff we really wanted. First port of call is the weekend market, only

To keep the peace, the peace lines, peace walls were erected to separate rival communities. The one along the Crumlin Road came down as recently as 2016 but many still remain and not

Two Drifters
—
In Search of Thomas Walter King
Share this