I didn't weep, not until leaving the gate to return to the bus. The enormity of it all left me feeling physically sick but what happened there is on such a huge scale it's almost impersonal and tears aren't the immediate response.

The museums themselves, for there are 2, Auschwitz Camp 1 where most of the exhibits are and Auschwitz II Birkenau where most of the killing took place, pull no punches. There is a floor to ceiling display case containing human hair, pounds and pounds of it. Another room has nothing but thousands of shoes. Another display is hundreds and hundreds of hair brushes. All removed from the victims. Already 10s of tons of human hair had been sent to Germany to be turned into cloth (there was a bolt on display). Hundreds and hundreds of thousands pairs of shoes and suits had already been shipped back to the Fatherland to aid the war effort. The display was a small percentage of the small percentage remaining when the Russian liberating forces got to the camp in Jan 1945. The gas chamber and crematorium in Auschwitz I was a small, inefficient affair and, after the killing machine had been perfected in Auschwitz II Birkenau, was converted into an air raid shelter for the Germans. After the war the original ovens were discovered in the woods and so the Auschwitz I crematorium was restored to its former gory and of course the tour takes you into the gas chamber, pointing out the holes in the ceiling through which the Zyklon B gas pellets would be administered and then on to the 4 ovens on the next door room. Harrowing stuff! The punishment cells, the wall where prisoners were shot and even the gallows where mass public hangings took place all failed to repulse after this, I had got inured to the total inhumanity of it all.

Or so I thought, until we traveled the 3km across to Auschwitz II Birkenau, the real death camp, and the enormity of it all struck home. An enormously long platform brought the thousands of prisoners in daily. Immediately after unloading, a cursory inspection and prisoners were sent to the left, to work in the camp or to the right, to be marched to the two enormous 'shower blocks' at the end of the platform. 90% went to the 'shower blocks'; were murdered in gas chambers that could kill up to 2,000 at once and then, after being shorn, and having gold teeth and jewelery removed, carried to the adjacent crematorium before having their ashes dumped in the local river. That 90% never even reached the camp itself.  The 'lucky' 10% that made it into the camp had a life expectancy of about 4 months for women and 2 or 3 times that for men before dying of exhaustion, malnutrition or just being unable to work, invited for a 'shower'. The 'shower block' gas chambers and accompanying crematoria in Birkenau were blown up by the SS just before liberation, in an attempt to conceal their crimes. From a tourist perspective this is a good thing!

Pause there and let those figures sink in.

And so to today's weird blog title. Let's imagine a 1920 German couple, struggling after the defeat in the war, giving birth to a tiny bundle of joy, Otto (say), that ray of hope dawning the brand new morn that Johnny Mathis sang about. The child coos and gurgles, craps and cries, crawls and takes his first step. Mutters 'mama' and'papa' and makes parents and grandparents alike so proud. Fast forward 20 years and Otto is now an SS officer recently transferred to Auschwitz Birkenau, beating those Jewish prisoners slow off the train and joking with comrades as he marches the prisoners off to their extermination.

What's happened in that 20 years? How has this ray of hope been turned into such an inhuman monster?

Were those 1920s Germans so different from us 1920 English? Saxon and Anglo-Saxon are the same blood stock, after all. Heck, our monarchy were of German descent. We share the same skin tone and practiced the same religion (they invented Protestantism, don't forget). They even drink beer and eat sausage like us, not the wine and garlic stuff of real foreigners!

What if Moseley had taken power in England, would little Johnny from Brighton (say) been gayly marching Jews off to their death? Y'know it's not beyond the realm of imagination to think that if little Johnny had been exposed to the level of propaganda and indoctrination that Otto had, then maybe, just maybe, he, too, would have turned out a brute. Cue Phil Ochs "There but for fortune, go you or I"

Now let's fast-forward 90 years. Do we really think that humanity has evolved substantially since the 1940's. There seems little evidence. But today's little Johnny is getting bombarded with propaganda that immigrants, particularly Muslims are cockroaches and vermin. That great British hero Nigel Farage stands proud in front of a stream of immigrants under the banner of "Breaking Point". Is little Johnny becoming indoctrinated? What if he has a right-wing teacher at school? What if he identifies with the extreme views of those peddlers of hate whose columns fill the Daily Mail, Express, and Sun (No, I'm not going to give that odious female hate-monger the oxygen of fame by mentioning her name).  Does he inch nearer toward that monster Otto then?

If there is one lesson from my visit today it has to be that humans are humans, whether they be black/white, English/German, Muslim/Jew, male/female, gay/straight or any other classification and each time any one of us makes a judgement based upon type then we start slipping down that path that turned Otto from the apple of his mother's eye to war criminal.

You can probably gather my faith in any form of goodness in humanity took a severe dint today.

Almost no photographs. Somehow the concept of a smiling selfie with a gallows or gas chamber in the background exceeded my threshold of obscenity. Here's a photo of the memorial. 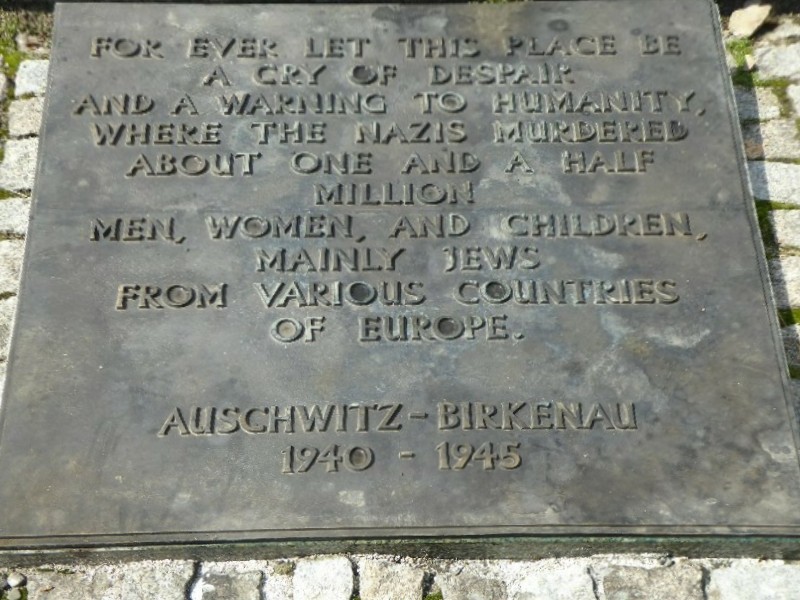 So I'm lying in bed, not a care in the world when I notice staining on the roof lining at the back of the van. Get up, touch it, it's damp. We have

No (attempted) witty title today. No photos either. A sombre and sobering experience demands a blog entry in keeping. I'm sure everyone has heard of Oskar Schindler, hero of Thomas Keneally's Schindler's Ark,