Plans for this trip after Munich and the Black Forest have always been a bit fluid. I thought that was mainly because we have already visited so many places in Northern France that we were uninspired. Hence choosing Strasbourg, way over in Alsace, a previously unexplored region. The reality is that it is France itself we seem to find uninspiring. Hard to put a finger on it but we just don't seem to enjoy France.

Strasbourg is a nice enough city. It has a fantastic cathedral nestling amongst the mediaeval buildings. 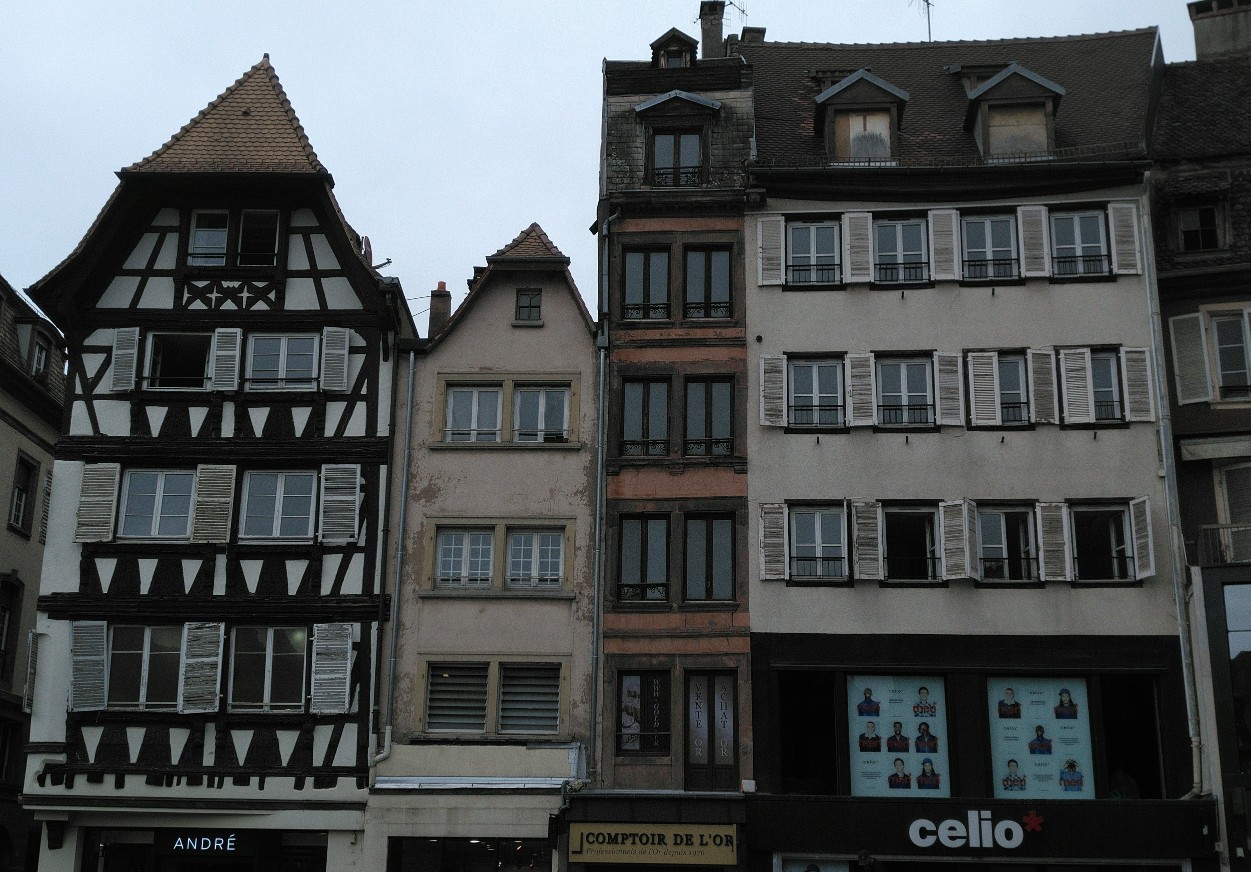 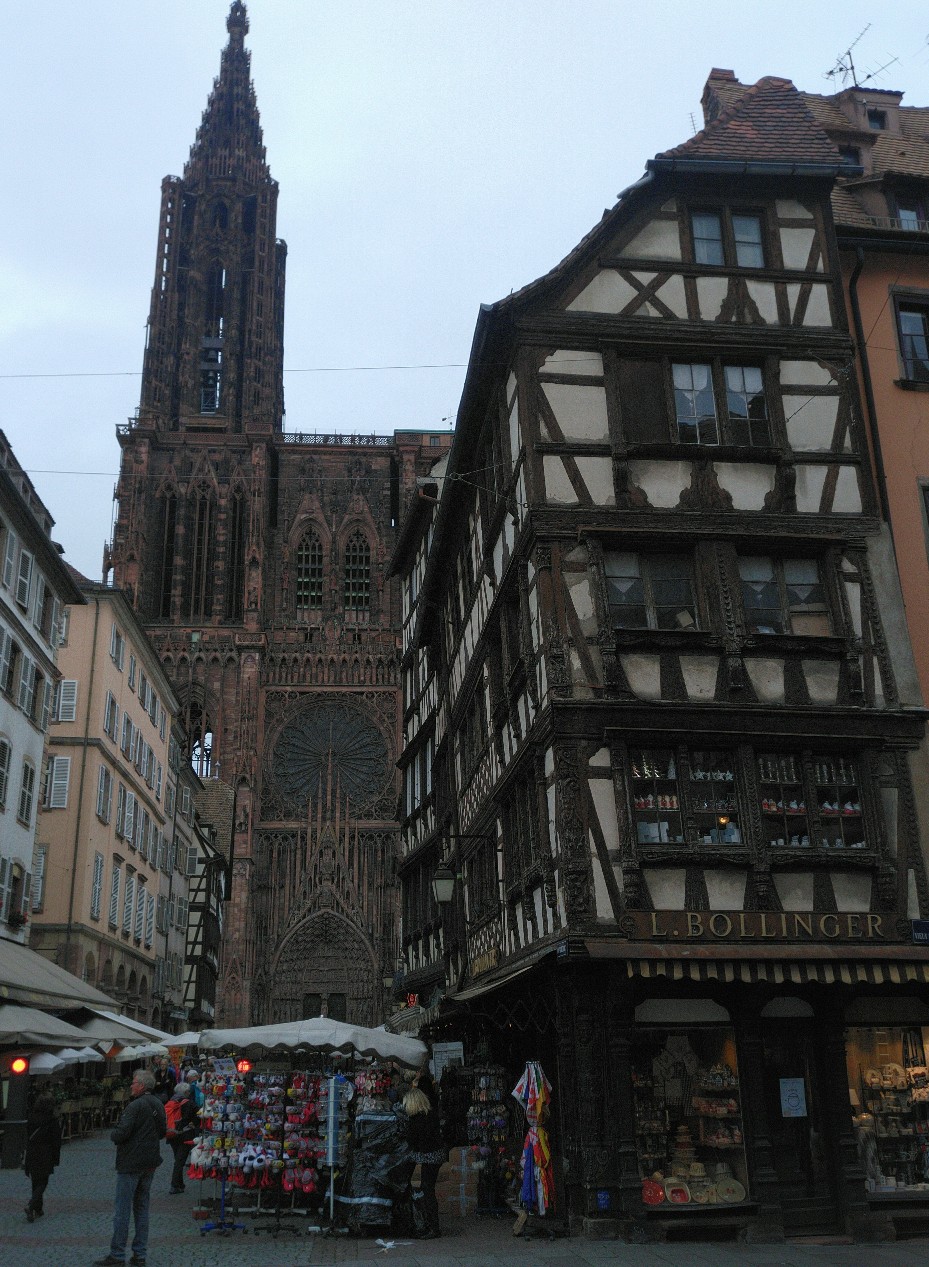 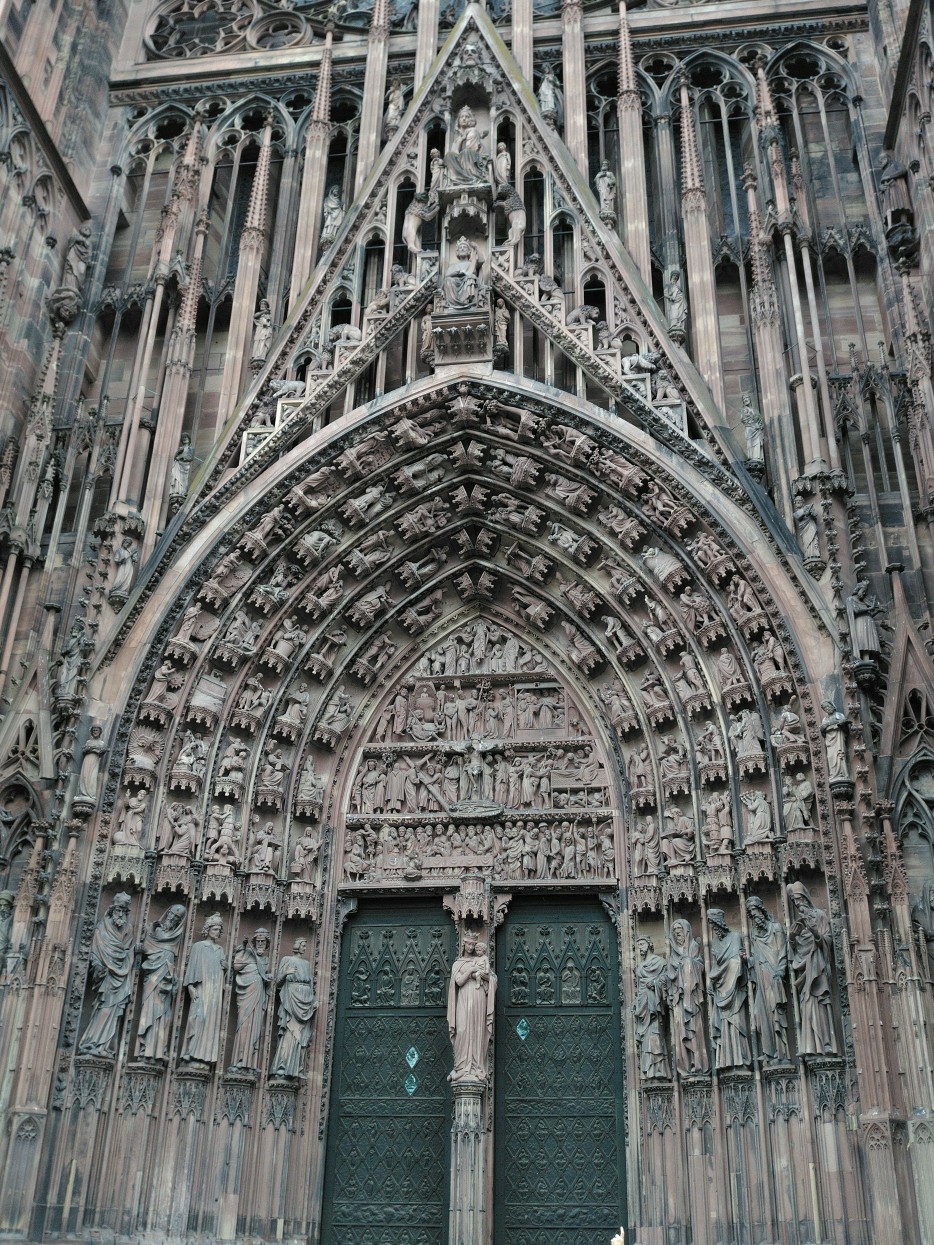 Sadly we only got to see the exterior as the queues were too long. There's a LOT of tourists here, far more than we thought. 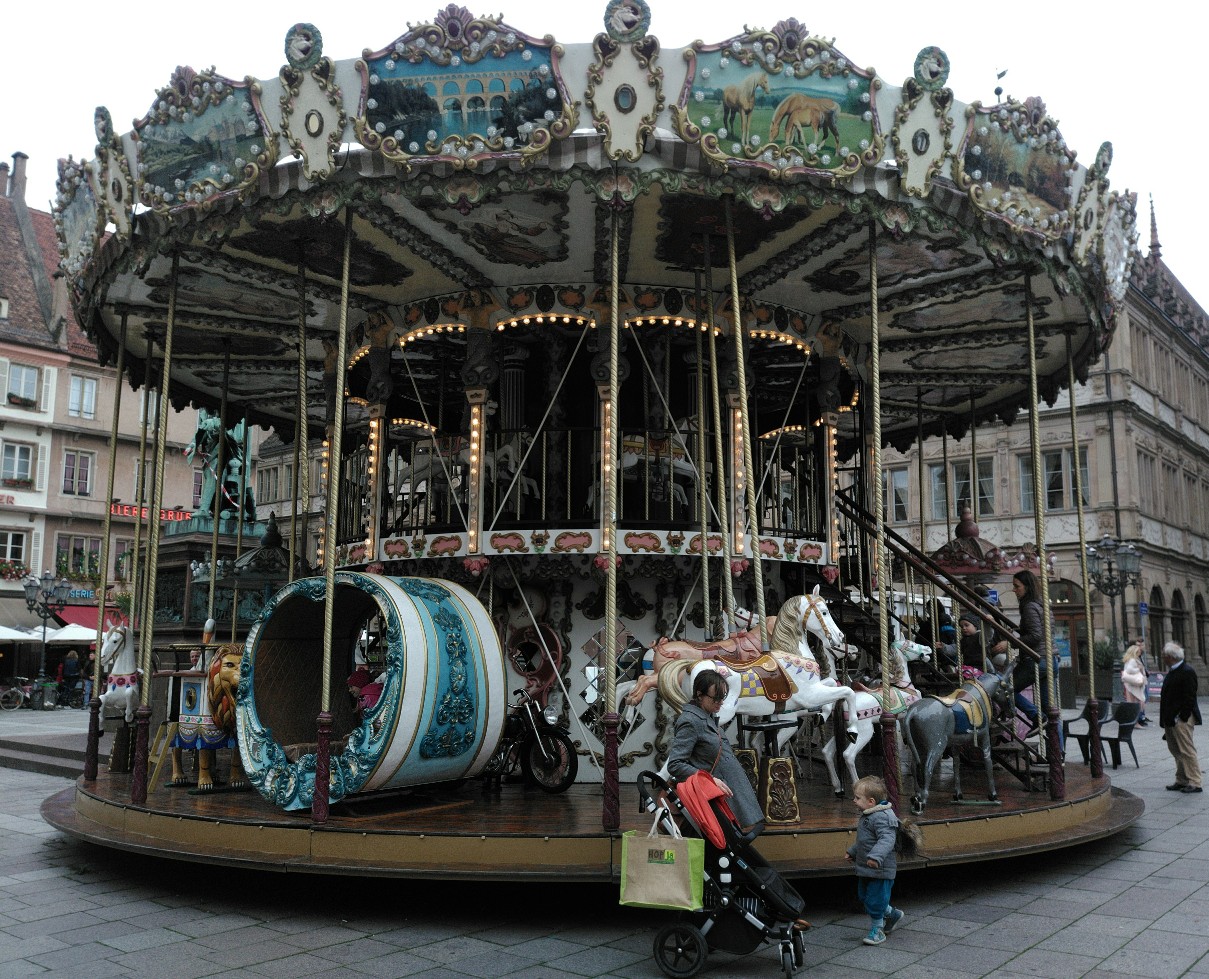 But despite this the city centre appears soulless. Being France it has marginally less international brands and the 3 main department stores appear to be Galleries Lafayette, Printemps and Monoprix. But still Body Shop, Hermes, Adidas, Apple et al loom large. And of course, such shops have little to offer to us pensioners who have everything but money and the will to spend it on fashion.

A few cordonniers caught my attention. Individual shops selling hand-made shoes but at €300 and upwards - maybe 20 years ago. There's Philbert games shop but despite trying hard nothing screamed "buy me". The highlight was probably an artisan cheese shop with HUGE wheels of Alsace cave aged cheese. But the tiny shop was overflowing with tourists and so deferred until tomorrow. Still the nearby boulanger had a cheese cake slice that was probably this week's entire calorie intake and very nice with it. Liz, of course, choose something far more sensible.

At least a beer and a rest will get us in the mood. I find the micro-brewery Au Brasserie on the outskirts of the centre. It's packed and we are amongst the few not eating. The beer is expensive €5 for 50cl and not particularly good (it was probably exactly as the beer intended but the distinctivd small-batch home-brew taste wasn't to our palettes). Still a couple of hours later we wander into Brasserie de la Lanterne where the beer was cheaper (only by virtue of it being happy hour) but significantly better. So good we had a second! Despite the bar having the worst toilets we've experienced in this European tour. We are definitely heading west, the blonde beer has far more bitter hops then we've encountered for a while, almost heading towards a UK golden ale.

Oh, one thing in Strasbourg's favour the excellent clean public toilets in Kléber Square were free.

On the downside, I twice got accosted by street-sellers trying to sell me selfie-sticks. Little do they know that I consider the selfie-stick the single most abhorrent invention of the 21st century. I must learn the French for "stick it up your jacksi" in case pestered in future!

Here's a couple of bits of street art, ancient and modern 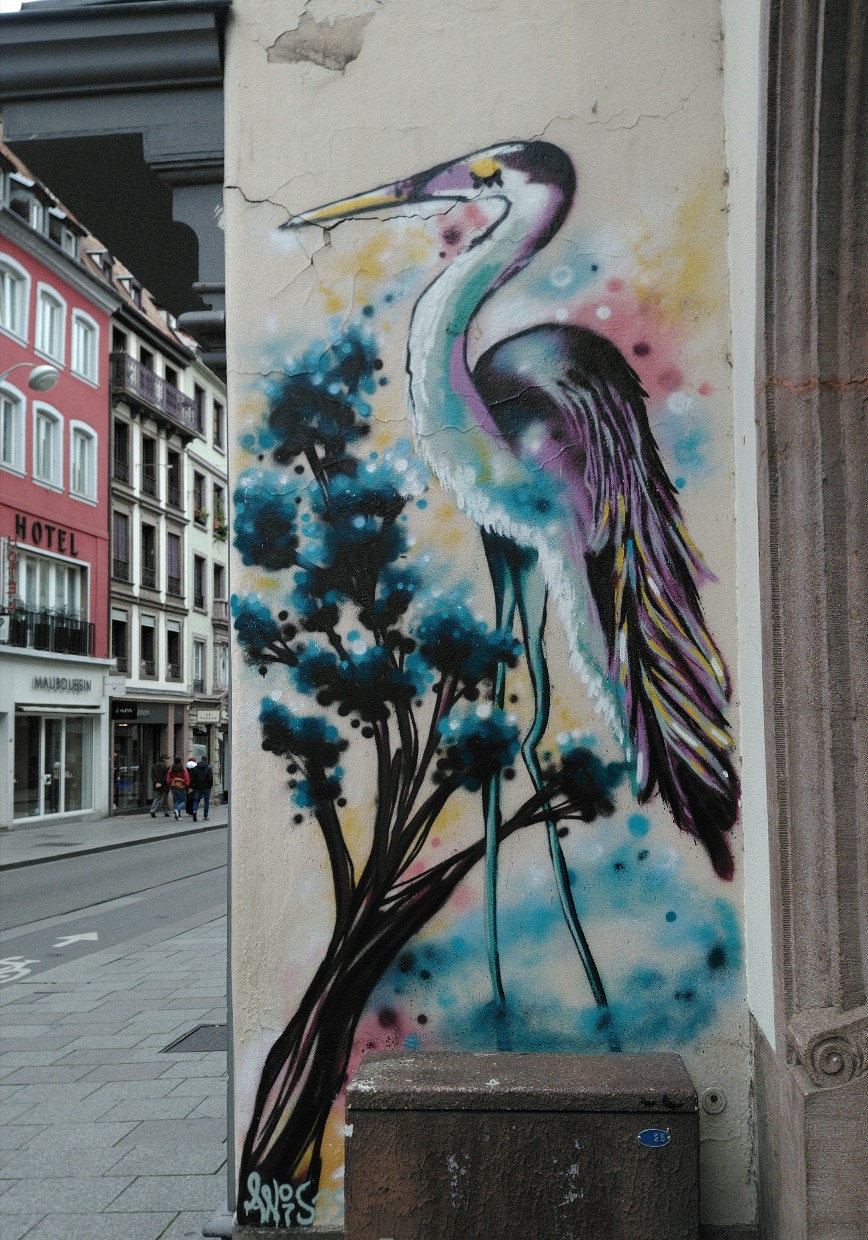 Dunno what dance we did, to what weather god but it was definitely the right one. The forecast for today was wet and we even envisaged it being our second only day this

Time for moving on. We've enjoyed this site. They've done the little things to make the visitor experience better. Like providing baby changing places and sinks in each toilet, but with a light