Trundled in some to Dresden today. Almost a change of plan, Leipzig seemed an interesting alternative but campsites were easier at Dresden. See, this holiday is on a total whim.

It's an easy drive but we have decided to make it a little more work by diverting to Wittenberg. You know, that place where Luther nailed 95 declarations to the door basically saying that the Pope and Catholic Church had no power to sell indulgences. Now the Pope, not liking having his revenue stream curtailed, set up a court at Worms and declared Luther a heretic. Trouble was, a lot of what Luther said made sense to many German Princes who were probably hacked off at what they had to pay the Pope and saw Luther as a cheaper alternative to salvation. And anyway Luther said you'll only go to Heaven if you are a true believer, and it doesn't matter how much money you pony up, it won't make a blind bit of difference. Here the Princes were rubbing their hands in glee, at being able to take that stash of gelder reserved for a new cathedral and use it to start a war instead. So they supported Luther and two different meetings at Speyer, rescinded and reinstated Luther's excommunication.

Anyway in the mean time Henry VIII had decided that since the German Princes could risk hacking the Pope of he could join in the fun, not purely for fiscal reasons of course but to justify divorcing Catherine Of Aragon - mind you it gave him chance to close down monasteries, so with the plunder from that and the monies not sent to Rome he probably made a bob or two anyway.

Of course, the Pope wasn't going to take this lying down and so, in true Christian fashion, the 30 Years War between supporters of the new fangled  Lutheran and Calvanist Protestantism and the Pope's merry band of Catholics ravaged Europe and saw 8 million Christians dead, all in the name of the same God and belief in his son. And people wonder why I'm an atheist!!

Still the simplicity of the Wittenberg church, even with the sumptuous Crananch paintings, was a refreshing change from the ostentation of many of the cathedrals we've visited.

Taking of ostentation, a traffic jam and road closure this morning diverted us around Potsdam past Schloß Sanssouci, Germany's response to the Palace Of Versailles. Driving meant I only caught  glimpses but it looked the a bit excessive.

Check Liz's blog out for some other random town we stopped at. It had lots of history including a 14th century church but I was more interested in turning it into a loo break, philistine that I am.

One sadness, hammering down the autobahn about 50m north of Dresden we saw a sign for Colditz and its castle. Sadly no time to detour. Shame!

The photos in my phone of the random town are average at best and Wittenberg is recorded on my camera and after another day of 5 hours driving I really don't have the energy, particularity when Liz almost certainly has better photos anyway. 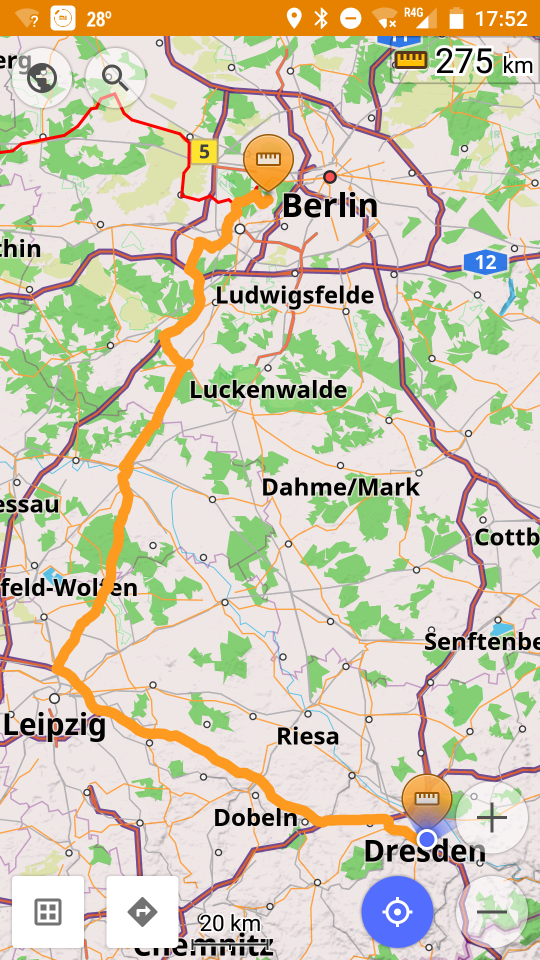 To the people of Dresden on behalf of yourself and all the others who worked on bomber command. You weren't aware that Air-Marshall Arthur "Bomber" Harris was a proponent of area

A wet start. Still chance to do the important van stuff, toilets don't empty themselves y'know.  Liz has set part of today's agenda. A trip to an art gallery!! Why the exclamation marks?

Two Drifters
—
Miles out of the way, just to see a door!
Share this