Well, I thought Liz said we were off to see the tomb of Columbo

. Yep, Iona today to visit the monastery and the place that Christianity first came to these shores (or more precisely, an island just off these shores).

First, an explanation. I’m sure many of the myriads of readers may be aware of my avowed atheism and so wonder why this trip has included visits to the Christian pilgrimage sites of both Lindisfarne and Iona. Quite simply that the entire future of English history, right up to the last Gulf War and probably Cameron’s policy was shaped by the events on those two island retreats 1500 years ago. Indeed, not just English history but World history too, certainly the current right wing Christian militia that leads to buffoons like Sarah Palin and Donald Trump becoming worrisome candidates for the most powerful job in the world. It would have been a different story had the Vikings prevailed earlier or the Scottish and Northumbrian kings resisted the sophistry of the early Christian evangelists. And to be fair, we did attend a (pseudo) Druid Beltane ceremony at the Ring Of Brodgar just to prove we treat all religion equally, with respect for those who believe as long as their beliefs don’t intersect with our lives.

Iona is only just across the water from Fionnphort, a 10 minute trip on the Calmac ferry. It’s a 1.25 mile walk from the campsite to Fionnphort and we catch a glimpse of the ferry and Iona abbey on the way. 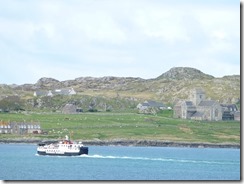 Fionnphort is the main port for both Iona and Staffa (Fingal’s Cave). It consists of one shop/post office, a pub/restaurant, a seafood vendor, the Calmac ferry terminal and a community centre, with a handful of houses comprising the community. It is not a big place! Iona only allows service vehicles and vehicles for residents so the ferry is mainly pedestrian and amazingly priced at only £3.30 return! It’s a calm uneventful crossing.

Iona seems to be run by the Brotherhood of Iona, a Christian community. It is surprisingly much more commercial than Fionnphort, with a bar/restaurant, couple of hotels and several craft and gift shops. Of course some of the gift shops continue the tradition of providing religious artifacts to pilgrims, although today it’s more likely to be a resin cast of one of the Celtic Crosses rather than a Holy Toennail Clipping from Saint Columba himself.

The abbey is maintained by Historic Scotland so yet more savings thanks to our English Heritage cards. It has an audio guide and lots of informative boards, pretty well done all in all. It is quite amazing to be walking on a site that has had a constant stream of pilgrims for nearly 1500 years and there is no doubt that many folk their today have stronger beliefs in the saint than we do. Still there is a lot of history here, much of it on display and the Celtic Crosses are magnificent as are the ornate medaeival grave markers, many with full size knights in armour sculpted on them. I hadn’t realised that the St John Cross, the one with a circle around the cross arms (as shown in the pics below) probably came into being as a simple feat of engineering – the circular bits are struts to hold up the weight of the arms on the early huge crosses. 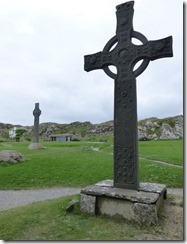 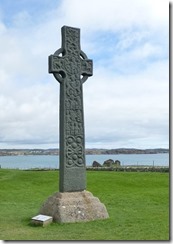 The most impressive was what is believed to be the original and oldest stone cross of this type anywhere. It was so massive that even the reinforcing ring wasn’t adequate enough to stop it breaking and damaging over the years, although many fragments have been put back together in this impressive piece in the museum 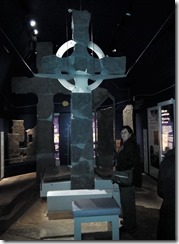 We wandered around for a few hours, none of the craft stuff really took our fancy, but then again almost nothing ever does. Liz did manage to find some Iona spun wool and the same shade in both arran weight (for a hat) and double knitting (matching gloves). Me, I found the most excellent book – Peat Smoke and Spirit – a history/geography of Islay told from the perspective of the 7 distilleries on the island. Perfect reading material in preparation for next week’s venture.

Apart from a gentle dig at the stupidity of religion in politics, particularly American politics today’s entry has been relatively rant free. Time to change that. Tell me, why Oh why, if someone can afford an iPad they can’t afford an iPhone, cheap Android phone or digital camera? I.e. why on earth do people use an iPad to take photographs? It is far more obtrusive than a camera, appears to take much longer to frame even the simplest shot and is just a ruddy nuisance for people passing by. Given the paucity of internet or even phone signal on Iona, even taking an iPad seemed a major act of folly. It’s going to happen, one day, one of these people are going to be in my way and will hear “Oh for f***s sake, go buy a camera!”  just as they are about to press whatever part of the screen constitutes a shutter.

Earlier I showed a picture of Iona from Mull, here’s the reciprocal along with a close up of the abbey from the ferry. 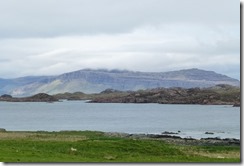 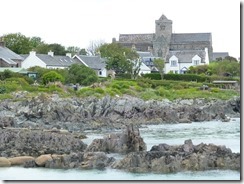 Back at 5, time for a pint in the pub The Keel Row at Fionnphort whilst waiting for their restaurant to open at 6. Liz enjoyed her salmon a little more than I did my beef which was good but nothing special. Still a nice walk back and just before we got to the campsite we saw 3 young lapwings, too young to fly, chasing after their mother. Not seen lapwing chicks before so that was a nice end to the day.

OK – no complaints. It’s been cold but we’ve had little rain since Edinburgh so were due some. And it’s good if it all comes at once. It started raining heavily

Off to Oban today on the 12:30 ferry. Lets work backward, need to be at the ferry port for 12, it’s an hour’s journey, best allow another hour for traffic

Two Drifters
—
Monday–a shabby raincoat and a squint
Share this