As a local poet once put it "The best laid schemes o' mice an' men gang aft agley. The idea behind choosing this campsite was a lovely walk along the bank of the Spey to the distillery at the far end of Aberlour, cross the river and back on the other side, taking in The Macallan distillery en route, after 6 or so weary miles we could then cross again to bide a wee while in the inn at Craigellachie before the final 2 mile stroll back to the campsite.An early alarm was set to ensure arrival at the Aberlour Distillery in time for the 10am tour. Ah but this is Scotland, the weather is what determines the day, not the plans of us humble humans. Heavy rain, snow, and pounding hail helped decide an alternate plan, all this before we'd even got out of bed!Plan B, drive the 5 miles to Dufftown to visit the Glenfiddich distillery and then back the other way to Glen Grant. Plan C, head towards Dufftown but get waylaid by the Speyside Cooperage. Yep, a working cooperage where they make, but mostly repair barrels. Got to be interesting, right? Dead right! This is very much a skilled manual task. Machines are few and have dedicated jobs but most of the work is done by hand: stripping the hoops off the defective barrel, selecting appropriate replacement staves, planing to fit, rehooping, re-liding and sealing. Did you know barrels are sealed with reed? Yep, they just dry reeds and stuff them around the lid edge to seal, amazing! It's a hive of activity and the large195l barrels are moved with consummate ease. The activity is enhanced by the fact that all the coopers are on piece work, getting paid per barrel. Those blokes work hard, bloody hard!Before the floor show the cooperage has an interesting orientation video. It shows the processes involved in making barrels. Interesting enough but it was the first smellyvision video we'd seen. At various points during the film (e.g. the felling of the American white oak trees, or the charcoaling of the barrel interiors) appropriate odours would fill the tiny auditorium. And during the charring scenes an intense halogen heater above the screen would provide a sudden burst of heat. Nicely done 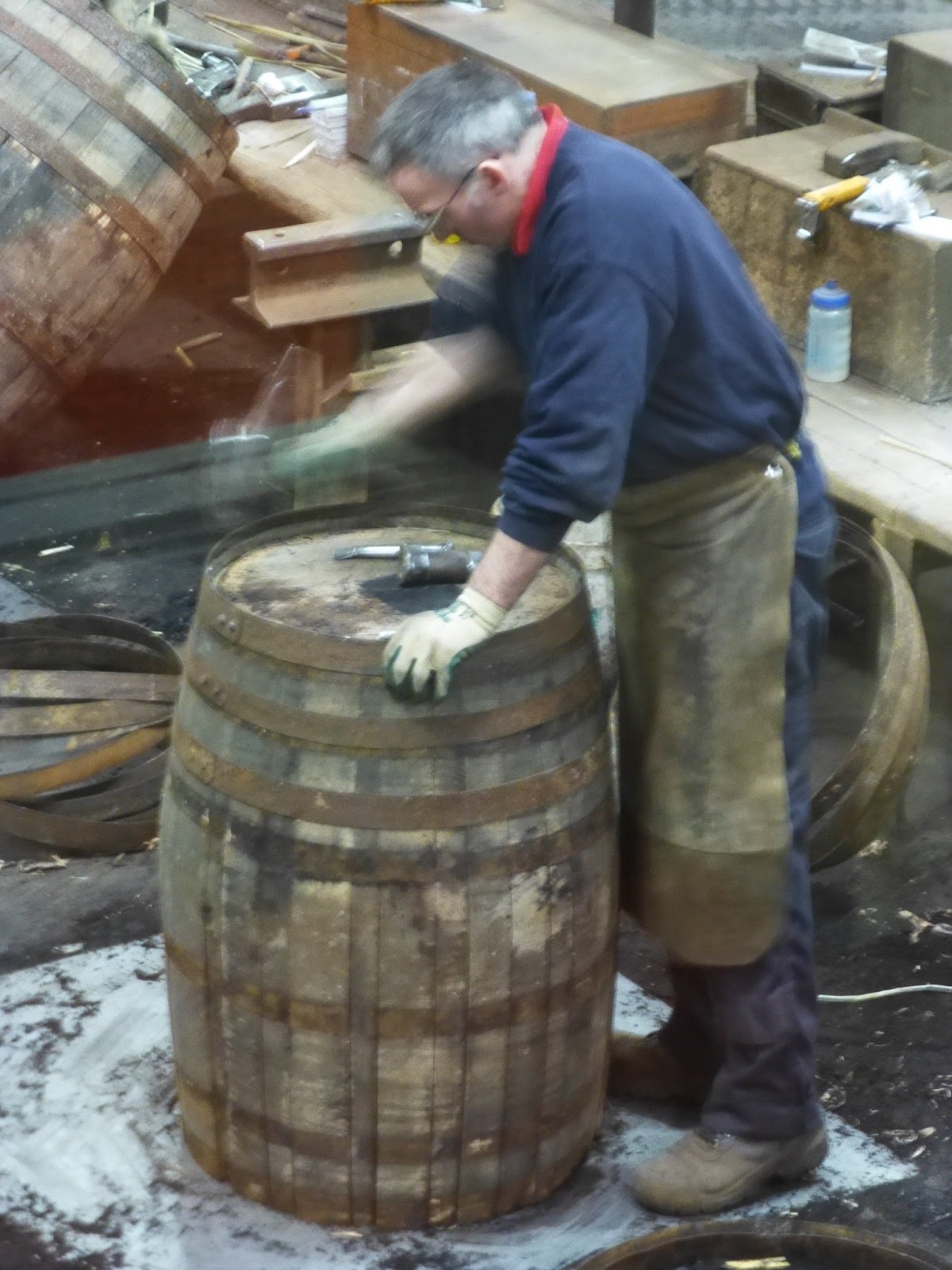 No time now to visit Glenfiddich if we are to be back at Aberlour for the 2pm tour, so a quick drive past and then U-turn to the Glen Grant distillery. We enter alongside a Canadian couple and none of us have come for the tour, just a look at the distillery and shop. The assistant is a little unhelpful at first and then mellows and offers us a free tasting. So we get a brief history lecture and try two different expressions. I mention we will probably buy a different one so she offers a third tasting of this. I'm glad I'd done my homework because this third one was exactly what I had hoped and we did indeed purchase a bottle. Liz did well out of this because I only drank half of my tastings to make sure I stayed well within the Scottish driving limit (which is much less than in England and Wales). Still the goal was to taste with a view to buy, and even small tasting was enough On now to Aberlour for the 2pm tour. It wouldn't possible be fully booked out of season. Oh yes it would! Rats, it seemed a good tour. Still we got a tasting of the expression I was interested in and did buy a bottle. I wasn't so worried as Aberlour whisky is commonplace and Waitrose stock the 10, 12 year old as well the the A 'bundah which is what we bought.No tour meant an early afternoon with weather unsuitable for walking (blizzard conditions during part of the drive this morning). Still the Walker shortbread factory is literally just up the road at the other end of Aberlour. Plan D, some a**hole in a huge motorhome has decided his behemoth vehicle is suitable to visit tourist attractions and to hell with taking up 50% of the car park (it didn't actually take up that much space but blocked access to that, much particularly for larger cars or small vans like ourselves). Inconsiderate prat! Still there's another shortbread factory (Deans) a few miles away so why not take a scenic route and enjoy the journey. The sun was shining and the sky was blue. We'd got at least another 10 minutes before the next snow or hail blizzard (and it was spot on time!). Now I should have guessed that biscuit factories would sell seconds. We left armed with a couple of different types of shortbread, some cheese oatcakes, all a fraction of shop prices.Where now? It's 4pm, we head back to the Walker shortbread factory where our haul is even more shortbread, oat and honey biscuits and oatcakes (again big bags of seconds)So 3 bottles of single malt (the cooperage sell a 10 year old single malt but it is a closely guarded secret who distills it for them), and enough biscuits to last a good few weeks' dunkings, along with enough oatcakes to keep the next month or so's cheese purchases company. A taste of Scotland indeed!

The wind is coming in from Greenland. That means, here on Speyside, it passes over the high Grampians (such as Ben Nevis) driving it upwards to become even colder and forcing it to

The van has a huge skylight. It is positioned so that lying abed you get a view of a decent chunk of the sky, ideal for weather watching or star gazing.So as

Two Drifters
—
Monday - a taste of Scotland
Share this