Today's blog entry is dedicated to Deborah, a lovely weaver in Lisburn.

There's a lot a places we'd like to see today but too many to fit into one day. Sadly the Ulster Folk and Transport Museum is one of those that must be missed, despite passing it en route to the nearby Girlguiding Ulster training centre Lorne. Girlguiding centres are a must to visit, that is a given!

Another lovely house and gardens. The shop was open so Liz bought badges and a couple of other mementos. And took several photographs of the wee fairy houses built into several of the trees.

Next stop Lisburn, primarily to visit the Irish Linen Centre and Museum. I say primarily because it seemed the right size town to have a decent Halfords. Remember a few days ago in Carlingford my windscreen wiper came adrift. Well I looked at it this morning and found that despite it working perfectly through that day's rain, I'd actually not mounted it correctly. Fixed that but it wouldn't lock into place, the locking lugs were broken. Not a difficult fix, I need a small thin bar of plastic and some tape. Hmm, small thin bar of plastic? My comb now has one tooth less! Solution jury-rigged into place we said we'd look out for new blades, they wouldn't hurt being replaced anyway. Liz found a Halfords conveniently on the outskirts of Lisburn, perfect.

As we near Lisburn it is obvious that something is afoot. A sign reveals that today is the annual Lord Mayor's Carnival, complete with parade. Many of the roads leading off the main road are guarded by police and I suspect parking is at a premium. Rats! Actually Halfords is merely half a mile out of town and despite police on the adjacent traffic lights it's car park is accessible and half-empty and has 3 hour limit. Ideal!

We use Halford's database search to find exactly the correct blades based upon our registration. Easy - or would be if those blades were actually stocked. No, not sold out, neither the Halfords nor the Bosch blades of the appropriate numbers even existed in their rack. Time to call an expert. He does the same search from behind the counter and comes up with a totally different blade number. They are sufficiently expensive that in a rare moment I decide to pay for him to fit them. Credit card transaction completed we trundle off to the van where it is instantly apparent that the blades are way too long. So much for their database. Now because he's been paid to fit them it's his problem. He measures the old blades and disappears to find some the same length, refunding my credit card too. These are fitted, tested and my £4 fitting fee also included him dumping the old blades and packaging from the new. Money well spent, methinks!

As we walk to the museum the streets are lined - the carnival parade is obviously imminent. We'll give it a miss. Or so we think! The museum is closed until after the parade.

A selection of carnival photos, tall exhibits were the order of the day and stilts loomed large 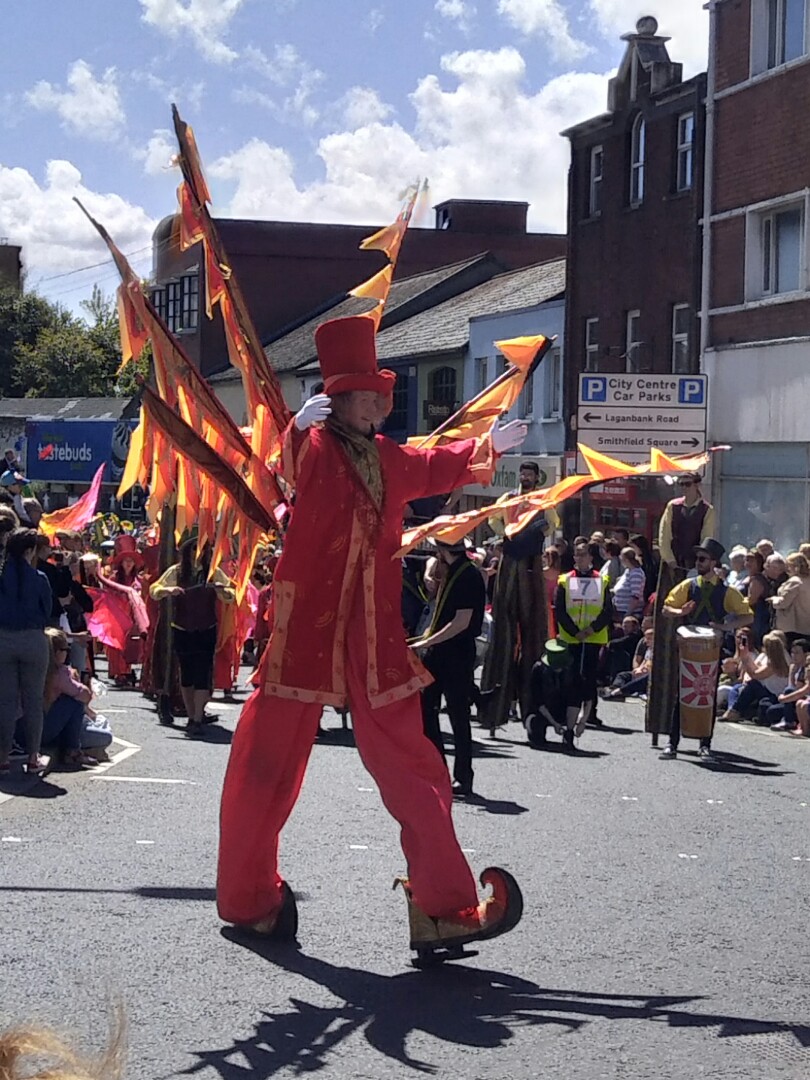 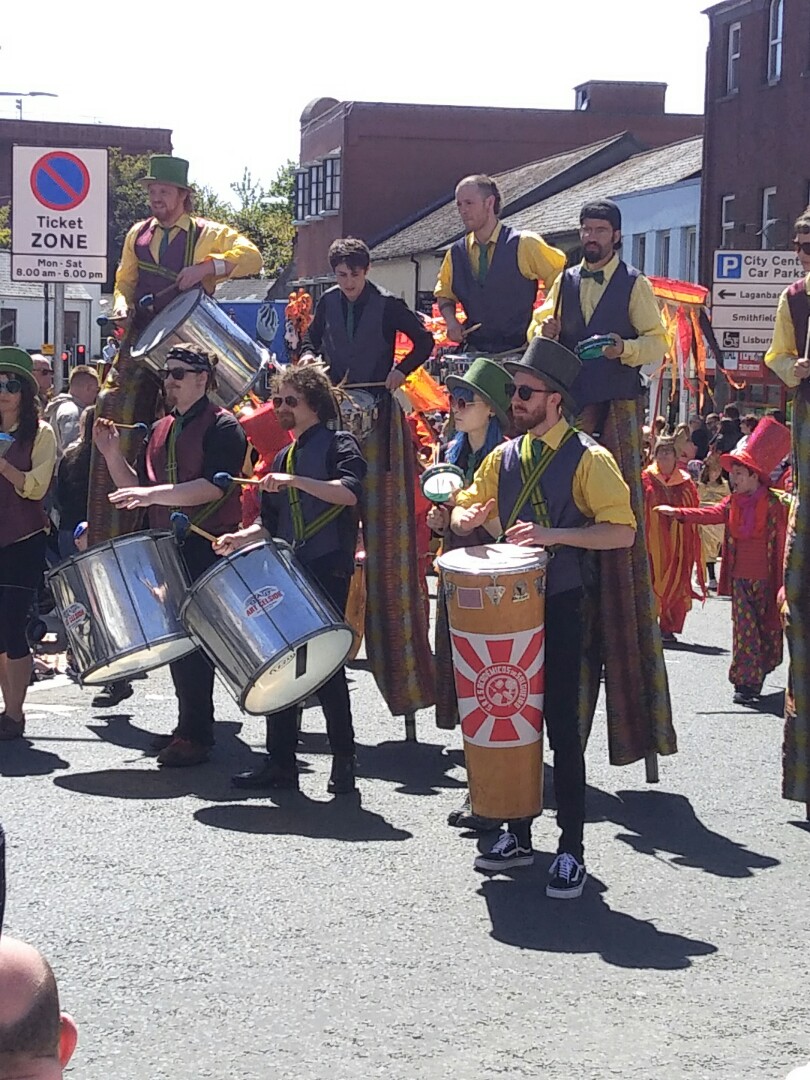 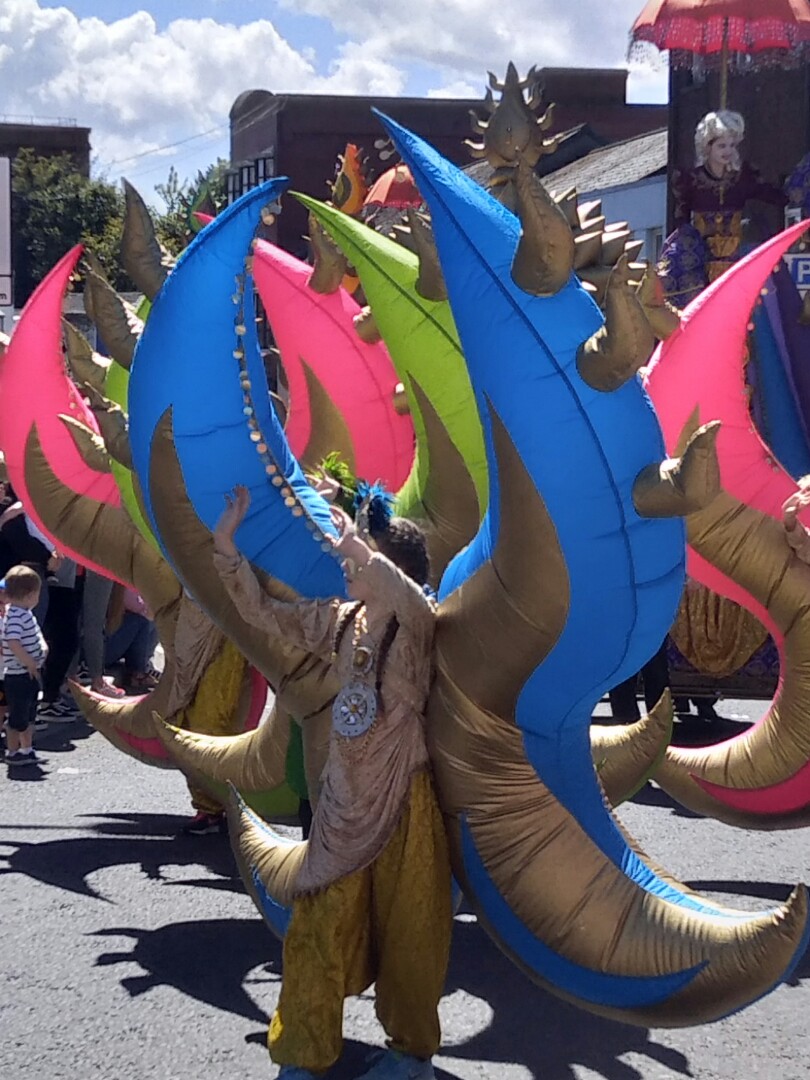 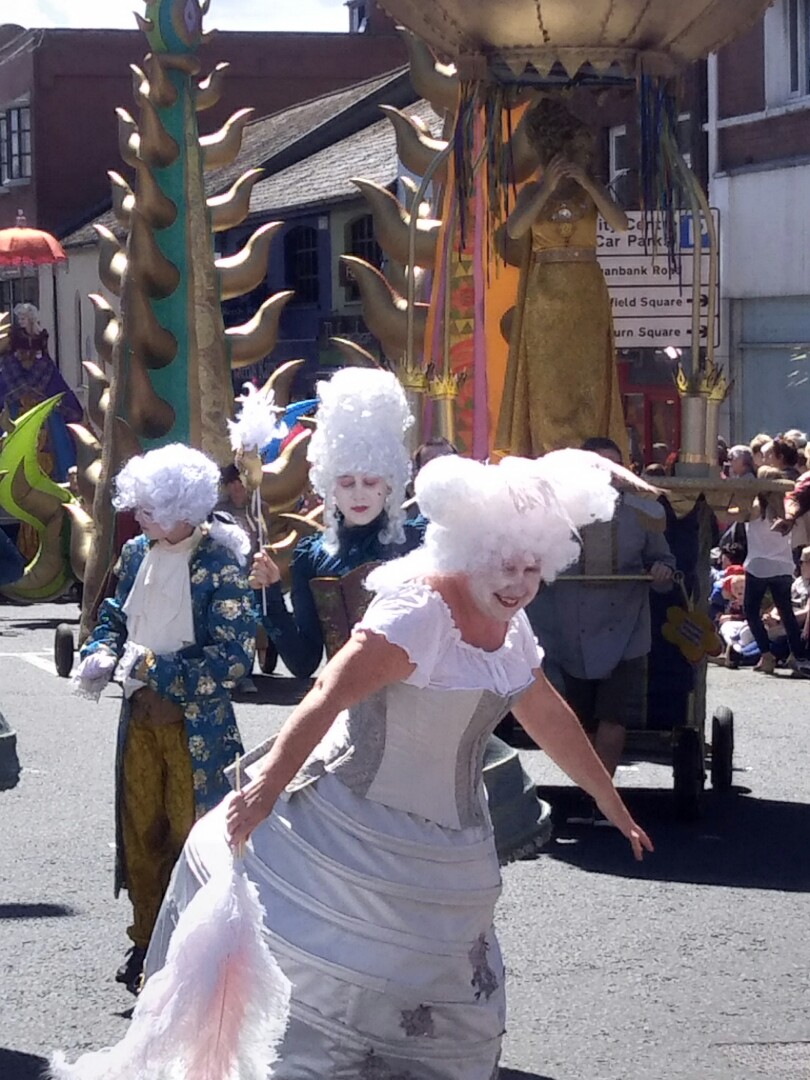 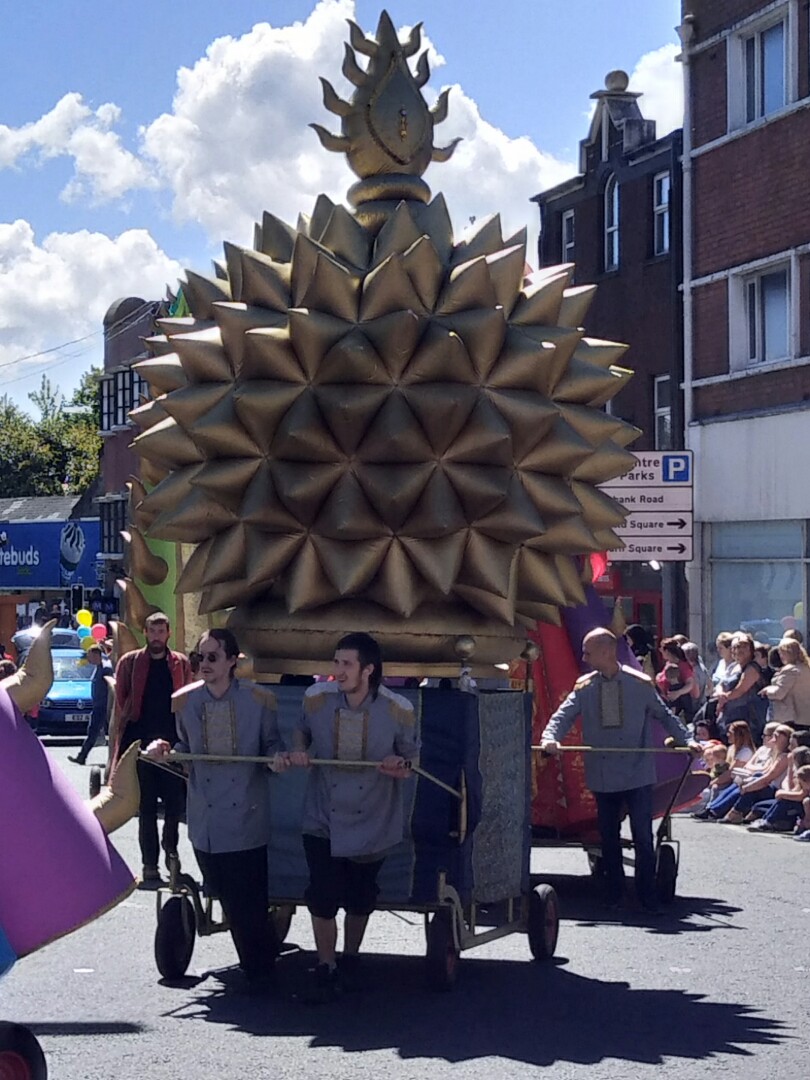 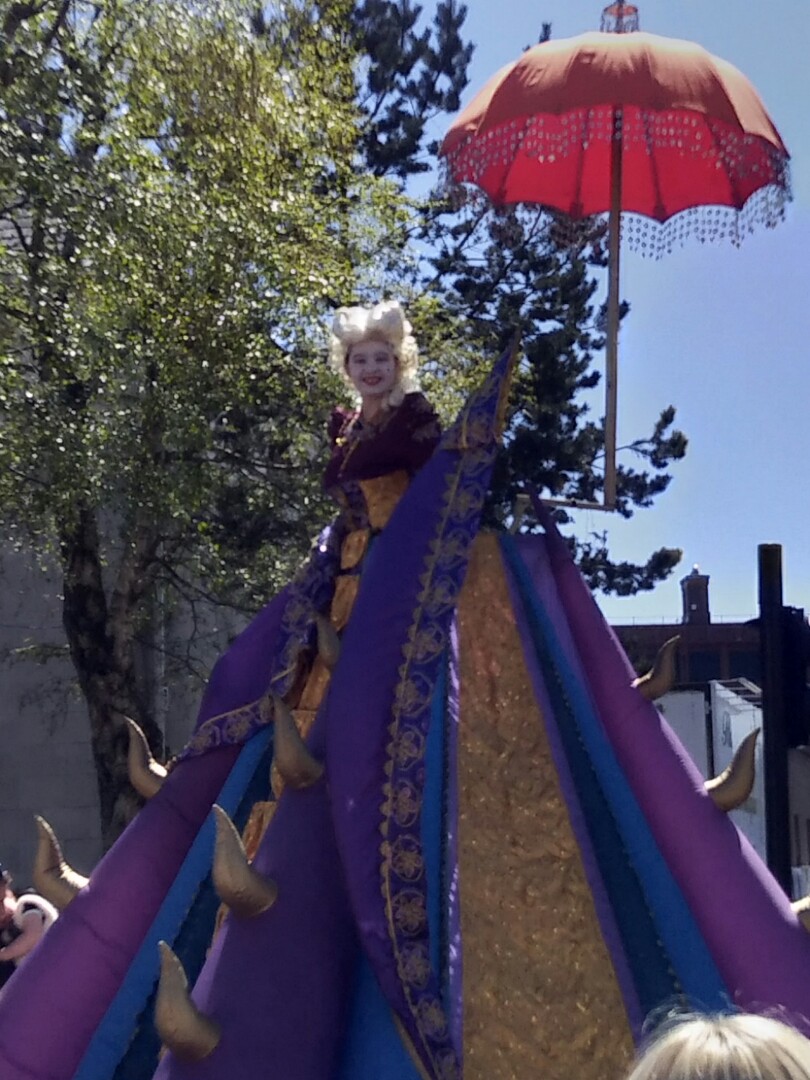 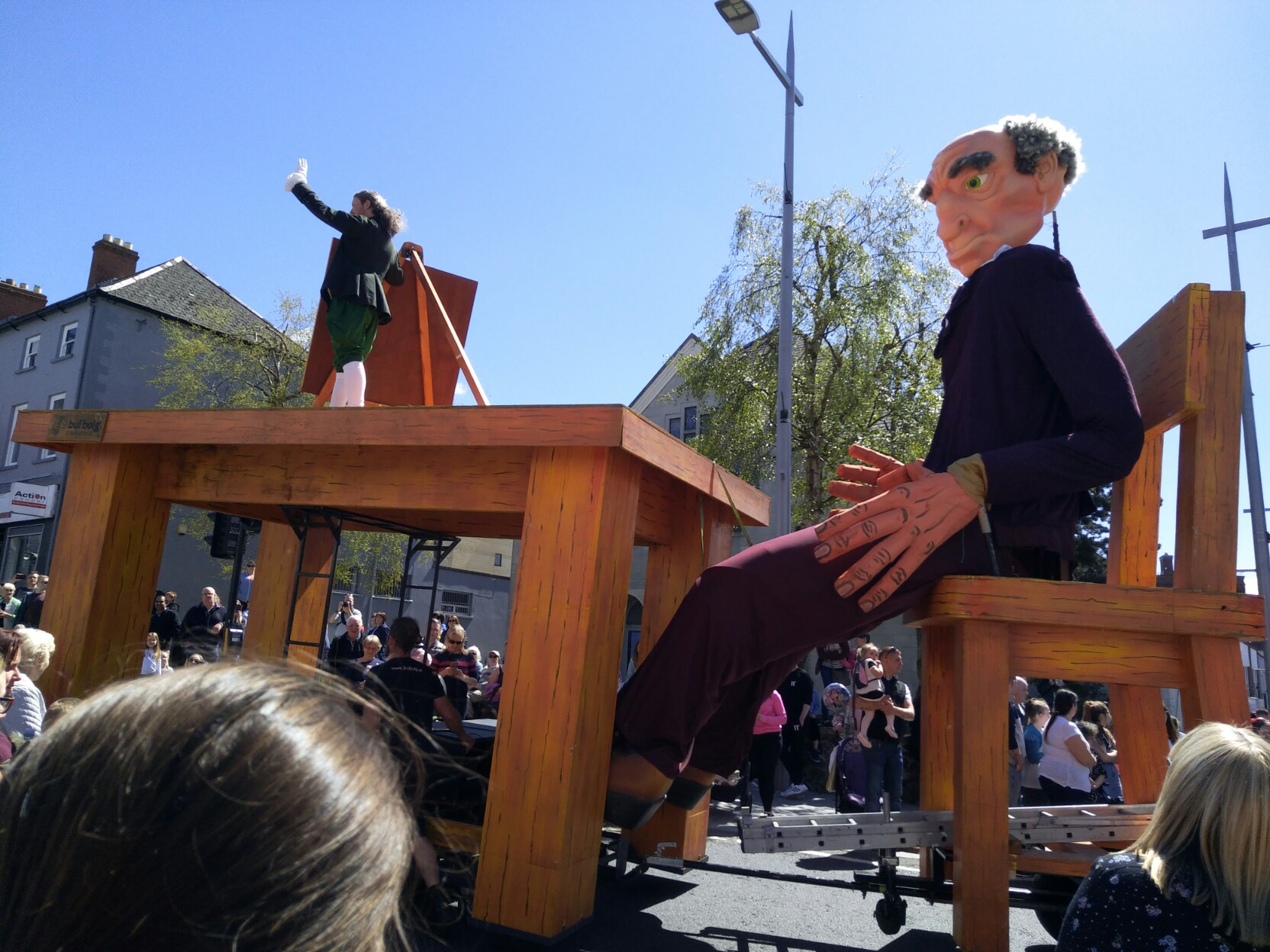 Sadly time is running out and the museum tour will have to be rushed. A shame. It was a fascinating insight into linen, its history and its production. One of the first exhibits was a piece of woven linen from Tutankhamun's tomb! We were just looking at flax and its fibres when one of the staff wandered in, sat at a wheel and started spinning. Naturally we got chatting. She's a weaver. I almost wish I hadn't have told her I was actually a weaver first. After hearing the work she did and the looms she had I almost felt as if I'd wandered up to Ronny O'Sullivan and announced that I'm a snooker player! Still we had a nice chat and when she asked me has I ever woven linen I told her no, but hoped I might find some yarn whilst in Ireland. She said she could remedy that!

The museum has 4 looms, two large Jacquard looms for weaving damask. A smaller simple draw-loom weaving some plain unbleached linen and a small dobby loom used for samples. There was also a Jacquard card punch and Deborah demonstrated the generation of the punch cards from a blown-up graphed representation of the final pattern, and then how the individual cards were laced to make the pattern train. Remember all this was invented 100 years before Hollerith claimed fame with punch cards for use in tabulators and later computers.

Deborah demonstrated the looms too but I pleaded for her to stop. It's a beautiful, dry, sunny day today. Linen is notoriously difficult to weave and needs moisture. Even with the humidifier in the room warp after warp kept breaking. Her few minutes of demo for us will cost her 10 times that in tying all the broken threads back in!

Then she delved around in a box and presented me with 2 spools of fairly coarse, undyed, genuine Irish linen yarn. I say fairly coarse but can still pretty much as fine as anything I've ever woven. We joked about whether I'd be thanking her when it was on the loom and snapping as often as weaving. Definitely a winter project, when there's moisture in the air. An atomiser of water to hand might not go amiss either.

Thank You Deborah I really do appreciate the gift, and yes I will send a photo of the finished product. Some huck lace placemats take my fancy. There was a no photo except on request policy in the museum. I doubt the looms would have come out well although Liz may have some pictures.

On round Lough Neagh to tonight's resting place - The Battery Bar at Battery Marina a few miles east of Cookstown. A huge car park and 2 other vans already parked up. The pub doesn't do food and it looks like the Chinese restaurant next door (the only other building) is permanently closed. The pub does, however, do an excellent pint of Guinness and there's no charge for parking overnight. Glorious view across the Lough only marred by today's sudden burst of warmth causing the heaviest fly population we ever encountered. Too big for midges but I wouldn't put it past the little blighters to be biters. Anyway we slathered on the repellant.

But how's this for a pint with a view? 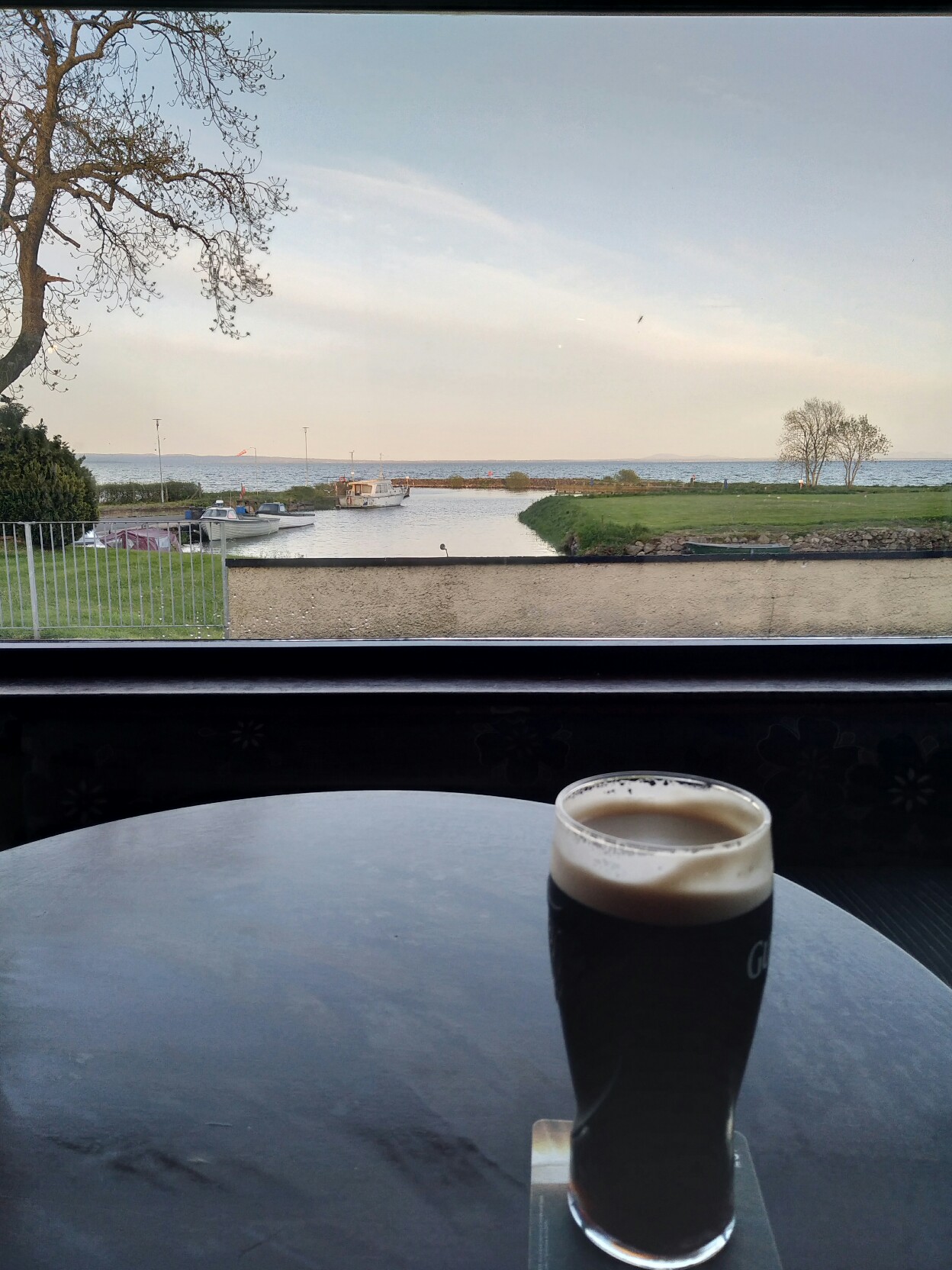 Is scary, really scary. We're having a quiet coffee in Cookstown this morning and Liz casually mentions "the birdcam seems to be down"!! Panic stations, panic stations! All those little Tintinhull

It's another wet and very windy day, it really doesn't help us explore Belfast but at least we've done the stuff we really wanted. First port of call is the weekend market, only