Orkney today! And a nice looking day too. Bright blue skies as we look up from our beds through the roof light. Bright blue skies that is, made out of focus by the ice that has formed on the roof light overnight. I thought it seemed cold.To start the day, a minor drama; I'm always paranoid about dropping the screw cap off the loo emptying tube down the chemical disposal point, so take great care, as I did this morning. What I didn't take such great care of was the screw cap off the bottle of loo fluid. Trying to tighten it back in the bottle it slipped from my grasp, bounced once and plopped in the recently cleaned and recharged loo holding tank. Now access is via a hole too small to insert a hand and just too deep to reach with pliers. Anyway the cap had unobligingly dropped rim downwards making plier grasping all that much more difficult. What was needed was a couple of long sticks to chopstick the cap and with delicate, surgeon like precision lift it out. Where are all the junior doctors when you need one? Eventually a combination of plastic serving spoon and handle end of a fish slice captured the recalcitrant little beggar. All the time during the operation great care had to be taken to ensure the uncapped loo fluid bottle remained upright, a spill would do the campsite's neat grass no good at all.Every day a different challenge!Before we head off to the ferry terminal a couple of local sites. Firstly Dunnet Head, the most northerly point on the UK mainland. A 3 mile walk or about 6 by road; time being pressing we took the second option. So we've seen the most northerly UK lighthouse (Muckle Flugga) and now the one at Dunnet Head, its mainland equivalent. Very peaceful standing watching the seabirds and we were rewarded with a sighting of a hen harrier on the drive back. 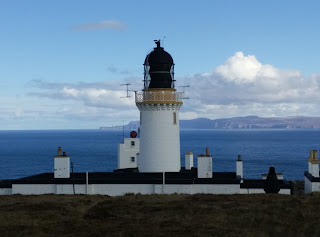 The only problem was, in our concentration on finding the Dunnet Head turning we drove straight past the Rose Rock gin distillery. After driving some way to John O'Groats we realised our error so decided to swap the visit with a visit to the Queen Mum's Castle Of Mey. Well would have done but discovered the Castle Of Mey doesn't open until May!Back then to the distillery, a tasting of two rather nice gins and a very distinctive vodka (lest anyone should be worried about drink driving, I hasten to add these were mere sips). The favourite of the two gins duly purchased (the stronger Naval Strength) we set off again. 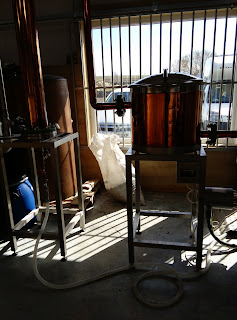 An aside, despite the van now holding  6 bottles of single malt, whilst we enjoy whisky we rarely drink it. A bottle generally lasts several months so our horde will last six times several months. Gin is about the only spirit I regularly drink with a G&T often/generally partaken as a pre-Sunday-dinner aperitif. This Naval Strength will be the "special occasions" gin.Sadly the meanderings meant no time to visit the intriguing  Commonwealth War graves for Scapa Flow with huge marble or granite memorials sticking up like giant dolly pegs. Another time perhaps.Nearly a plan B scenario. Despite dropping by the ferry office on the way past last night and apparently booking our crossing, there was no reference of it. I did hear the woman we spoke with remark to the next customer that she was having a bad day, apparently we became part of it. Fortunately the ferry wasn't full so our impromptu booking was accepted. The trip from Gills Bay (a couple of miles from JOG) to St Margaret's Hope is the shortest of the crossings, taking a mere 60 minutes. Scrabster to Stromness is two and a quarter hours and Aberdeen to Kirkwall is six hours with the return overnight journey even longer. The Gills Bay one is definitely easiest! Despite the sunny blue sky the wind was still forceful (and cold) and the sea was described as "Moderate". A little chop for 10 minutes as we crossed the open water but once in the lee of the islands it was like a millpond for the rest of the journey. Liz and I spent the entire journey above deck watching the wildlife. I won the " spot the first puffin" prize sighting 2 on the wing. Great Northern Divers were a new species for me too.An easy crossing and disembarkation and a gentle drive across the islands to Kirkwall where we are camped at the leisure centre campsite, our camping entitling us to a free swim in their nice looking pool. Now there's something to do on a rainy afternoon. Taking advantage of this rare break in the weather we just dumped the van and headed the 10 minute walk into town. All those ceramic poppies that adorned The Tower Of London are currently decorating one wall of St Magnus Cathedral. 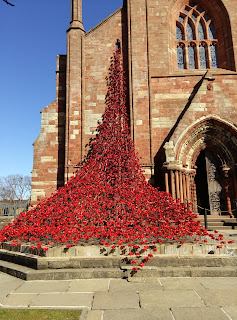 Nice to get a glimpse. Also nice to see a bar in town has live local Folk music on  a Thursday evening. Time to stop writing and get ready to go out again. 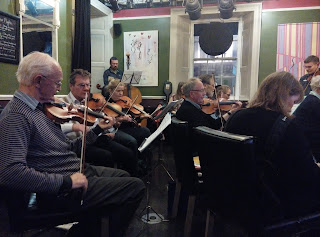 Slightly warmer overnight, only down as low as 2 degrees and the wind was blowing onto the side of the van without a vent, so no draft. What a huge difference those 2

A quick explore of the site. Not much has changed since the 60 staff worked here in the eighties, still the open round metal conduit terminated in metal light switches, the short with