There's no doubt that Britain shares many similarities with Europe but here's a few differences.

Let's get the negatives out of the way first

Drains - there is no doubt that the continent, including Germany suffers from drain odour more then we in the UK. Strange, because public toilets over here tend to be super clean, probably because there is always a charge. Wonder where the drain smell originates.

Smoking - there just seems to be more, particularly outside bars. Bars are supposed to be smoke-free but I've been told the policy isn't as rigid as the UK. Also there are still cigarette vending machines, although not many. E-cigarettes do not seen to have made it to here.

Now a few of positives:

Litter - there is none. The Pfand deposit system keeps cans and bottles off the streets and out of the hedgerows and maybe there are strict litter laws, but there is none. For example today a builder's van was stopped at some traffic lights, its passenger nipped out and deposited some wrappers in the bin on the pavement. Unlikely behaviour in the UK. Germans don't tend to drink beer from cans so look closely at pavements in Germany, the're awash with bottle caps and fag ends but no other discernable litter. That also includes canine faeces; apart from one isolated occurrence in Berlin that stood out because of its very existence.

Beer Supermarkets - Come on shops that sell just beer, lots of it, most of it by either the bottle or the crate have to be a good thing! We wandered in to one the other night. Several aisles of crates from various breweries, sorted alphabetically within beer styles. Taking just one or two bottles from a crate is permissible but real Germans buy by the crate. Round the sides of the supermarket are the extra speciality and foreign beers. It also has a great range of non-alcoholic drinks. We need these in the UK!

Cycling - it is not something that motorists hate because it clogs up the roads, nor something that pedestrians hate because bikes are seen as a threat. It is something that is genuinely seen as an alternative form of transport between walking and driving. Most European countries recognise this and provide the requisite infrastructure, generally in the form of dedicated cycle lanes both on the roads and the pavements. I'm not sure what the average German would make of a recent Mail Online forum about cyclists in London where they were considered 'scum' and that 'hanging should be brought back' for them. We really do have a long way to go in the UK before cycling reaches the sensible status that it enjoys here on the continent.

A corollary is that there are all kinds of bikes. Trailers carrying toddlers in a little tent are commonplace. We've seen bikes with a flat bed in front of the cyclist with a carrycot and infant sleeping is way across the city. The occasional recumbent or semi-recumbent and even these communal 7 way group cycles. 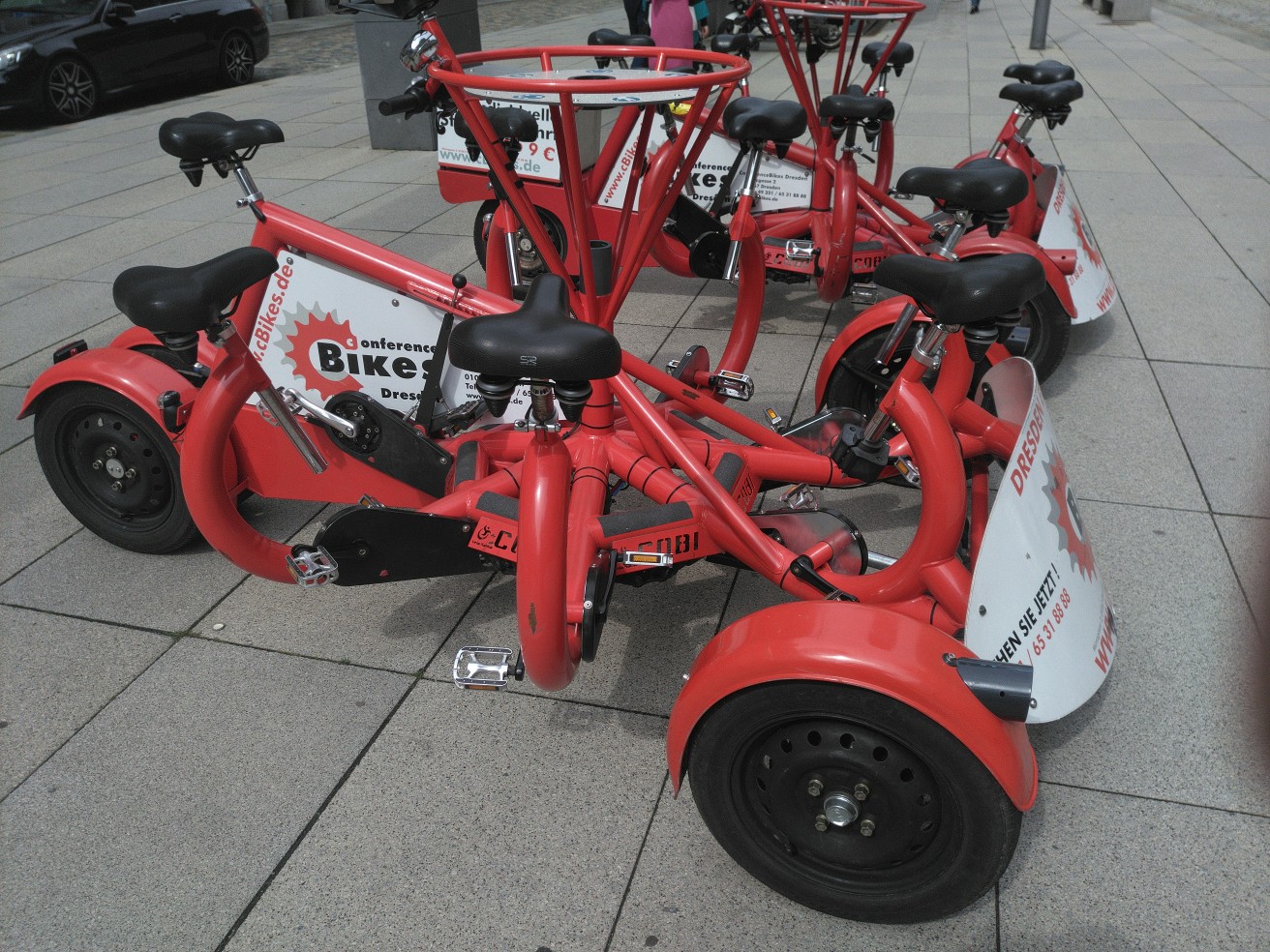 Despite all 7 facing and pedaling in different directions the drive mechanism transfers thier efforts to forward movement and one single person is responsible for steering. Looks fun!

Bakers - there seem to be a lot of them. Proper baked bread seems to be the norm. Cakes are good and similarly priced to the UK but finding a real baker in the UK is becoming more and more of a challenge.

And a couple of points that are just cultural differences.

Curtness  - the Germans maybe seen a little rude to us over-apologetic Brits. In Britain is you bump into someone you apologise but generally do so they, even though they have done nothing. Here in Germany, back into someone and you get a stare. Apologise and you get an even bigger stare. Shopkeepers vary between being helpful because you don't speak German to being curt to the point of rudeness. But like Glasgow really!

Backpacks and luggage - Backpacks are much more the norm here amongst shoppers. I thought it probably some side effect of cycling but, no, lots more people on the trams and buses with (often quite large) backpacks. Since Liz and I also carried them daily it made us feel much less like tourists. And what is it with wheeled suitcases along Berlin streets? They seemed everywhere, even in the suburbs.

And now the just weird:

Condoms - Rarer here in E Germany but in the West, Hanover and Berlin there were machines everywhere, including random places in small villages. And the machines didn't just sell your bog standard johnnie's but various technically enhanced french letters along with other aids to enhance your sex life, whether solo or with partner.

Ampelmänn - fancy making a cult figure out of the green and red pedestrian crossing icons. Apparently E Germany designed their own, separate to the figures used in the West and they have become an iconic symbol of the East, with stores selling Ampelmänn branded merchandise. An unlikely folk hero if I ever saw one 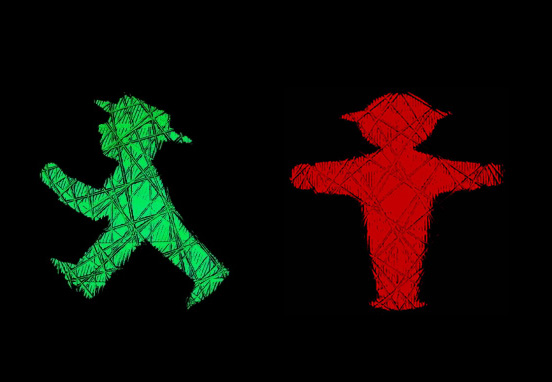 Well, that's it, I did say they were random thoughts.

Some random stuff today.  A good start in the fact that the rain stopped late last night and, despite the lakes around vans, most had drained today. Good job not too many vans

A  quick linguistic diversion on the 'esszet' character ß. It is used where there are 2 separate 's' sounds together, a long 'ess' and the shorter 'ze'. For English speakers it used to