Light drizzle to start the day. Not a good omen, but then again this site is on the banks of the Severn so a hot day may be full of insects. In fact the river is only about 20m from where we are pitched and provides a pleasant 20 min stroll into Stourport itself.

Of course there's always the housekeeping to do first. I need to empty the loo (should have done it yesterday, it's heavy now) and wash up whilst Liz decorates a cake. One theme for this 10th anniversary meet was to provide appropriately shaped or decorated cakes. Of course, our peregrinations have rendered making anything somewhat too much of a challenge but Liz had the brilliant idea of buying sprinkle on food colouring and making a paper template based on the Forum's logo. Whilst at my sister's we had access to a printer to print the logo and Liz scaled it to the appropriate size for a Morrison's decorate-it-yourself white iced sponge. The end result of the green logo on the cake was stunning, especially since it was all done in the confines of, and with the limited told and resources of the campervan. 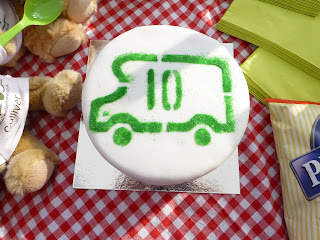 Just about to leave for downtown and Mike popped round with some Farecia G3 and Autoglym polish. For those as ignorant as me, Farecia G3 is a paste with a very fine grit embedded, the idea being too remove the few microns of my van's top coat that has the horrible brown streaks embedded in it and then restore those few microns with a resin polish. Result, several square inches of stripe-free high-gloss GRP and me armed with enough knowledge to do the rest at home. Result indeed!

It's now lunchtime do a meander into Stourport and a possible refreshing point at Wetherspoons. Well it might have been had Stourport Wetherspoons bit been one of the few that has recently been sold. Plenty of other pound but by the time we found Wetherspoons wasn't there any more we'd passed the 2 CAMRA recommended pubs, now on the otherside of town. Still a mooch round, a couple of DVDs and a CD and Liz bought a new pair of shoes in one of the better shoe shops we've seen.

What do we do are these rally/meet things? Not much really, just chill and socialise with friends. Bernard has brought along his home built barrel organ and treats us to a few tunes. It took 4 years of hard work to build, from scratch and is an impressive feat of engineering so, so far beyond my own skillset.

A chance conversation with Colin and Janet this afternoon may have found out next van. It we do Deeside we need something marginally larger the Romahome R30 might just fit the bill. It's only 6" longer but significantly wider and a totally different use of available space. Not that we are looking but ...

The evening is taken up with an American supper, shed loads of food, far too many cakes although I'm sure Graham would say you can never have too much cake. Good conversation, Jayjay brings an amplifier and does a really excellent solo set, trying to entice a couple of us ukuleleists to join in but I've only the electric uke and I can use the excuse that it is too much hassle to mask the real reason, my musical inability. I missed the fact that Glen had rigged up a large screen in his awning to allow watching of the England football. After the match had finished it was dark enough for him to set up a mouth trap - basically a white sheet suspended tautly from a tree and illuminated by a powerful UV strip light. We shall see what he catches in the morning.

It's raining heavily this morning. Liz's foot was very painful walking back from town yesterday. Looks like we are staying in the van today! Most people are off today anyway. About 30 or

Once again we return to England. Wales had been interesting for, amongst other things, its language. Welsh was heard on several occasions over the last couple of days and, of course, all the