Before it freezes!!Let's get this over with now. There will be a recurrent theme in today's entry featuring the cold. It is cold, the wind is very cold, it is unpleasantly cold. And before you think this is some neish southerner whinging about the Scottish weather, bear in mind this neish southerner has visited Shetland, The Falkland Islands and Svalbard, so does actually know a thing or two about cold winds. Did I mention it is cold here?The cold start to the morning was exacerbated by the fact we'd parked the van so the side with the fridge vent faced to the north. This meant the bitter north wind, along with the rain it was driving was forcing its way into the van through the vent and the draught inside the van was only a point or two lower on the Beaufort Scale. Easily fixed, thinks I, pop out, uncouple the electrics, take off the insulating windscreen cover so I can see to run the van off the pitch, turn it round , and drive it back on in the other direction. Easy indeed until the driving wind turns into a snow blizzard which lasts exactly the amount of time I need to complete the task and then abates the instant I return wet and cold back to the van. Grrr!!!!.Now sensible people, noting a strong, biting wind might decide against a  bracing cliff top walk. Nobody's ever accused Liz and I of being sensible. Multiple layers, new raincoats, waterproof over-trousers, an unfounded sense of optimism were all donned and off we set for Dunnottar castle 3 miles along the coast, once the next snow flurry had stopped, of course.The first part of the walk took us through Stonehaven town itself. Many people have the clichéd view of dour Scots, probably modeled on Private Walker in Dad's Army. Well I  can reveal a little know secret, Walker's relatives all live in Stonehaven and have jobs as shop assistants!The walk then leaves Stonehaven and climbs steeply for the 2 mile walk along the exposed cliff top. The wind may be cold but it's only moderately strong. We know this because the lady in the town's Tourist Information informs us she has checked, the castle is open today. In really high winds it closes as it is too dangerous.Actually with appropriate clothing the walk is bracing but not too cold and the waterproofs and jacket with hood protect well against the nasty snow squalls. Now I mentioned stereotypes. Scots may be seen as dour, but Geordies are probably seen as the opposite. And so it is no surprise that half way round the walk on a bracing cliff edge, that the Newcastle chappy I nodded "Hello" to on the way to the toilet block earlier this morning, should stop and engage us in conversation for a good 15 minutes. So typically British, two couples standing in a bitter howling gale atop an isolated cliff, swapping notes about campsites. 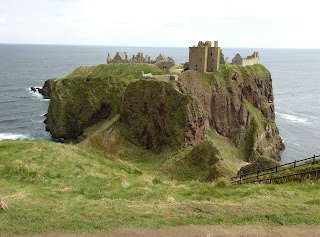 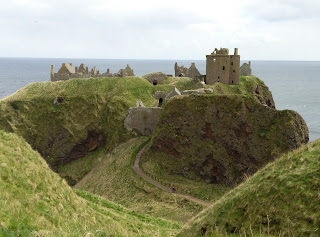 Anyway we didn't pay the entrance money to the castle but carried on round and back through a delightful woodland dell, making a 6.6 mile walk in total. Although given the amount of climb, fighting against the wind and snow it felt nearer 10. A reward was in order so dinner at the Marine Hotel. OK, so we were always going to go here, it's the brewery tap for the 6°North brewery which is the only Scottish brewery specialising in Belgian beers (it's name coming from Stonehaven being 6 degrees north of Brussels). The beer was excellent as the food. Definitely restaurant not pub, in style, quality and prices but really good.Remember the title of this entry. Walking back asking the prom in the ever more biting wind we spotted a sign for award winning ice creams. Got to be done and no danger of melting if we didn't eat quickly.Back to the van early tonight. Too cold to do much else. Not sure about tomorrow's plans. The lady in the tourist information suggested our plan to stop at a campsite high in the Cairngorm's might be interesting, indeed we might have an interesting drive just trying to get there!Did I mention it was coooold?

Plan was to go up to Aberdeen today but we've had more than enough retail therapy so decided to give the granite city a miss and head inland to the Cairngorm National Park.

Two Drifters
—
Saturday, hurry up and eat your ice cream
Share this