Firstly to confirm David's suspicion, glamping is, indeed, a portmanteau of 'glamourous camping'. The idea is to provide luxury pods (i.e. huts) in lieu of tent, with all the mod cons including heating. Not real camping of course, but if it persuades 21st century families, particularly their children, to get closer to nature then it's OK with me. Providing the extra profit that must be attached to providing glamping pods doesn't mean an increase of pods so reducing campsite space for tourers like myself or conventional tent campers. Anyway, here the pods are referred to as "Hobbit Huts" for obvious reason

Talking of camping, Scotland doesn’t just tolerate wild camping (i.e. camping on unused ground) it seems to actively condone it. Alongside the river at the Bridge Of Orchy a length of bank had been set aside for campers. A hundred metres further along there was a sign by the landowner stating that this was the end of the camping zone and that the next one was 3 miles upstream. Nice to see and it was good to see that the site was respected by campers, there was no mess or rubbish. Of course we could find quiet car parks and park up in without fear of being moved on but most of our driving has been on mainish roads where any parking would be exposed and noisy. We really need to wander off the beaten track down little side roads to take advantage of free overnighting. A lot more internet research might be needed to find the best places.

Tyndrum is right on the West Highland Way and so the tiny village is full of walkers. The few guest houses all advertise drying rooms, not laundrettes but somewhere to dry sodden walking gear. The campsite here is dotted with small backpacker tents. We hadn’t realised that several companies offer a baggage carrier service where you can get your bag collected and delivered on ahead to your next resting place whilst you slog along on shanks’ pony. Obviously a great idea to save having to lug full kit up these mountains.

Tyndrum is small, 2 shops, a pub, a restaurant, tourist info, 2 campsites and a few guest houses. One of the shops though is the famous Green Welly Stores, a petrol station, cafe, tourist shop, serious whisky shop (with several bottles priced well in excess of 2 grand) and an outdoor wear shop. Probably got other bits too, that we never discovered. Liz bought another Jack Wolfskin handbag in the outdoor shop. She likes her existing one so much that one in another colour makes sense. Me, just a couple of unusual beers from the whisky shop and a brake light bulb to replace the spare that was itself used to replace a blown bulb whilst we were in Scourie. Oh, and we did find one of our long term questing-beasts – plastic wine goblets where the stem unscrews from the glass part and fits inside, making the glasses very compact when travelling. In fact the glass part is flat based so without the stem it will double as a small tumbler. Not seen this particular Dutch product before and it is exactly what we’ve been looking for.

We walked up to the store and then took a walk around The Bridge Of Orchy but it was obvious that resting Liz’s foot would be a good strategy. So elected for a 70 mile drive around the Trossachs. You might think Scotland just has mountains but the North West Geopark is much more dramatic and rugged then even the Cairngorms which host the taller peaks such as Ben Nevis. By comparison the Trossachs are more rounded and greener but no lessgrandiose and some of the peaks are still snow covered. The drive took in Lochan Bhe and Lochs Awe, Fyne, Resti, Long, and Lomond. It was beautiful country, the road along Glen Aray is as picturesque as any in the UK and a  visit to Loch Lomond will make it obvious why the banks are considered to be ‘bonny, bonny’.

Half way round the drive we stopped at the small town of Inveraray famed for its castle and jailhouse, both visitor attractions which we didn’t bother visiting! However a lesser known claim to fame is that it is the birthplace of Neil Munro. Who, I hear some of you say (no, not you, of course, David). How about if I give you his pen-name - Hugh Foulis. No? A picture clue (starter for 10, no conferring)

No, you don’t recognise the Clyde puffer, The Vital Spark. Ah, in that case you are too young to have caught either series of Para Handy on the TV. Wonderful gently Scottish humour.

Inveraray is both prone to me making typing mistakes and on the end of Loch Fyne. A few miles further along the loch is the Loch Fyne Brewery which just so happens to have a Brewery Tap bar – too good to pass by. Normally I don’t partake in drink driving, but one slow pint of not too strong beer on country roads and I ought be OK; mindful as ever of Scotland’s lower blood alcohol level legislation. Being mindful was good too as about 15 miles further on we passed the only speed trap we’ve seen this holiday. Fortunately I was following a couple of cars and the police weren’t too concealed so we braked in plenty of time and crept past at 25mph. Back to the brewery (always a good idea). 6 handpumps and a further 3 craft beer pumps gave a good range and the beer was good enough to add another couple of bottles to this morning’s haul. We now have a temporary problem in that the van’s very limited allotted beer storage space has been exceeded. Still it tends not to last too long! Anyway here’s a self indulgent pic

One good thing about staying on a long distance walking route is that the restaurants cater for folk that need refuelling  on a budget. My advice is, if you ever stop at the Good Food Restaurant in Tyndrum then a regular fish and chips is adequate and a large somewhat excessive.

Before  trundling off to bed here’s today’s top two frustrations. The onsite internet has got painfully slow tonight. I suspect it is overloaded with folks streaming, probably The Eurovision Song Contest. It is so bad that simple web pages fail to load and I was totally unable to produce the blog post directly online as I have down the past couple of nights. Still the plus side was that it forced me to hunt, again, for a Windows offline blogging tool. The favourite recommendation has always been Windows Live Writer but this was recently abandoned by Microsoft. Previous hunts for a suitable tool have failed to offer any decent free alternatives. However tonight I discovered Live Writer has been open sourced and is now available. That is what tonight’s blog is written on – the download was small and I managed to get a window on the ,internet long enough but it then took a long time to configure but a quick test seems to suggest all is OK. If you are reading this then that is the proof

The other frustration – the weather. It has been a pleasant sunny day today but last night it was back very cold indeed and overnight temperatures dropped to just 2 deg. That is cold in the van and the hot weather a few days ago meant we swapped out our warm flannelette sheets liners with cool, crisp cotton ones. Mistake, a clout cast prematurely! In the early hours Liz was scrabbling to find a pair of socks for in bed and neither of us slept as deeply as we might. Flannelette and extra covers tonight! 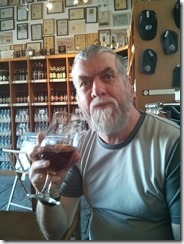 Gentle reader, it is likely that I shall be off-grid for a couple of days, depending on how/when we find internet on Mull. Our proposed campsite is very remote and unlikely to

Heading south now. Aim is to get to Oban in the next couple of days and head on over to Mull. The first part of today's journey travels the 23 mile length of