Time for moving on. We've enjoyed this site. They've done the little things to make the visitor experience better. Like providing baby changing places and sinks in each toilet, but with a light and electric mobile above to keep baby occupied. Or the low level sink in the dishwashing room so children can help. Or the two pedal cars, the fussball table, the table tennis table, outdoor seating etc. What impressed Liz most was the face that the showers were actually designed so that the changing area was upslope of the shower so shoes didn't get wet (this is the first site without such an obvious design). Me, it was the good range of beer and wine at pretty much supermarket prices!

Now if you look at the route you'll realise we haven't just driven directly to Strasbourg today but took a tour through the Black Forest. 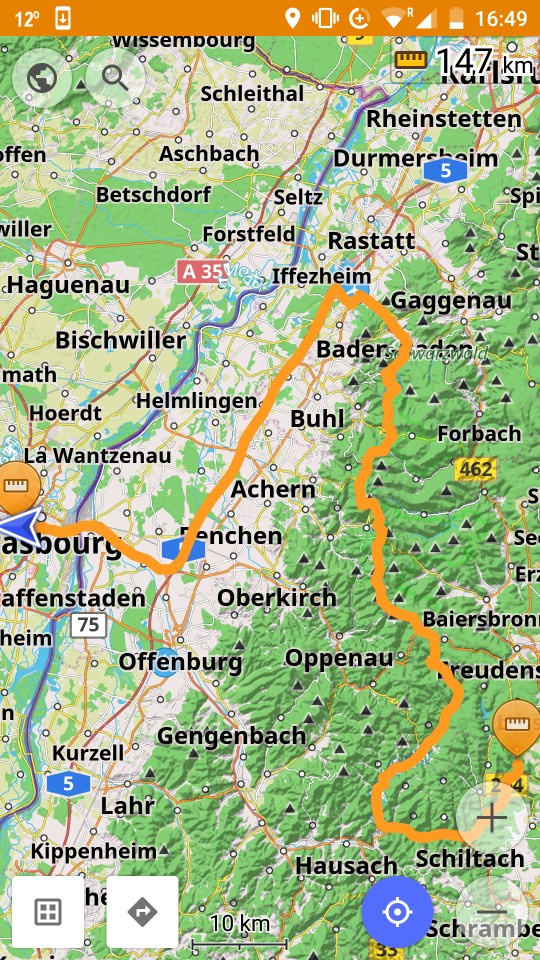 The route took us back through Alpirsbach where there was a flea market in place. The town was the busiest we've seen all week. By the time we'd really realised what was going on we'd gone too far to park conveniently. Shame.

We crossed and recrossed the small Kinsig river through pretty villages. In one it was church time and a we spotted a few people in traditional dress, including what appeared to be one of the traditional Schwarzwald hats with a cluster of pom-poms on. I thought they only existed in tourist shops.

The forest is primarily pine but there are small patches of deciduous trees, now in various shades of green through red, making Liz exclaim "wow" as each new vista came in site. It's a pretty ride and surprisingly few coaches but, as expected, motorcycles everywhere taking advantage of the open roads and knee-scraping bends. Mostly it's windy but flowing, the odd second gear hairpin breaking the rhythm. Being Sunday there are no lorries so for nearly all of the way we are traveling at our own speed.

Somewhere near Bad Rippoldsau the road starts to climb. Breathtaking views open up to both sides - to the east a never ending forest of pine, to the west the pine drops away after a few miles down onto the lush verdant Rhine valley and towns in France beyond. We're 1000m up now, on the top of the plateau. We stop at a small layby to admire the view and a young couple are flying a drone out over the expanse of pines getting a unique aerial perspective.

A few miles further on and the parking congestion tells us we've arrived at Mummelsee Lake, 1036m above the sea and full of legends of water sprites. We drive into a parking area and not a hope. We gave up and drove on but 200m down the double parked road there was a couple of parking spaces - enough for me to swing in without reverse parking. 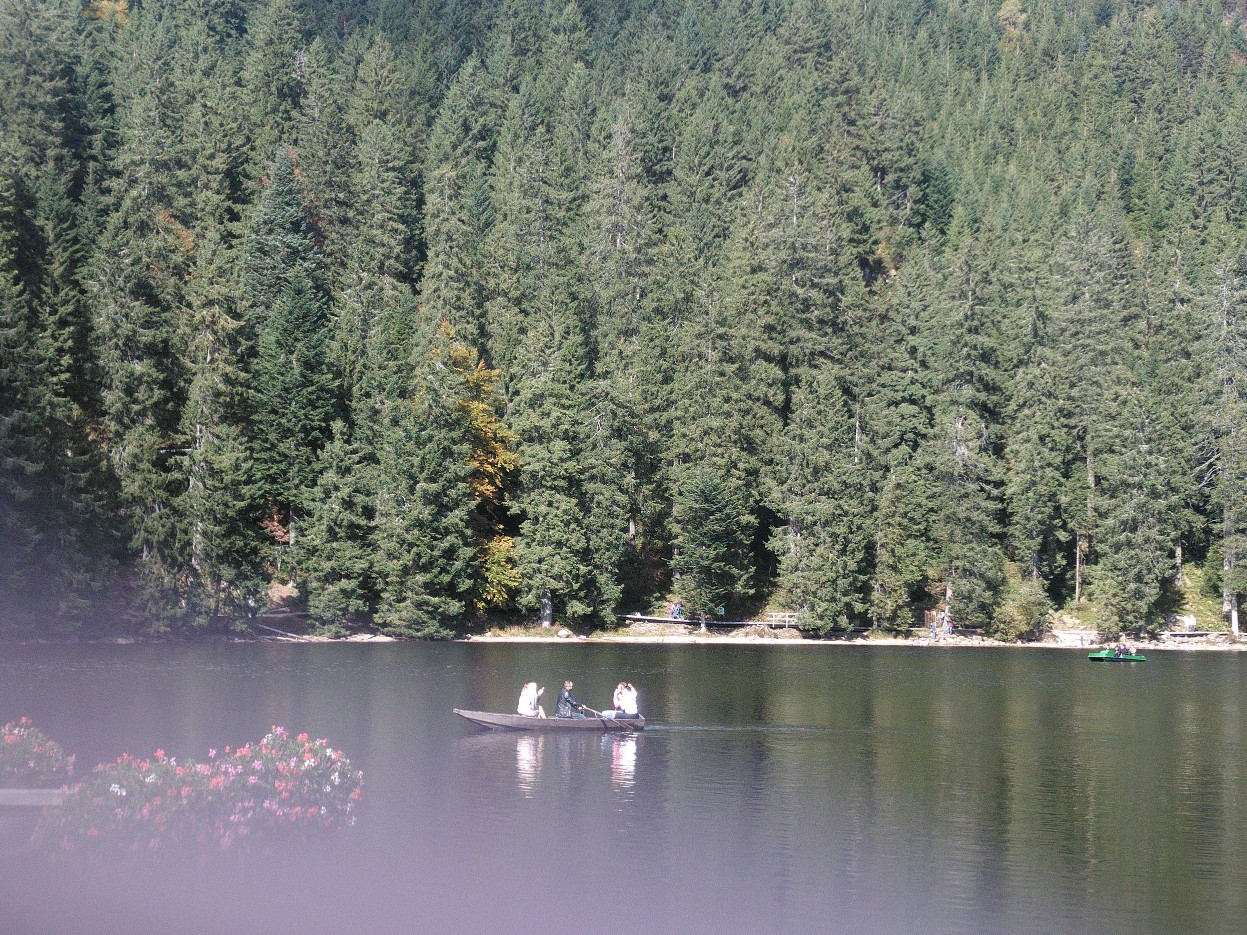 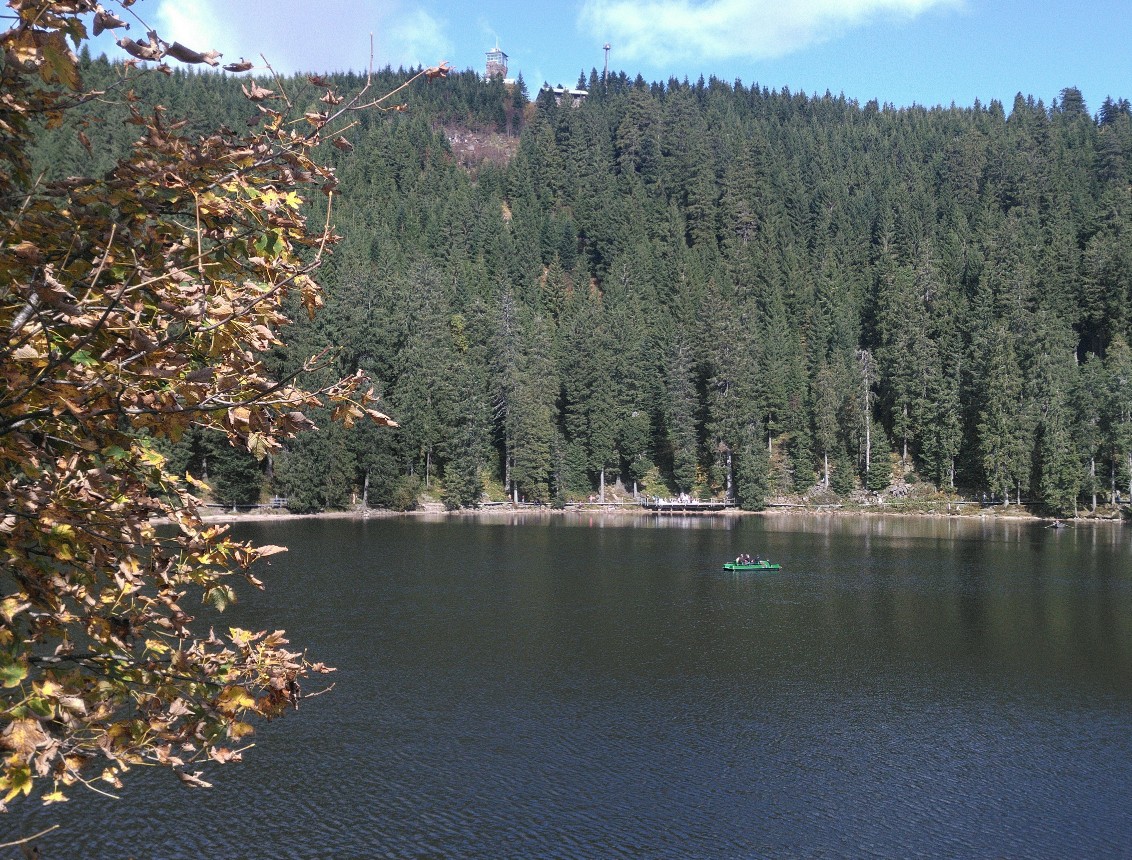 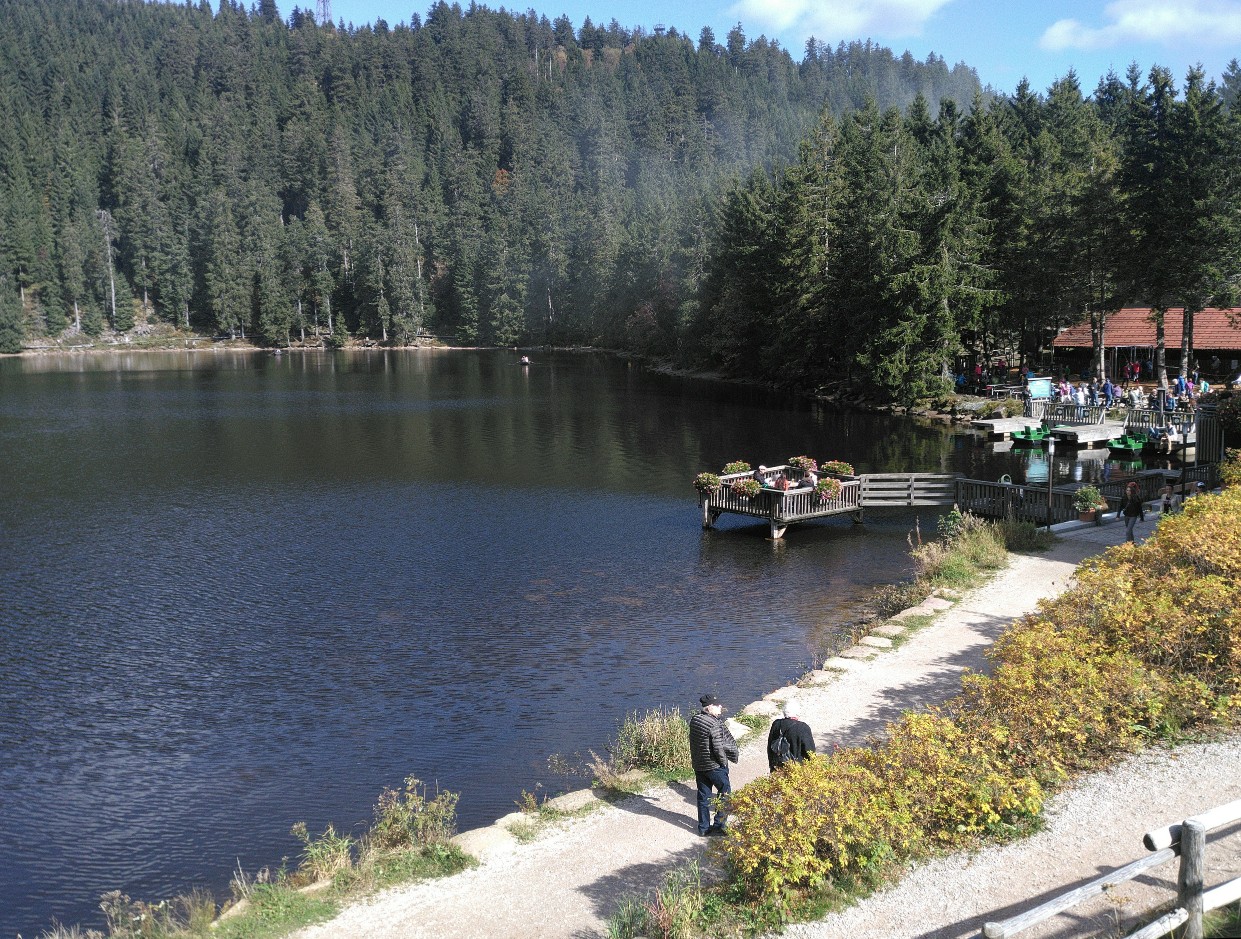 The lake is popular with both Germans and tourists, and so, of course there's an hotel with restaurant and gift shop. The gift shop is better than most. The hotel makes its own bread in wood-fired ovens at the side of the carpark and it looks excellent so we go for a loaf of kartoffeln brot. But, in a real Shirley Valentine moment (I'd like to drink a glass of wine in the country where the grape is grown) we order a couple of slices of Swartzwälder kirschtorte (Black Forest gateau) and our first paper plate all holiday 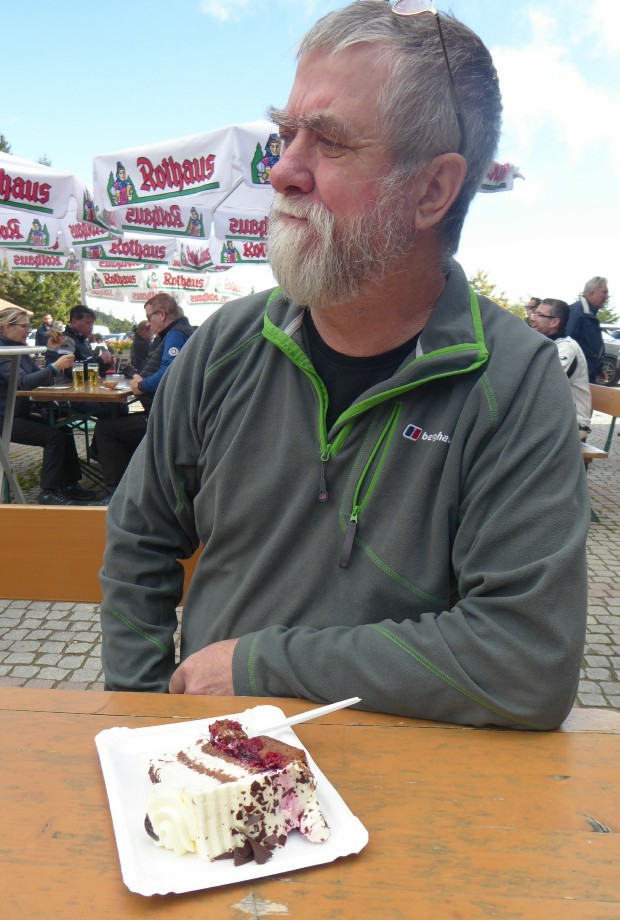 Not exactly sure what my quizzical expression was about!

It's all downhill from there literally. We'd hoped to see the centre of Baden Baden but somehow couldn't avoid the tunnel that bypassed it and so simply set Satnav to take us to the campsite here in Strasbourg.

And just as we are about to cross the Rhine from Kehl in Germany into France and Strasbourg itself we first cross another river, our old friend the Kinsig, now much wider and more stately than its former babbling mountain self.

Note the campsite is in Strasbourg, not on the outskirts. The Satnav took us almost into the historic city centre before veering off. We're an easy tram ride, or about 25 minute walk from town. Mind you, we had a scare, as we pulled into the campsite Liz spotted the "Full" sign. Fortunately we got here mid-afternoon, probably a couple of hours after our arrival the site looks as if it has filled completely. There's a national holiday in Germany in Tuesday, perhaps that's why.

And one more Shirley Valentine moment, the campsite shop supplied an excellent, if somewhat expensive, bottle of Alsace Riesling to accompany Liz's excellent pork stew tonight. And that potato bread we bought earlier was pretty good too, even if it was baked in a completely different country.

Plans for this trip after Munich and the Black Forest have always been a bit fluid. I thought that was mainly because we have already visited so many places in Northern France that

Almost a repeat of yesterday. A flyer in the kitchen here in the campsite suggests there is an arts and craft market in Freudenstadt town square today and tomorrow. Had we know we'd