Ireland's cheap bus service extends to here in Galway, just €2.30 for the bus that meanders round and on in to town. And, less usually for Ireland, the bus was almost on time.

It's a beautiful Saturday morning and Galway is heaving. It's a big city with both a modern shopping area and the maze of twisty passages, all filled with tourists alike, that betrays its ancient heritage.

First port of call is the Saturday street market. Or will be when we can find it. Even Liz's normally immaculate sense of navigation is challenged here, not helped by the busyness of the narrow streets. Still some interesting detours including a huge book shop that seemed to intermingle new, discounted, and second-hand books freely. It really was huge and some titles definitely eclectic. We could have spent much of the day in this one shop alone. I still couldn't find the Shaw-Smith Irish Crafts book I was looking for and the only copies of Shamus Heaney's Beowulf were new at €12. Liz, however, did find a fascinating book on sewn dolls.

We slip into the adjacent church but fail to find the required solace. It's noisy with coffee and chat following a mid-morning concert. Apparently this weekend is Galway's Early Music Festival. These two busker's playing mediaeval tunes were part of the proceedings 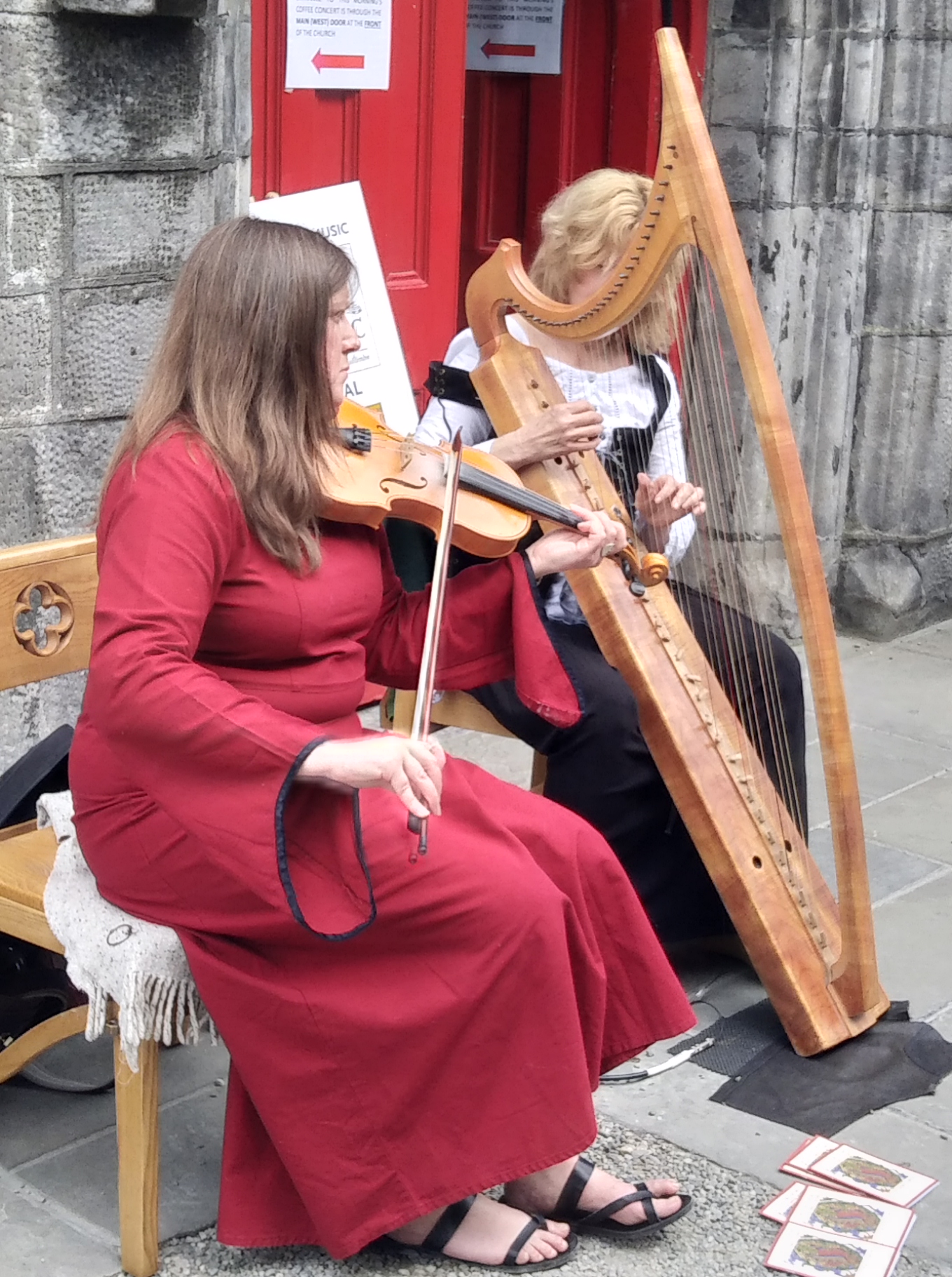 A nearby flyer suggests a couple more things we might like today: an exhibition of instruments by their makers at the museum and a talk on the Great Horns Of Ireland. Didn't visit any other parts of the museum apart from the exhibition which was interesting. A Russian chap making hurdy-gurdies and symphonias, a fiddle maker, a bouzouki maker who also had a lovely concert uke and a harp maker who was showing, amongst others, a replica of The Harp Of Ireland - we missed the original when in Dublin. Not true we visited the coffee shop - busy and consequently excruciatingly slow service but the lunchtime food was very good indeed.

Now do we really want a talk on The Great Horns Of Ireland? Anyone who knows us will know the answer. To be fair, it was fascinating and the speaker/musician an incredibly talented player of these, essentially single note instruments (although to listen to him play you wouldn't realise this limitation).

The earliest horns were just that, replicas of cows horns cast in brass about 600 b.c.e. They either were blown from the end (like a trumpet) or the side (like a flute). That single note (G above middle C in one case) could be considered a carrier and careful embrouchure could modulate that to give a small but useful dynamic range. Add to that rhythm, unbroken via circular breathing and some surprisingly complex 'tunes' were achievable.

As the bronze age gave way to iron the ability to roll metal into thin sheets was developed and so more complex trumpets could be formed. A trumpet, in this case, being a horn preceded by a cylindrical section. Lengthening the cylinder gave the horn more visual and audio power and curling them made the horns manageable - thus:

The talk was coupled with the Irish legends of Queen Mab (or Meav if you prefer) and described the horns being used as battle instruments. Certainly in our enclosed space one was intimidating enough, several accompanied with smaller horns and bodhràns could easily strike fear into the enemy.

Not great pictures but ... 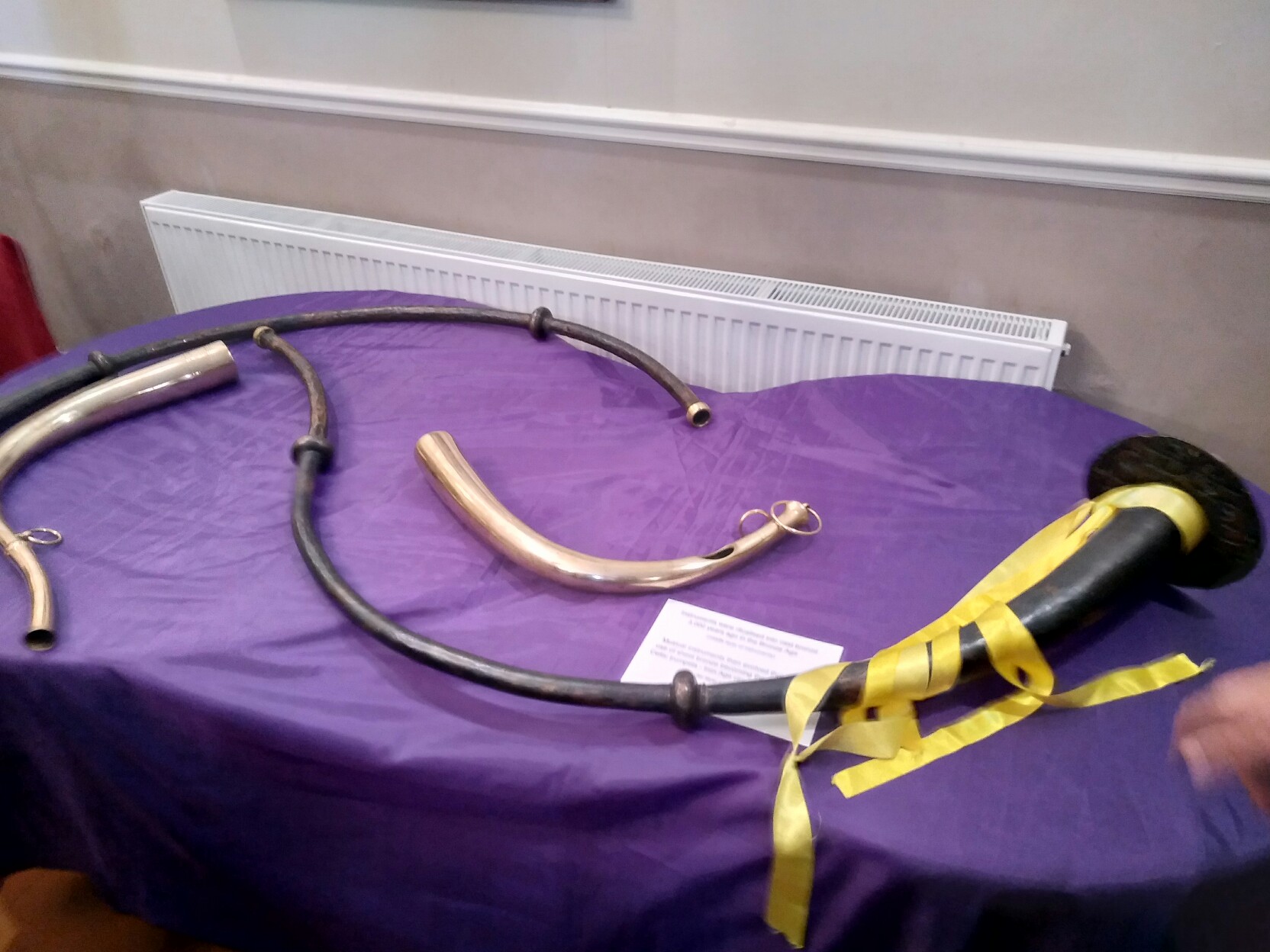 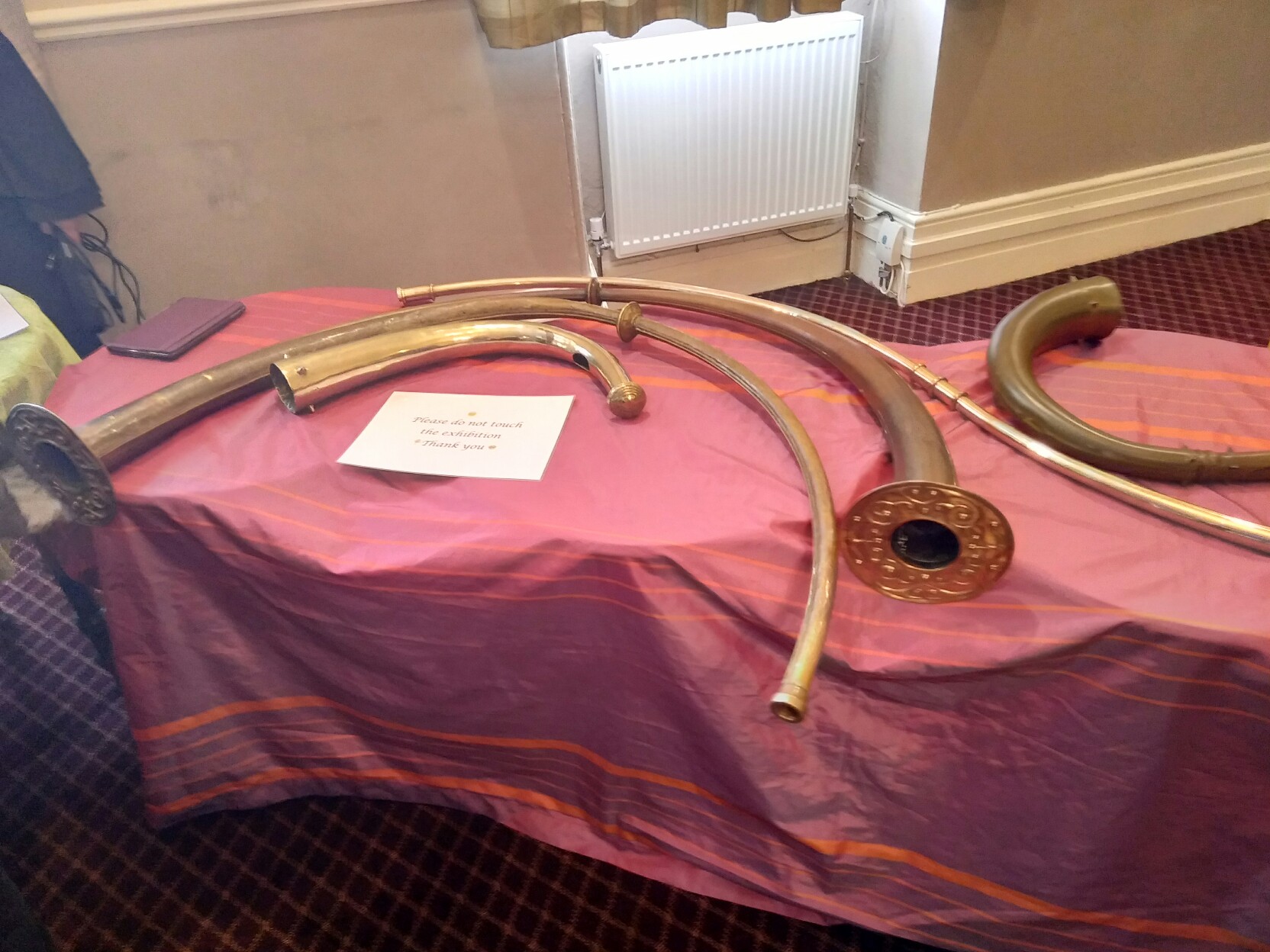 Now, a funny thing happen to me on the way to the forum/ shopping centre. We were walking around the larger shops, looking in jewellers for a ring for Liz when a young lady approached me and very politely enquired whether I'd be kind enough to participate in their hen party challenges - one of which was to find a man wearing socks with sandals.

At some wedding reception later this weekend there will be a photo of yours truly hoisting up his trouser leg where the star of the day will be pointing to the sartorial footwear whilst possibly being slightly embarrassed by the inflatable man crooked in her other arm.

Back to Sandhills to watch the football. No comment.

You never know who you'll be camped next to. Who'd have thought that right next to us there would be the UK's finest Michael Bublé tribute But then again, who the heck is

A lovely night's sleep at Bunmore Bay. Shame the smokery had external lights but I suspect there wasn't quite enough clear sky to see the milky way. To pay for the hospitality we