Having toured the north mainland yesterday, it was the turn of the south. For those unfamiliar with Orkney, the main island, appropriately called Mainland, is linked by a causeway road to 4 other islands: South Ronaldsay, Burray, Glimps Holm and Lamb Holm. The latter 2 being very tiny specks of land. Part of the linking road is a WWii blockade to stop German submarines cutting through the islands to Scapa Flow. We shall return to this later. 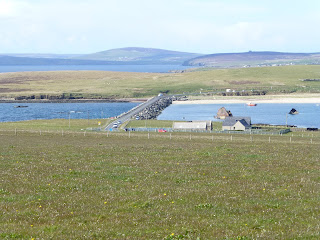 So, first order of the day is a direct run as far south as we can get, the southern tip of S Ronaldsay. The major tourist attraction here is a really well preserved cairn which was discovered to contain several eagle claws and talons; using the same linguistic directness that names the main island "mainland ", this cairn is known as " the tomb of the eagles". But we duck out of visiting. We were forewarned yesterday that the approach to the site is a little muddy, overnight we have had very heavy rain, so we suspect this will be a very soggy walk to the site. Given that it's £7 each, we decide that prudent caution suggests giving it a miss. A quick aside, this cairn is privately owned and run. By contrast the main sites, Skara Brae, Maeshowe, Broch Of Gurness etc are managed by Historic Scotland. Now it just so happens that if you are a member of English Heritage for 2 or more years then access to Historic Scotland sites is free. So add all the castles we visited in the way up, plus the excellent Culloden site and we have had cracking value for our EH membership Xmas pressie. Thanks Emily and Jonathan.Just a couple of miles away there's an old chapel with a Pictish inauguration stone (has two feet marks to be stood on). Got to be worth a look. Well would be if the chapel was open! Oh well, on round the coast to a couple of places to look for wading birds. Must be the wrong tide time, barely a single Oystercatcher in sight. Not having a good day.At Hoxa there is an interesting WWii gun emplacement overlooking Scapa Flow, built on top of one from the previous war. More importantly there is a tea room. To heck with history we were in need of a cuppa, which we augmented with a bacon and egg roll each, it was lunchtime after all. Suitable refreshed we strolled the quarter mile or so to the edge of the military site. Once again, the ground really wasn't  suitable for walking, especially for two walkers who would have difficulty drying sodden boots and cleaning muddy trousers. So we watched from a distance, scanning the sea for any tell-tale signs of porpoises that often inhabit the sound. Needless to say there weren't any.Remember the anti U-boat barricades I mentioned earlier. For obvious reasons they are known as the Churchill Barriers, and were built by Italian POWs who were interned on Lamb Holm. Like most POWs these were a pretty enterprising group and soon marshalled excess concrete into making barracks paths and even a concrete billiard table!  However one thing their camp lacked was a Chapel. A new commandant was sympathetic to the cause and commandeered a couple of Nissen huts. One of the Italians turned out to be a very good artist and transformed the inside of such a rude building into a work of art. A fantastic painted ceiling above the altar and trompe d'oeil brickwork and masonry transform the simple plasterboard walls. This was wartime, and even a tribute to God doesn't get requisitioned supplies, the wood paneling round the altar for example being salvage from a shipwreck. Where they managed to get the iron to make the wrought iron altar screen, goodness knows but it was 4 years in the making. A true triumph over adversity. The artist stayed on after the war for a year or so to complete the work and was assured that it would be looked after by the people of Orkney. Liz and I were glad to pay our entrance fee, hoping that it will help preserve the building for years to come. 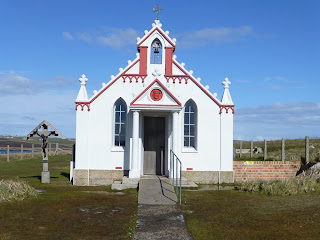 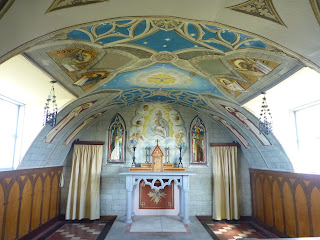 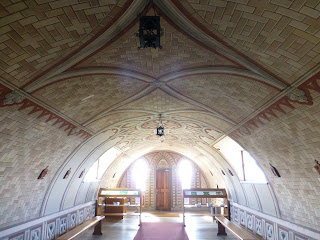 Next to the chapel is a tiny shop, The Orkney Wine Shop. Orkney? Wine?  Do grapes thrive in such a windy maritime climate? Of course not. The wines are "country wines", ie made from fruit which will tolerate the weather. The red wine is blueberry based, the white gooseberry and elderflower and the rosé is based on something called aronia. Strange ingredients but surely not as strange as the shop's potato wine which is a liqueur based on 3 different and rare varieties of potato and matured in whisky casks. It actually tastes pretty good too but we left with just a bottle of red and memories of an interesting conversation with the Dutch owner/winemaker. He must be doing well because the shop's music system is fed by a pair of ART speakers. They are about 10 grand a pair!Remember on Saturday I said we visited a farmer's market and picked up some lamb. Well it was slow cooking whilst we travelled and so good I just had to give it a quick mention! Well done Liz but the meat must have played its part.After dinner and a shower it was off again. This time to a music concert. We like traditional music and Stamp and Go was a traditional a cappella group singing sea shanties and songs of their native land. Native land in this case not being Orkney but t'other end of these isles, Cornwall. Strange to come all the way to here to listen to a Cornish shanty crew but hey it was good!

Some 'orrible weather overnight Monday and still heavy rain on Tuesday morning. Not a good day for going out. So we decided on a housekeeping morning. 2 loads of washing, empty the loo,

The weird title of today's entry will be explained later.Firstly a Sunday morning religious service. It's Beltane, May Day and a significant event in many calendars, including the druidic one. So at