It's Feis here on Islay. A week long whisky and music festival, although the emphasis seems to be on the whisky! This means the island is busy with campervans. Note, I said "campervans" rather than "motorhomes". Whereas these were relatively rare on Mull and Westeros compared to motorhomes, particularly the large horsebox type. Interestingly the tourist population is much younger - campervans are for young folk, motorhomes for the retired wrinkly brigade. Our little Romahome has characteristics of both a campervan (it's compact) and a motorhome (it's a purpose built shell rather than van conversion) so maybe that means we are wrinklies who are young at heart. Sounds about right!

Of course camping with youths carries several advantages, less dogs  on the campsite and live music as a band practice mid morning (possibly even Skipinish, the band we get to enjoy later today, it certainly was a similar sound).Today's agenda is a trip to the Bruichladdich (pronounced brook-laddie) distillery for their open day, part of Feis. Several bands are on, including Skipinish, there will be traditional dancing, craft for sale, the local brewery are there plying their wares, prior to their own open day on Wednesday. A party at a distillery where they've invited the local brewery and have good music - what's not to like?

It's a 2.5 mile walk along the road from the campsite; the sun is shining on the merry band of pilgrims plodding their way joyfully towards the distillery. It's slightly downhill and after about 3/4 of a mile the pier at Bruichladdich hoves into view, not quite nearly there yet, it's a good mile and a half to go. We know when we are getting close by all the parked/abandoned cars. We arrive just after 1:30, an hour into the proceedings and it is packed. Two urgent things on the agenda, find a seat to take the weight of Liz's painful foot and get a beer, the walk was thirsty work. No hope of a seat but one of the sheds has a low wall we can take advantage of. In the midst of the crowd Liz sits, takes her shoes off and I give her a foot massage. Looking up we are sat right next to a large stainless steel tank full of the distillery's new venture - The Botanical gin.

Beers quaffed, foot relieved we can go and enjoy the entertainment. And it's good, Skipinish are a young vibrant Scottish folk band that play a mix of classics, their own material, a smattering of country and western and even a Mark Knopfler number. We buy a CD.

Bruichladdich is an unusual distillery, known for doing things a little differently. For example their branding is based upon an "aqua" color which is definitely at odds with the more conservative branding of some other brands. 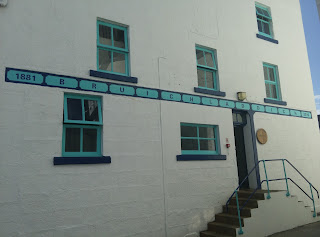 This branding even extends to colouring their bottles an opaque aqua colour. Most unusual. I believe they were privately owned until very recently when they were picked up by the Remy Martin cognac group. Also unusually for Islay, their whiskies are unpeated (as are Bunnahabhain's but the rest of the island has very peaty malts)
Back to the party, it's excellent! Skipinish are exactly the high energy Scottish band needed to get the crowd both dancing and singing, and lubricated by a dream and a beer or two we join them 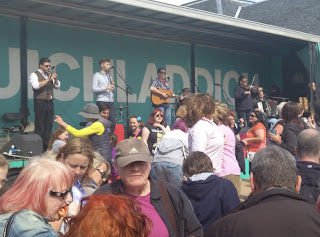 Now we missed the auction, we were in the craft shed buying a small print. However I gather the last bottle sold (if, indeed, there was more than one bottle sold - we missed the auction remember) was a huge 4.5l bottle of the 1991 Yellow Submarine expression. It went for £2,500 I think. Imagine the crowd's surprise when another two bottles were produced. Not for auction but for sharing with the assembly! So we got to taste a £2,500 bottle of whisky (OK, so it was a huge bottle but pro rataing to a standard 70cl bottle and we are really still taking of about £300 a bottle). To be fair we watched carefully and made sure everyone who wanted to partake had done so and it was only folk going up for seconds before we joined them for a second sample ourselves 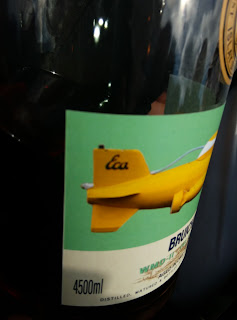 For some unknown reason Liz's foot didn't seem to hurt on the walk back!! But it was a long way and there were two (very packed) hotels in Port Charlotte. We needed to rest and spent and hour or so in the delightful company of Robert and Christine from Seattle who were on they way home after working for a while in Tokyo. Apparently going home the scenic route was as cheap as direct so they decided to add a few adventures en route.

A great party and a lovely day.

Decisions, decisions - do we carry on with Feis events and go over to the Caol Ila distillery for their open day or do we do our own thing. The deciding factor is

Last night's choice of car park to overnight in was excellent. Despite being close to the train line it was quiet enough as few trains use the line. Wi-Fi was available via CalMac

Two Drifters
—
Sunday - a party in a distillery
Share this