The weird title of today's entry will be explained later.Firstly a Sunday morning religious service. It's Beltane, May Day and a significant event in many calendars, including the druidic one. So at 10am there is a full druidic ceremony at the Ring Of Brodgar stone circle (not quite as impressive as Stonehenge, but a heck of a lot more accessible). Somehow it feels right to celebrate the arrival of spring in a 5000  year old ceremonial site, so why not go and watch. Watch? No, participate. Soon we are hailing the 4 compass points and their associated earth/air/fire/water elements and sharing the communal horn filled with ale and the communal honey cake before (symbolically) walking through the Beltane fire to refresh our spirit anew. 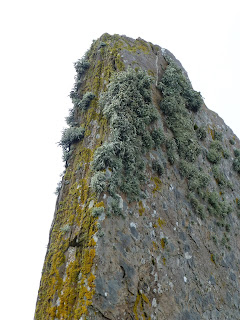 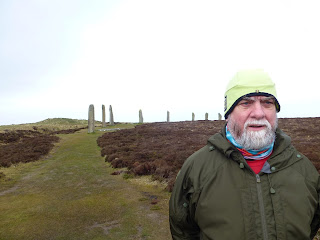 All utter hokum of course, but there is no doubt of the sincerity of the two leaders and in many ways the spiritual concepts make at least as much sense as any other religion. And let's face it it's been a long, long while since the last person was massacred as part of a druidic crusade or jihad.Spiritually refreshed we could face the cold and damp of spring with a new vigour. Well we could decide to protect ourselves from the cold and damp and go for a drive round the island anyway. After a while our calls to the spirit of the sun were answered and so we could take in the next archaeological site of the day, the Broch of Gurness. A Broch is an ancient iron age communal stone roundhouse and this is Scotland's best preserved example complete with small surrounding houses. 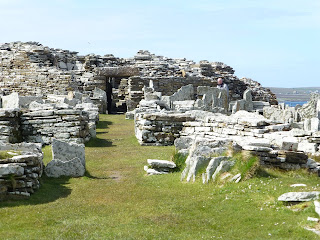 Next stop Skara Brae Neolithic village. Impressive, and would have been awesome had we not previously seen Jarlshof on Shetland, which, whilst being smaller is also impressive. The preservation of a 5000 year old village, older than Stonehenge or the pyramids,  is absolutely remarkable. Interestingly the newly found village just down the road at the Ness Of Brodgar could even outshine Skara Brae when excavation completes. 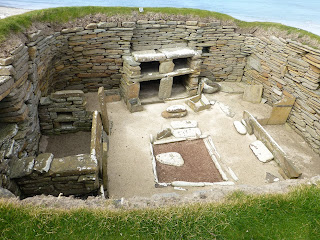 One last site for the day, Maeshowe, the best chambered cairn in Europe. I must admit I had thought that honour went to Newgrange in Northern Ireland which I believe is bigger. Maeshowe is impressive, it's workmanship impressed me more than Skara Brae. It's nothing to look at from outside, just a large grass covered bump but you need to take the guided tour, the only way to see the interior. Access is via a low narrow tunnel, which requires 10m of extreme stooped walking, too much for Liz who elected to remain outside. Once inside the cairn is several metres high and the central chamber easily accommodates 30 or more people, so today's party of 6 had plenty of room. The neat square edged, smooth faced stone and almost mathematical corbelling of the roof suggests mediaeval rather than something 4 millennia earlier. Fantastic! And just like Newgrange, the winter solstice sun rises over a distant hill and shines right down the tunnel entrance flooding the main chamber before resting on one of the side chambers. Remember this must have taken 100 years to build, with life expectancy of only about 30 years that's 3 generations. Some commitment.One last tale from the guide, at the external end of the entrance tunnel there is a huge one ton stone that was used to close the entrance. One guide remembers how as a young girl show would come to the cairn and shut the door. That's a 1 ton door engineered so that 5000 years later a 10 year old girl could still close it. My mind is boggling at this point even if yours isn't!4 millennia later Vikings broke into the cairn in search of gold and silver grave goods, leaving behind the finest example of runes outside Scandanavia. Nothing changes, the runes were mainly 12th century graffiti, indeed one of them 3m up in the wall, pretty much reads "Killroy was here, higher than the others". Magic! 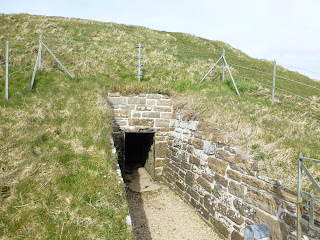 Oh, today's title. A couple of decades ago on a family holiday to North Uist, day 1 I see my first ever oystercatcher so take great pains in pointing this out to the girls. Then we see another, then another, pretty soon we realise oystercatchers were ruddy everywhere we looked. And so they are here on Orkney, but ever since Friday's walk we've heard curlew but not seen them, so this morning I spotted one of the wing and pointed it out to Liz, then we saw one in a field, then another, then a pair. Pretty soon every field we drove past had its own resident curlew, or two, or three. Slightly better spots of the day were a raven and short eared owl.

Having toured the north mainland yesterday, it was the turn of the south. For those unfamiliar with Orkney, the main island, appropriately called Mainland, is linked by a causeway road to 4 other

Busy, not us but Kirkwall. Take a small town with narrow streets serving a population of 9000 and then add 4500 tourist incomers from two cruise ships and suddenly the sleepy streets are

Two Drifters
—
Sunday - Curlew is the new Oystercatcher
Share this