Off to Oban today on the 12:30 ferry. Lets work backward, need to be at the ferry port for 12, it’s an hour’s journey, best allow another hour for traffic hold ups, give us enough time to get fuel etc. So need to be offsite by 10. Need 90 mins for breakfast, wash, prepare the van etc so an 8:30 alarm call. Nah, at that time of the morning it will still be cold so will take me at least 15 mins to get out of bed, lets make it 8:00 alarm.

All is good and despite chatting to folks on site we actually leave about 9:45 despite not actually arising from bed until 8:30. We are really getting organised this holiday. We were right to add extra drive time as we find ourselves stuck behind a slowish motorhome for the first 11 miles. Definitely not many overtaking opportunities. Still in Oban for 10:50 and time to find Tescos for fuel and a newspaper. I’m getting back into crosswords after many years. Arrive at the ferryport in plenty of time at about 11:30. No coffee shop. Still it’s only a couple of minutes into town.

Now yesterday I made a mistake. Whilst in Inverarary I should have picked up a copy of the 2002 omnibus edition of Para Handy stories. I didn’t because book space is short in the van and I decided that, despite my lack of love for Amazon, I would get the Kindle edition. Yes, gentle reader, you may noet that not only Amazon but Tesco another of my love to dislikes has featured highly in our shopping. In the case of Tesco it’s not the lure of a few pence per litre cheaper fuel but the fact that they are the only UK supermarket chain that stock local bottled beers. And a good range, at supermarket prices. OK, the don’t stock the very tiny local breweries I like to seek out but they don’t do a bad job and are usually a good stocking up point (nothing new in Oban though). I digress, back to the Para Handy saga. There isn’t a Kindle edition, so I will need the paper book after all. Also overnight David, who is regularly checking my house and tidying my mail off the doormat in return for the week’s Radio Times, doesn’t have a copy, it would be nice to get one for him. So instead of coffee we wander into Waterstones. Nope, it is out of stock and probably out of print. It appears to have sporadic short print runs. Try W H Smith they say. OK, but never again. W H Smith has taken to this fad of splitting books by category, so any book you might want could appear in one of many places in the store and you are never quite sure you’ve checked them all. Anyway the section with local novelists didn’t have a copy so I think it is safe to say W H Smith didn’t stock either.

Whilst waiting to go on the ferry I noticed free CalMac Wifi, so a quick eBay sourced two new copies and I was in the midst of the order when waved to drive onboard. Still having WiFi I managed to complete the order for books about a Clyde steamer captain whilst on the Mull ferry – how cool is that!

The 50 minute crossing was millpond like. Nothing to comment really, it was too cold to spend the time above deck although we did pass some picturesque castle as we sailed by (and had I internet access I would have looked up details). We were third off the ferry so had a fairly open run – rather than head directly to the campsite early we decided to take in the island’s one ‘large’ town Tobermory. Large being, of course, a relative term, this photo captures most of it 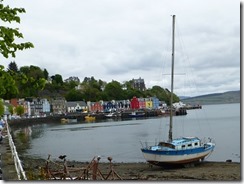 The quaint coloured houses are a well known icon and my sister informs me the town and its coloured houses feature in the BBC pre-school programme Balamory. Now there was something I didn’t know, We got time to get a coffee and see about distillery tours, However a wander through the shops found a whisky shop selling the Tobermory 10 yr old (the only one we can afford) £5:50 cheaper than the distillery itself so we may miss out on the distillery tour! It’s perishingly cold again today too and I’m still looking for a heavier weight fleece. In one of the shops we found exactly what I was looking for, and on sale too, so we bought it. Trouble was it was pink, women’s and in Liz’s size.

A quick digression on Mull geography and road network.  Basically the ferry arrives at Craignure about 1/3 the way up the eastern side and there are just two A roads: one going about 40 miles due west across the island and the other, which we had just taken going 30 miles north to Tobermory. We now needed to get to Fionnphort on the extreme western edge. Two options, double  back to Craignure and across via the other A road  or take one of the two B roads. There’s a B road which loops around the top of the island (about 50 miles) and another that loops and joins the halfway point of the two A roads. Oh, this is hard to describe – go look it up. And whilst you are about it, I’m just about to describe how remote Fionnphort is so check on that too! Anyway the A roads are mainly single track roads with passing places which should have warned us about the B roads.  We doubled back half way to Craignure on the A road and then took the narrow, windy B road inland towards the coast at Gruline. A busy road too, lots of stopping and pulling into passing places. Traffic thinned out once we reached the coast but was still busy enough. It’s hard driving, the roads are narrow and twisty, the B road has a poor surface so being mindful of potholes is also necessary, sheep seem to think the other verge grass is greener and either loiter with intent or just meander as they feel fit. All this whilst keeping good distance vision for the next passing place and oncoming traffic, ideally adjusting speed so both coincide. This means the driver is a bit hampered when it comes to appreciating the scenic views, and the coastal part of this was very ruggedly scenic. It is also a great place for wilding, and several vans were pulled up off the road where they’ll stay for a couple of days. Not far after Gruline the road changes, it starts to meander round a mountain, having steepish up and downhill sections and sharp bends. The road also narrows even more and the road surface deteriorates even further. There is grass growing up the middle. Getting it wrong could mean coming off the hill faster than you might want or damaging the axle. Not a good place to meet 2 cars in close convoy coming the other direction. I try to reverse but there isn’t a passing place for some way so I squeeze tightly into a bend putting my wheel as close as I dare to the road edge. I’m on the mountain side not the sea so no drop if I get it wrong but the surface drops dramatically after the small scree section at the edge of the tarmac so I’ll have great trouble getting back on the road if I get it wrong. I judge I’ve pulled over enough – the first driver isn’t happy and tries to get me to tuck in further but there’s nowhere to go so he folds in his wing mirror and inches past. Strangely the following car seemed to get past without quite so much fuss. I pull back onto the road and there about 10m past where I let them pass was a passing place! The b******ds could easily have slipped in to this, one at a time and we could have passed with no effort. Pain! No further incidents although a couple of horrible bangs and clangs, I think I fired a stone up into my underneath and also hit a pothole sufficiently deep to ground my bumper. We won’t be coming back along this road!

Fionnphort is at the extreme western edge of this island of extemes and is very remote (you did go and look it up, didn’t you?). Fidden Farm campsite is a further 1.25 miles down, curiously the best tarmaced bit of road on the entire island. Still single track, of course, but nice smooth black hard top. The farm is a working farm and sheep abound on the approach road; entering the farmyard itself we are greeted by 3 border collies, who come up to say hello before bounding off again. I must say that were I to ever contemplate dog ownership (most unlikely) then the border collie would be my choice. Fees paid we are told to camp where we like. This is not a conventional laid out campsite, more an area of flatish dune and moorland. No electric, WiFi or other such frills, just a washblock with toilets, fresh water and chemical disposal point which I have yet to investigate (I only do so when necessary) but the Jolly Roger flying over it as a marker is ominous. We spot a small gap in the row of vans parked overlooking he bay and with careful positioning can get the van almost level so that’ll do. The view isn’t bad, either. 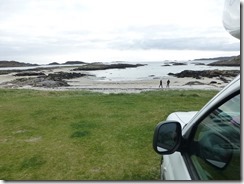 There are a few vans around us. If you are ever planning to come here, my tip would be to pay at the farmhouse and then not continue on onto the main area but go back down the entrance road, there’s a small gravel path leading to dunes there which tends not to have quite so many vans.

A long day’s driving – probably 80 miles or so on single track road. An earlier night, methinks.

Well, I thought Liz said we were off to see the tomb of Columbo . Yep, Iona today to visit the monastery and the place that Christianity first came to these shores (or more

Gentle reader, it is likely that I shall be off-grid for a couple of days, depending on how/when we find internet on Mull. Our proposed campsite is very remote and unlikely to