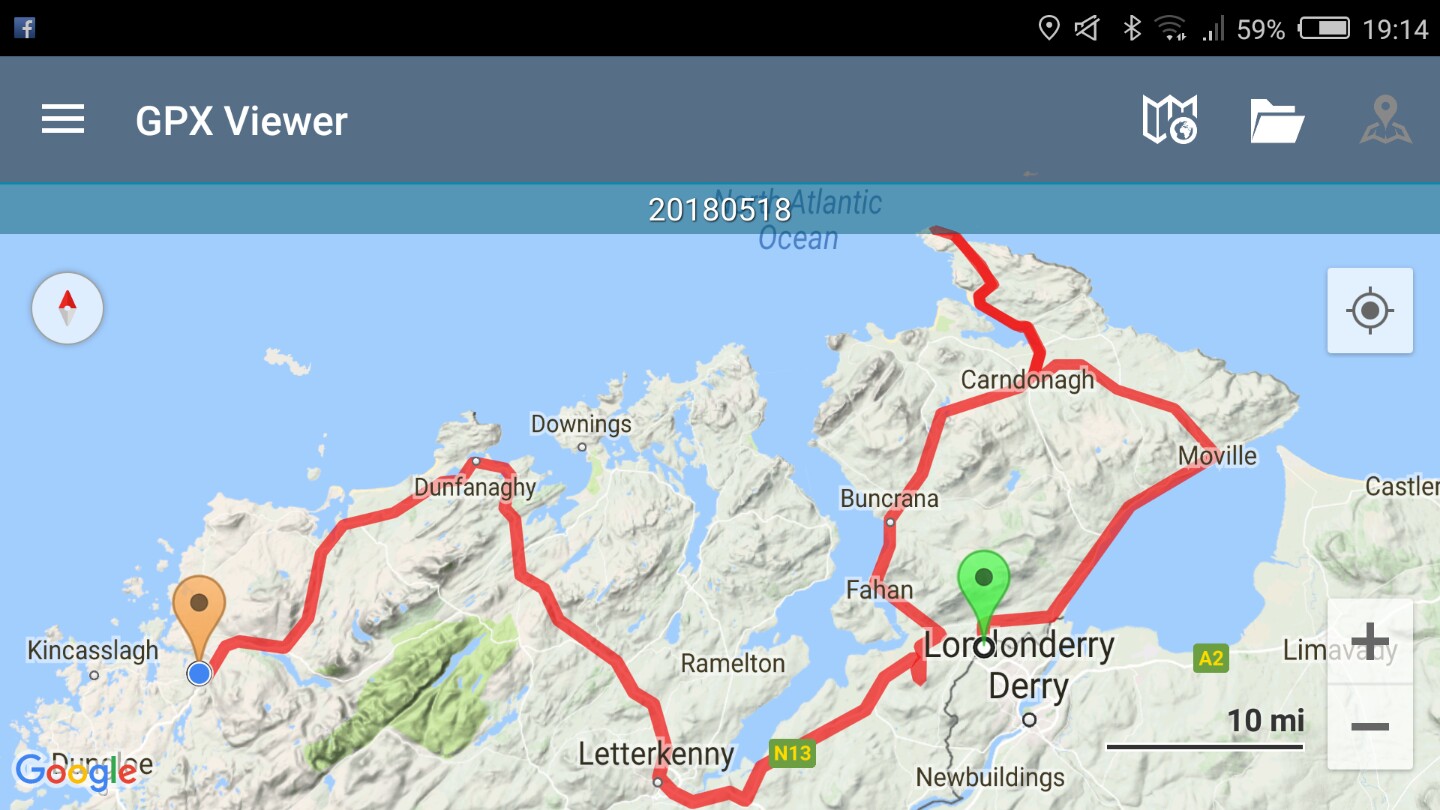 Yesterday, Liz included a picture of Mount Errigal in her blog. I was driving so didn't get the opportunity. We'll head back into Glenveagh National Park. Whoops, just driven too far and no photo ops this side of the mountain. Rats! Still the scenery hereabouts is stunning 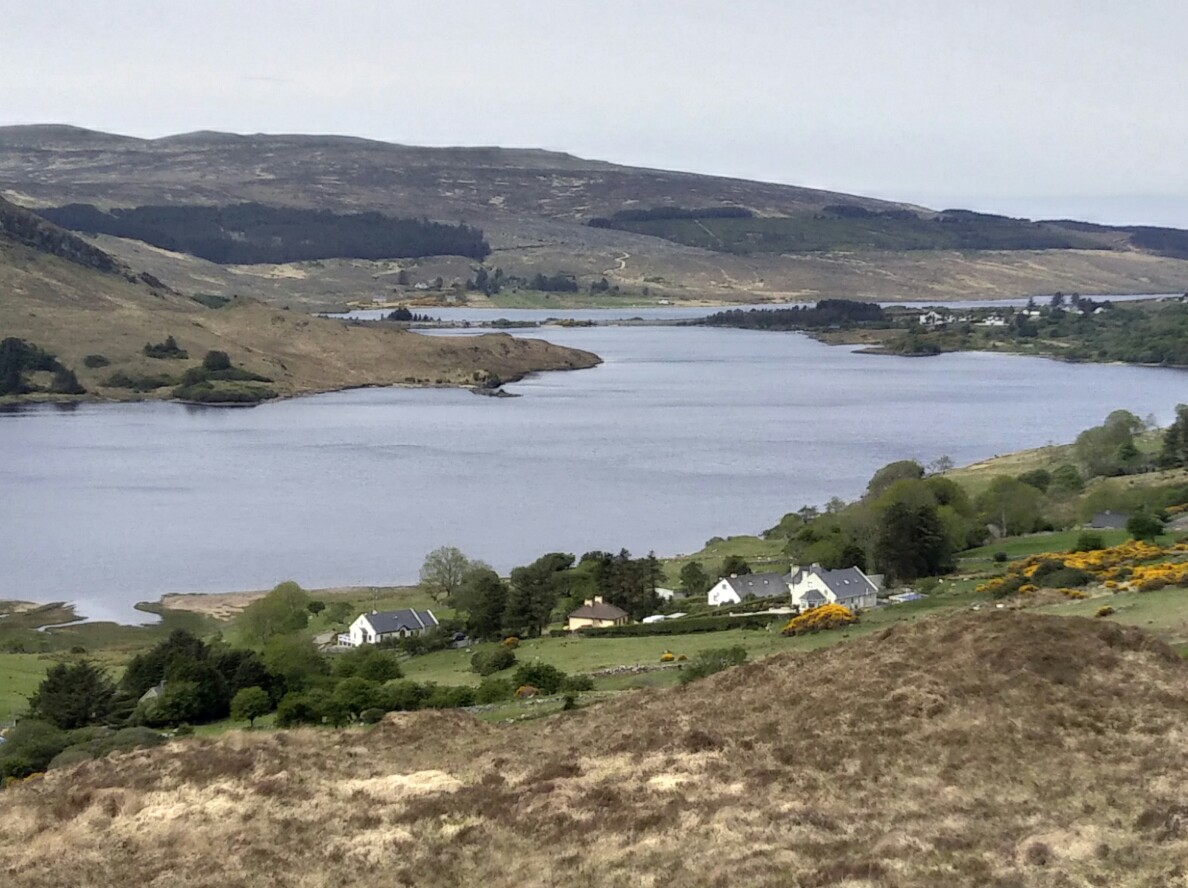 The little pull-in where I took that has a small mobile coffee vendor. Love her advertising 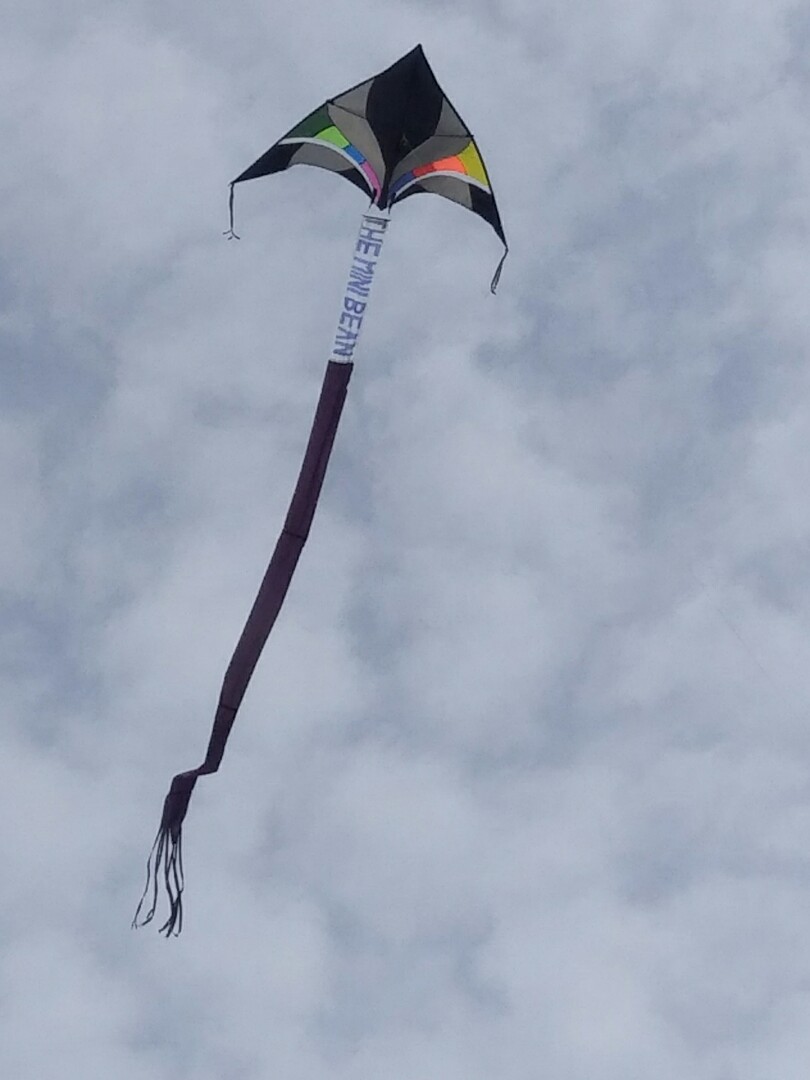 We drive on muttering about how beautiful Donegal is and how we must plan to spend a couple of weeks just in Donegal alone. Today would have been a perfect day for walking in the National Park.

However the Wild Atlantic Way awaits. Carry on round the park and deciding not to stop at the heritage centre we head out to Adara. There's John Malloy's Donegal Tweed mill just on the outskirts of this busy looking town (oh, and, surprise, surprise a Romahome R20 just like ours parked on the High Street). The mill's factory ship had a lot of tweed and knitwear and I thought prices rather good (€140 for a gent's tweed sports jacket, for example). Lot of Donegal and Aran wool too. If I could find more information on the heritage handwoven Aran crois belts I might buy some. As it is Liz just buys some tweed squares for patchwork.

Now the Glengesh Pass with double arrows on the map sounds interesting. Will it be too narrow? One way to find out! Interesting, this is not looking good, we are driving along what appears to be a narrow but decent mountain road but our Garmin GPS has us in the middle of nowhere. Hmm, Google Maps doesn't seem to have the road either!! Actually it was fine, just enough to squeeze two cars in most places, steep and twisty - at one point I thought I might have to drop into first gear to recover from a tight hairpin but it just about chugged in 2nd.

Just before the summit there was a pull-in 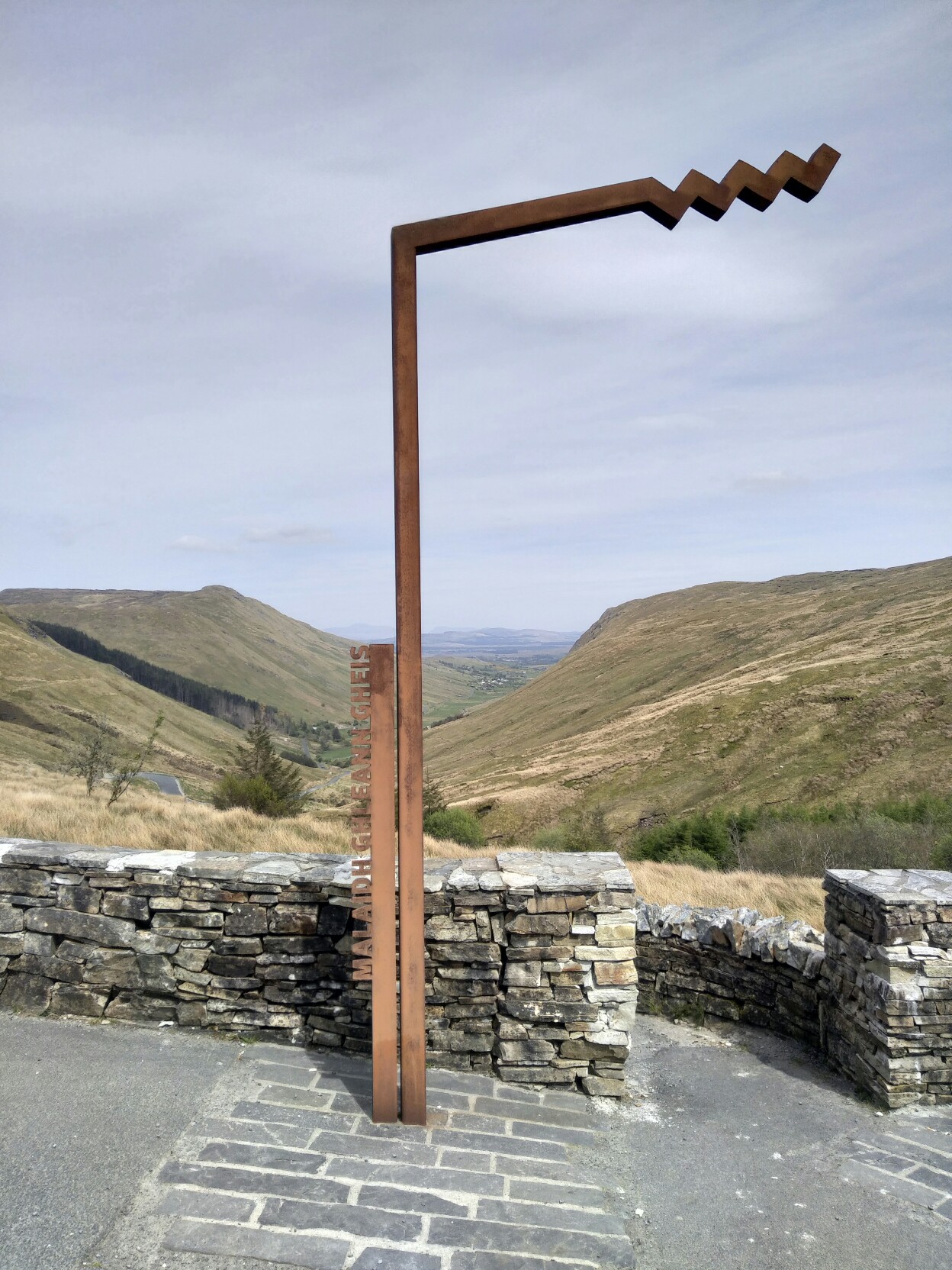 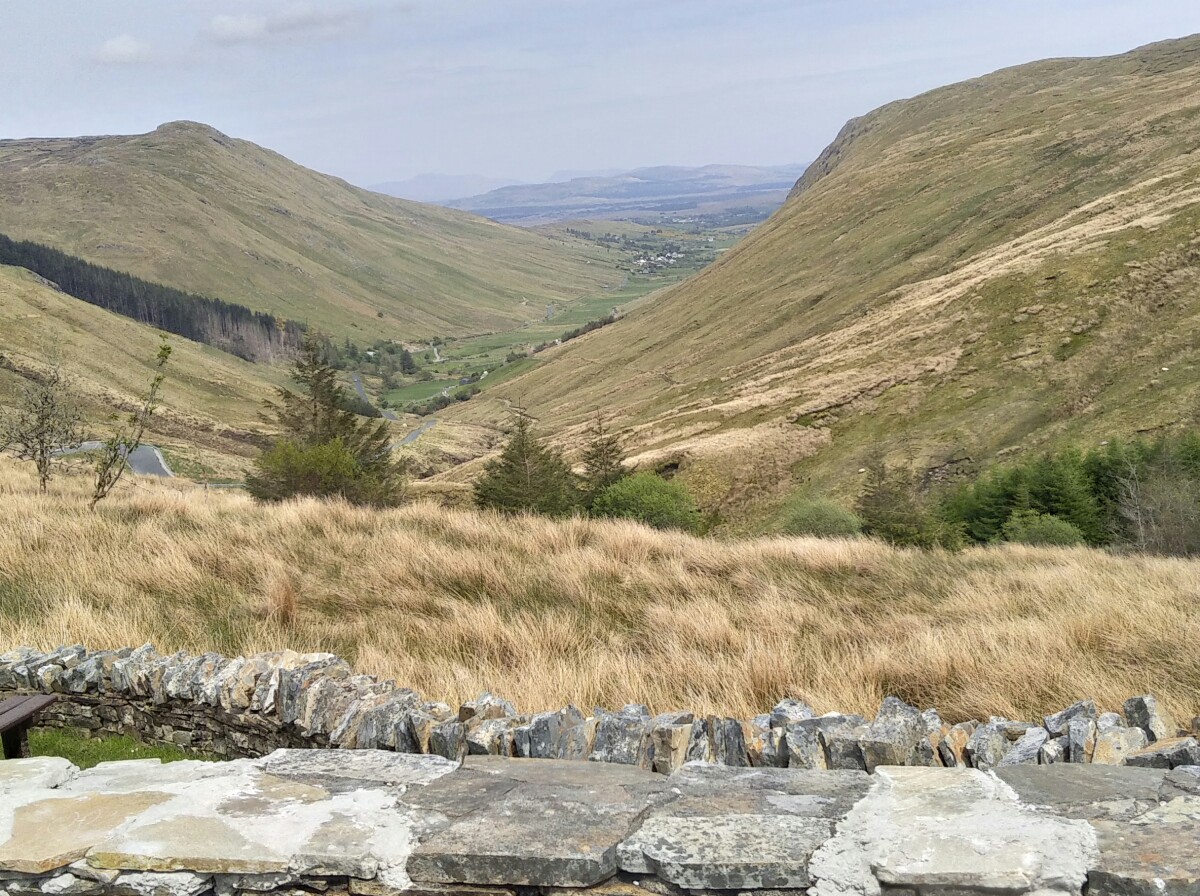 We're back on the Wild Atlantic Way and, like the American car that stopped us, looking for the cliffs of the Slieve League. Let's say it isn't easy, so much so that I even had sympathy for the lost Americans. We took a wrong turn and a few miles later found ourselves at Malin Bay (nothing to do with Malin Head which is 100 miles away) 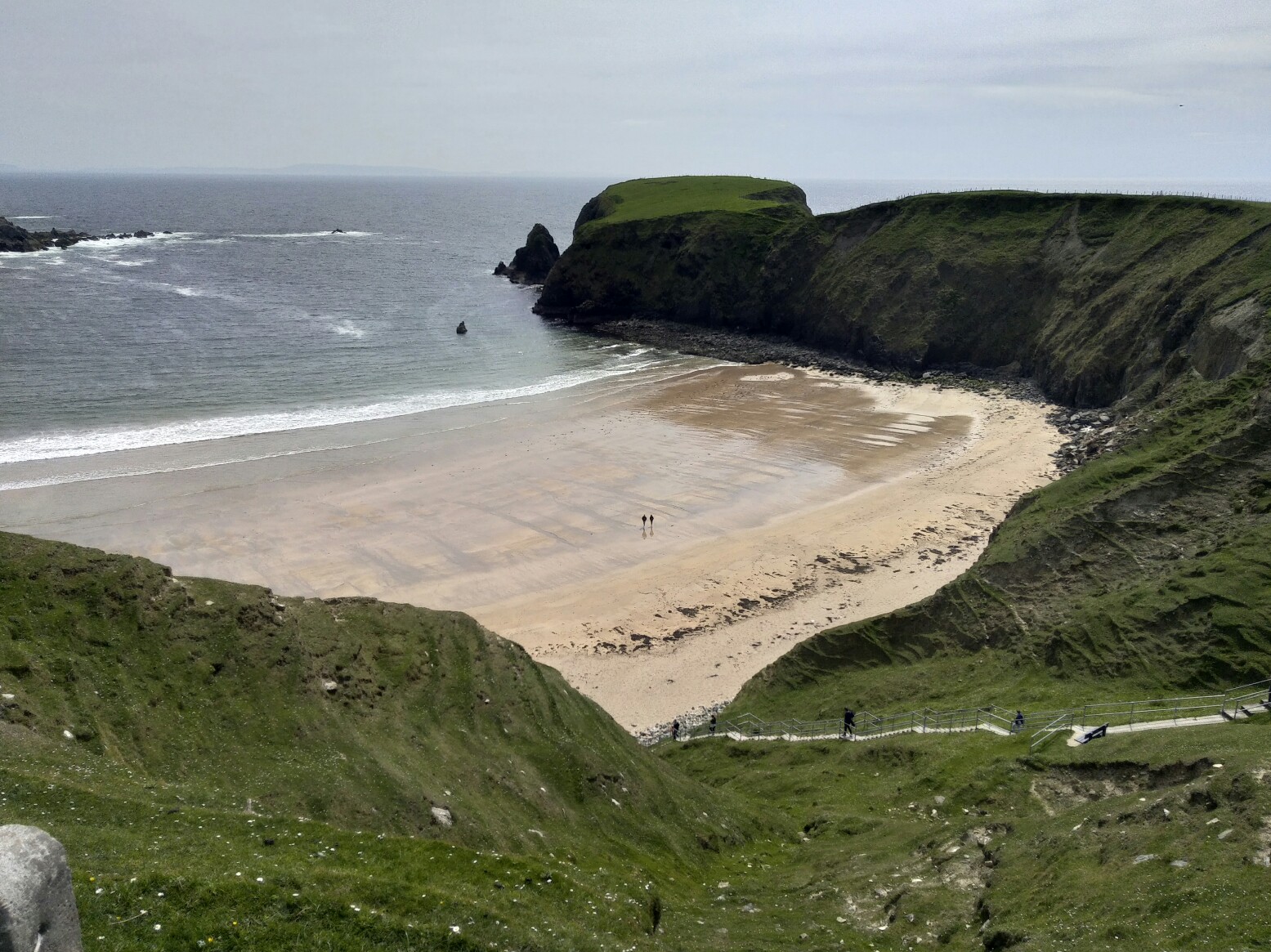 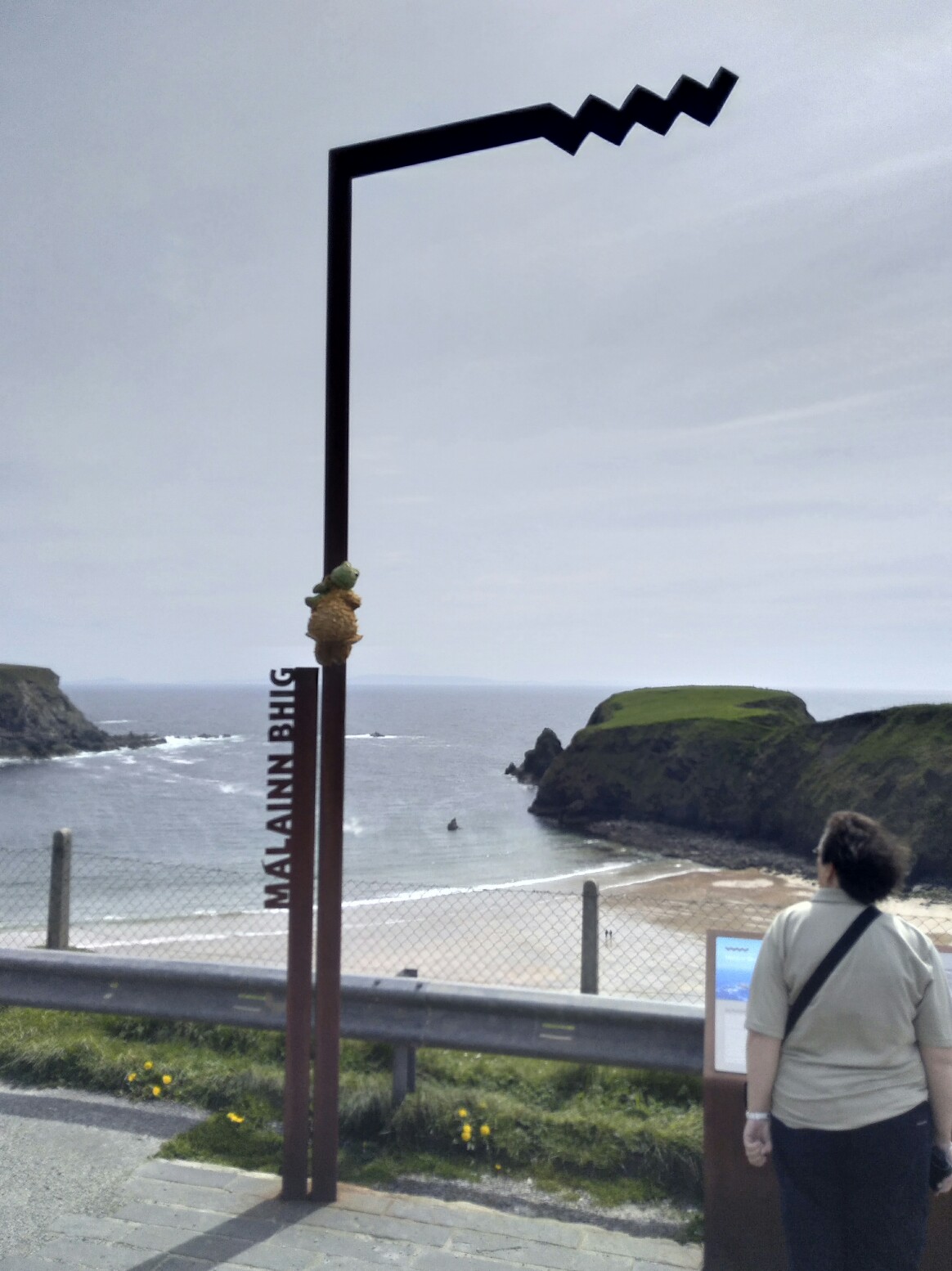 Back to the main road, round a little further, there's a signpost "Sliev Leag". Hmm, another road neither Garmin nor Google seem to recognise. And this one is wide enough to have a white line for much of its distance. We follow some Americans painstakingly slowly up the hill. Every tiny farm track seems to be a major decision point for them. Eventually there's a couple of large car parks and a toilet block and what may well be an information centre in more peak season. Despite the road continuing on past a barrier gate this has to be the car park despite the occasional car opening the gate and proceeding.

We park up and start walking, there's about 300m of very steep road before the road curves away to what must be the vantage point. No, another couple of hundred metres there appears to be a summit, that'll be it. A full one and a quarter miles from the car park, almost all uphill, and in parts steeply so, we espy a second car park! That's the vantage point. But the walk was worth it 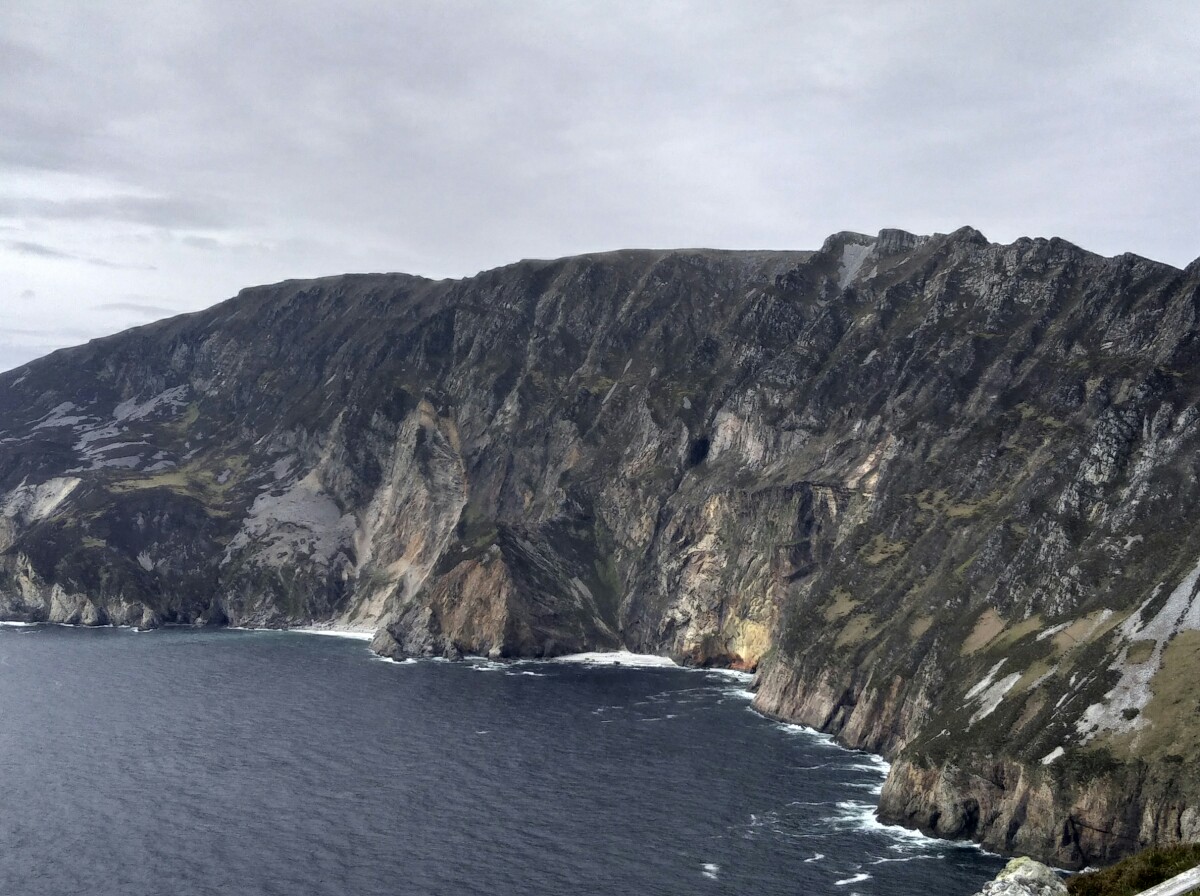 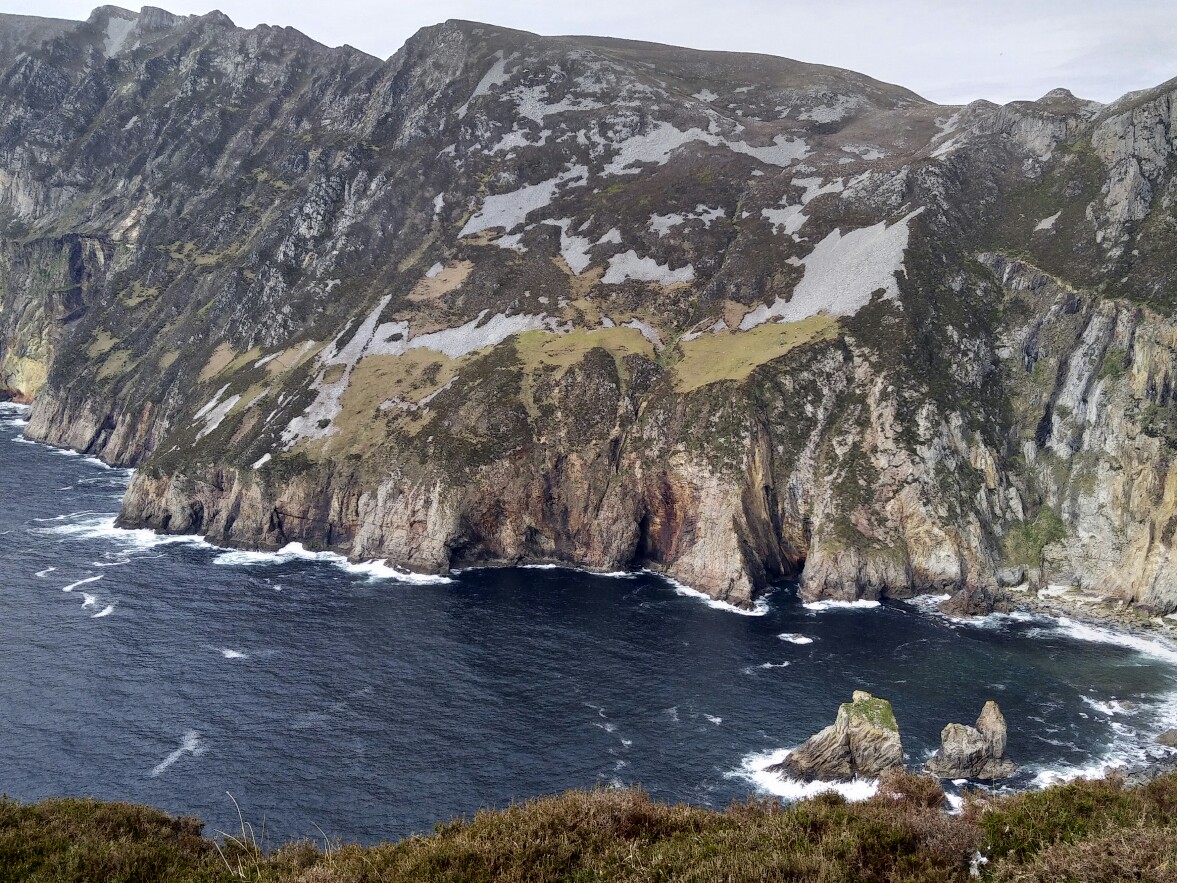 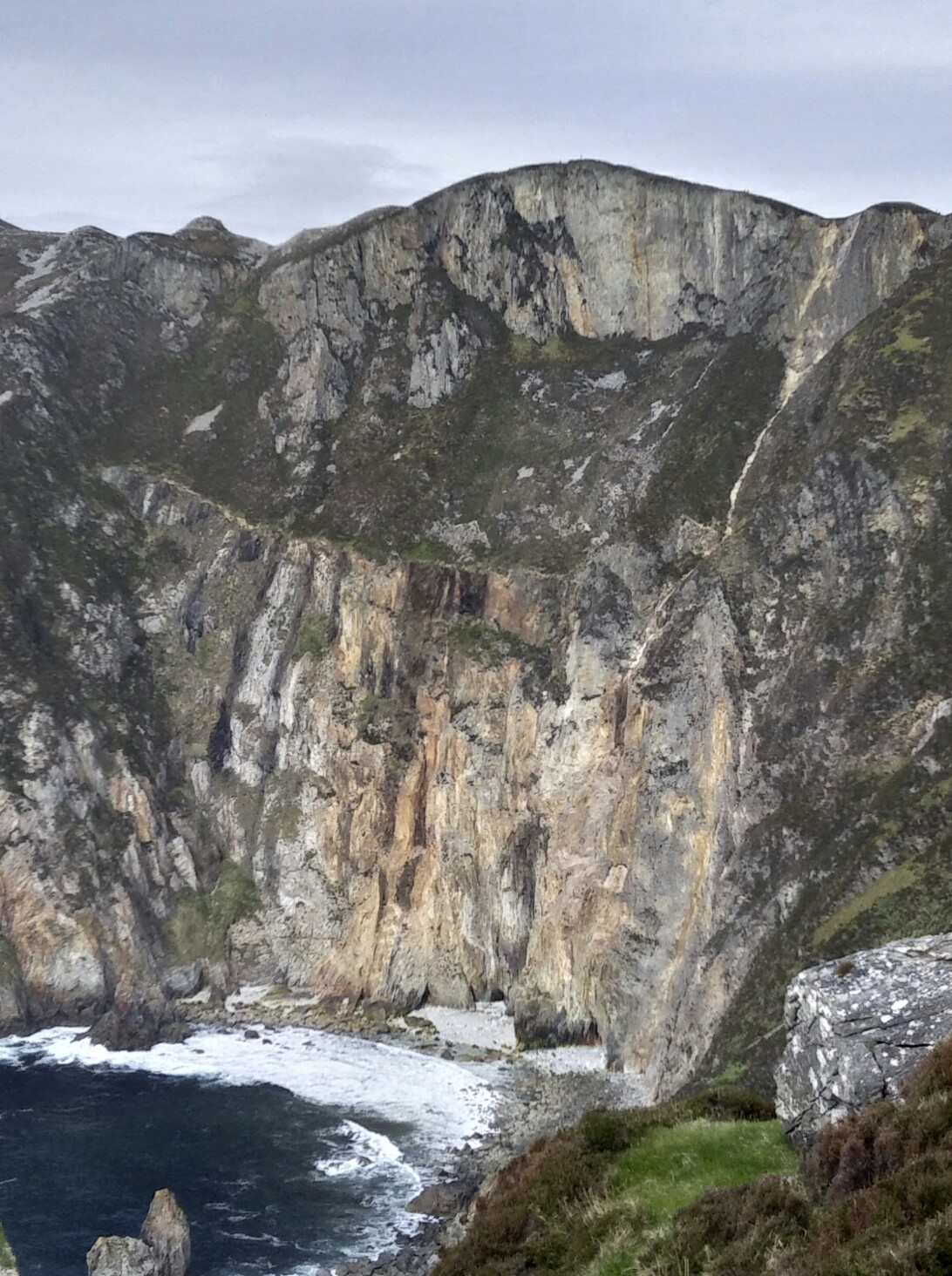 This 30 minute stop has turned into a couple of hours. Time to head off, round the coast via Killybegs to Spierstown Camper Parking just a couple of miles north of Donegal town.

Not sure what to make of this site. It's basically some farmer's yard with hookups, fresh water, water and chemical disposal and a single large well appointed toilet and shower room. One room, one toilet with shower together in it. Unisex and either toilet or shower are out of bounds of someone is using the other. WiFi was included but useless, although he is trying to rectify this.

But you're also paying for Joe's fantastic hospitality. Free scones on arrival (and we got some more on departure), a lift from Joe into town (we'd planned to walk) and even an offer of a lift back if we called. We didn't, even after midnight on a Saturday a taxi was less than a tenner.

So a mixed bag. Toilets and site were impeccably clean but might be a bit frustrating if the site has 5 or 6 vans (its capacity). Then again Joe would probably open up his house facilities - it's that sort of site.

Donegal is a nice enough town but Colin Irwin's "In Search Of The Craic" had suggested that despite lots of music in bars real trad Irish music might be hard to find. The Reel Inn seemed the most likely and the band, 3 locals aided by a holidaying Manx camper on accordian were pretty good but a mix of 60s folk, Johnny Cash and bluegrass, even with a good smattering of traditional Irish songs wasen't quite the traditional blazing Donegal fiddle music we'd hoped to find.

Still they were good enough that it wasn't until well gone midnight before we left. 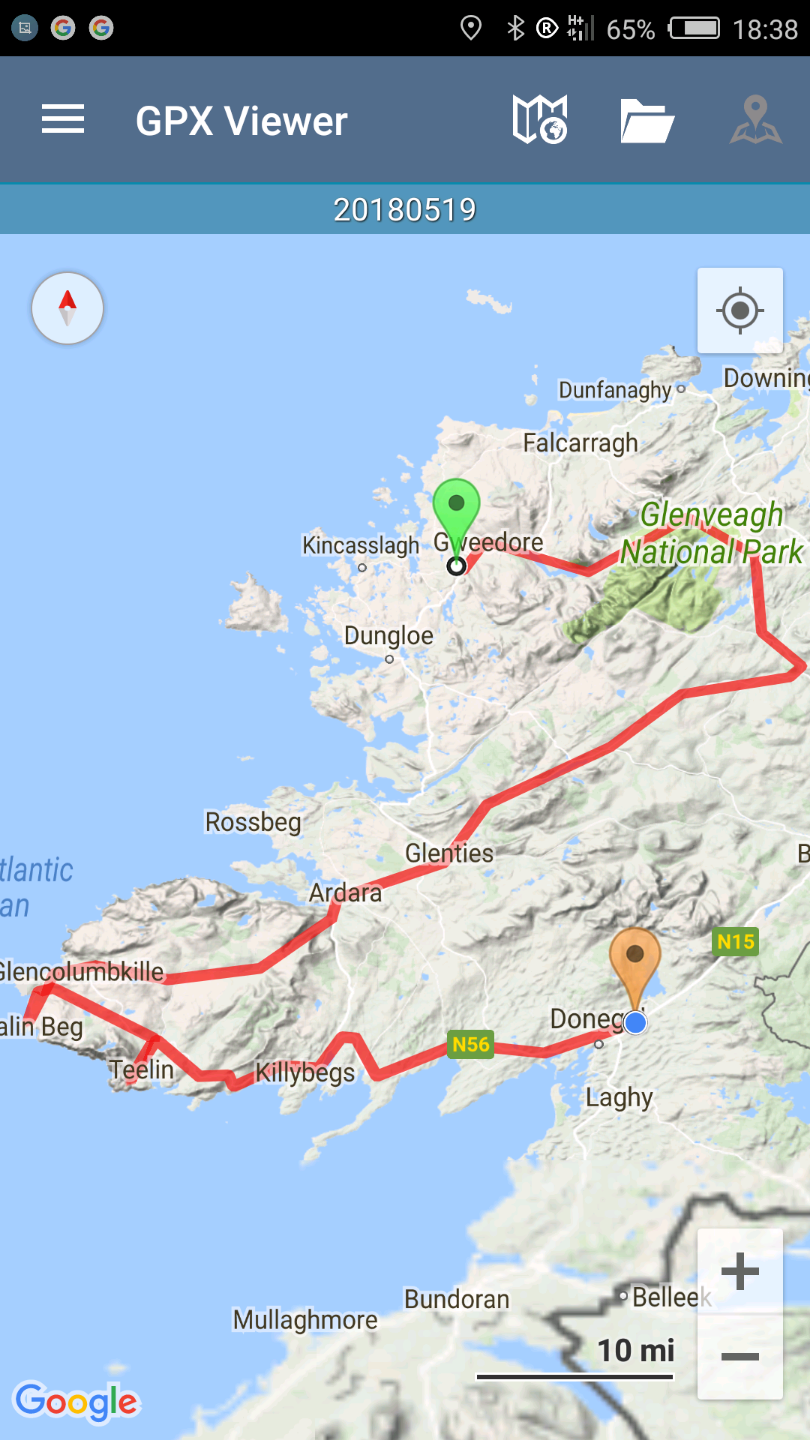 So, about 10 days ago, probably in Belfast, Liz has this idea "why don't we make sure we visit every Irish county, both north and south of the border". Brilliant idea

Two Drifters
—
The Donegal Ring (of Fire)
Share this