A quick explore of the site. Not much has changed since the 60 staff worked here in the eighties, still the open round metal conduit terminated in metal light switches, the short with a little spherical blob on the end of a tiny shaft. And it is warmer here, not so much wind but still very cold air temperatures.Liz is cooking today. Another stew slow cooked in our insulated hay box style cooker, it will slowly cook whilst we travel. Ah, problem. It was so cold in the van overnight the olive oil has solidified! Each day a different challenge. Fortunately the meat has enough natural fat that we don't need to perform the metamorphosis back to liquid.Onward, but first a local stop, the Clyneish distillery, it's on our doorstep so it would be rude to pass it by. As we pull into the car park a heavy flurry of snow breaks out and so we trudge to the distillery through the snow, wrapped in our topcoats, hats and gloves. Is there a more typical Scottish scene than that? If this were a Victorian novel we'd open the door to be welcomed by genial hosts, invited to warm ourselves by the roasting fire and be offered a revitalising dram. Well apart from the open fire bit, that's a pretty accurate scene. Guess what, yep - another bottle of malt, Clyneish 14 yr old is added to the van's collection.Onward, this time as far as Wick, the weather abating enough to allow a quick tour of the town where Alexander Bain, inventor of the electric telegraph and electric clock hailed from. A blue plague and Wetherspoons pub commemorate him. We read the plague but gave the pub a miss choosing to move on to out of town shopping at the large Tescos.People may know my dislike of supermarkets but today pragmatism overcame principles. We needed somewhere to eat cheaply, and somewhere to shelter from the showers. By showers I mean some of the heaviest, most brutal hail we've ever seen. It would have hurt being out in them. Tescos was warm and dry, had nice toilets (always a consideration when we are traveling in the van) and free internet. Onwards, next stop John O'Groats. Now it's been a while since we have been to Lands End but my memory was of expensive parking and exploitation. I'm sure that these days it is far, far worse. JOG, by contrast, was totally the opposite. Free parking, little shops that sold useful stuff as well as the obligatory tourist tat. So much so that we bought our nephew's birthday present there. I mentioned the contrast to one of the shop keepers and she was very hopeful JOG would stay unexploited, let's hope so too. 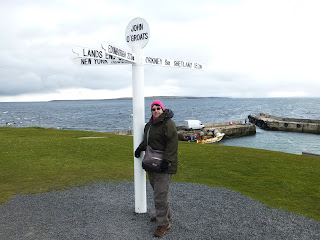 Onwards, Dunnet Bay, the end of the line (the Traveling Wilbury's are running through my brain as I type). A nice campsite with a view across the bay to Dunnet Head, the most northerly point of the mainland. A nice walk tomorrow but given the weather we'll probably drive. And anyway we've a ferry to catch. Oh, and did I mention the gin distillery we past a mile back?

The wind is coming in from Greenland. That means, here on Speyside, it passes over the high Grampians (such as Ben Nevis) driving it upwards to become even colder and forcing it to

Two Drifters
—
The end of the road
Share this