Wherever you think of sporting universities I doubt Aberystwyth is foremost. Yet it must breed the fittest students in the UK, having its buildings atop a steep hill on the northern edge of the town (I don't think Aber is a city).

Of course our campsite is in the valley on the southern side of town meaning a steep climb out of the campsite, down an equally steep slope to cross the river and then up again to the National Library Of Wales, fortunately just below the Uni. On reaching the library first port of call is the coffee shop for a rest! 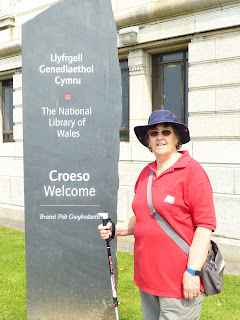 The reason for the slog was a Girlguiding Wales exhibit entitled "Pushing Boundaries", an interesting crawl through the archives of over 100 years of Girlguiding in Wales, including some fascinating home movie footage from 60-70 years ago. A nice display which perhaps didn't push quite as many boundaries as we'd expected.

There are 4 ancient books of Wales. We saw 3 of them: The Black Book Of Carmarthen, The Book Of Taliesin and The Book Of Aneirin. It was fascinating to see 13th and 14th century hand written books in such fantastic preservation. They made the printed Civil War books and Shakespeare First Folio seen positively modern. Curiously the one we didn't see, The Red Book Of Hergest is the only one I personally own a part translation of, as it contains the famous tales of the Mabinogion.

Back down the hill for a mooch around town. Well a mini-mooch (cue Cab Calloway) as we'd spent so long in the library it was now 4pm. Too late to ride the fenicular but we did take the air along the promenade. Personal note to daughters, I took Mum to the Welsh Gold Shop, stood her in front of the window and offered to buy her shiny things. She said there was nothing she wanted. I tried (and now have the evidence documented here)!

There is no doubt that of all the places we have visited this area of mid-Wales has the friendliest folk. A simple shopping transaction inevitably leads to a conversation and everyone is eager to help. Well almost everyone; the group of half a dozen or so 14 year old schoolkids I stopped and asked directions to the Library seemed most bemused that this old git didn't know where such an obvious landmark was. We did, it's just we were standing directly under a signpost to it which pointed 180° opposite direction. Some jolly, drunken, student jape, no doubt.

A very pleasant Italian meal (and despite a busy restaurant, a 5 minute conversation with the waitress re campervans since her hubby did conversions) and then the inevitable pub.

Once again we return to England. Wales had been interesting for, amongst other things, its language. Welsh was heard on several occasions over the last couple of days and, of course, all the

I did warn you the blog might get a bit sporadic. It's all about when time permits. Unlike proper writers I don't have the luxury of waiting for the muse to inspire byt