The wind is coming in from Greenland. That means, here on Speyside, it passes over the high Grampians (such as Ben Nevis) driving it upwards to become even colder and forcing it to deposit it's moisture as hail or snow. Going further north means a less uplifted airstream which should be slightly warmer and less precipitous.North it is then!Stop one is planned for Inverness, indeed the original agenda had us stopping a couple of nights there but our brief supermarket stop in the howling wind and driving sleet/hail suggests we are not far enough north yet.I get ahead of myself, just before Inverness we pass the site of the battle of Culloden, so a quick diversion to the National Trust Of Scotland's museum. No, museum is the wrong word, it is an interpretation of the battle and by far the best of such we've ever seen. The background and prelude to the battle is shown via a twisting corridor, with Jacobite philosophy and activities in one wall and loyalist on the other. Just reading either wall gives one side's timeline and zig-zagging between the two gives a measure/counter-measure account of the run up to the final battle. There's also a huge horizontal interactive LCD display stepping through the key movements like some high-tech board war game.The display culminates in a room with each of the 4 walls one huge video screen renacting the battle with you stood in the midst of the turmoil and carnage (it does have suitable content warnings on the doors). It's loud, gory, the life-size images are close up and it's just a little bit scary! Excellent.Then there is the option of a tour of the battlefield (in this weather, you've got to be joking), a couple of curators explaining the weaponry and medicine of the day and another of those lovely large horizontal LCDs, this one running through the movements on the field during the battle. The curators were interesting. I saw a flintlock musket being dry fired (a flash in the pan) before getting to appreciate just how damn heavy they were.They believe they have a fairly accurate picture of how the battle must have gone from extensive archeology a few years ago. From the clustering of flattened musket balls to indicate where lines came under fire to the clustering of buttons and buckles torn off in the hand-to-hand melees. Must have been an interesting piece of forensics.On north then to the small town of Brora, famous for a distillery which closed in the 80s and recently reopened as Clyneish. The original whisky fetches very serious money these days. Brora ought be famous for the Y Station here but of course, a source of intercepts for Bletchley Park and then latterly GCHQ is never going to be a major highlight in the tourist books. The station closed in 1986 and was used by a local furniture mover as storage but when he retired a couple of years ago he was left with an interesting historic property without use, so has recently turned it into a campsite. When I say recently we are it's first visitors! So I'm sitting typing this inside the military barbed wire enclosure that once intercepted U-boat signals and sent them on to Bletchley. A pity the aerials aren't still up. Now we've come further North the accents have softened and the people seemed much friendlier. Everyone we meet in our way out to the pub for dinner last night went out of their way to say "Hullo" and Ian the campsite owner brought us a small gift for being his first customers. A nice touch 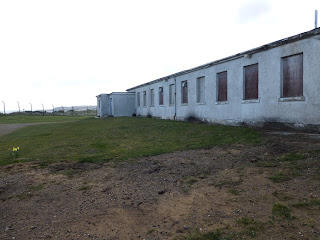 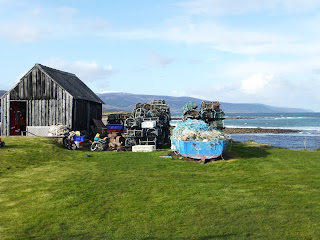 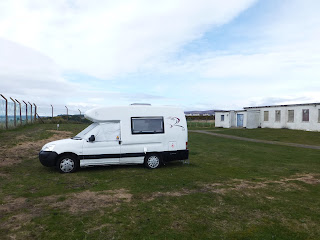 A quick explore of the site. Not much has changed since the 60 staff worked here in the eighties, still the open round metal conduit terminated in metal light switches, the short with

As a local poet once put it "The best laid schemes o' mice an' men gang aft agley. The idea behind choosing this campsite was a lovely walk along the bank of