Time to move on. Leaving Kilkenny and heading for the famous Brownhill Dolmen. A huge portal tomb with a topstone reckoned to weigh 150 tons. 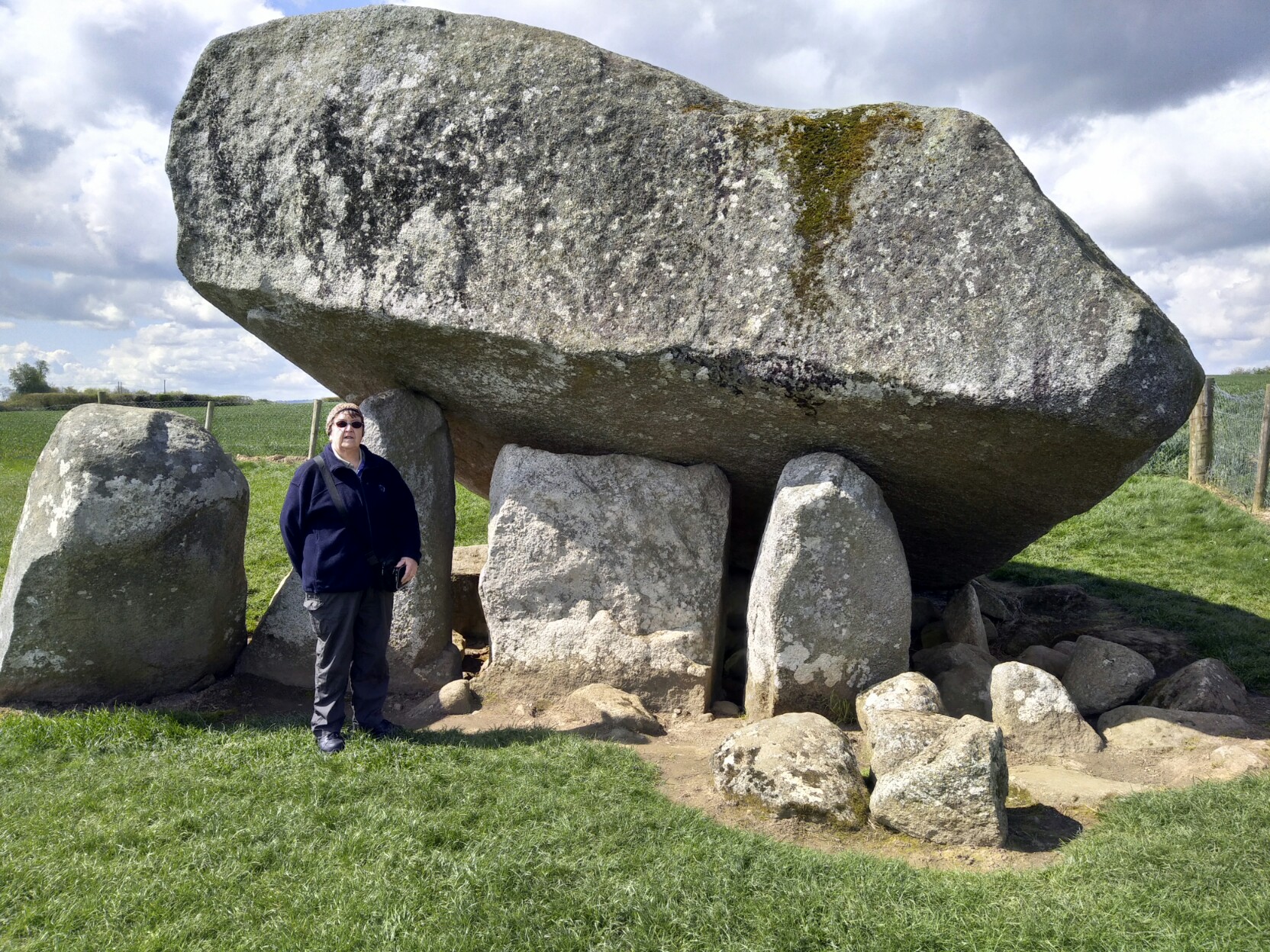 Like Neolithic structures in Shetland it is totally open to the public, yet, also like Shetland, had not been vandalised, defaced or abused in any way. Imposing and impressive. Surprisingly it has not been excavated. Possibly archaeologists don't fancy a large lump of stone landing in their head if they get it wrong.

Frustratingly we pass the wonderfully preserved Haroldstown Dolmen a few miles further on but there is nowhere to pull over.

Before either dolmen, we passed through the town of Carlow. Stopped at a supermarket to stock up. But I wanted an ice-cream. I'm sure my daughters would know why!

Tonight's sleep is planned for a pub car park tucked away in the Wicklow mountains at Glendalure so we thought we ought find it, check it out and if unsuitable hastily cobble together plan B. Liz persuaded the satnav to take the widest roads and it was pretty easy driving (not sure I'd want to do it in the dark though). The sun is shining today, despite the hail shower, and the country pub is heaving. Two quick coffees and a chat to ensure overnighting is OK and we head off. To Avoca, home of the fictional Ballykissangel. We park up and Liz gets that deja vu moment and remembers we stopped in the exact same car park when we brought the girls and my mum here 20 years ago. Avoca's other claim to fame is its weavers which dates back to 1723. The shop is the usual mix of interesting local products and tourist tat. So we wander across to the weaving shed. At the back a shed load (literally) of power looms with interesting brightly coloured warps 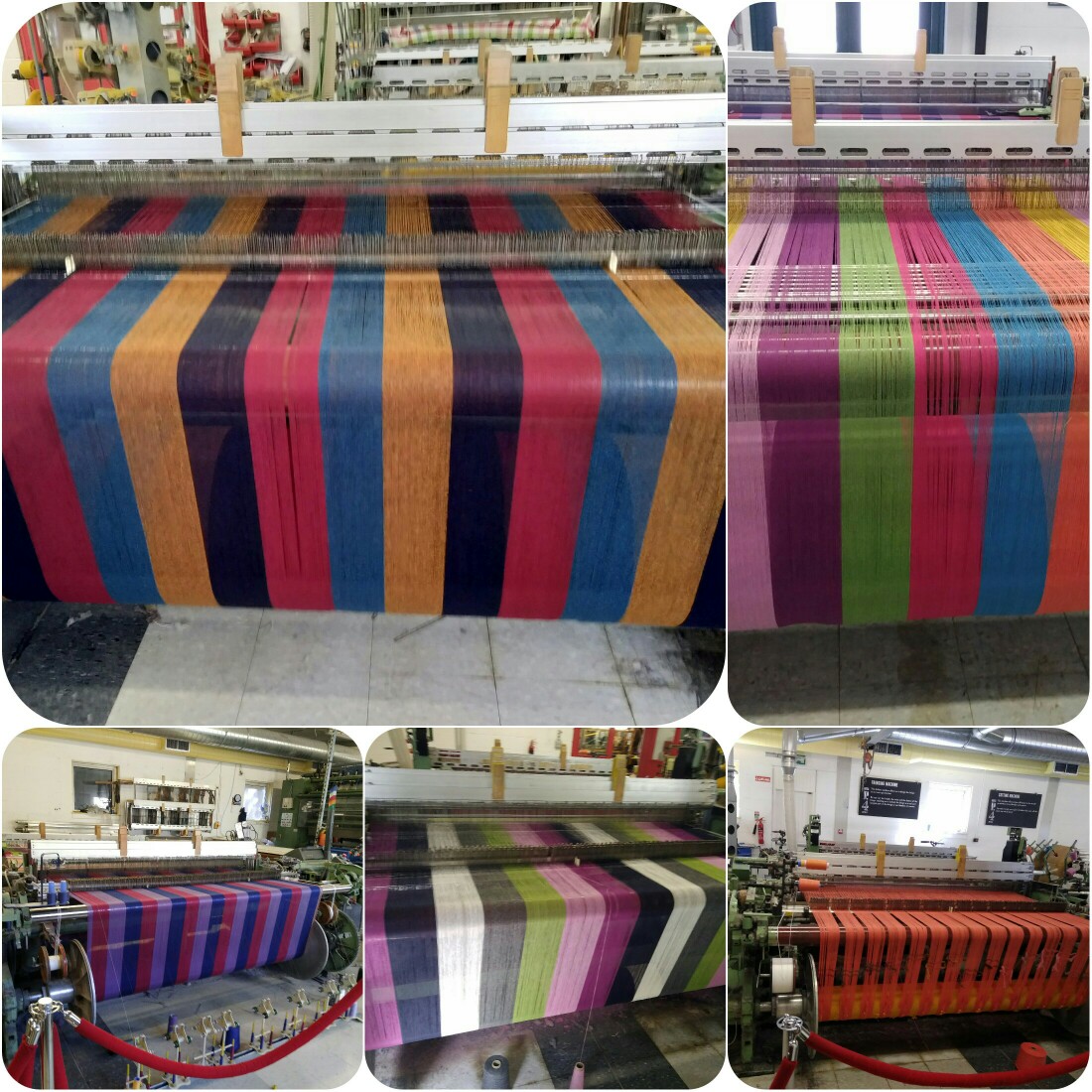 The front shed however has a couple of handlooms 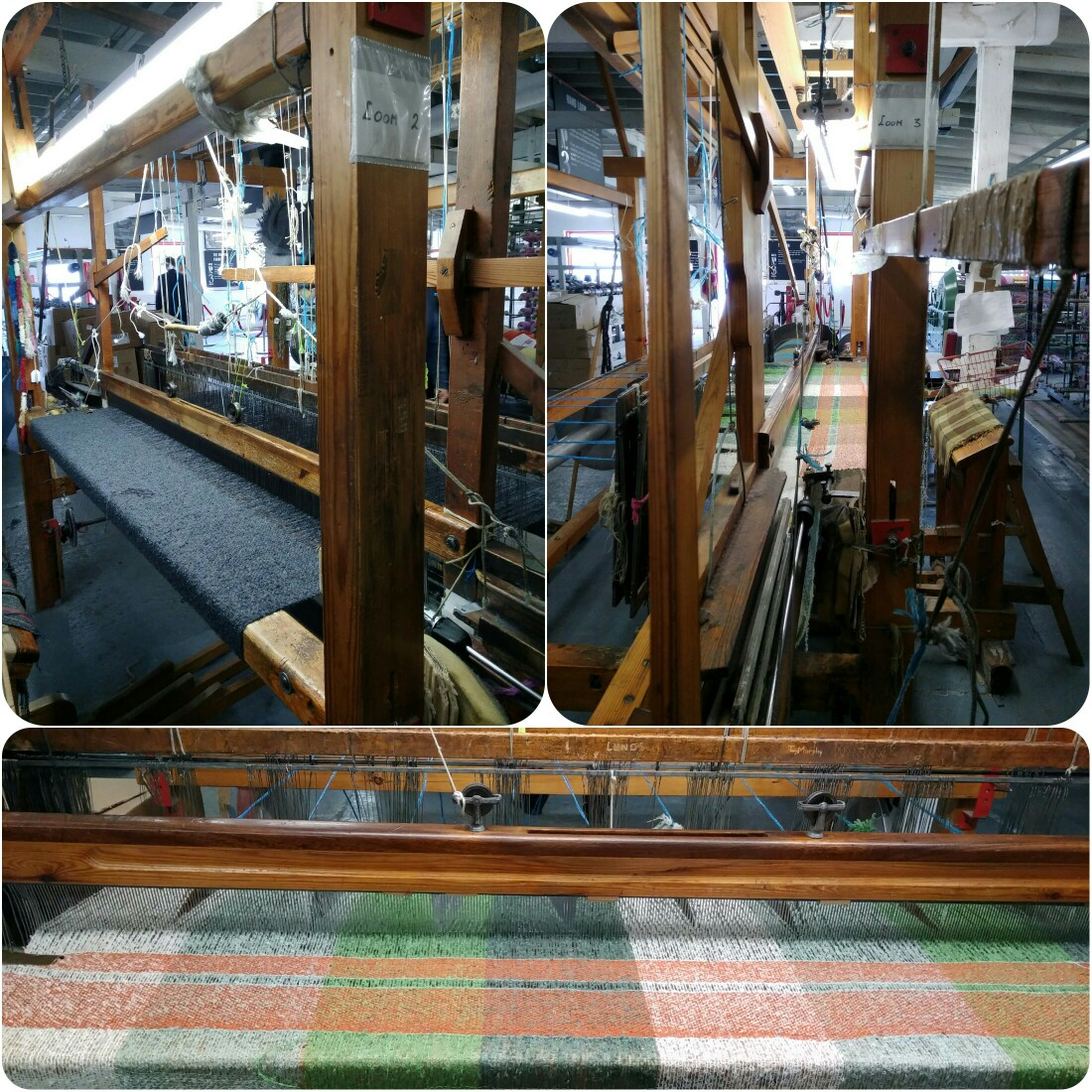 and a warping machine that looked the part! 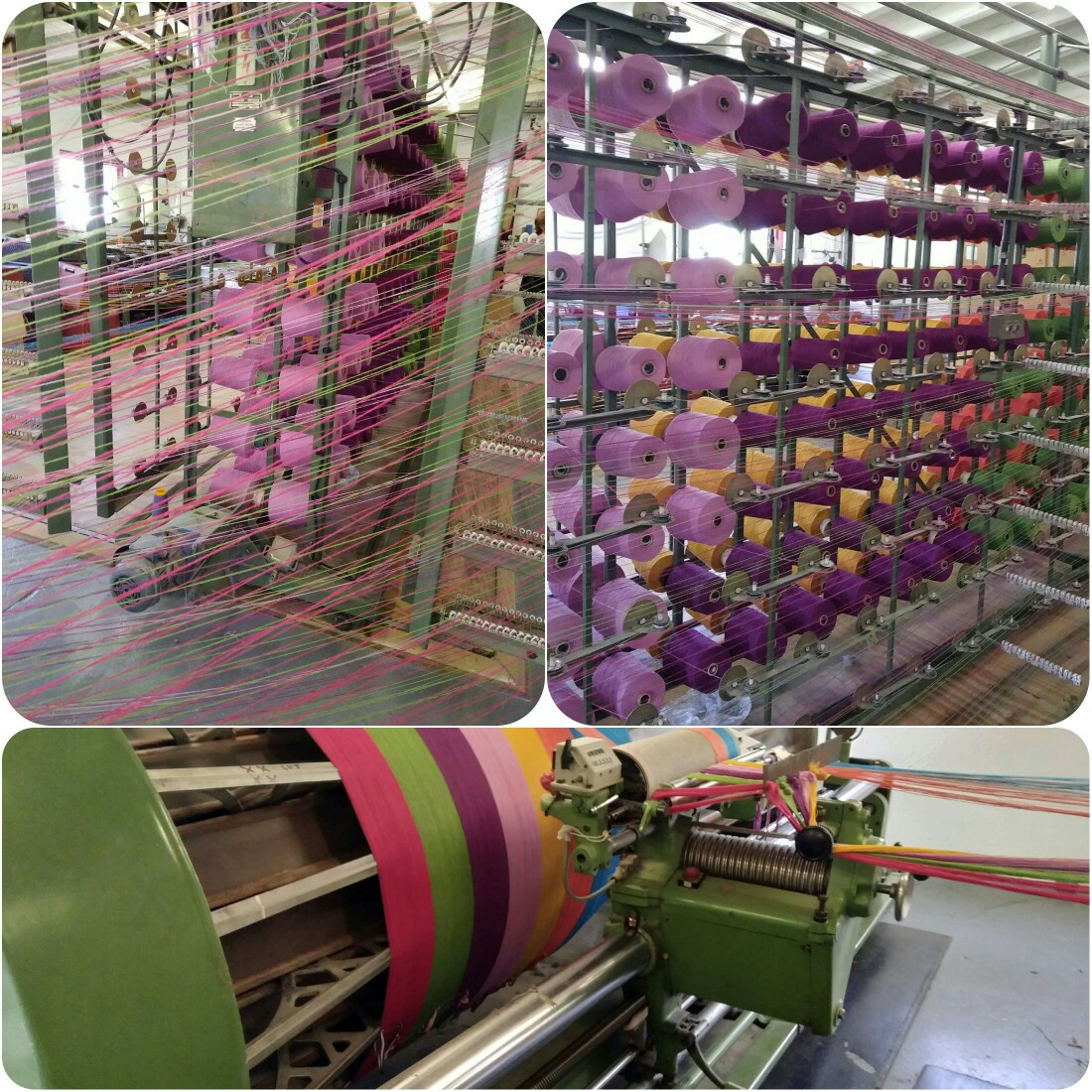 One of the hand looms was being worked, although how the weaver managed to maintain an even beat whilst stopping for conversation is a true testament to his skill. We chatted, I mentioned a small loom at home and a bookmark loom in the van. He wandered off and returned with a weighty bag - end of bouclé mohair cones in an assortment of colours, way more than enough to weave a small blanket, and also a large clump of thrums, the tie on ends of some nice wool warp. I think the fact that I pointed out a broken warp thread on the piece he was weaving helped. It was interesting watching the ease with which he located its heddle and reed dent (for non weavers, found out exactly where it needed to be threaded back) and joined it into the existing woven fabric.

We bade him a fond farewell and thanks for the couple of pounds weight of yarn and headed back to Glenmalure via The Meeting Of The Waters where, just outside Avoca, two rivers meet. Nothing exceptional in that perhaps, were it not for the poem of Thomas Moore:

There is not in the wide world a valley so sweet
As that vale in whose bosom the bright waters meet;
Oh! the last rays of feeling and life must depart,
Ere the bloom of that valley shall fade from my heart.

Yet it was not that nature had shed o'er the scene
Her purest of crystal and brightest of green;
'Twas not her soft magic of streamlet or hill,
Oh! no, -- it was something more exquisite still.

'Twas that friends, the beloved of my bosom, were near,
Who made every dear scene of enchantment more dear,
And who felt how the best charms of nature improve,
When we see them reflected from looks that we love.

Sweet vale of Avoca! how calm could I rest
In thy bosom of shade, with the friends I love best,
Where the storms that we feel in this cold world should cease,
And our hearts, like thy waters, be mingled in peace

The actuality was maybe not quite so impressive: 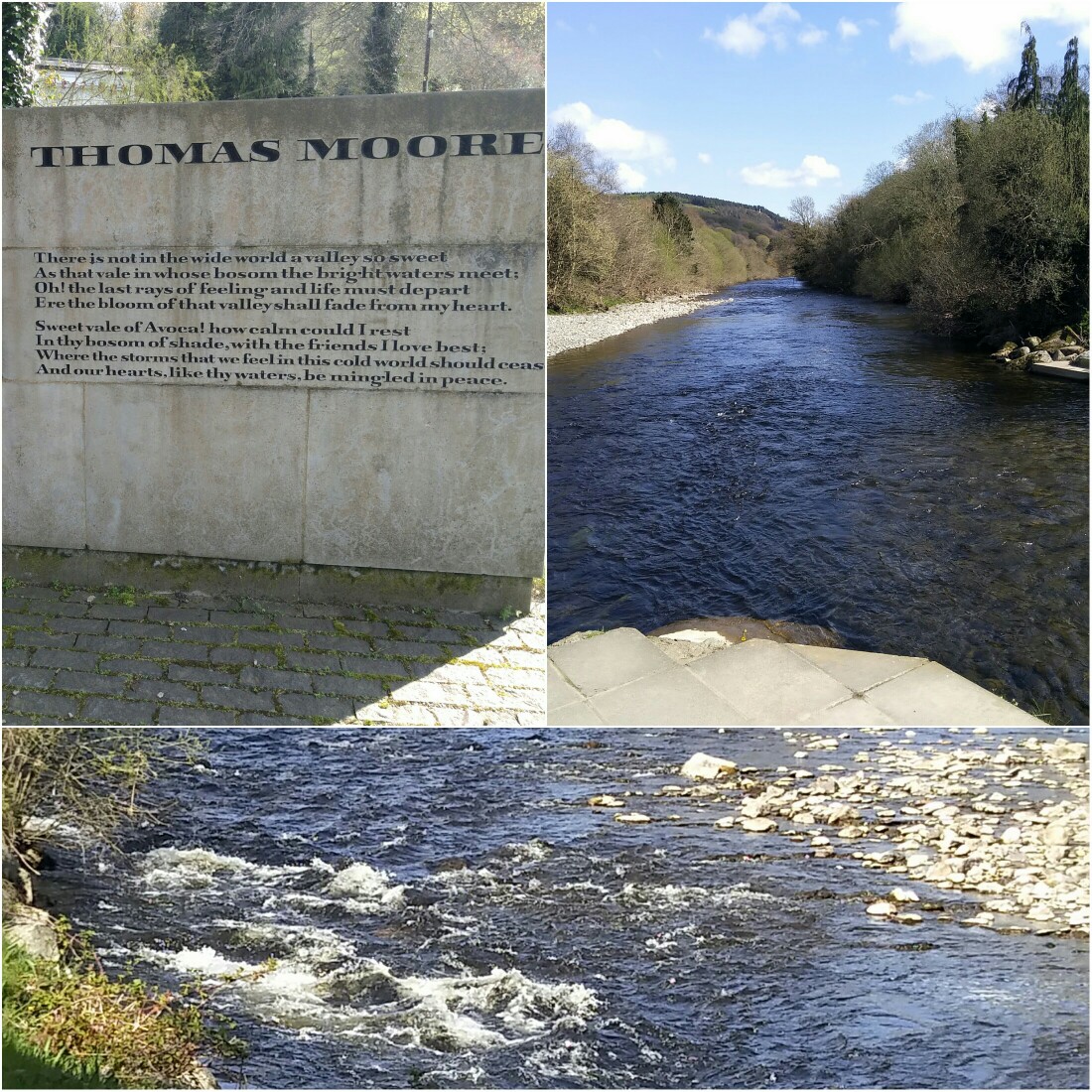 The pub is nice. Some good craft beers and we await their food. It ought be good as it's still heaving now, early evening.

Before we retired last night, the staff jokingly warned us to beware the ghost in the night. Nothing heard, we both slept soundly. It was nice that the hotel/lodge was open from

Looks like we've started to hibernate. Another cold night and so another slow morning. Eventually around noon we leave the van, this time taking the scenic river route into Kilkenny. A very pleasant