The single priority for today is to sort that juddering out. Something is definitely wrong.

Before leaving we use "the facilities" at Askeaton Leisure Centre. There's a big sign reminding us that they are for customers only and I half expected a reprimand from the receptionist. Instead I got a wave and a cheery "Hallo". This is weird. The town has provided an aire, toilet facilities in its leisure centre but has no other tourist infrastructure, no restaurants and I doubt many tourists would have warmed to Paula in the pub as we did last night. Perhaps they were hoping the Aire would revitalise the town. It really is sad that it hasn't.

In nearby Rathkeale there's a Tyrestop (think Kwikfit). I'm impressed that the mechanic wants to experience the problem so takes the van up the nearby N road and soon his hands are shaking on the wheel. Up on the ramps and off with the wheels. Maybe this is the cause 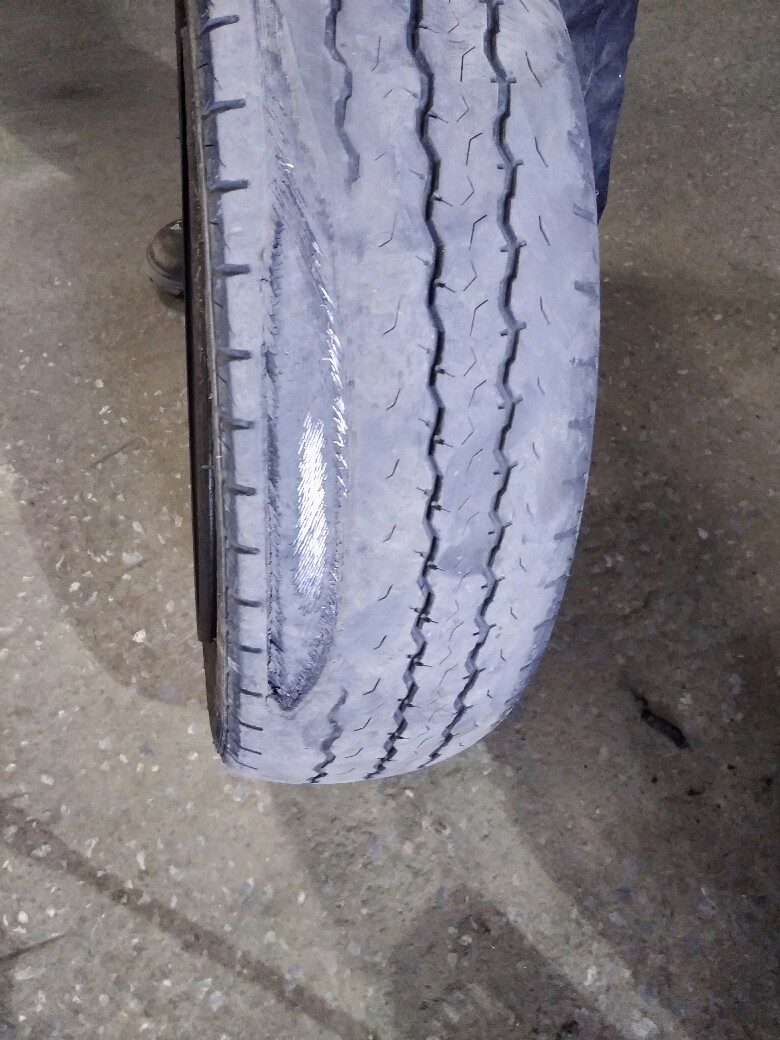 I'm pretty sure the boulder strewn parking at Athenry Agricultural Show was the culprit. Still €65 for a new tyre and we're on our way. Took the same N road and hoped the Garda weren't around as we ignored the speed limit to test it. All fixed. However this is rural Ireland and neither the mechanic nor I thought to cover my driver's seat before his earlier test drive. 8 years of keeping it relatively clean gone in one morning.

Mind you I tipped the mechanic (it's the way I was brought up) and he was over the moon. Apparently he can get the most unpleasant jobs (his words, surprisingly more Anglo-Saxon than Gaelic, can't be repeated here) and never a Euro of thanks.

Can you guess what this is? 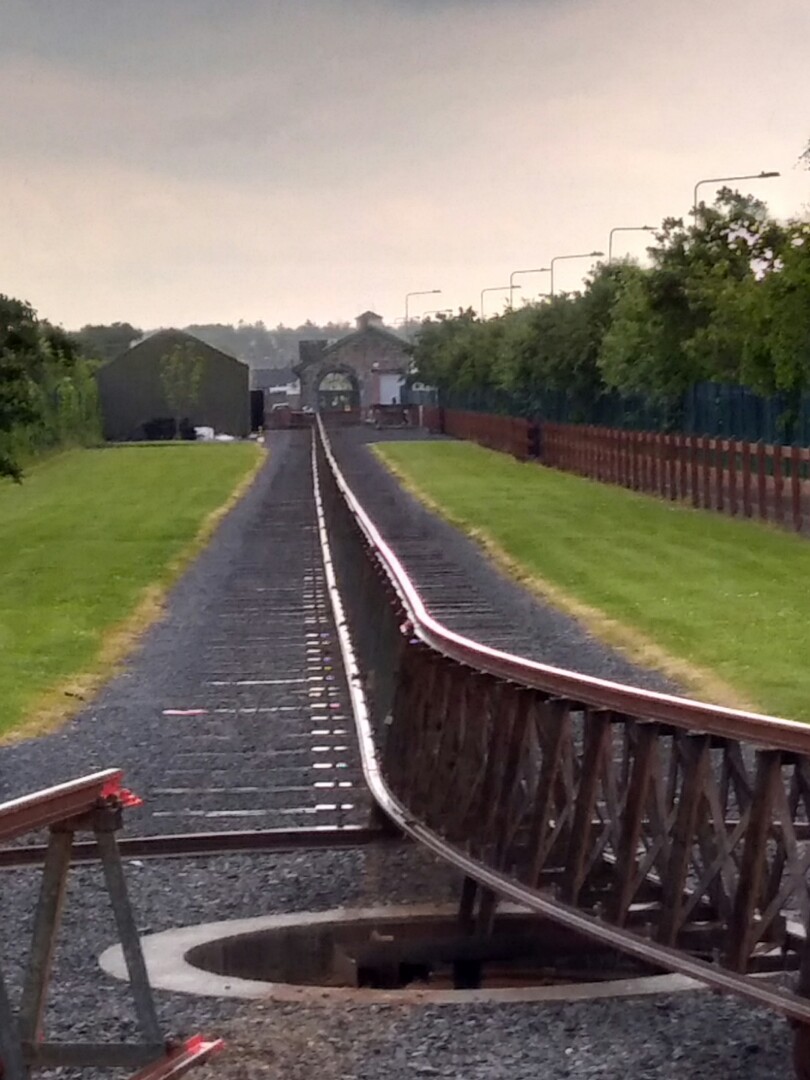 The cover picture probably gave it away. If not, here's another picture of the engine that runs along it 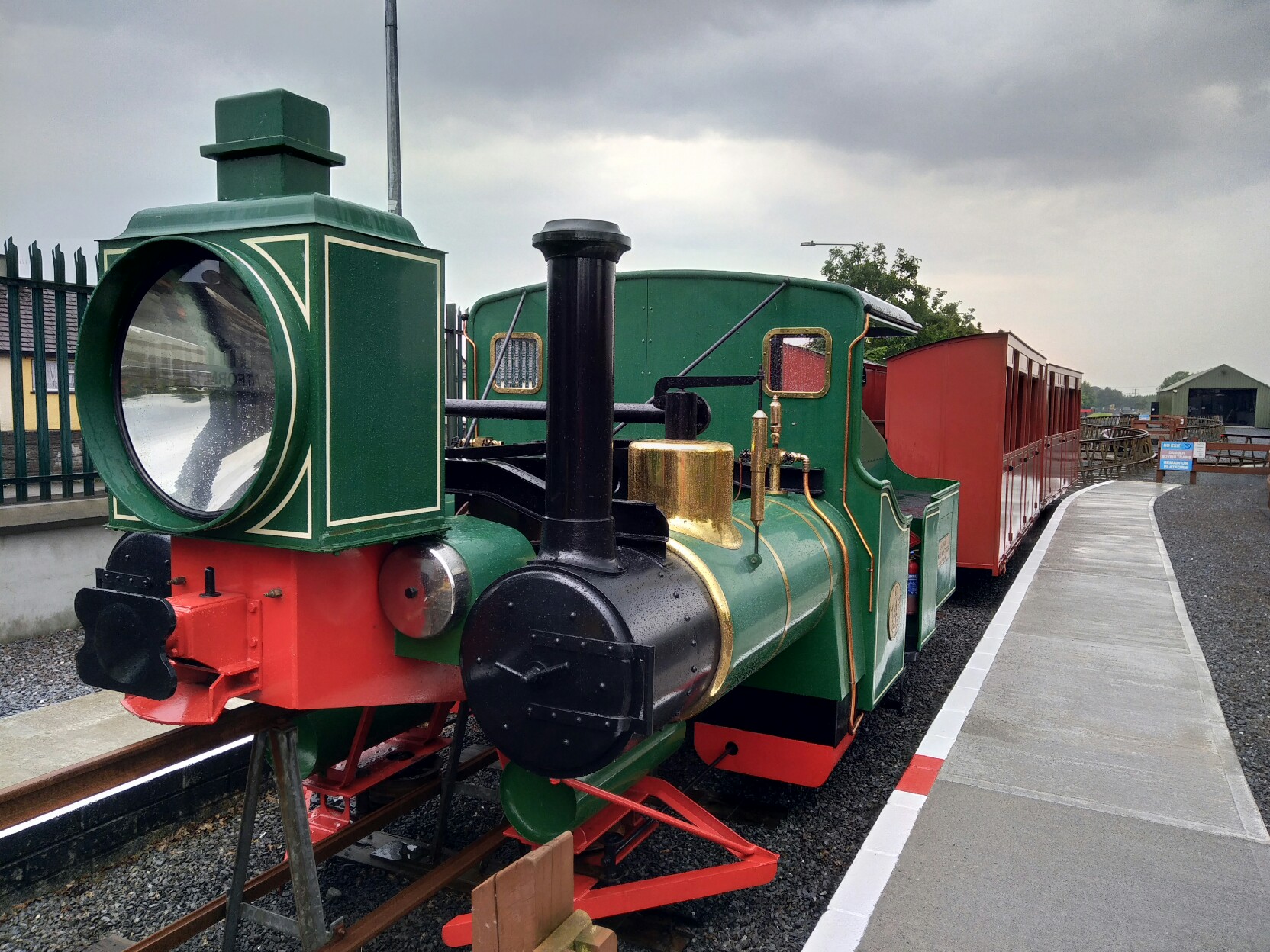 Yep, it's a monorail. The only existing example of a Lartique Steam Monorail in the world. In fact, the only commercial example ever built.

For the train buffs, here's a picture looking down on the single drive wheels. 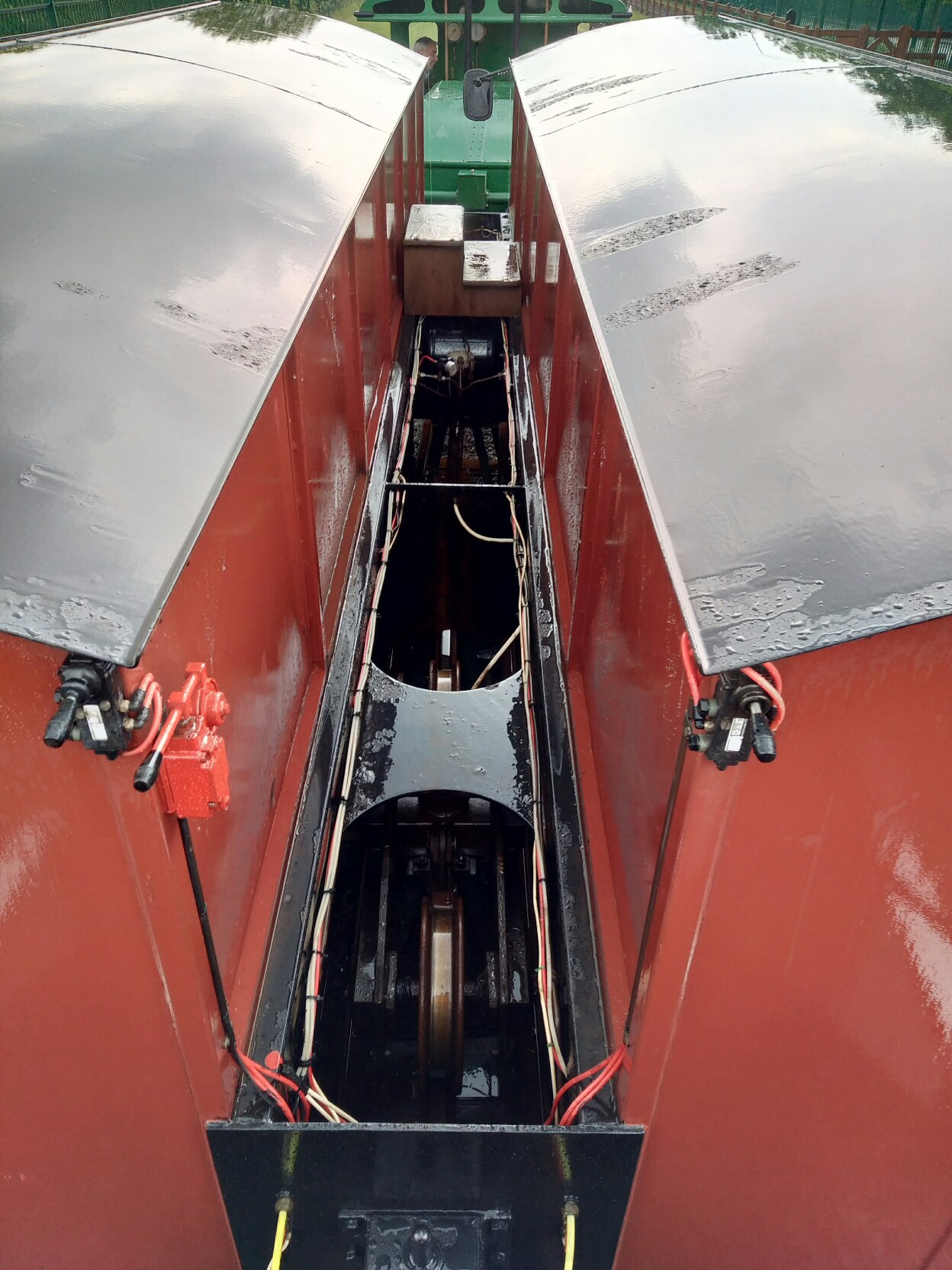 How did I get that shot? Being a monorail the train has to be balanced so pairs of carriages hang either side of the central track. Loads have to be balanced, with the same weight on either side. To facilitate this there is a small bridge on the train to allow passengers (with or without their cows, in the old days) to reach the carriages furthest from the platform.

The monorail ran 9 miles from Listowel to Ballybunion and was in operation from 1888 to 1924. Today's restoration runs a significantly shorter distance, just a couple of hundred metres or so. But it does include several sections of track to allow the locomotive to be rotated on a turntable and also hand operated sections to allow track switching. Moving the locomotive so it is now pulling the rear carriage rather than the front consists of a series of shunting operations to bring the loco around the carriages as well as a turntable rotation of the loco itself 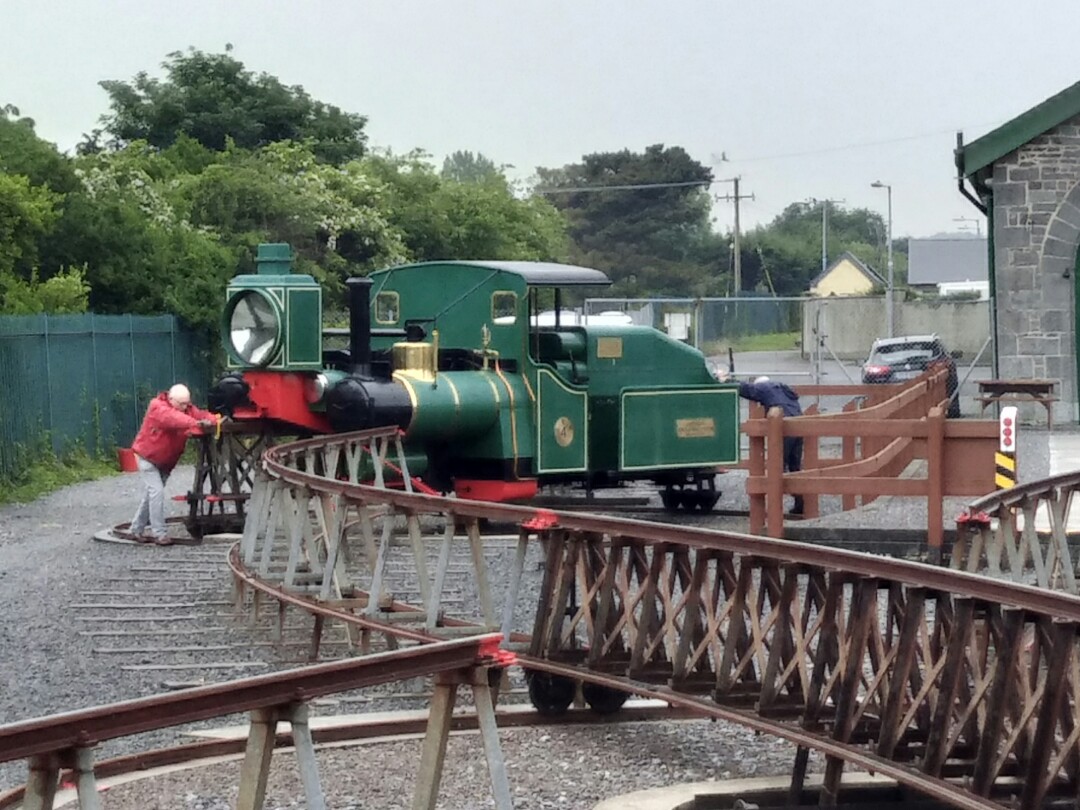 Yes, everything is hand operated including pushing the turntable round.

To be honest, we knew nothing of this little gem and really only stopped to see if we could use their toilets. But they were just about to run the train for another couple of people so we thought "what the heck" and shelled out our €5 each. I'm glad we did, like so many of these labours of love the staff's enthusiasm was infectious. As we boarded the train it started to rain and then lashed it down. We hunkered down in a shelter at the far end of the track (just a couple of hundred metres away, remember?) until it eased off enough for a very apologetic guard to provide a towel for the now wet seats. And they postponed the "manoeuvres".

This place really is a delight. The museum has turn of the (19th) century footage of the railway in operation, a model of how it interacted with the mainline, and working displays of the various bridges and rotating track sections. It kept us engrossed long enough for the rain to ease off and we could be demonstrated the complex set of manoeuvres required to run the engine round. More than you might expect!

I'm not a train buff but such was the pure joy exuded by these enthusiasts playing with their lifesize train set that I was even moved to make a donation.

And, yes, today's cover picture features me blowing the whistle!!!! Does it get more exciting than that.

We hadn't realised but this is Writers' Week in Listowel, the biggest literary event in Ireland. It would be good to stay and perhaps take in a talk or two but sadly nowhere seems to offer overnighting.

So onwards to Tralee. Now we know a song about Tralee, don't we boys and girls?

Today's 63 miles reflects both the detour into Rathkeale and the fact we decided to forgo the fast N road from Rathkeale to Tralee in favour of the slower coastal option. 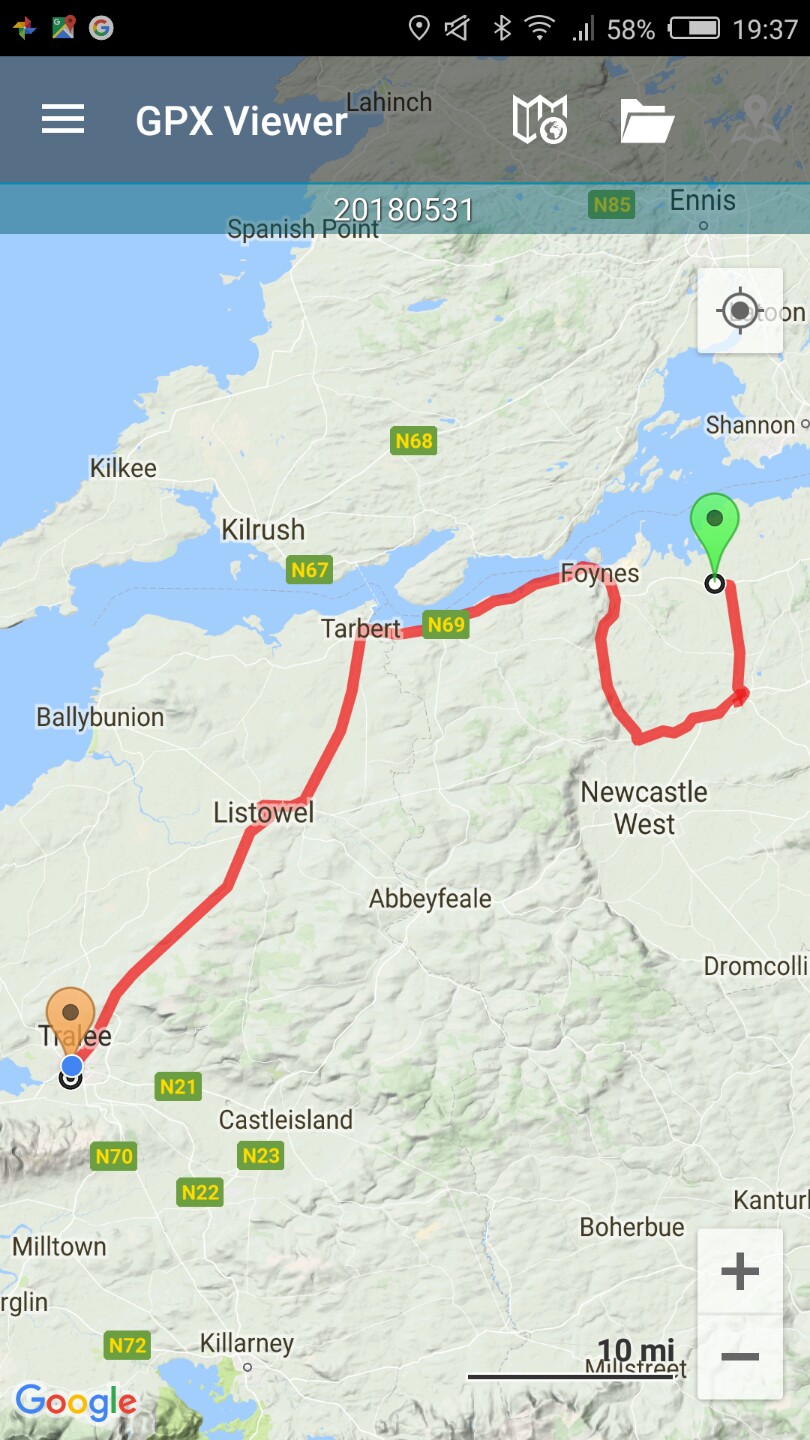 She was lovely and fair as the rose of the summer, Yet 'twas not her beauty alone that won me; Oh no, 'twas the truth in her eyes ever dawning, That made me

Moving on from Corofin we stop just down the road in Ennis, the county town of Clare. Wonderful narrow streets and local shops. We've come for the county museum though because it has