A simple plan today. Find the park and climb Arthur's Seat. Ah, OK it is the other side of the city so alight at Prince's Street, walk along it, up North Bridge along part of the Royal Mile to Holyrood, round the corner and I'm there. Easy!

The Royal Mile? What is all that about. I thought there was a recession on so how can so many shops all selling exactly the same acrylic ersatz tartan rugs, or made-in-China plastic Highland cattle, or alloy sgian dubhs or overpriced whisky actually survive check by jowl for a whole mile? Beyond ma ken.

Fortunately the closer to Holyrood the less densely packed the tat shops. Now the new parliament building itself is one of the few outstanding pieces of architecture in Edinburgh. Apparently designed to look like a couple of upturned boats, I assume the metaphor is peacefully on the beach as opposed to capsized, it is a building worthy of a nation's Capitol.

And it's open to the public. Now I'm with Billy Connelly that as you age you should never pass a toilet without using it. And the parliament building almost certainly had toilets. So I pass they pro-Palestine demonstration, doffing my hat as a mark of respect for the protesters and enter. Ah I'd forgotten security, do I need a pee bad enough to remove and refit my belt?

Inside there is a chance to actually go into the gallery and watch a debate. It's free I don't need a pee quite yet, so why not. Had I not seen televised accounts of the Westminster parliament I would have been surprised by how few MPs were in the chamber but the debate itself was most interesting. Someone was proposing a ban on wild animal snares and spoken both passionately and coherently why such a ban was moral and right. Then an opposing speaker spouted forth on why snares were an essential part of wildlife management. He was neither as convincing nor passionate and seemed to be almost trotting out a party line. A third speaker, a poor one, sufficiently poor that several gallery members, self included walked out.

Nice toilets and not a bad little shop of you want a bottle of whisky or wine with a Scottish Parliament label. Mind you they also had an interesting selection of books dealing with Brexit issues. Unsurprisingly all were pro-Europe.

So there in front of me are Salisbury Crags and Arthur's Seat. 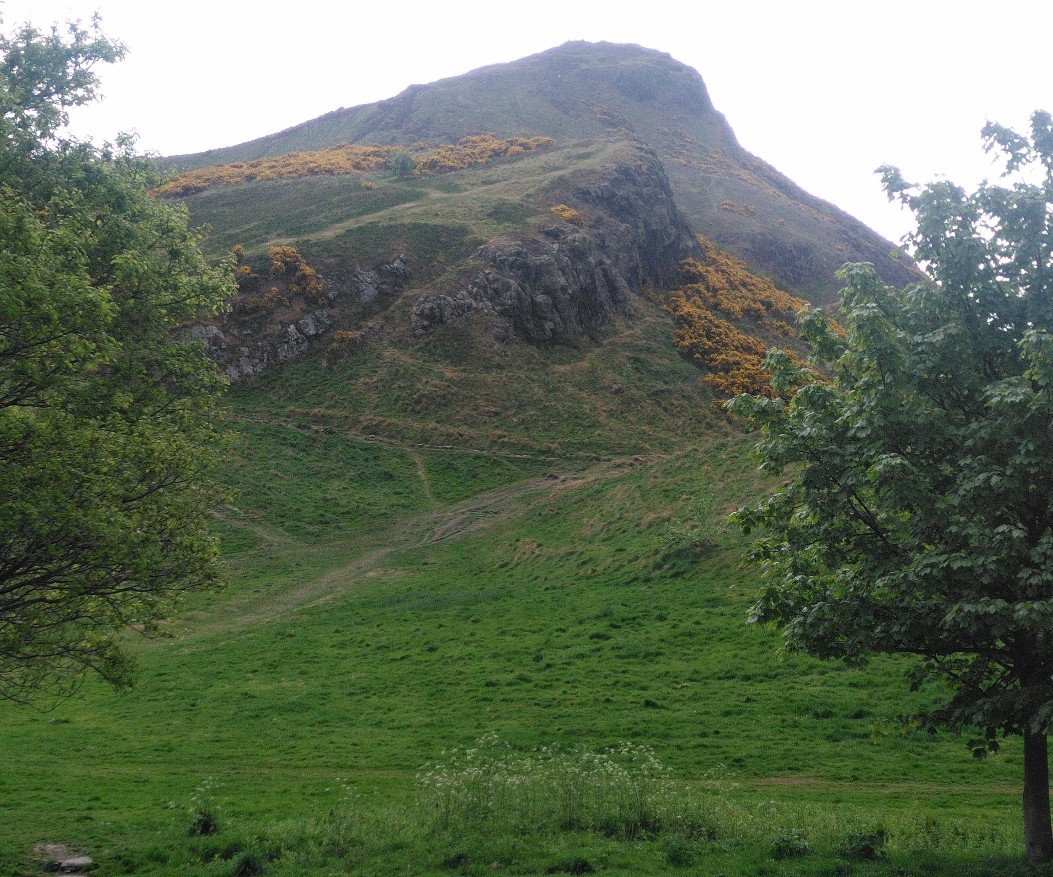 Salisbury Crags are an impressive 175m cliff face with Arthur's Seat towering another 75m above them. Actually part of an inactive volcano just a stone's throw from Holyrood and in the middle of the city. There are several paths up to Arthur's Seat, I chose one that looks to be the main route, good path all the way to the top. Yeah! Not so, it soon becomes more of a well trodden route than a path, then disappears completely for sections, with bits of simple bouldering needing to take you back on the path which suddenly now is 20m away.

I'm not fit, it is steep. I have to rest every hundred metres, every 50 metres. I refuse to let the rest stops get less than 30m and set micro-targets: just to that big gorse bush, just to that odd coloured boulder. Joggers whistle past me and I mutter "Respect" to hide back the envy. Still slowly and surely and as the going gets tough it becomes easier. Once you are clambering on boulders you are dragging your body upwards at a slower rate and it's not so tiring; each boulder is its own micro-stop so I no longer need to deliberately stop. I'm there!!! 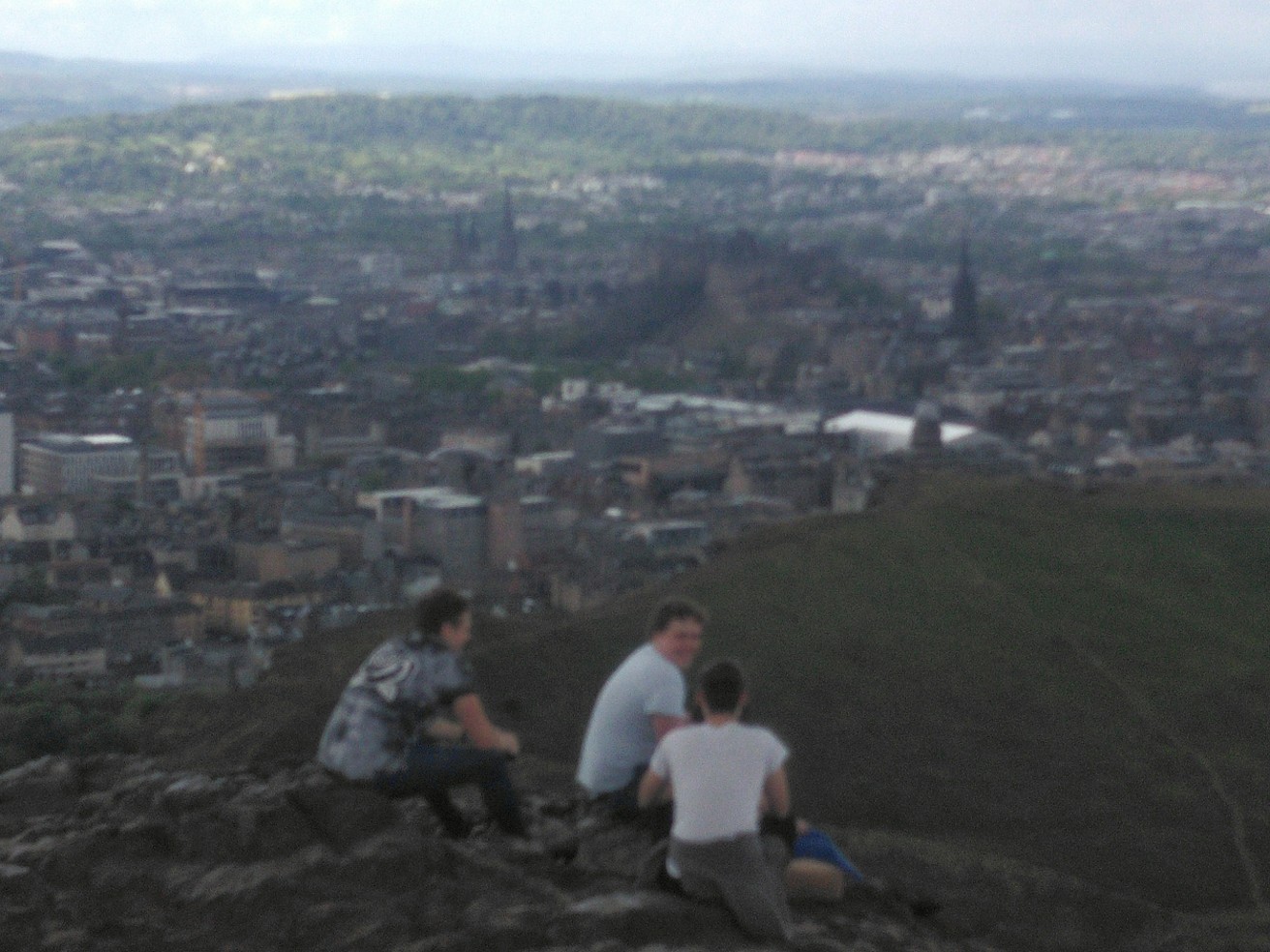 Descending over the well trodden, well rounded, slippery as hell boulders is interesting! After 50m descent I spot a grass track I'd not seen in the way up. No rocks just an even steep grass slope. Got to be easier, wish I'd seen this on the way up. Trouble is when I hit the road at the bottom it's not the road I came in on but an internal road several metres higher and almost a mile further so a much, much longer walk back to base.

Serendipity. That extra mile means I waive back at Hollywood 20 minutes later than I might have done to find the road close for a dress rehearsal of the state opening of parliament. Impressive it was too. 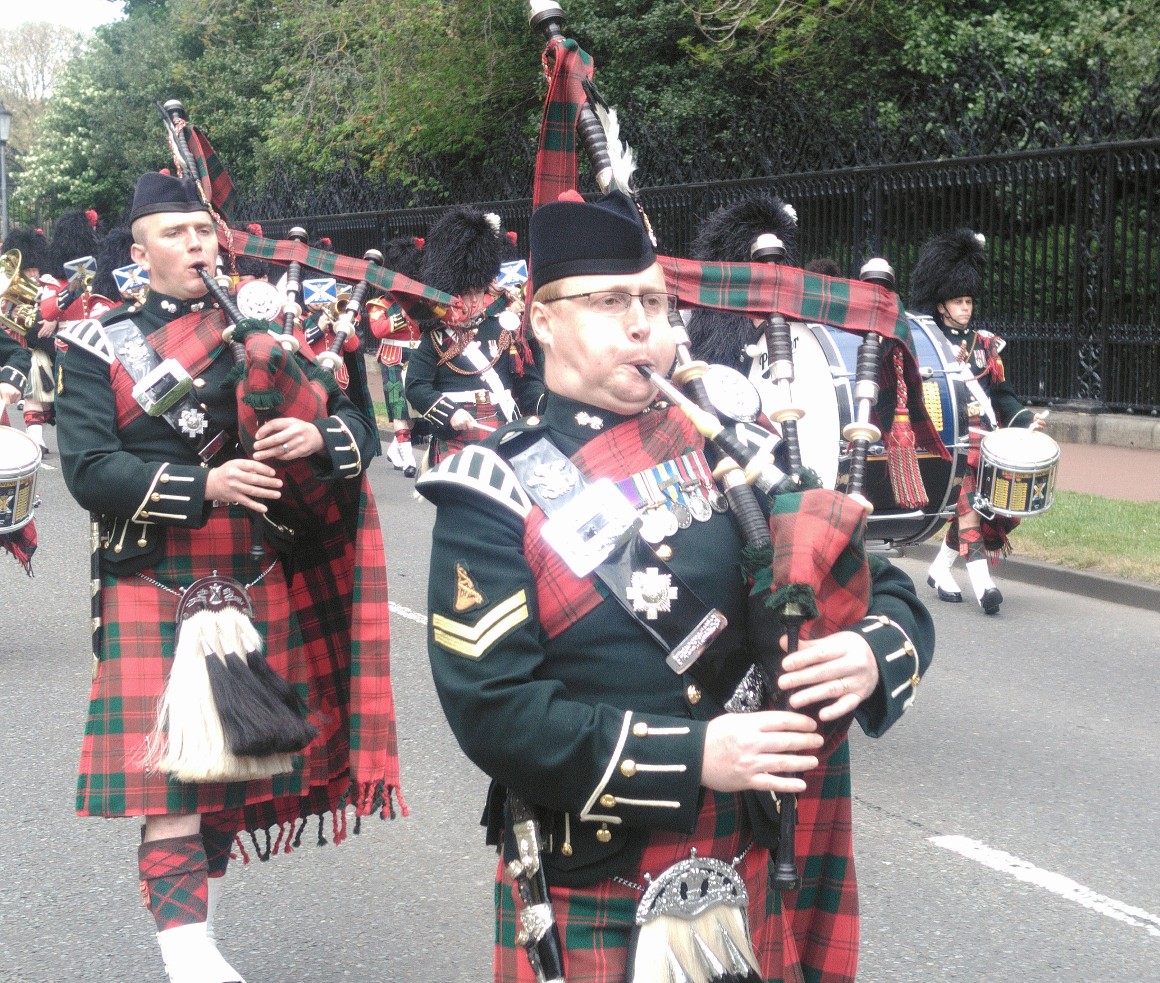 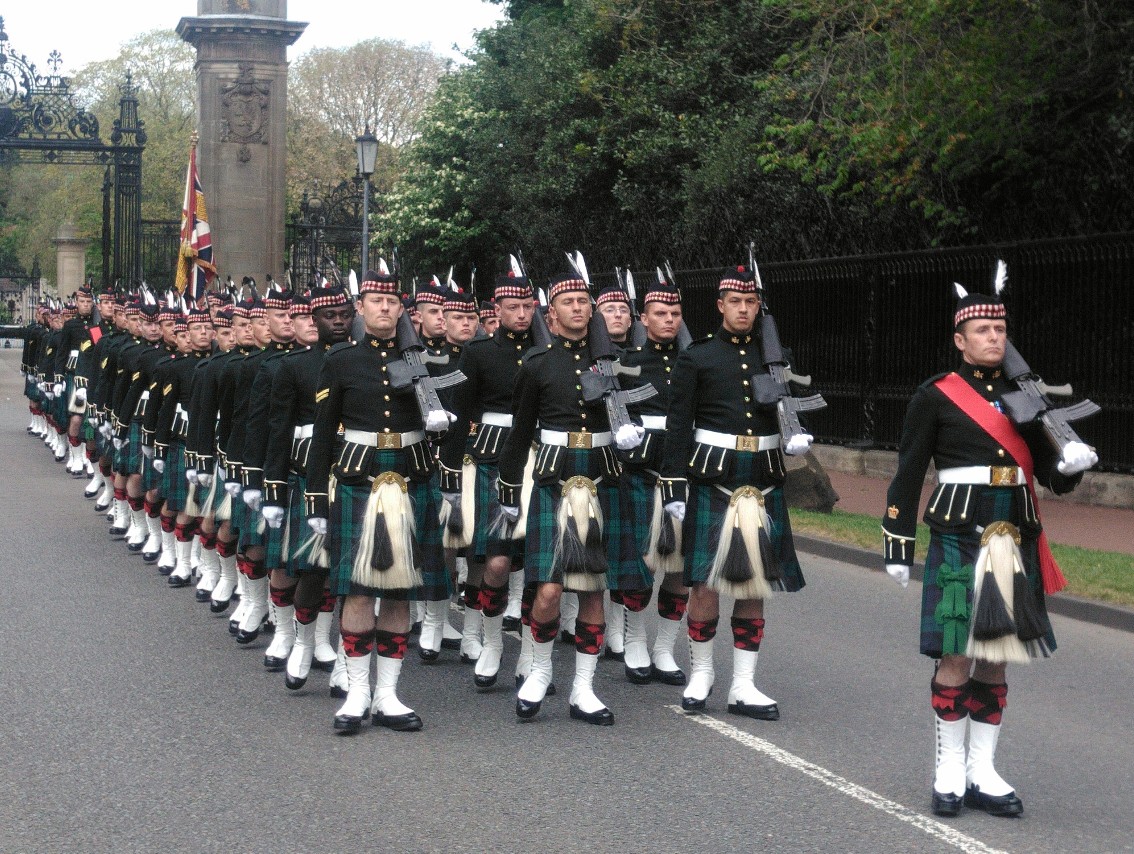 Beer o'clock and I made the mistake of ordering a pint at a CAMRA recommended pub before checking the price list. £4.50 for a very ordinary 4.2% porter! I stay for one and find another recommended pub the other side of town, next to my bus stop. £3.60 for a 5.6% red ale, that's more like it. Not! I had failed to read the small print, this pub doesn't sell its beers by the pint, but by the 2/3 pint. No I know Brexit has caused Toblerone to have bigger gaps between chunks and many other foods to be repackaged in smaller quantities to keep the prices the same; this is the first time I've seen this with beer. Had it been advertised at its actual £5.40 a pint the bar would have sold one less as I turned on my heels!

Reunited with Liz today. Apparently she's expecting to be collected just after 10am, which means I have to be offsite before 9:30. 30 mins to put the van into "on the

Before anyone gets worked up by the title, it is a reference to where the police dismissed us. Leith. As in Sunshine Over and Trainspotting. Firstly Morningside. Morningside is a suburb of S