The whole point of this trip was to visit Friedfrichshafen Hamfest, albeit via the circuitous route involving Switzerland. To non radio amateurs a hamfest is a combination of trade stands, electronics car boot sale and in the case of the larger ones, technical lectures. Of course, the problem with going to foreign events is the lectures are in foreign too, and our everyday german is non-existent so not a hope of understanding a technical lecture. 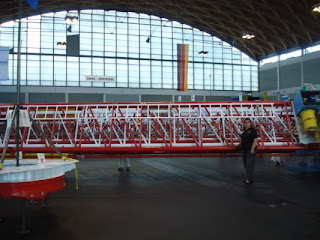 Did I say BIG towers were available for sale?
As for trade stands, the big 3 manufacturers were there: Kenwood, Icom and Yaesu (all Japanese), two very large retailers - the German Wimo and our own Waters & Stanton (who years ago permanently lost our patronage after an off-air remark by one of their senior repair team suggested a less than positive approach to my customer call) and lots of smaller vendors. One big difference between the UK and Europe is that there is much more space in Europe, so more hams have towers for their aerials, so european hamfests have many more manufacturers/retailers of towers, associated hardware, guy ropes, and of course the huge antennas that sit atop of the towers.

The fleamarket was a bit different too - very little 2nd hand modern commercial equipment but LOTS of military gear and valves. Apart from a brand new still in its original sealed wax wrapping paper, 20 year old Czech army morse key we bought almost nothing from the flea market. The trade stands tempted us into a CG3000 automatic antenna tuner - perfect for using a simple 10m vertical wire from a fishing pole attached to the campervan, a drill press for my little hobby drill - ideal for PCBs and several bits'n'bobs'n'connectors. 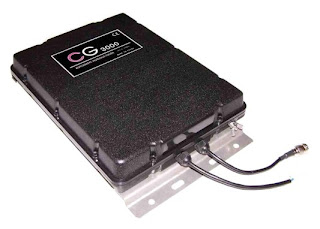 Looks boring, but useful for portable radio from the Romahome
The euro/sterling rate didn't lend to many bargains - for example a brand new TS-590s is €1699 on Wimo's website = £1543 using my credit card's exchange rate. Compare that with Nevada's current price of £1329! I had planned to buy the voice card for the TS-590 but it is cheaper in the UK. On the other hand Wimo had a show special of €40 off the already less than euro-for-sterling price of €275 on the CG3000 that I bought. That gave me a price of £213.50 which does compare well with Nevada's £296.12 and I feel I got a good deal. The deal on the ATU was a rarity though and we only bought bits that we felt would be hard to source in the UK. 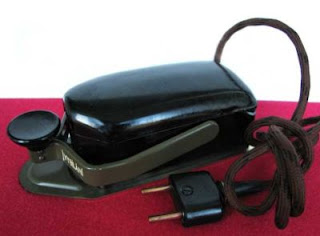 The flea market led to the new morse key, a bargain at €5. I really wanted some nixie tubes but they were on boards and a few had been cracked so to guarantee I had enough to make a clock I would have had to pay just a little more than I wanted. A pity, in better condition I would have had confidence to buy fewer and hence they would have been affordable.

However rallies and hamfests are not all about buying, as well as the social side (see separate blog entry) there is the opportunity to a) increase your knowledge (index of possibilities, as I like to call it) and b) ogle those objects of lust that are either beyond the price range or not currently available. 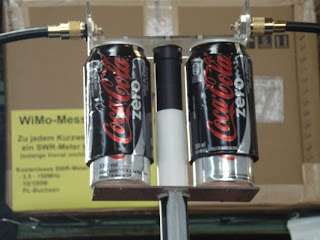 Several antenna bits certainly did give us some more thoughts and ideas and I'm not sure if the novel variable capacitor in the photo would really work but it's an interesting idea as is using a syringe and tubing to provide a pneumatically driven variable capacitor.

As for objects of lust: there were only two but both are on my lottery-win list (of couse, I'd have to overcome my principles and actually buy a lottery ticket first!). 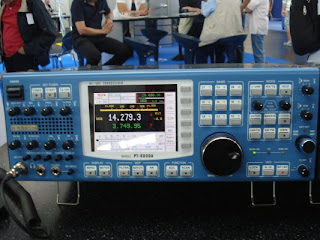 The PT-8000 comes in several colours 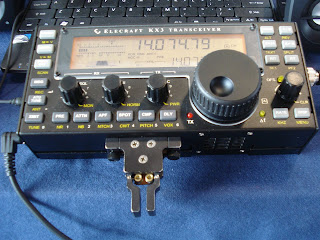 Object of lust! It's so tiny!

The KX3 is expected to be more moderately priced at around $799 (just under £500) and Eric Schwartz told me they we hoping for an end-of-year release. I did ask if he could have it ready for my birthday at the end of Oct and he said they'd try! Imagine ultra-portablity, even better than an FT-817 and features and performance on par with or even better than a K2. Also a brick sized 100W PA as an add-on option. I WANT!

Messe was busy but not overcrowded. The 3 halls did take a good, tiring day to get round and occasionally it was a squeeze to see things but nothing like the UK rallies.

I day say - close! An early wake up call - just what is that hellish loud drone outside the van so early in the morning? It's a Zeppelin! Having left our home