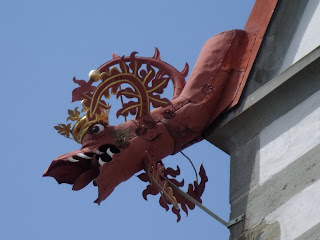 Gargoyle-cum-guttering
and cyclists, and schoolkids.
We decideed to take a train down to Stein am Rhein, a beuatiful fresco painted medieval town at the point where the Rhine becomes Lake Constance (or vice versa). The train was easy enough with the ticket machine having an English option. Being Switzerland the trains ran exactly on time as orchestrated by those wonderful Swiss Railway clocks and the ride initally following bthe river, then veering countrywards before picking it up again was delightful. Until about 4 stops from Stein when a school outing boarded, 2 teachers (although one loooked young enough to be a student) and about 20 hyper-active barely-teenage kids.
The kids also got off at Stein (we were hoping the school trip was onwards to St Gallen) and thronged into the tiny town centre where they joined what must have been the swiss national cycle outing to Stein am Rhein; loads of cyclists throng the streets, cluttering cycles everywhere. So much for the romantic walk amongst 16th century frescos. 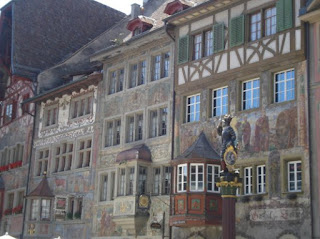 Even more frescos than Schaffhause 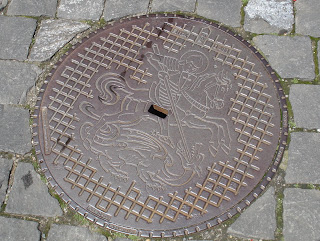 Add caption
Stein is impessive and obviously linked to the George and Dragon story. We noticed dragon gargoyles on buildings in Schaffhause yesterday but the ones on Stein's church were far more impressive.

Also most of the town's manhole covers bear a motif of George slaying the dragon. Pity, he could have picked up a few schoolkids and a couple of cyclists too! Still a pleasant stroll and an interesting frescos, worth the visit although a quieter day might have been preferable.
Being fed up of ruddy tourists we eschewed the altstadt's busy bars and restaurants and dropped into a locals' local on the way back to the train station. Run by what appeared to be a couple of Hells Angels and being a smoking pub (so many are in Switzerland) it was not the obvious choice but we were made most welcome and the landlord and landlady were most amusing mock-dancing to the golden-oldies on the radio.
On back to Schaffhausen (actually Fueurthalen station just outside Schaffhausen is nearer to the campsite and directly opposite the Co-op), restock essential supplies (i.e. alcohol and biscuits) and then unwind onn the banks of the Rhine with a cold glass of Swiss cider. The campsite also has public access to some paddling pools and a small 'beach' on the river so was quite busy with Mums and toddlers, either splashing around or soaking up the sun on this, yet again, beautiful day.

A bonus point for identifying the film that lends provides today's title (hint replace "Neuhausen am Rheinfall" with "Witchita") Impressive, but not on a Niagara scale The Rhine waterfall

... 'cos everyone wants to see the cute little van. This site, particularly we have had stares from almost everyone that passes. This morning the English couple next to us knocked on the door