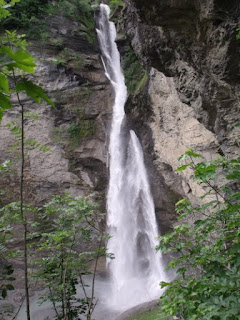 The torrent, swollen by the melting snow, plunges into a tremendous abyss, from which the spray rolls up like the smoke from a burning house. The shaft into which the river hurls itself is an immense chasm, lined by glistening coal-black rock, and narrowing into a creaming, boiling pit of incalculable depth, which brims over and shoots the stream onward over its jagged lip. The long sweep of green water roaring forever down, and the thick flickering curtain of spray hissing forever upward, turn a man giddy with their constant whirl and clamour. We stood near the edge peering down at the gleam of the breaking water far below us against the black rocks, and listening to the half-human shout which came booming up with the spray out of the abyss. [Sir Arthur Conan Doyle, The Final Problem]
_
_ 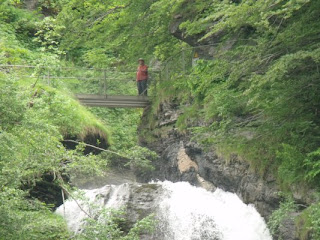 Brian at the top 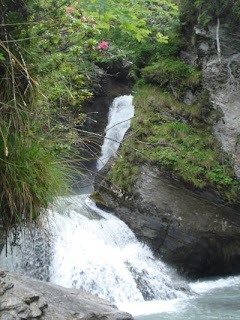 View from the top

At least, some 45 years after first being mesmerised by the Holmes canon Brian gets to visit Meringen and the Rheichenbach falls. Indeed a personal Mecca for someone who held his stag night in The Sherlock Holmes Pub in central London. The falls were indeed impressive as was the funicular railway which took us a goodly way to the top. Brian continued the trek/climb to the top of the falls themselves and then on down the other side in search of the very ledge where Holmes and Moriarty tussled. Sadly, poor signage, intense heat and, let's be honest, a level of unfitness left Brian probably just a hundred steep metres or so short of the haloed spot itself. If he could have been 100% sure that the steep, slippery descent was actually the correct path then he would have risked it.

Meringen also hosts a small but excellent Sherlock Holmes museum in the old Englischer Church. The combined funicular and museum entry is a bargain and the reconstruction of Holmes' living room well worth the visit, even if you are not a fan. A very informative personal audio tour is included which explains the many exhibits. 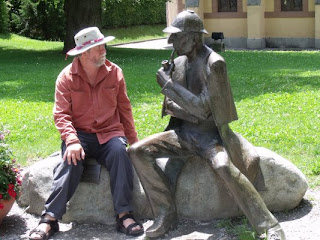 Well, a wet day had to happen sometime. It started raining heavily just after we arrived at Buochs campsite, just SE of Lucern and hasn't really stopped for the last 18 hours. Still,

From Bönigen campsite, across the Brienzer sea Plan is to head down to Bönigen, just a mile or so east of Interlaken for the weekend, but the TCS campsite that takes camping cheques

Two Drifters
—
It is, indeed, a fearful place.
Share this