Well the first sour point of the trip last night. Needing a few essentials we walked a mile or so to a local street shopping area, you know the place, cheap pizza houses, charity shops and a Tescos Metro. Next to Tescos was The Ivor Davies, a Wetherspoon pub (named after Ivor Novello who was born close by) which had some interesting beer, so we thought we’d sit and read for 45 mins over a slow pint. The beers, 2 pints came to the princely sum of £4.35 so I handed over a tenner, 35p in change and 2 50p off CAMRA vouchers, expecting to get £7 returned. On receiving the solitary £2 coin I challenged the barman who insisted I only handed over a fiver. Now I hadn’t looked carefully, the transaction was done automatically and it could have been a fiver but I had a niggling suspicion it was, indeed, a tenner. Returning to the van I checked my afternoon’s accounts - easy since my wallet was bare towards the end of the afternoon until a hole-in-the-wall kindly refilled it. So I simply needed to make an account of the 3 transactions made since the bank visit, tally my wallet and change, and lo, my accounts were £5 down. I have written to Wetherspoon and enquire on their policy of disputing payment amount. Of course I should have swiped a contactless card or, at the very least, not confused the admittedly stressed and busy barman by adding the appropriate change to make his till management easier.

Now, we’re enjoying Cardiff more than we thought and due to leave tomorrow, so I popped into reception and wondered if we could stay an extra couple of nights. No, the’re fully booked on Saturday night but we could stay one more. We discussed options and easiest was for me to move pitches this morning. Little did I know that the new pitch is opposite the building work. No problem, they are quiet now and anyway we are not in the van during working hours. No, the problem was the work vans were parked on front of my new pitch making reversing even a small van like ours difficult. I was doing so well too - until a sickening crunch of shattering plastic rent the air. Oh ****!!! I’d taken out one of the site lighting bollards, only a metre tall and totally invisible to my reversing manoeuvre. It’s weird - I parked, inspected the bollard, tried to effect a temporary fix, went and reported it and then, and, only then did I even think to consider any damage done to the van. Fortunately the bollard was ‘protected’ by a tyre and I had hit this with my wheel and driven it into the bollard, so the van itself appears totally unscathed (although warrants further inspection after breakfast). Conan the destroyer indeed! :-(

Ladies and Gentlemen - The Beer Festival. Many gently reader (actually I suspect few, rather than many) may not have been to a beer festival and may, with English football supporters in mind, consider it an opportunity to drink copious quantities of beer in order to reach that delicate tipping point just prior to wanton vandalism turning into drunken oblivion. Not so, not so. If wine can have connoisseurs who delicately seek out nuances of flavour then why should beer be treated with less respect. A beer festival is more like a train spotting meet, with anoraked individuals cross-referencing and crossing-off beers from a lifetime taste list. abvs (alcohol by volume) are compared, and tasting lists compiled; too strong a beer too soon ruins the critical ability to compare and contrast, to strong a flavour and the palette is shot for a goodly while. The serious drinkers even have water to cleanse the palette ready to give the next beer the same even playing-field of refreshed taste-buds as its predecessor. Oh and then there’s always the group in the corner trying to get pissed as quickly and cheaply as possible. 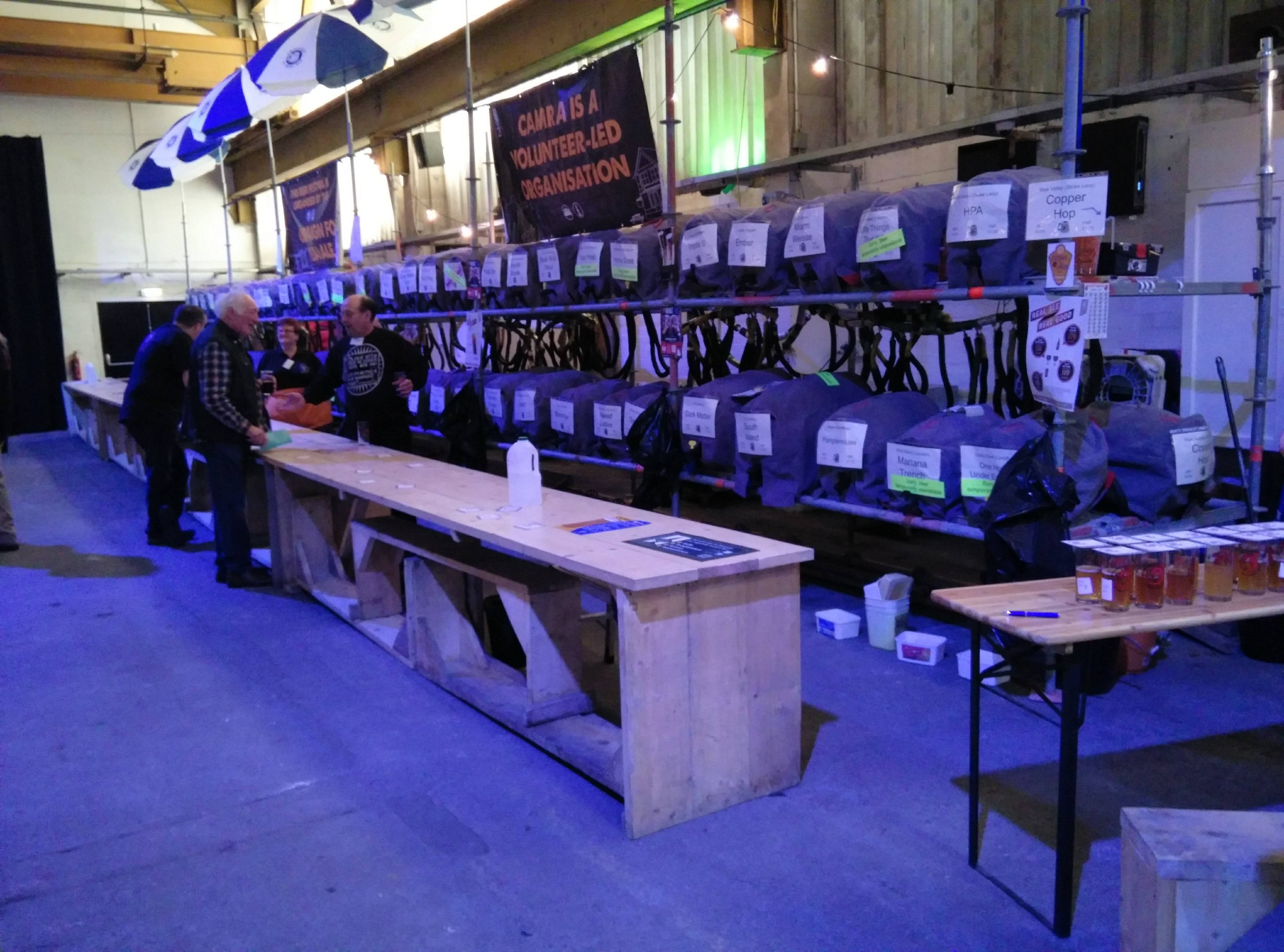 The Great Welsh Beer festival is held in The Depot. With a typical Welsh economy of description The Depot turns out to be a converted depot, with girders and hoists still across the high ceiling. Still, in concession to the club scene someone has stuck some loos in and a couple of small bars - and, of course, for the beer festival row on row of beer stillage, some 140 different beers and 60 different ciders.The focus is, as it should be, on Welsh products but, in order to give the locals a taste of something exotic there is a special secondary focus on beers from London and ciders from Kent and all points east. The club dance-floor has been decked out with loads of German beer-hall style bench-tables, although the closest to the Welsh equivalent to lederhosen was several Sealed Knot members dressed as 16th century Royalists (I never did find quite why!)

It was quiet when we got there at 12 and still lightly populated when we left 5 hours later. We’d sample some 13 (half-pints) of the 140 beers between us - about 3 and a half pints each. As usual we had focused on dark beers, mainly milds, stouts and porters and both of us had deliberately chosen weaker (<4.5% abv) beers although I did intersperse a strongish barley wine into the mix and we finished with a crazy 10% abv black ipa which was deceptive. I’m glad we only had a half pint shared, it was the sort of beer that tasted significantly more innocuous than its strength belied and a couple of pints could have easily slipped down, just prior to the drinker doing the same thing!

I haven’t mentioned the cider.
'Cider, cider, the distillation of the forbidden fruit of Paradise. Full of the true, the blushfull hippocrene, with beaded bubble winking at the brim and purple stained mouth. Cider, loosens my libido, transports me into realms of ethereal delights and blows my cosmic mind - Yeah, wow, too much 1

Rule #1 don’t drink cider at beer festivals. Cider is acidic and once you start drinking cider your beer palette is shot and you can only really, objectively, appreciate other ciders. Now, in the olden days (i.e. about 5 years ago before cider became all trendy and teenagerified) cider was a strong drink. Few ciders were under 6% abv, many over 7% and more than a few over 8% - i.e. one pint of cider had the same alcohol content of 2 pints of beer. Not good! Add to that that cider contains an alkaloid substance, still not completely isolated and identified by bio-chemists, that specifically targets the neuro-transmitters controlling the thigh muscles rendering such muscles inoperative after a surprisingly small dosage. So the phrase “pissed, legless” tends to be applied to those folk who ignore Rule #1. Still nature has evolved compensatory mechanisms and another still unidentified compound in cider induces a rosy glow in the cheeks and, in particular nose; consequently those folk who have reached an advanced state of cider-induced inebriation have an autonomic response mechanism designed by nature to indicate “I am unable to coordinate movement in my leg muscles, please help me” but unfortunately millennia of evolution have honed observers’ responses to “He’s obviously off his trolley, give him a wide berth”.

Still these days cider is trendy and yooothful and has replaced alcopops as the boire-de-jour of the trendy set. Never one to miss a quick buck the producers have watered the stuff down to 4-4.5%, bunged in a load of sweeteners and ersatz fruit flavourings and quadrupled the price. These are not found at beer festivals! But, sadly, some of the real, proper cider producers now produce low alcohol (i.e. <6%abv) ciders and these do find their way to beer festivals. So, if you are very careful, choose purely by abv sorted in ascending order and only sample a few, it is possible, just possible, in theory, to be able to breach Rule 1 and still stagger home, or at least to someone’s home!

So that was the day, three and a half pints of not too strong beer over a 5 hour period definitely constitutes sensible drinking. Even adding a further slow pint (over another couple of hours and coupled with a large pub dinner) we were barely in any recognisable state of inebriation as we wended our way back to the van. But then again I wouldn’t have written all this drivel had I really been sober!

One last beer related photo - an innovative use of beer barrels (in the Hopbunker bar, Cardiff) 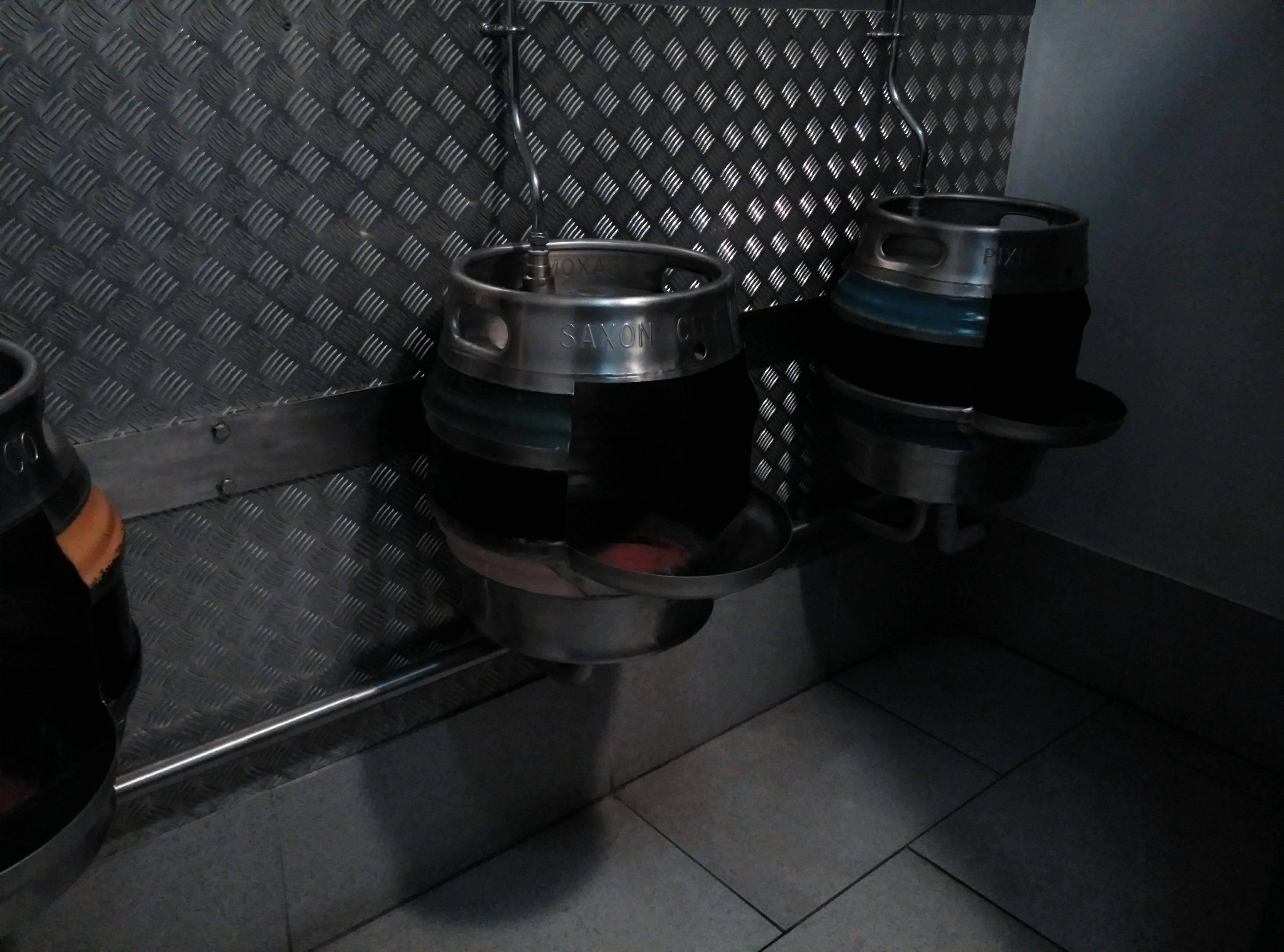 Yes - they are urinals! Most ingenious.

A comment on yesterday’s scribblings was that a reader was unaware of alcopops. Some history of alcohol - the reason CAMRA was formed back in in the early 70s was that brewers

I’d like to complain! The campsite is having some work done today and I was roused from my slumbers by the noise of a concrete mixer and pump not too far away.